Diagnosis: In the Galápagos this 20 mm wingspan species is most similar to Pilocrocis ramentalis Lederer  ( Figs 46, 47View Figs 41 - 48) in wing colour and markings, but P. ramentalis  is slightly larger (21-29 mm) and its forewing postmedian line usually doesn’t reach the costa and is straight or slightly concave in the radial sector; its discal spot, a small dash or lunule, is bordered with black anteriorly whereas the discal spot of C. zoilusalis  is bigger, rounded, and with black dashes on both sides but more conspicuously so posteriorly ( Figs 10, 11View Figs 9 - 16). It resembles also Herpetogramma phaeopteralis (Guenée)  ( Figs 20, 21View Figs 17 - 24) and Rhectocraspeda periusalis (Walker)  ( Figs 49, 50View Figs 49 - 56) in size and wing background colour, but the markings of these species are darker when apparent, whereas those of C. zoilusalis  are white to cream. It is also similar to the most poorly marked specimens of Hymenia perspectalis (Hübner, 1796)  ( Figs 22, 23View Figs 17 - 24), but in the latter there is a distinctive white band in the hindwing with a short bilobed projection medially. Microthyris anormalis (Guenée)  ( Fig. 36View Figs 33 - 40) is also similar, but this species is larger and its forewing is apically pointed and with five or six white spots along the submedian (one spot on posterior side medially) and postmedian (4-5 spots on anterior side in radial and median sectors) dark lines.

Biology: Known hosts are Wedelia trilobata  (L.) Hitchc. and Xanthium strumarium  L. ( Asteraceae  ) ( Heppner, 2003). Neither of these plant species (or genera) are known from the Galápagos (Jaramillo Díaz & Guézou, 2015). The species is not recorded in Robinson et al. (2014). I collected the single available specimen from the Galápagos on 22 February 2005 at a site where garbage was dumped in the past.

Distribution: Described from Honduras, this species is widely distributed in the West Indies as well as Central and South America ( BMNH and MHNG specimens). Heppner (2003) records it from Florida and Texas ( USA) as well as Mexico.

Remarks: The only known Galápagos specimen was determined by Alma Solis based on a photograph sent to her. It is not illustrated here because of its poor condition. The male genitalia illustrated here ( Fig. 97View Figs 95 - 97) are those of the Galápagos specimen, but Figs 10, 11View Figs 9 - 16, and 143 are specimens collected in Brazil, Bahía, Camacan, Reserva Serra Bonita. The  species is recorded here from the Galápagos for the first time. 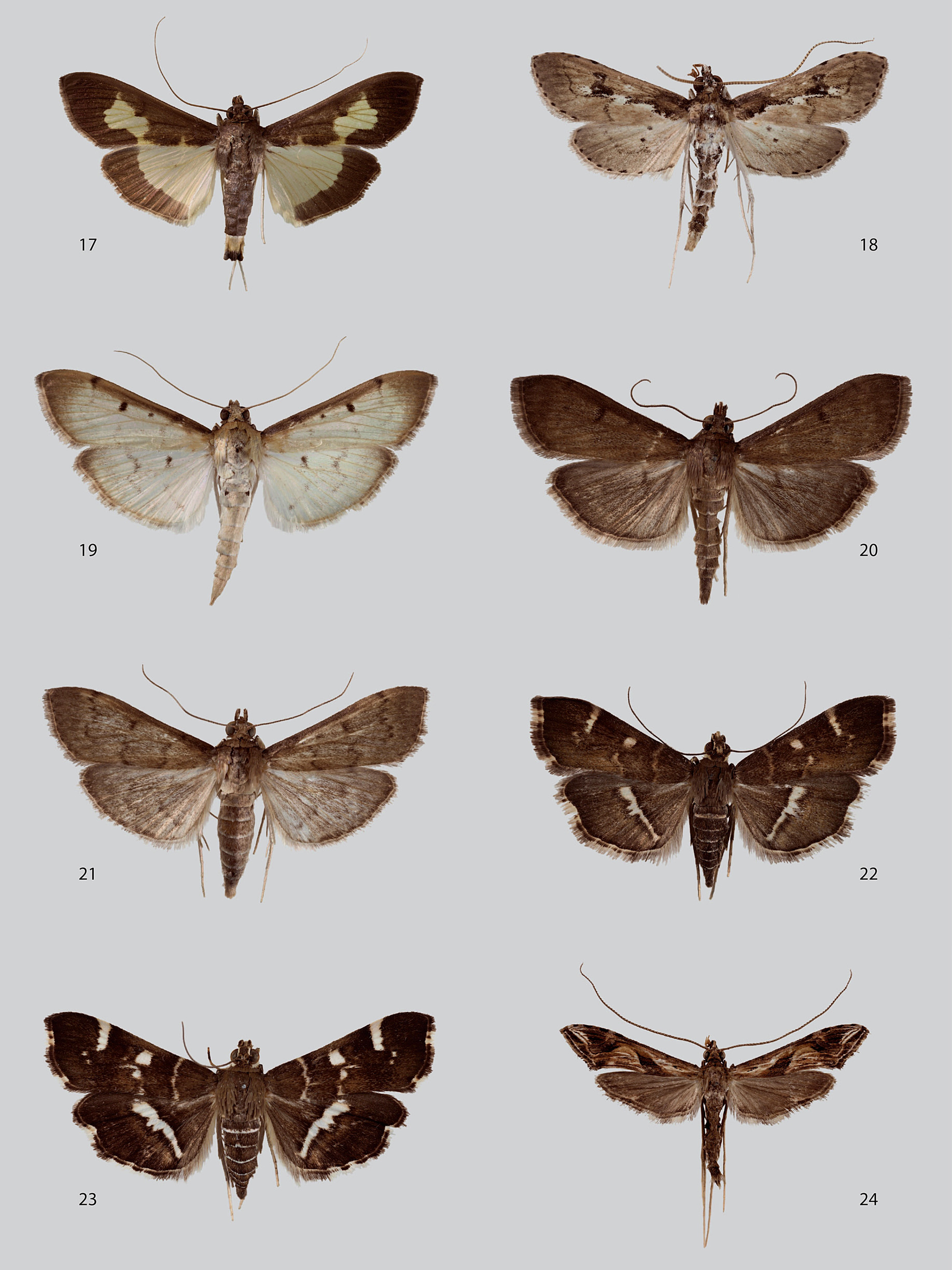