Description. Colonies upright, relatively flaccid when out of liquid, up to 5 cm high, arising from branched, rhizoid hydrorhiza spreading over the substrate; stolonal fibers relatively thin, tortuous, some of them enmeshing the main stem for 2–5 mm above the substrate; stem monosiphonic, generally unbranched, comparatively thicker than the stolonal fibers, arising singly or as a few, basally adjacent tubes from the hydrorhiza; perisarc smooth, rather thick, pale-brown. Proximal part of stems irregularly divided into a series of short internodes by means of transverse nodes; internodes bearing nematothecae in longitudinal rows. Remainder of stem regularly divided into long, slightly geniculate internodes by means of transverse, though not deeply-incised, nodes; each internode with a distal bulge of perisarc, a latero-distal apophysis, and several, more or less distinct, longitudinal rows of nematothecae, each row with 2–4 nematothecae per internode; distally, apparently only 2 lateral rows of nematothecae subsist. Stem apophyses short, alternate along the stem, given off at an angle of 55–60°, distal node transverse; two consecutive stem apophyses (left and right) are simultaneously shifted on to the “anterior” side of the colony, while the two preceding and two subsequent ones are shifted on to the “posterior” side; more distally on the stem, the apophyses display a tendency to form verticillate series of 3, giving the colony a decidedly three-dimensional appearance. Each stem apophysis generally bears an up to 14 mm long hydrocladia-bearing branch; occasionally, a secondary stem replaces a hydrocladia-bearing branch, or a hydrocladia-bearing branch transforms itself, either proximally or more distally, into a secondary stem. Hydrocladia-bearing branches divided into moderately-long, slightly geniculate internodes, by means of transverse nodes slanting in alternate directions; each internode with a distal bulge of perisarc, a latero-distal apophysis supporting a cladium, and generally 2, occasionally 1, nematothecae on opposite side; cladial apophyses given off at an angle of 30–35° with the longitudinal axis of their corresponding internodes; apophyses alternate along the branch, the two rows coplanar; each apophysis moderately long, with 2 axillar nematothecae on each side, a conspicuous conical mamelon (with apical, rounded aperture) on one side, and an unpaired nematotheca on side opposite to mamelon; distal node transverse; up to 32 hydrocladia per branch. Cladia divided by means of transverse nodes into a unique sequence comprising a nematothecate internode, followed by a hydrothecate internode, the latter ending in an appendage composed exclusively of nematothecate internodes; first internode moderately long, with proximal node transverse and distal node oblique, with a proximal, internal perisarc ridge and a nematotheca on its upper side; hydrothecate internode moderately long, with proximal oblique node and distal transverse node, with a proximal, internal perisarcal ridge, a distally-placed hydrotheca and its complement of 3 nematothecae: one mesial, well below its base, and a pair of laterals borne on indistinct apophyses; apertures of all hydrothecae of a colony facing away with respect to the longitudinal axis of the stem; distal part of hydrocladium with a succession of up to 20, comparatively slender internodes of varied length, with highly articulated joints, each generally bearing a nematotheca on its middle portion, nematothecae pointing alternately left and right along this sequence; only the hydrothecae of the proximal most cladia are provided with these appendages. Hydrotheca cup-shaped and quite shallow, nearly fully adnate, leaving only a small portion of its adaxial wall free from the corresponding internode; a belt of desmocytes slightly above base; abaxial wall distinctly flaring, aperture circular, slightly tilted outwards, rim entire. All nematothecae of the colony inverted-conical, bithalamic and movable, with deep basal chamber and relatively shallow upper chamber; margin of upper chamber entire in the lateral nematothecae and those belonging to the whip-like appendage, but slightly lowered on adaxial side in all other nematothecae. Hydranths too large to be accommodated into their corresponding hydrothecae, with a whorl of 16–18 filiform tentacles. Colonies dioecious; gonothecae arising singly or in pairs from axils of apophyses supporting the branches and hydrocladia; broadly piriform, tapering basally into indistinct, laterally-set pedicel, conferring them an asymmetrical aspect; male slightly more elongate and slenderer than their female counterparts; distal end truncate, apical perisarc distinctly inwardly rolled, aperture circular, closed by flimsy, convex operculum that, when opened, often remains attached to one side of the aperture upon the release of the gametes. Cnidome: banana-shaped microbasic mastigophores, (6.0–6.2) × (2.0–2.2) µm, in the tentacles; pseudostenoteles, (12.9–14.0) × (6.4–6.8) µm, in the nematophores, as well as disseminated in the coenosarc. Color in life: stems and proximal parts of branches brown, cladia yellowish.

All literature records accompanied by descriptions and/or illustrations (e.g. Billard 1913; Nutting 1927, as Stechowia armata ; Hirohito 1969, 1995; Rho & Park 1986; Schuchert 2003, 2015) report on the presence of mesial nematothecae on the cladial hydrothecate internodes, suggesting that the species involved was, most probably, S. erecta . Unlike in this hydroid, it is shown that, in the two new species described below, the hydrothecate internodes are devoid of a mesial nematotheca, in addition to other distinguishing characters that are summarized in Table 2 View TABLE 2 .

In contrast to the statement of Billard (1911) regarding the canaliculated nature of its coenosarc, no such situation could be confirmed in the material at hand, in which the coenosarc forms a single tube throughout the stem. 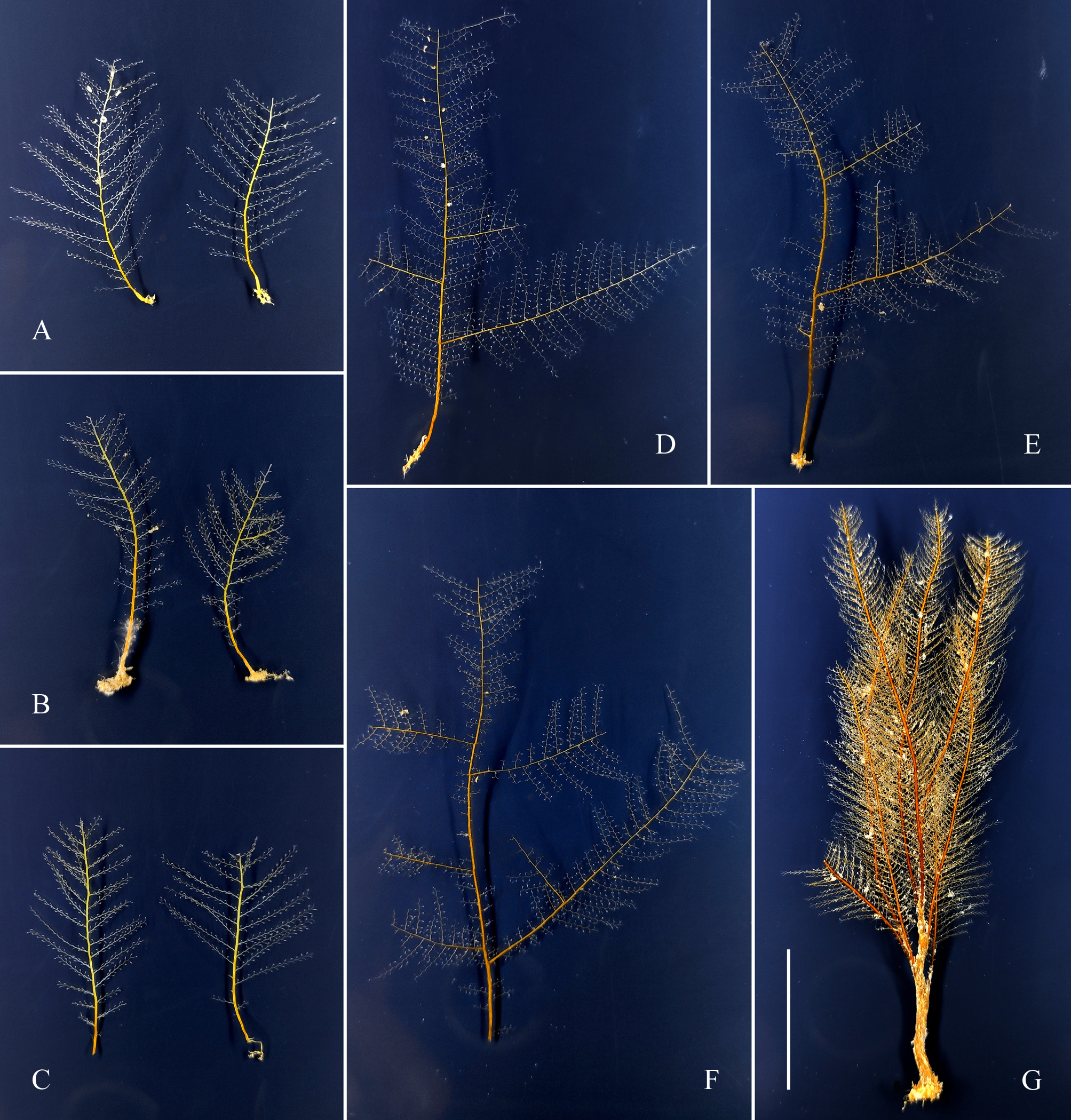