Diagnosis. This species resembles A. pedicellatus sp. nov. in the body form and coloration, but females differ in having smaller receptacula with a diameter of only 2/5 of lateral patches of pores on atrium ( Fig. 4 View FIGURES 1–9 ); males differ by their wide and fan­like conductor ( Figs 8–9 View FIGURES 1–9 ) and their kidney­shaped fourth pair of sternal sigilla ( Figs 3, 7 View FIGURES 1–9 ).

Habitat. In forest, silk tubes are attached to the base of pine trees. We checked about 1,000 pine trees in Baotianman National Nature Reserve, Neixiang County, Henan Province, China, but found only six tubes, three of which had spiders inside.

Remarks. This species was originally described by Hu (1994, figs 1–9) based on the specimens collected from Neixiang County, Henan Province, China (presumably lost, we did not find the type specimens in the collection in the College of Life Sciences, Shandong University). Judging from the specimens (1 mature female and 2 juvenile females) collected from the type locality, the receptacula are large with basal stalks of median pair of receptacula about as long as long diameter of receptacula. The illustrations given by Hu (1994) show that the conductor is fan­like with its distal end widened. Yoo & Kim (2002) recorded males of this species from Korea but did not provide detailed information, such as number, collecting time and locality, and the illustrated palpal organ cannot be interpreted. 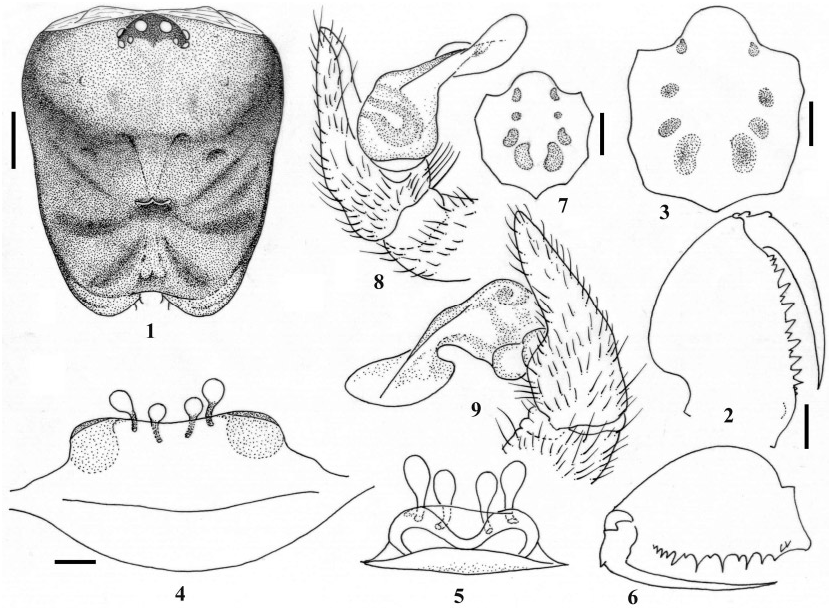