Male. Structure. As in female, except flagellomeres 6–8 with elevated linear tyloids. Color. As in female, except: yellow of paraocular area extending to 0.8–0.9 × distance between antennal socket and apex of eye; ventral surface of flagellum brownish-yellow; lateral area of pronotum yellow but for brown stripe extending from median area to center of lateral area. Length. 3.1–3.5 mm; fore wing 2.9–3.2 mm.

Comments. In Fitton et al. (1982), the female of A. leucotrochi   runs to couplet 9, where it founders due to the short antenna, and yellow supraclypeal area and paraocular area. In Kasparyan (1990), A. leucotrochi   will go smoothly to couplet 56, which leads to A. brevicornis Holmgren   and A. rufithorax Kasparyan. However   , the combination of the length of flagellomere 4 and color patterns of the supraclypeal area, propleuron, and mesopleuron rules out placement in either species. Comparisons with determined material (including specimens used by Kasparyan) and published descriptions convince us that A. leucotrochi   cannot be construed as belonging to any described species. It can be distinguished by the combination of: distinctly thickened flagellomeres 7–12, flagellomere 4 about 2.2 × as long as wide, color pattern of anterior head surface ( Fig. 5 View FIGURES 4–7 ), regularly punctate mesoscutum (thus appearing evenly setose in pristine specimens), black mesopleuron and propodeum, length of S1 about 0.2 × length of T1, and smooth surface of T2. In particular, female A. leucotrochi   differ from A. brevicornis   , the closest species to it morphologically, in its completely yellow supraclypeal area, more extensively yellow portion of the gena immediately adjacent to the mandible, more extensive yellow markings on the propleuron and pronotum, and almost entirely yellow hind coxa (usually extensively brown in A. brevicornis   ). In males, the pronotal and propleural coloration of the two species is more similar, but in A. leucotrochi   the yellow paraocular area extends further dorsally (about 0.8 × the distance between the antennal socket and the apex of the eye, against 0.5 × in A. brevicornis   ). In addition, A. brevicornis   has a later flight period in Britain (June through July, possibly also August through September) and different hosts (found several times on an undetermined tenthredinid on Betula   ).

Yellow to whitish apical banding is found on the tergites of many species of Adelognathus   . In A. leucotrochi   , the apical bands in tergites 3+ appear to be caused by a particularly thin epidermis, as they are often degraded to the point where a good portion of a band is missing in a mottled and irregular fashion.

Etymology. The specific name derives from that of the host, Nematus leucotrochus Hartig. 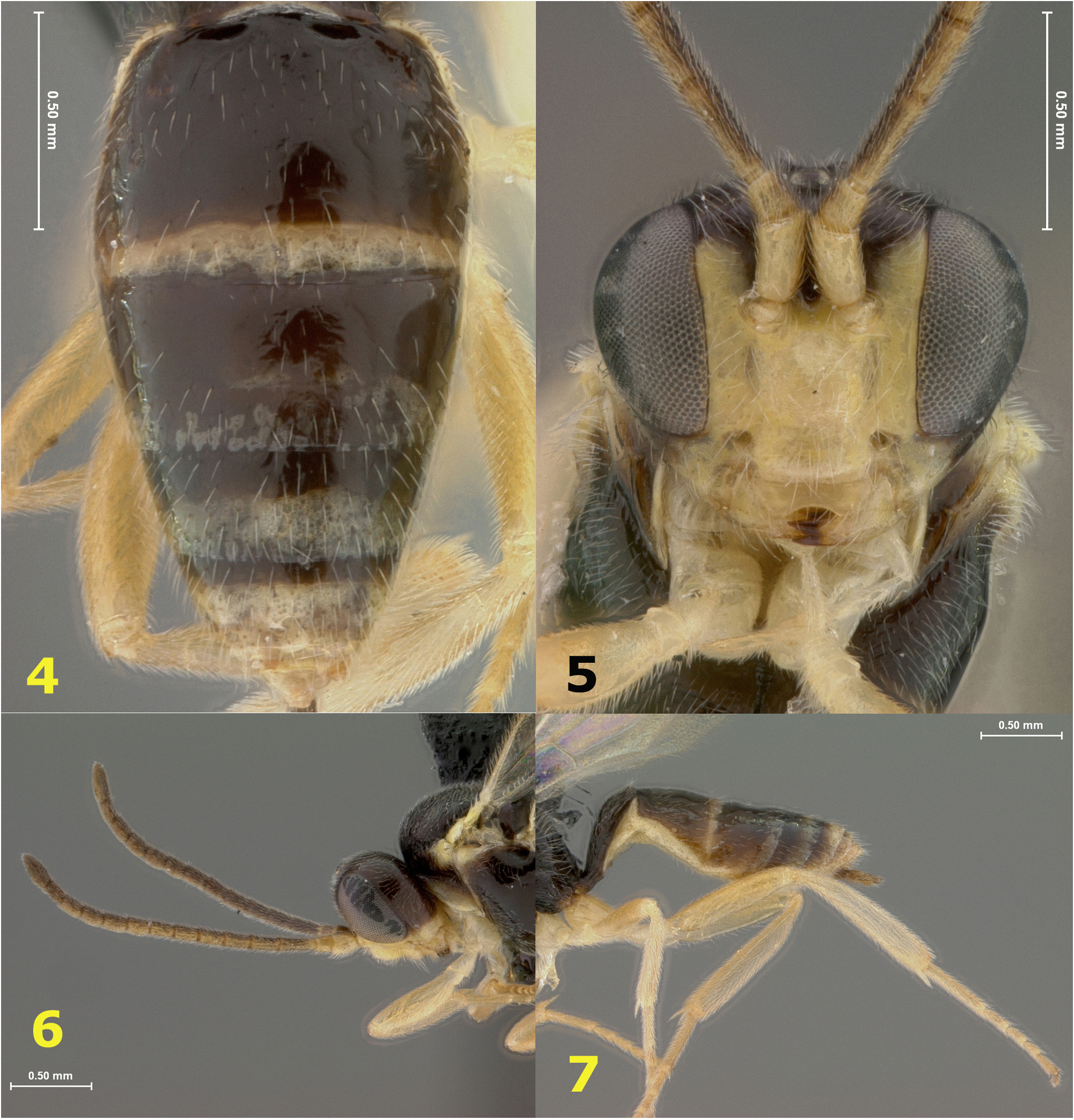