Diagnosis. MALE. The following combination of characters is diagnostic for L. chionothrix : the body is entirely black; the mandible has a ventral tooth basally; the forewing has its veins encompassing the basal 0.7 of the wing; the mesoscutum is densely coarsely punctate; the T1 shape is disciform; the head and T2 disc have separated punctures; the T2 fringe is composed of thick bristles; and the paramere is virtually straight and lacks elongate setae. Body length 3.5–5 mm.

FEMALE. As in males, this species is similar to the variable L. hicksi . Lomachaeta chionothrix has tighter areolations on the head and mesosoma, with 13 areolations between the pronotal spiracles; and has T6 basally with dense long setae that are black basally and white apically. The following characters may also be useful for diagnosis: the baso-ventral mandibular margin has a weak hyaline lamella; the mesosoma is compact, with the thoracic dorsal length 0.85 × its width; the pronotal and propodeal spiracles are swollen and tuberculate; the lateral mesonotal tooth is undefined; the lateral propodeal face is impunctate; the mesosomal dorsum lacks subparallel thickened setae; the T1 shape is sub-disciform; T2 has sparse punctures, mostly erect brachyplumose setae, and mostly smooth intervals; the T2 fringe is composed of dense thick white setae; and the S6 lateral carina is shallow.

Remarks. This species is closely related to the widespread L. hicksi , differing in males by mesosomal punctation and genitalic differences only. Until now, this species is the only Lomachaeta known from Central America and although 10 species are known from Mexico, only L. chionothrix has been found in Jalisco.

Only two females have been observed from the northern Neotropical region: one from Costa Rica and one from Jalisco, Mexico. These females differ in significant structural features, especially the head and mesonotum punctation. The female from Jalisco was collected in Chamela, where L. chionothrix males have been recorded ( Williams & Pitts 2009). This female is similar to L. hicksi , differing mainly by its tighter mesosomal areolations. Lomachaeta chionothrix males also have tighter mesosomal punctation than L. hicksi . Morphological similarity to L. hicksi and co-occurrence with L. chionothrix males in Chamela supports the association of this female with L. chionothrix . The female from Costa Rica cannot be differentiated from the newly associated L. hyphantria females and is discussed below.

Diagnosis. MALE. This species can be immediately recognized by the unique coloration, wherein the body is largely black, except the orange tegula and femora. The following characters are also useful for diagnosis: the head and mesosoma have coarse separated punctures; the mandible has a ventral tooth basally; the forewing has its veins encompassing the basal 0.7 × of the wing; the T1 shape is disciform; the T2 disc has separated punctures; the T2 fringe is composed of thickened bristles; and the paramere is straight and lacks elongate setae. Body length 4.5–6.5 mm.

FEMALE. This species can be recognized by the body color, which is entirely orange, including the legs and antennae, except T6 is blackish; and T3–5 are clothed mostly with black erect setae except for the dense thick silver setae of the T2 and sometimes T3 fringe. The following characters will also aid in diagnosis: the baso-ventral mandibular margin has a hyaline lamella; the head width is 1.1 × the mesosomal width; thoracic dorsal length 0.9 × its width; the pronotal spiracle is usually swollen and nearly tuberculate; the lateral mesonotal tooth is usually distinct; the propodeal spiracle is sharply swollen and tuberculate; the lateral propodeal face is impunctate; the mesosomal dorsum has about 10 areolations between the pronotal spiracles, many areolations have the intervals either obliterated or raised to tuberculate corners; the T1 shape is sub-sessile; T2 has sparse punctures and mostly smooth intervals; and the S6 lateral carina is low sub-triangular. Body length 2.5–4 mm.

Remarks. This species was placed in the L. hicksi species-group ( Williams & Pitts 2009) with L. hicksi and L. chionothrix . Males in this species-group can be easily recognized because of the distinct ventral mandibular tooth. Females are more difficult to define, as the main diagnostic trait of males, the ventral mandibular tooth, is reduced to a subtle lamella in females. Additional traits for L. hicksi species-group females (couplet 7 below), are more distinct in L. hicksi and L. chionothrix than in L. cirrhomeris . If one were to mis-step at couplet seven, females of L. cirrhomeris would key out to L. beadugrimi , which can be recognized by having the T2 intervals microreticulate (mostly smooth in L. cirrhomeris ) and T3–5 with interspersed silver and blackish erect setae (T3–5 setae mostly black in L. cirrhomeris ). 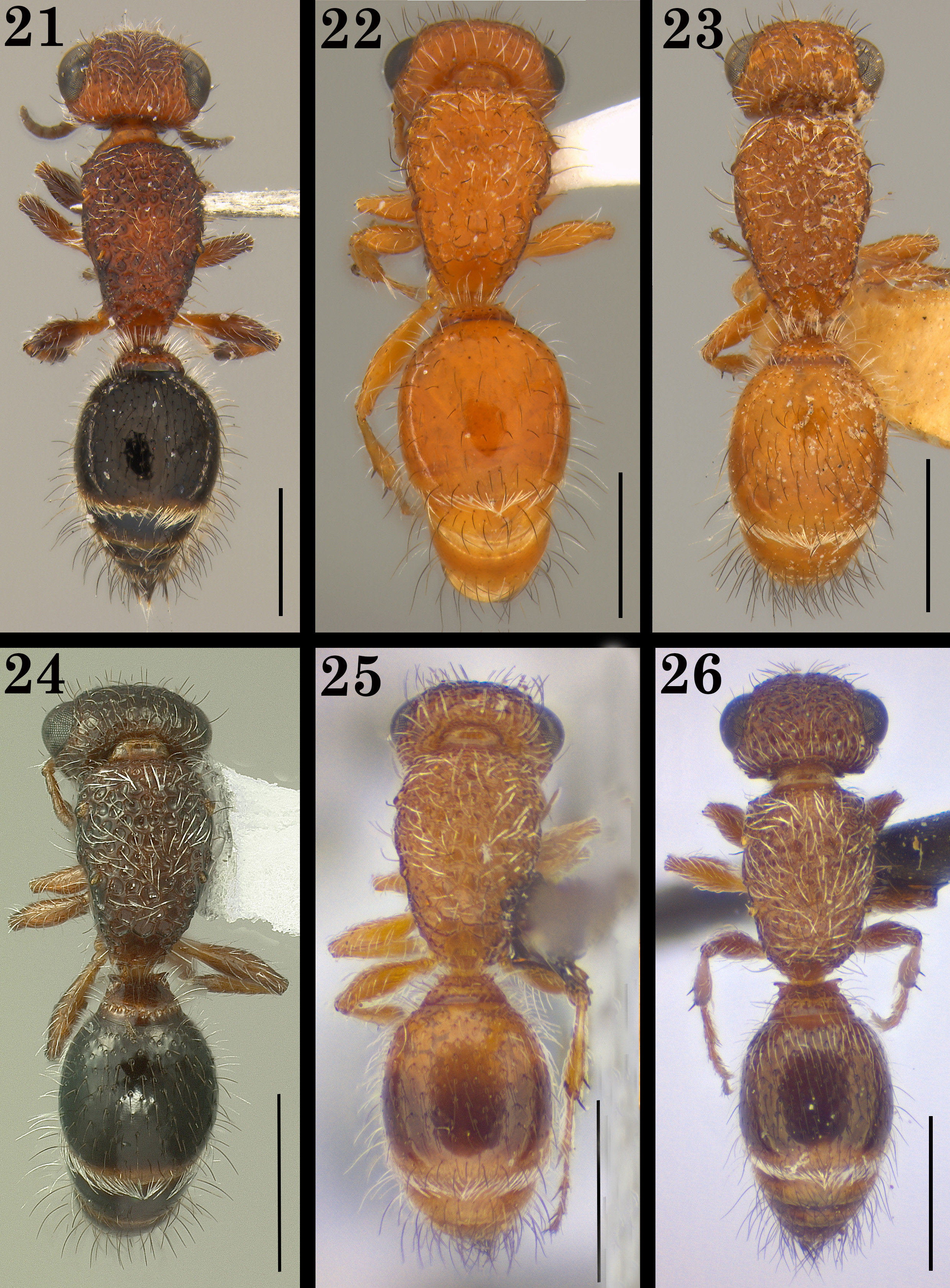 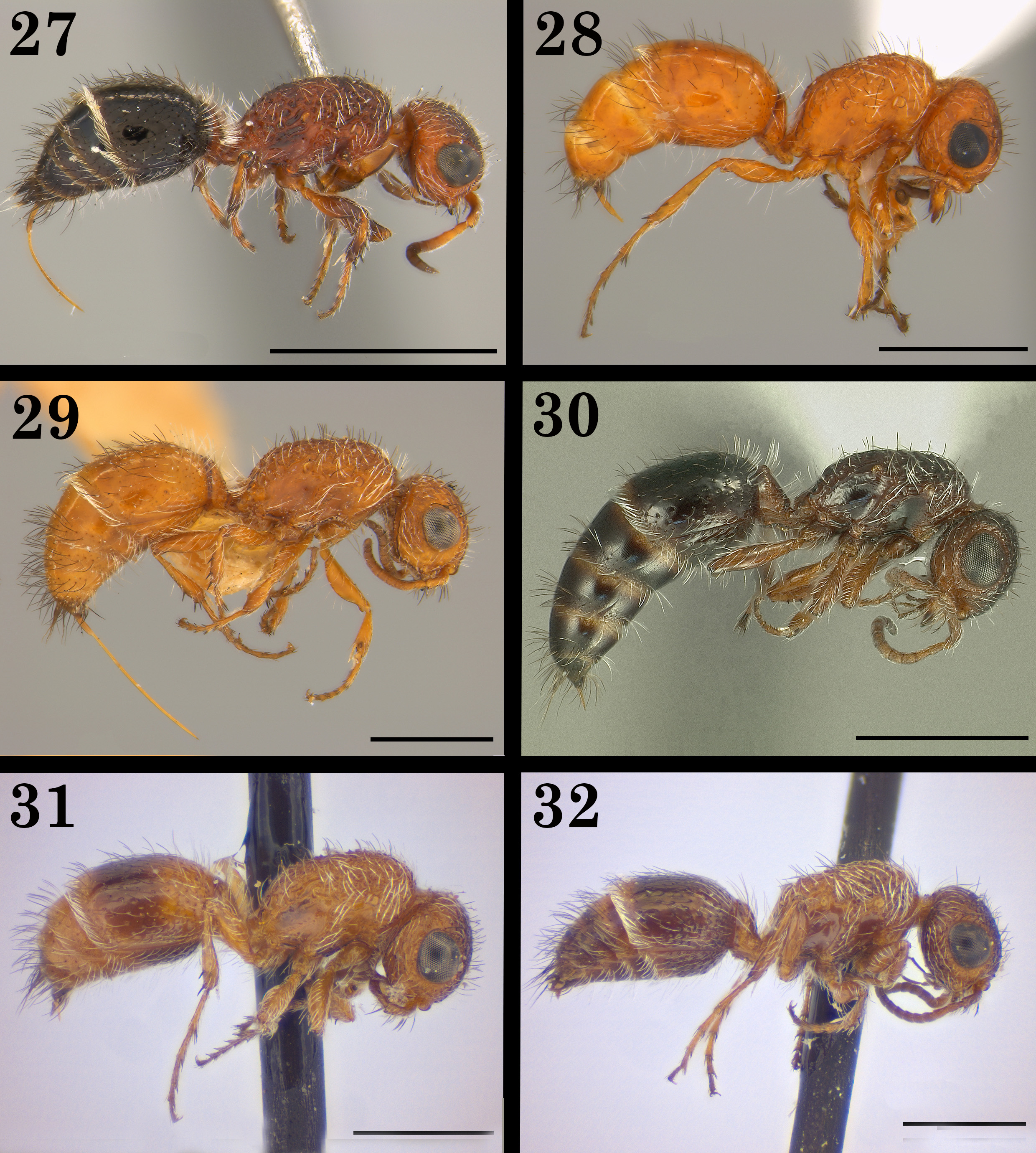 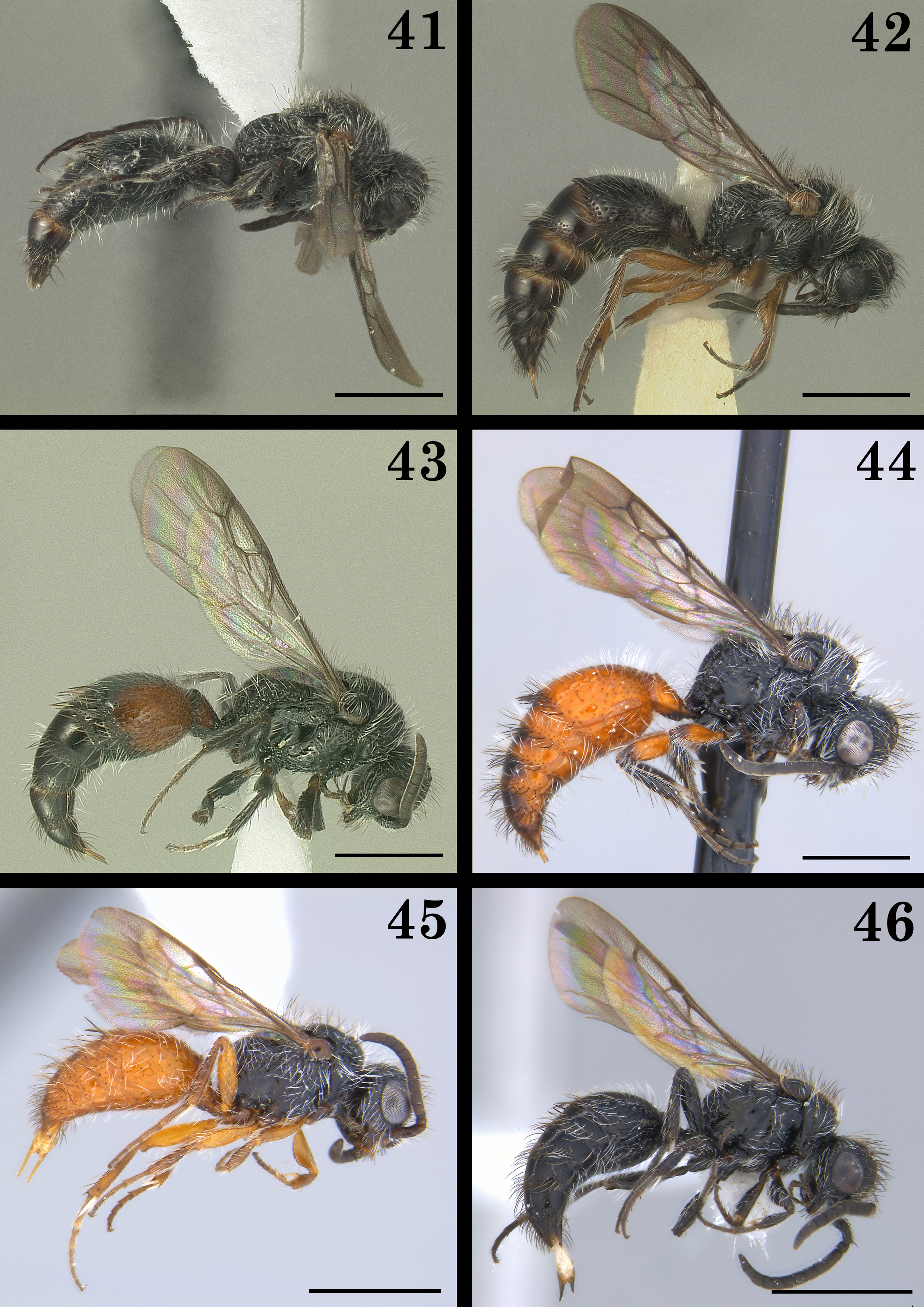