Diagnosis. Easily distinguished from other species by the bold grayish-white postmedian band on the ventral side of the hindwing. Larger than T. leucoglene  , with spatulate antennal clubs, a bipupillate apical ocellus between M 1 -M 3 on the ventral side of the forewing, and the androconia more sparse on the male forewings. Male genitalia similar to those of T. eleates  .

Redescription. Head: Antennae 8–9 mm with chocolate brown scales and a longitudinal stripe of white scales, terminating in a spatulate club. Eyes oval and naked, length approximately 1.3 X the width. Palps almost entirely tan with chocolate to dark chocolate piliform scales that are lighter toward the base. Terminal segment conical and about one-sixth the length of the second segment.

Thorax with tan to dark chocolate scales and tan to chocolate piliform scales. Foreleg tarsi with three segments in the males, female tarsi unavailable for study. Midlegs and hindlegs with four rows of black spines on the tibia and tarsus.

Forewing ( Fig. 12View FIGURE 12 A, B): Wingspan 30–40 mm. Termen nearly straight to slightly convex and the distal end of the discal cell L-shaped. Males with a sparse rectangular androconial patch that extends from R 5 into the distal end of the discal cell and just past CuA 2, sometimes to the inner margin. Dorsal side chocolate to dark chocolate brown with the fringe scales in chocolate. Postmedian band appears as a rust orange to rust red patch from M 3 -CuA 2. Females may have a small white ocellus between M 1 -M 2. Ventral side similar in color to the dorsal side with a rust orange to rust red patch extending from the center of the discal cell into the postmedian band. The postmedian band is edged in dark chocolate deckle-edged to nearly straight borders and is lighter than the rest of the wing, chocolate brown toward the costa and inner margin and rust orange to rust red from M 1 to just past CuA 2. A patch of white scales extends in a ripple pattern with chocolate brown striations over the radials and apex. Apical ocellus is round, black, ringed in daffodil yellow, bipupillate, and extends from M 1 -M 3.

Hindwing ( Fig. 12View FIGURE 12 A, B): Wing rectangular, termen straight to slightly convex and entire. Dorsal side similar in color to the forewing with the postmedian band appearing in a lighter brown with a patch of rust orange to rust red between M 3 -CuA 2. Fringe scales are as in the forewing and long piliform scales appear at the base and over the discal cell, extending to the median and toward the inner margin. VHW darker than the VFW and with a ripple pattern in dark chocolate to dark coffee that extends over the majority of the the wing. Postmedian band appears in grayish-white to pale lavender, solid at the median half and fading to chocolate brown in the subterminal half. Borders of the postmedian band are deckle-edged to nearly straight and dark chocolate to dark coffee.

Male genitalia ( Fig. 21View FIGURE 21 A –C): Uncus wide at the base, narrowing gradually to an acute terminus, and slightly shorter than the tegumen. Gnathos acute and about three-fifths the length of the uncus. Pedunculus deltoid and wide. Saccus U-shaped and about equal in length to the gnathos. Valvae roughly in the shape of a flattened rhomboid, widest at the median with the distal end rounded. Aedeagus nearly even in width throughout with the proximal end about twice as wide as the median and truncate. 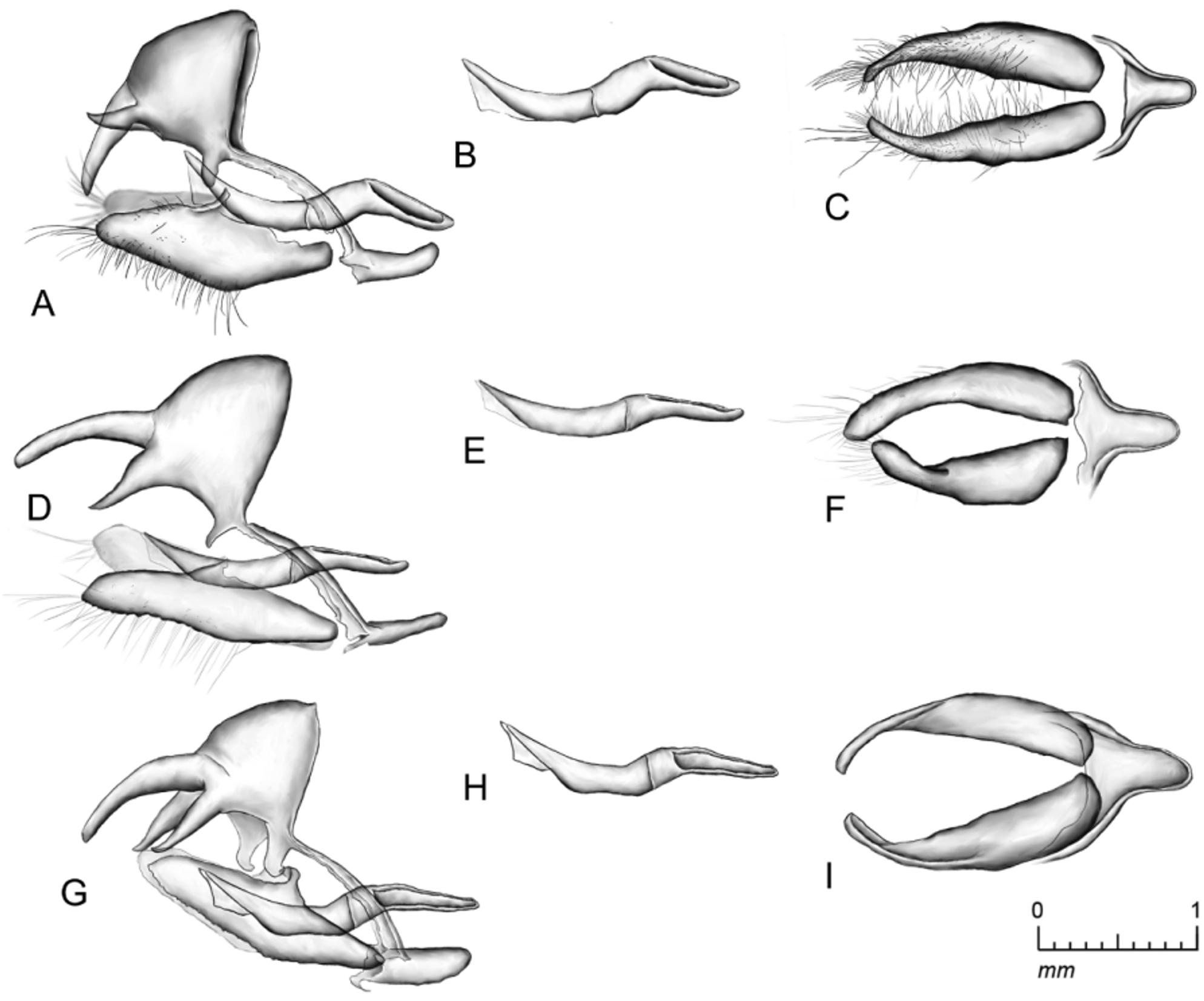