Derivatio nominis. Named after British Rock’ n’ Roll band The Rolling Stones for the song “Gimme Shelter (1969) and all the rest.

Diagnosis. Small, flattened species of Vologesia with a teardrop-shaped outline. The apical disc is positioned anteriorly and tetrabasal, with a prominent madreporite. The periproct is inframarginal. The pentagonal peristome is laterally elongated. Perioral ambulacrals show flush, short phyllodes with an inner and outer series of pore pairs. Bourrelets are only weakly developed.

Description. Vologesia rollingstones sp. nov. is a small species that does not exceed 25 mm in overall test length and is characterised by a flattened, ovoid test, with its widest point approximately in the posterior lower third of the test. The margins of the flattened oral surface are well rounded. The oral surface is more convex in small-sized specimens (> 13 mm). The posterior side projects into the inframarginal periproct, thus, the test is slightly teardrop shaped in dorsal view. The ambitus is positioned in the lower third of test height. The aboral surface is generally flattened. The position of the apical disc is variable, ranging between 32 and 42% of test length to the anterior margin; in general, it is closely situated to the anterior edge (35% of test length). The apical disc is tetrabasal, the madreporite being formed by a large genital plate 2, which occupies the centre of the apical disc, the remaining genital plates being reduced in size ( Fig. 5 View FIGURE 5 F).

The peristome is small, laterally elongated and pentagonal in outline. The distance from the peristome to the anterior margin is 25–35% of test length (average 30%). The bourrelets are only weakly developed, which is why only an imperfect floscelle structure is developed. Short phyllodes, which are flush to the oral surface, are simple, being composed of an outer series with 7 pores and an inner series of 2 pores (see Fig. 5 View FIGURE 5 D); the inner pores are carried by occluded plates; small buccal pores are present. The laterally elongated, oval periproct has an inframarginal position.

The tuberculation is fine and dense, with tubercles decreasing in size in aboral direction. A narrow, pitted band without tubercles extends from the peristome to the periproct.

Discussion. So far, the genus Vologesia comprised only three species; V. tataosi , V. rawdahensis and V. toucasi . From V. rawdahensis (for a detailed description, see Smith, 1995), V. rollingstones sp. nov. can be distinguished by its smaller size, a more rounded ambitus, a more anteriorly situated apical disc and shorter petals, while the peristome is further to the anterior margin (21–27% of test length in V. rawdahensis ). In addition, a third inner series of pores in the phyllodes is partially developed in V. rawdahensis , while this is absent from V. rollingstones sp. nov.; the inner pores in the phyllodes of the latter are dispersed, in contrast to V. rawdahensis . Ali (1989) noted that V. rawdahensis was similar to V. tataosi and could only be distinguished from the latter by a more elongate and pointed posterior test with a smaller peristomal opening. Thus, V. rawdahensis and V. tataosi might turn out to be conspecific (see discussion in Smith, 1995). Other species that had previously been placed in Vologesia by Lambert and Thiéry (1909 –1925), including Conoclypus rhothomagensis d’Orbigny, 1855 , Clypeolampas ovum de Grateloup, 1836 , Clypeolampas conicus Arnaud, 1877 , Clypeolampas gossaviensis Lambert, 1907 , Clypeolampas helios Noetling, 1897 and Echinolampas acuta Des Moulins, 1837 ), are better assigned to Hungaresia or Clypeolampas (compare Smith, 1995). They can all be distinguished from V. rollingstones sp. nov. by their inflated tests, longer petals, more centrally positioned peristome and swollen bourrelets. The degree of bourrelet development cannot be identified in C. gossaviensis [treated by Smith (1995) as a nomen dubium] and C. conicus on the basis of their original descriptions. 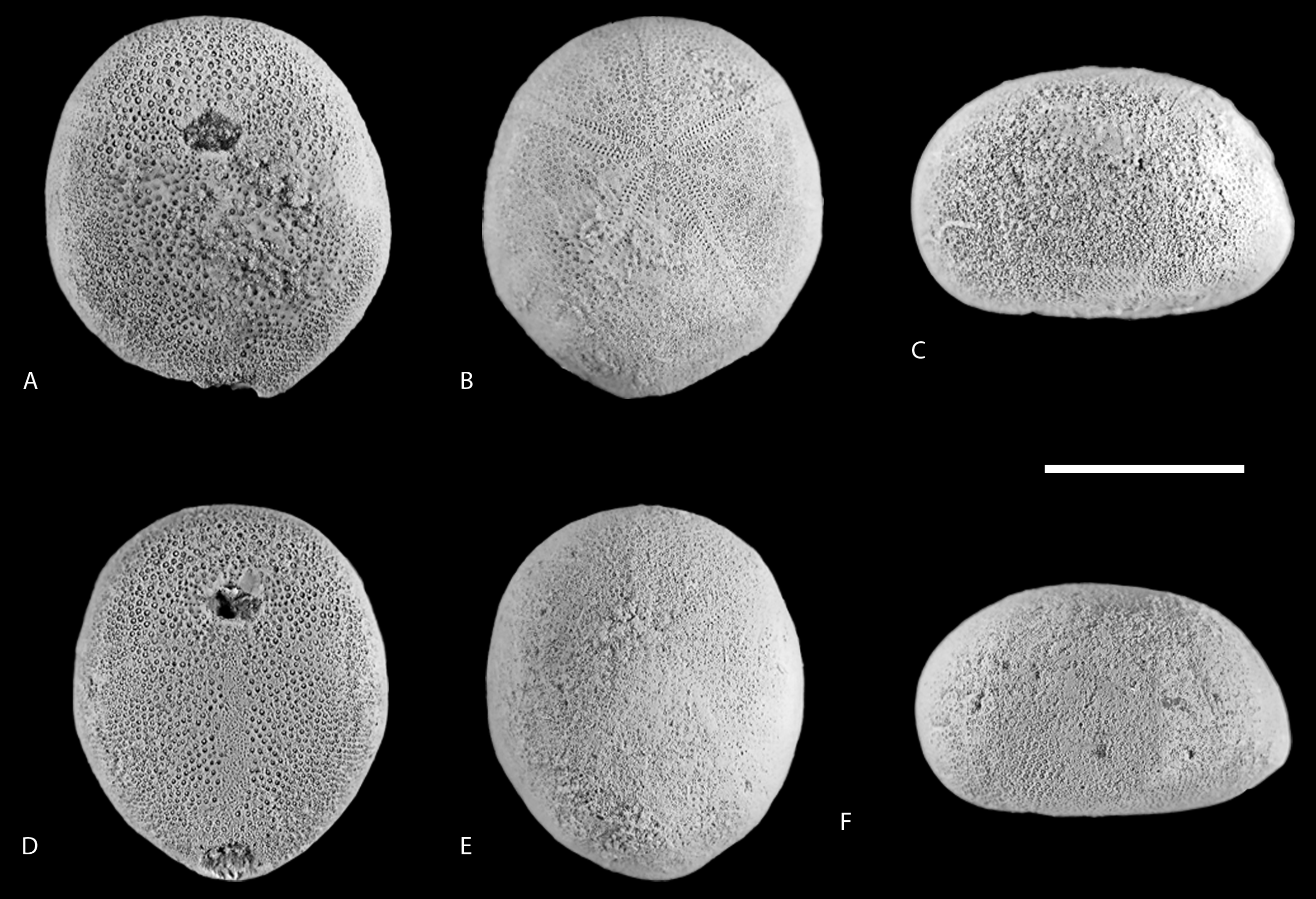 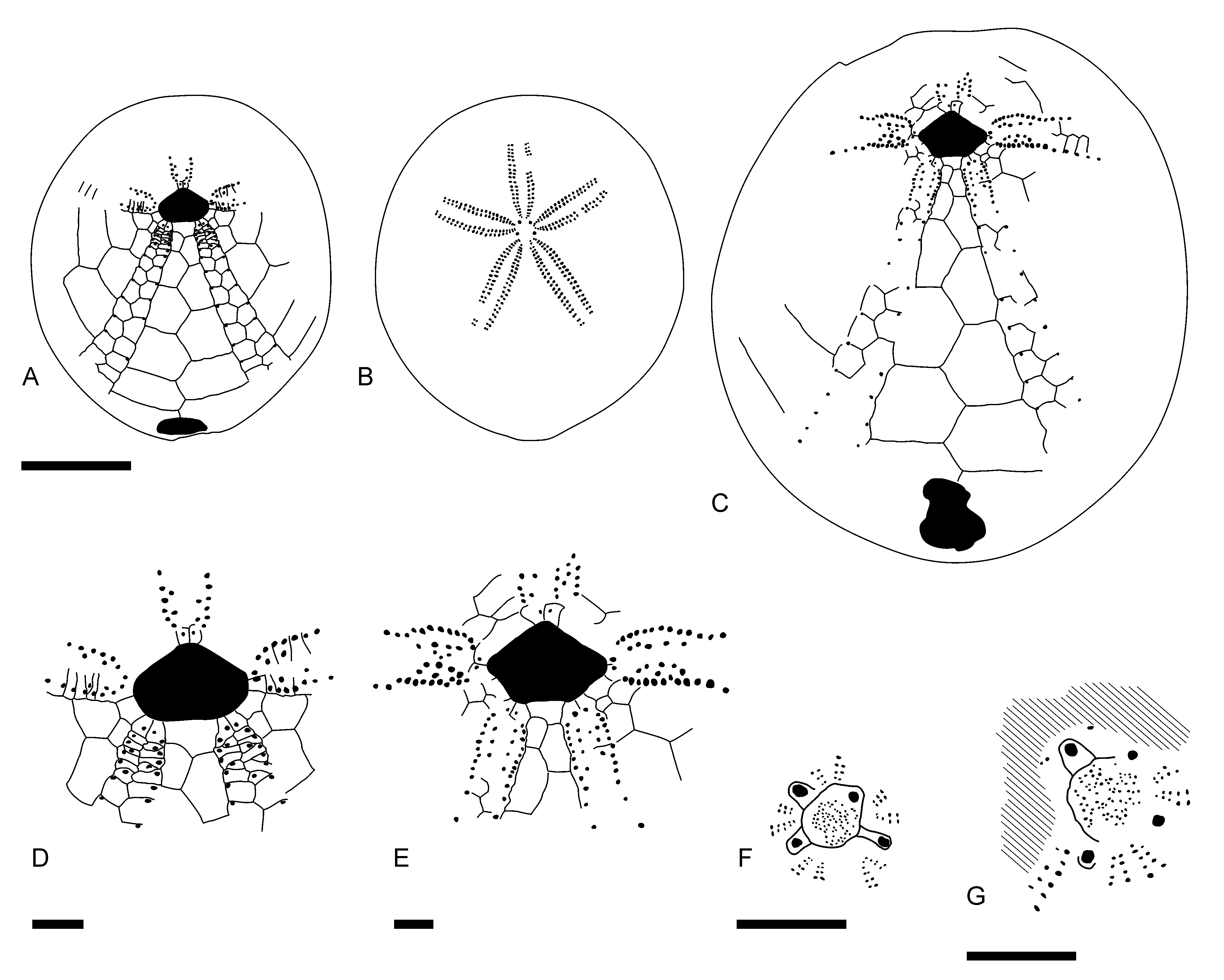