General features: Oval-like eggs with slightly pointed poles, morphologically characterized by a wavy chorion surface, although apparently smooth at low magnifications, with many attachment structures which are distributed uniformly ( Fig. 4View FIGURE 4 A. B). The eggs of this species are big and their dimensions vary between 264–297 µm in length and 161–208 µm in width

Attachment structures and chorionic sculpturing: These two basic characteristics of eggs must be analyzed jointly in this species, because all the chorionic structures observed externally are related to an attachment function, but at the same time constitute the egg sculpturing, since they cover the egg completely. The chorion surface is a fibrous adhesive layer strongly adhering to the rest of the chorion, whose fibers may be distinguished clearly by SEM from 2000 x magnifications. The fibers are formed of short and fine filaments (0.11 μm diameter) arranged in parallel forming bundles ( Fig. 4View FIGURE 4 C, D). In addition, these bundles of filaments may be related with each other following the same direction or intercrossing ( Fig. 4View FIGURE 4 B, C), causing different ultrastructural levels of organization in the thickness of the fibrous layer. The fiber arrangement also causes the appearance of different types of external structure, including small orifices (+ 2 µm of diameter) and fibrous projections ( Fig. 4View FIGURE 4 C, D). The egg surface presents many such orifices randomly distributed, and often can be observed in them, although with difficulty, that the fibers can be seen to be organized into several layers ( Fig. 4View FIGURE 4 C). These orifices are probably related into aeropyles, although a detailed study would be necessary to confirm this.

In certain points of the fibrous layer, one or more bundles of filaments rises from the layer surface, turning spirally to produce fibrous projections, that could be classified as “fiber-coils”, of which two types can be distinguished, without a terminal fiber clusters and with a terminal knob. “Fiber-coils without terminal fiber clusters” correspond to a round structure of 6.5 µm diameter and sucker-shape, in which the filaments form a thick edge that delimits a depressed central area ( Fig. 4View FIGURE 4 D). On the other hand, “fiber-coils with terminal knob” correspond to a pedunculate structure and mushroom-shape ( Fig. 4View FIGURE 4 E), approximately 7.3 µm height and 5.8 µm diameter in the umbrella-shaped part. This last structure has a more compact appearance than the previous one and its fibrous nature is only observable in the peduncle base, for which reason it has been classified as “fibrous attachment structure”.

Micropyles: These basic chorionic structures were not found in the eggs of this species.

The main morphological aspects of O. rhenana  egg were dealt with in depth by Degrange (1960) and later, briefly, by Haybach (2003). Our SEM observations confirm the fibrous nature of the attachment structures (layer surrounding the chorion and lateral projection), that has already been described by Degrange (1960) in this species, which is a very common feature in Oligoneuriidae  eggs ( Koss & Edmunds 1974). The morphology and arrangement of the fibers of the fibrous layer of O. rhenana  and Siphlonurus lacustris (Eaton, 1870)  eggs were very similar according to Degrange (1960), but SEM investigations suggest quite the opposite. The fibers of O. rhenana  are short and compact bundles, formed by tiny inconspicuous filaments, which may be arranged in parallel or intercrossed, whereas the fibers of S. lacustris  are very long, relatively thick, and very conspicuous; they are loosely arranged in different directions ( Gaino & Rebora 2001). The ultrastructural organization between the fibrous attachment layer and the rest of the chorionic layers is still unknown in O. rhenana  , and a study of the eggshell using TEM is necessary.

The lateral attachment structures in O. rhenana  eggs have been classified as fiber-coils with terminal fiber clusters, although two forms have been distinguished, one apparently evolved from the other ( Degrange 1960; Koss & Edmunds 1974). In our SEM study, two forms of fiber-coils were also differentiated; however, in relation with the forms already described, morphological differences are evident but we found no clear indication concerning which one evolves from the other. In fact, if we simply look at the organization of the distal end, we can differentiate two types of fiber-coils: those with a terminal knob and those without a terminal fiber cluster. Our fiber-coils with a terminal knob only have a lateral attachment structure which arises from the eggshell surface as a projection, and which is only a part of the attachment structures included in the type described by Koss and Edmunds (1974). The fiber-coils without terminal fiber clusters involve the remaining lateral attachment structures, which appear to terminate within themselves, forming a sucker-shaped structure. A similar structure to this last one has already been described by Koss and Edmunds (1974) for Oligoneuriidae  eggs, but not in O. rhenana  eggs. In addition, having obtained SEM evidences of the morphology of fiber-coils in eggs of S. lacustris ( Gaino & Rebora 2001)  and in O. rhenana  , we were able to verify that these are clearly different, both in morphology and in arrangement unlike that indicated by Koss and Edmunds (1974), in which S. lacustris  fiber-coils are really of the type with terminal fiber clusters.

The extrachorion could not be determined in the eggs of O. rhenana  studied, although this cover is probably present and could be the thin layer that Degrange (1960) described enveloping the attachment structures externally which coagulated in eggs preserved with ethanol. We cannot explain why we did not observe this layer in O. rhenana  , having studied eggs preserved in ethanol and obtained from nymphs, even though the extrachorion was observed in the eggs of other species preserved in ethanol ( Ubero-Pascal et al. 2005); according to Koss and Edmunds (1974), eggs from nymphs display a thicker extrachorion. Neither did we observe a micropyle in eggs of O. rhenana  , although this chorionic structure is “tagenoform-type” and one or two units appear near one of the polar areas ( Degrange 1960). Probably, as already described in other species displaying a fibrous attachment layer ( Gaino & Rebora 2001), the micropyle can only be observed by SEM when this layer has been removed.

The fibrous adhesive layer and “fiber-coils” as lateral attachment structures seem to be common characteristics of the morphological patterns of Oligoneuriidae  eggs. From a taxonomic point of view, the density and distribution of the lateral attachment structures around the egg could help differentiate species, although their use in genera taxonomy is not clear from light microscopy ( Koss & Edmunds 1974). Descriptions of the chorion morphology in Oligoneuriidae  using SEM are scarce, very concise or merely represented by a photograph ( Pescador & Edmunds 1994; Soldan & Thomas 1983), while our description of O. rhenana  eggs demonstrates that SEM can show new details of the chorionic structure which could be taxonomically useful, for example for differentiating from Oligoneuriopsis skounate Dakki & Giudicelli, 1980  . This species occurs with O. rhenana  in the Segura river basin and, although we only have a general photograph of its egg ( Soldan & Thomas 1983), both species could be differentiated by the “fiber-coils”. O. skhounate  has eggs with “fibercoils a with terminal fiber clusters”, very similar in morphology to the egg of S. lacustris  , while the two types of “fiber-coils” of O. rhenana  egg are clearly different. 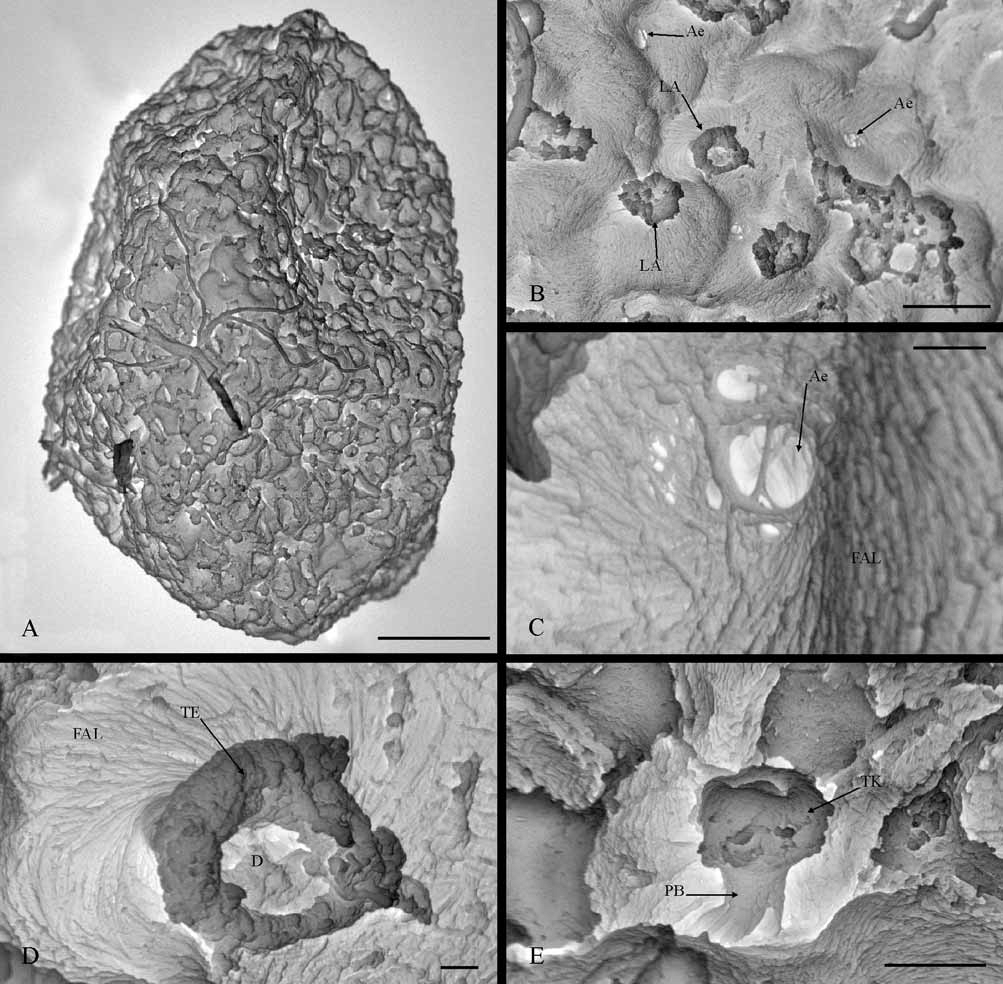