Typically, these larvae are immersed in deep volumes of material and, compared with other saprophages, they are similar. Fully extended, the middle body compartments of both species form a gradual taper from back to front, but importantly, this gradual taper is disguised by the extent to which individual segments fold into one another so that this body compartment appears to taper in a stepped manner, i.e. across segment borders succeeding segments appear smaller abruptly rather than gradually; compare Figure 1 View Figure 1 with Figure 24 View Figure 24 . Also, their oral cavities are bridged anteriorly and C. frigida   has crenulated ridges coating the bridge and the fused ends of the cephalic lobes ( Figure 14 View Figure 14 ). In contrast, C. vomitoria   has a smooth bridge with a spoon-shaped, black sclerite embedded within it, extending from which, into the oral cavity, is a pair of lightly sclerotised, oval-shaped plates ( Figures 25 View Figure 25 and 26 View Figure 26 ). The inner faces of the mandibular hooks are scalloped ( Figure 14 View Figure 14 ) and both larvae have extensive networks of spicules for gripping substrates which extend from the locomotory organs to circumvent segment borders ( Figure 24 View Figure 24 ). The intermediate sclerite is block-shaped not bar-shaped in C. vomitoria   and sclerotisation of the ventral cornu ends abruptly midway along its length. The vertical plate in C. frigida   is remarkably short. Both species have cibarial ridges and both initiate sweeping by thrusting the middle compartment in a more or less anterior direction and bending it round to one side or the other, almost reaching a position parallel with the rear section ( Figure 27 View Figure 27 ). Lunging takes place repeatedly during sweeping and the segments of the middle and front compartments are highly retractile, for example, only in these two species did the mesothorax fold over the anterior spiracles ( Figure 23A and 23B View Figures 23 ). With the middle compartment sweeping, the front one may incline and twist so that the oral cavity covers a wide range of directions and angles. Mandibular depression in C. vomitoria   exposes the sclerotised plates between the mandibular hooks (Film 11, Figure 26 View Figure 26 ). Lunging in C. vomitoria   was the most rapid of the saprophages examined here and this species had the longest lunge distance (Film 12, Table 2). C. frigida   also had a relatively fast, long lunge ( Table 2). Unusually, in C. vomitoria   saliva was secreted during locomotion and both species ingested food in shallow films using mechanisms similar to S. fumosa   , P. trimacula   and C. costata   .

Figure 1. Palloptera trimacula, whole preserved larva, lateral view, length 5.5 mm, head to the right. Arrows dorsal to the rear and thoracic body compartments indicate directions segments fold into another at the borders; line through the larva is the border between the thorax and abdomen. abd1 = abdominal segment 1; as = anterior spiracle; L = locomotory spicules straddling the border between abdominal segments 3 and 4, arrow indicates position of the border; pro = prothorax; ps = pseudocephalon; psp = posterior spiracle. 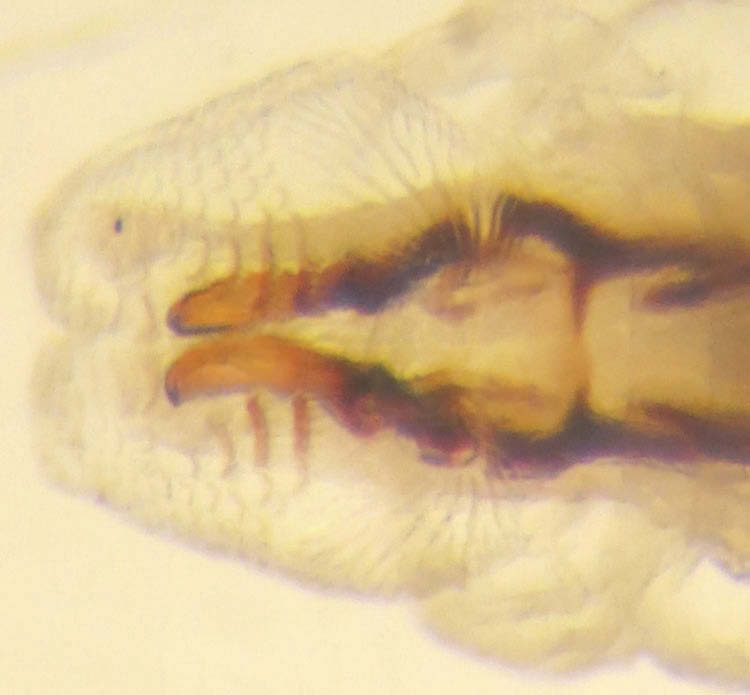 Figures 23. Coelopha frigida, stills from a film. (A) Mandibles gripping a substrate at the end of a peristaltic wave. (B) Prothorax folded over the pseudocephalon during the next locomotory wave.