Etymology. The name honours Jørgen Olesen for his research on Crustacea in marine caves.

Description of the holotype. The holotypic male is 185 µm long. Orientation of the preparation prevented estimating the maximum width, however, the height is 78 µm between the second and third leg pair, measured on the outer epicuticle. The body is thin and elongate with the typical bell-shaped outer epicuticle surrounding the trunk (Fig. 16 A; allotypic female. Fig. 16 E; holotypic male). Internal epicuticle with numerous well developed pillars (Fig. 15).

The 14 µm long median cirrus consists of scapus and flagellum. The 13 µm internal cirrus is similar to the median cirrus; however, the transition between scapus and flagellum is more marked in the median cirrus. The 23 µm external cirrus is surrounded by the secondary clava. The 23 µm lateral cirrus is situated close to the primary clava and the two structures share an indistinct common cirrophore and are partially enclosed in a funnel-shaped epicuticular fold. The 6.5 µm short ovoid primary clava has a distinct “van der Land’s organ”. The enlarged secondary clava surrounds the external cirrus nearly closing on itself (Fig. 16 B; allotypic female). The epicuticular pillars surrounding the secondary clava are very refractive. No eye spots were observed.

The buccal apparatus is typical of the genus with a 30 µm long buccal tube with two lateral projections at midlength. The stylets are 31 µm long. The long and thin stylet supports (8 µm) articulate with the furcae (Fig. 16 C; allotypic female). Stylet sheaths cover half the length of the stylet. The placoids consist only of a cuticular lining and three small calcified apodemes can be observed in the anterior part of the pharyngeal bulb.

Sense organs are present on all four pairs of legs; that of the first leg is 19 µm long and consists of scapus and flagellum. The simple spines on the second and third legs are each 5 µm long. The sense organ on the fourth leg is 17.5 µm long and comprises a prominent cirrophore similar to the primary clava with “van der Land’s organ”, scapus and a long flagellum. It is partially enclosed in a funnel-shaped epicuticular fold.

Cirrus E is 47.5 µm long and consists of a cirrophore, a corrugated scapus and flagellum. It is contained in an elongated cuticular fold.

Morphometric data of the holotype of Tholoarctus oleseni   nov. sp. is presented in Table 2.

Remarks. Tholoarctus oleseni   nov. sp. is clearly distinguishable from T. natans   due to the presence of leg sense organs on all legs; a feature that has forced us to emend the generic diagnosis. Furthermore, we suggest that Styraconyx testudo D’Addabbo Gallo, Grimaldi   de Zio & Morone De Lucia, 1984 and Tholoarctus natans pedunculatus   should be the objects of taxonomic revision. In our opinion S. testudo   should be transferred to Tholoarctus   , and T. n. pedunculatus   should be elevated from subspecies to full species (based on the presence of eyes and the type of peduncle in the internal toes).

The two-clawed larva had not yet developed the bell formed by the outer epicutle ( Fig. 17 View FIGURE 17 ) and therefore is similar to a Styraconyx Thulin, 1942   species, e.g. Styraconyx qivitoq Kristensen & Higgins, 1984   . Furthermore, the claws are simple with only the primary hook, as in the holotypic male. The allotypic female of T. oleseni   nov. sp. have claws similar to the female T. natans   , i.e. does not have simple claws on the external digits. The external claws are similar in females of T. natans   , T. n. pedunculatus   , T. oleseni   nov. sp. and Styraconyx testudo   and consist of an accessory spine, a primary hook and a secondary hook. 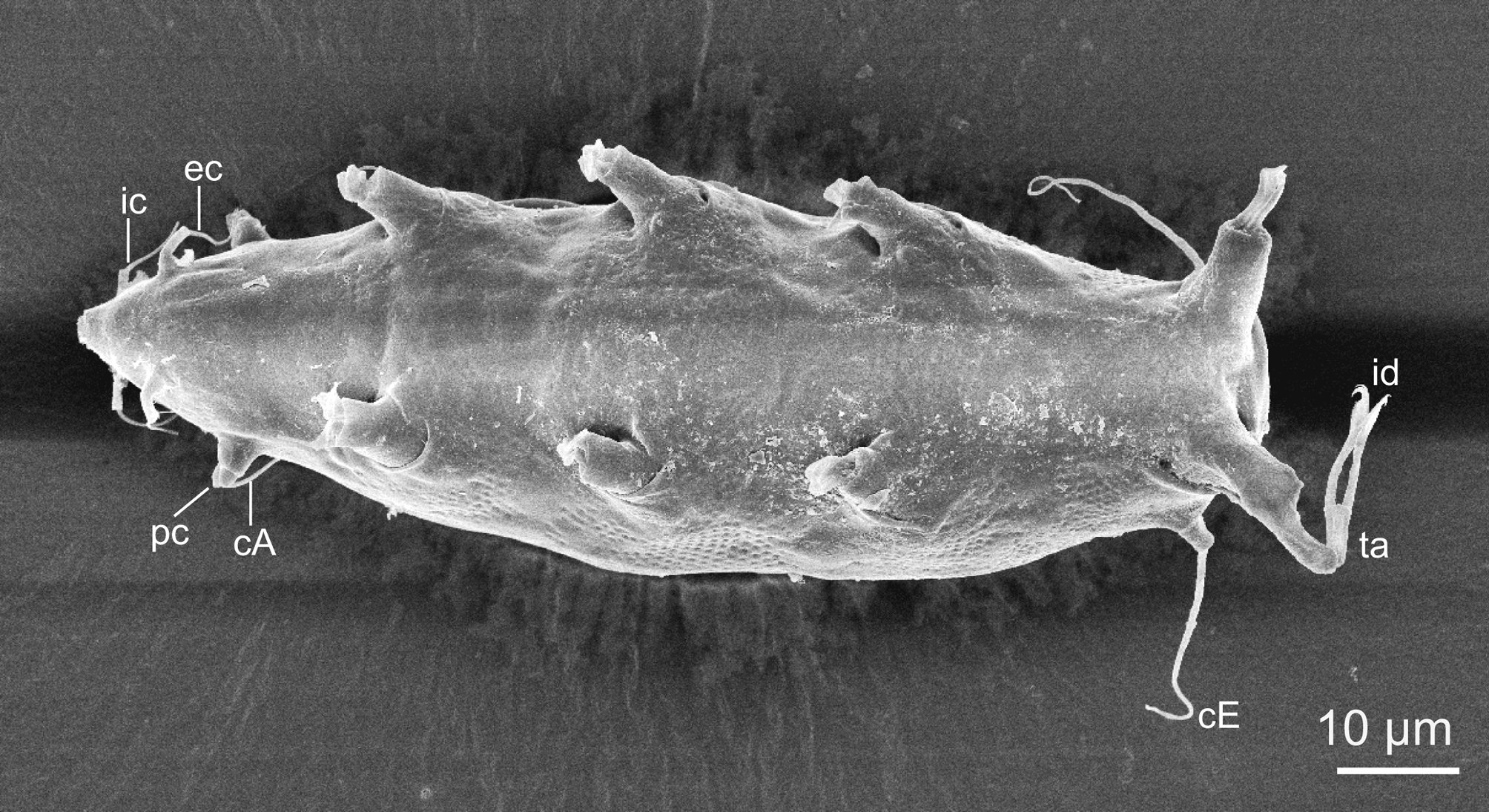