Diagnosis. Herpetoreas burbrinki can be distinguished from its relatives on the basis of the following combination of characters: 1) TL/SVL ratio in the single male 0.26; 2) one or two preoculars; 3) three postoculars; 4) three anterior temporals followed by two posterior temporals; 5) eight supralabials, 3 rd to 5 th in contact with the eye, 7 th supralabial largest; 6) ten infralabials, the first five bordering the anterior chinshields; 7) 172 ventrals (plus two preventrals) in the one single male; 8) anal plate divided; 9) 96 divided subcaudals in the one single male; 10) reduction of dorsal scales rows from 19 to 17 scale (VS19TO17) occurring above ventral scale position 108; 11) reduction of the tail dorsal scales rows from 8 to 6 (SC6TO4) occurring above subcaudal 63; 12) dorsal scales in 19-19-17 rows, all distinctly keeled.

Etymology. This species is named after the herpetologist Frank T. Burbrink of Peoria, Illinois, in recognition of his contributions to snake systematics and evolution. We suggest the common name of this new species be Burbrink’s Keelback in English and Chayu Fulianshe (Chinese).

Distribution. This species is currently known only from the type locality ( Fig.1 View FIGURE 1 ). The specimen was collected on a road located in an evergreen forest close to a town ( Fig. 3 View FIGURE 3 ). It is likely that the new species also occurs in northern Burma and/or extreme eastern India given the proximity of the type locality to their borders. No data on its feeding and reproduction are available.

Remarks. In molecular phylogenies, H. burbrinki is closely related to H. platyceps ( Fig. 2 View FIGURE 2 ). Besides their differences in external morphology, these species were significantly different in genetic distance. Based on cyt b sequences, the average divergence (P-distance) between them (13.6%) is much higher than those between some other species in clade A (e.g. 13.1% between H. optatum and H. parallelum , 4.6% between H. octolineatum and H. metusium ).

Notes on Hebius . In this work, it is not our main aim to explore and address species level taxonomy, but several species are apparently non-monophyletic, and should be examined in future studies. Previously, morphological work indicated that some species of Amphiesma sensu lato were poorly diagnosed and quite variable, contributing to frequent misidentification and confusion between these species ( David et al. 2007, 2013). This misidentification problem was also apparent in this work based on multilocus molecular sampling. It is particularly true for the species within the genus Hebius . These species include H. bitaeniatum , H. sauteri , H. craspedogaster , H. venningi , and H. modestum ( Fig. 2C View FIGURE 2 ).

The species H. sauteri is widely distributed in China (including Taiwan) and Vietnam ( Zhao et al. 1998). Based on the counts of ventals and subcaudals, Malnate (1962) divided it into three subspecies (see Zhao et al. 1998). The populations from Taiwan and southeastern China are assigned to H. s. sauteri , and those from Sichuan belong to H. s. maxima . However, molecular results presented here suggest they are not close relatives. So, it is likely that these populations represent two different species, and that H. s. maxima should be given a full species rank as H. maxima . Another example is H. modestum . A sample of H. modestum from Yunnan, China (CAS 234262) is much distinct from another one from Vietnam (MVZ 226514). Because most samples analyzed here were loaned from museums and colleagues, we are not sure whether these questions have arisen from misidenfification or they represent undescribed new taxa. A comprehensive study with more complete samples as well as various methods is highly desirable in resolving the taxonomies at species level.

Finally, taxonomic information on the revised genera Amphiesma , Hebius , and Herpetoreas are provided below. However, we note that the generic diagnoses of these genera have been modified from published sources cited herein, and thus may not be precise. More complete diagnoses will depend on comprehensive morphological studies, but even then, the evident degree of convergence may complicate this substantially ( Pyron & Burbrink, 2009). 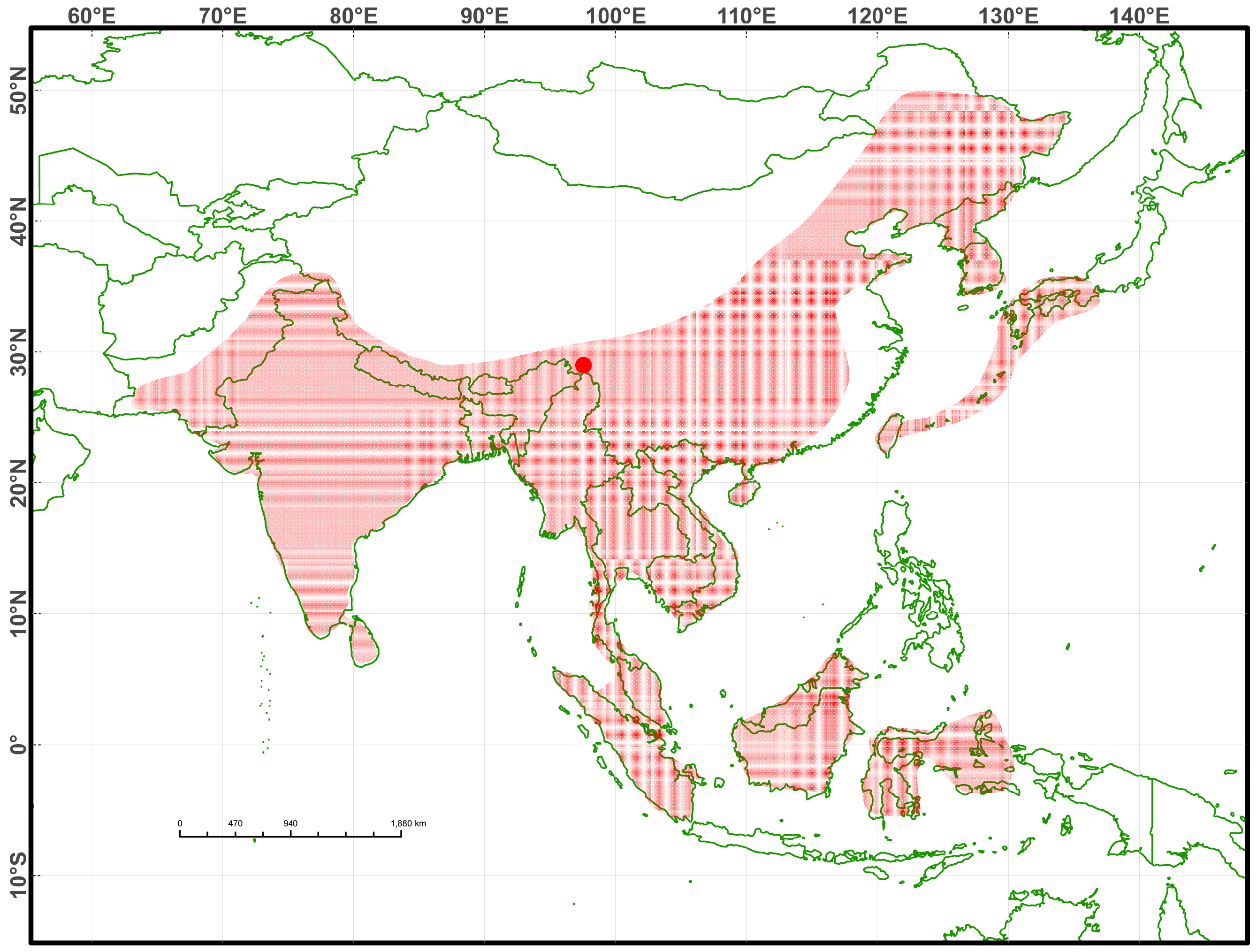 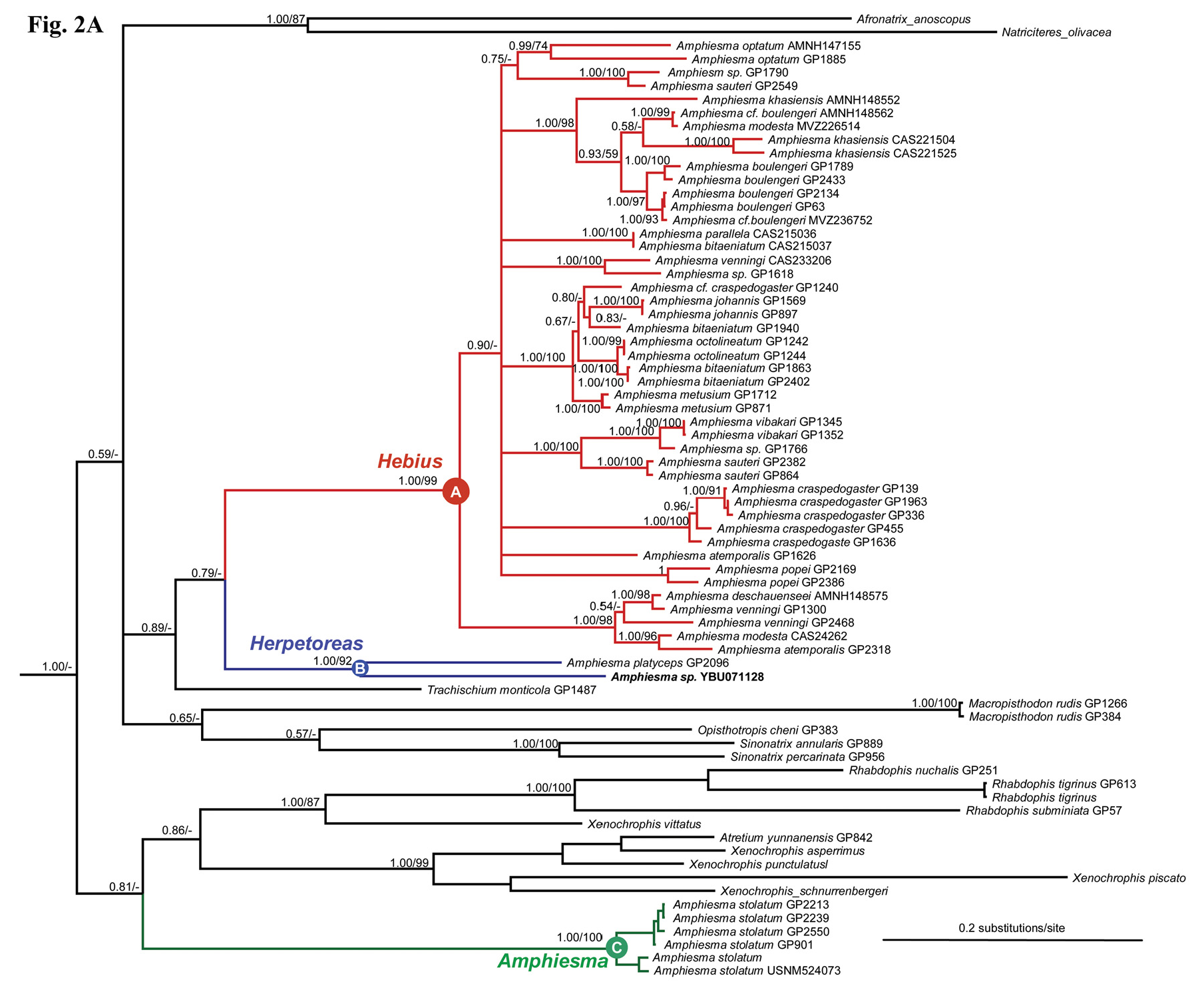 FIGURE 2A. Bayesian 50% majority-rule consensus tree inferred from mtDNA data (A)in MrBayes 3.2. The values assigned to the internodes indicate posterior probability support (before the slash) and ML bootstrap (after the slash). A node with support value <50% was indicated by “-“. Branch-support indices are not given for some internodes to preserve clarity. The partition strategy is to see the main text. 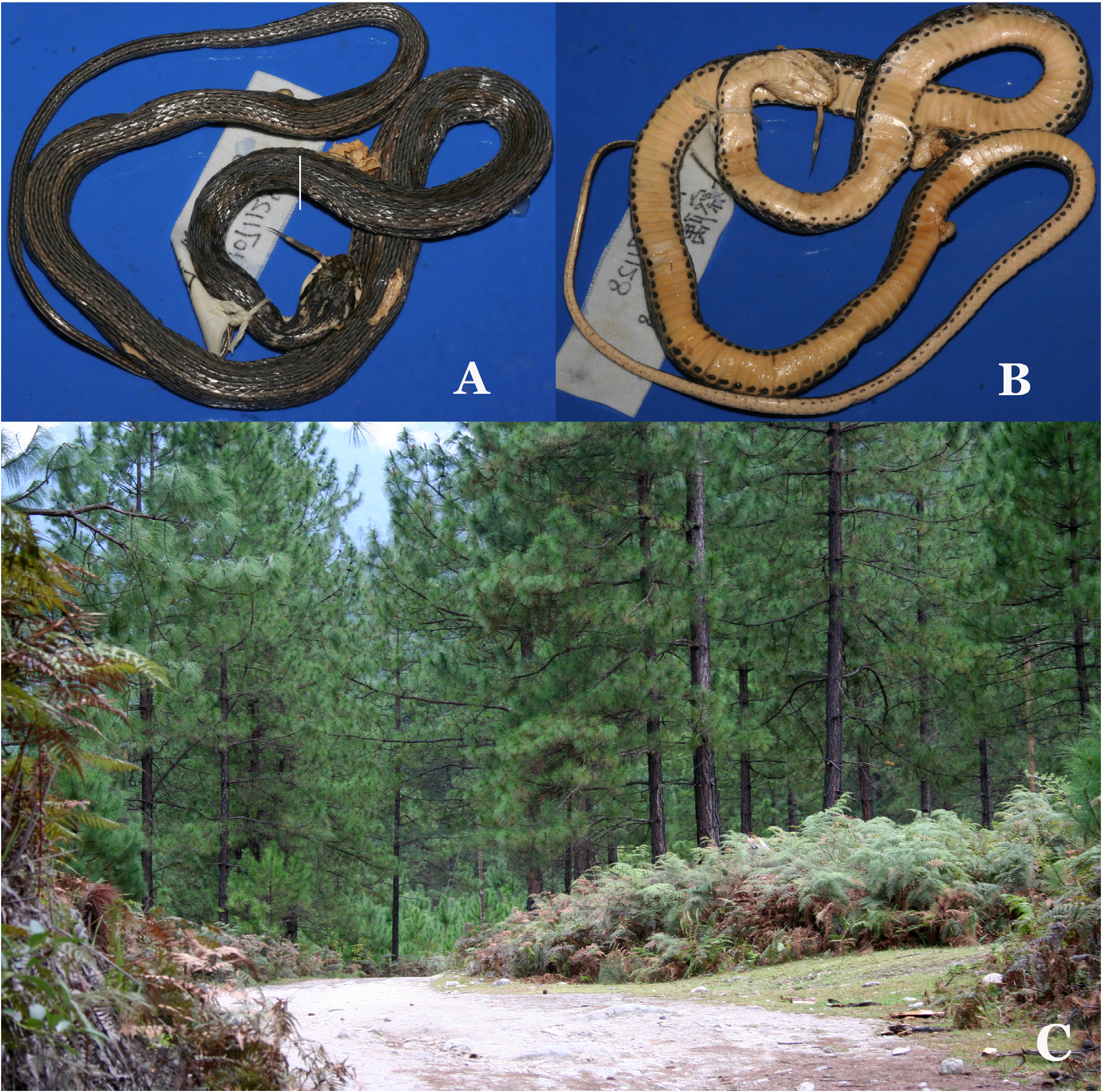 FIGURE 3. Dorsal view (A) and ventral view (B) of the holotype of Herpetoreas burbrinki sp. nov., and its habitat (C).