Head ( Figs 1, 2View FIGURES 1 – 8) 0.8 × as broad as mesoscutum, in facial view about 1.2 × as broad as long and in dorsal view temple about 0.13 × length of eye; ocellar triangle delimited by a sulcus in front and at sides; POL about 1.5 × OOL, OOL 1.6 × OD. Eye about 1.5 × as long as wide, separated by 1.2 × length of eye, and surrounded by very short pubescence. Malar space 0.62–0.65 × length of eye, malar sulcus with a triangular fovea extending 0.2 × its length. Mouth broader than malar space. Head with exceedingly fine superficial reticulation, vertex and upper face with sparse setae; vertical setae about 0.75 × OD. Antenna ( Fig. 11View FIGURES 9 – 17) with scape about 0.8 × length of eye, about 4.2 × as long as broad, nearly reaching median ocellus; pedicel 2.3 × as long as broad, slightly shorter than F 1; funicle stouter than pedicel, with each segment subequal in length (sometimes slightly shorter distally), F 1 3 ×, F 2 2.3 ×, and F 3 2 × as long as broad; clava broader than funicle, 2.1 × as long as broad and slightly shorter than F 2 plus F 3; C 1 shorter than broad but occupying nearly half length of clava, C 2 transverse, C 3 even shorter, both flat when airdried, terminal spine short; sensilla moderately numerous, in an irregular row on each segment, about 0.7 × as long as respective segment, decumbent with tip projecting slightly.

Mesosoma ( Fig. 3View FIGURES 1 – 8) dorsally convex, nearly as broad as head. Pronotum crescentic, 0.4 × as long as mesoscutum, with superficial raised reticulation and scattered setae, including a row of longer setae near hind margin. Mid lobe of mesoscutum broader than long, moderately convex, slightly metallic shiny, with raised reticulation, the areoles 7–10 × as long as broad and more superficial than on pronotum; median line complete but fine and weak; with 6 adnotaular setae on each side, the most posterior ones subequal in length to scutellar setae. Scutellum about 0.8 × as long as wide, strongly convex, sculptured like mesoscutum; submedian lines distinct, separated from reach other by about 1.4 × distance from sublateral lines, nearly parallel, anteriorly slightly bending outwards, submedian lines enclosing a space 2.4 × as long as wide; with 2 pairs of setae, anterior pair behind posterior third of scutellum, setae subequal in length, nearly as long as distance between submedian lines. Dorsellum nearly semicircular, 4 × as broad as long, divided into three areas, with lateral areas having several wrinkles. Propodeum ( Fig. 5View FIGURES 1 – 8) medially short, as long as dorsellum, but longer laterally, with depressed carina thin and distinct where separated in posterior third; reticulation similar to pronotum; spiracle oval, comparatively large with diameter slightly less than length of propodeum medially, very close to anterior margin propodeum; callus with 2 setae, one of which is longer than the other. Legs with several setae on coxae, tibiae and femora; hind coxa with fine superficial reticulation and larger areoles compared to mesoscutum; mid tibial spur slightly longer than basitarsus, and fourth tarsomere subequal in length to basitarsus. Fore wing ( Fig. 13View FIGURES 9 – 17) about 2.1 × as long as broad, extending beyond apex of gaster; costal cell about 0.7 × as long as marginal vein and 6 × as long as broad, with a row of setae; submarginal vein with 5 dorsal setae; marginal vein about 3 × length of stigmal vein; stigmal vein at about 45 ° angle, narrow at base but expanding slightly for half its length; postmarginal vein rudimentary; speculum small, closed below marginal vein; wing with moderately thick pilosity. Hind wing apically obtuse or subobtuse; cilia about 0.27 × as long as breadth of wing.

Gaster ( Fig. 7View FIGURES 1 – 8) in dorsal view pointed-ovate, tergites with raised reticulation similar to pronotum and with sparse setae; subequal in length to head plus mesosoma or 1.4 × as long as mesothorax and about 1.8 × as long as wide or 0.84 × as wide as mesosoma; T 1 occupying 0.46 × length of gaster; ovipositor sheaths slightly exerted; cerci with two pairs of cercal bristles, the longest about 1.8 × times length of next longest.

Head strongly collapsed in air-dried specimens; vertex and face with sparse setae. Antenna ( Fig. 12View FIGURES 9 – 17) with scape slightly shorter than eye, with ventral plaque about 0.24 × length of scape; pedicel about 2 × as long as broad, a little longer than F 1; proximal funicle segment subequal in width to pedicel. Sculpture similar to female.

Gastral tergites with same reticulation as propodeum and with sparse setae.

Remarks. Aprostocetus pinus  resembles A. lacunatus Graham  as follows: macropterous with fore wing extending beyond tip of gaster, hyaline, and with dense pilosity; body tending to be slightly shiny; mesosoma moderately arched; mid lobe of mesoscutum with a single row of adnotaular setae on each side and median line at least vague; cercus with one seta 1.8 –2.0× the length of the next longest seta; antenna with scape shorter than eye; and malar sulcus expanded below eye, forming a subtriangular fovea that extends more than 0.2 × the length of the sulcus. It is distinguished from A. lacunatus  by the following: body dirty yellow with dark brown areas, metallic shiny (vs black, non-metallic); antenna dark brown (vs antennal scape testaceous beneath at apex); coxae partly and tarsi mainly black, and femora and tibiae wholly yellow (vs coxae and femora mainly black, with tips of femora, tibiae partly or wholly, and tarsi mainly, testaceous); wings hyaline, venation dirty yellow (vs wings subhyaline, venation brownish testaceous to brown); midlobe of mesoscutum with fine, weak raised reticulation having areoles 7–10 × as long as broad (vs with superficial fine, slightly raised reticulations having areoles 2–3 × as long as broad); submedian lines further from each other and from sublateral lines (vs about equidistant from each other and from sublateral lines); callus with 2 setae (vs 3–5 setae); spur of mid tibia slightly longer than basitarsus (vs 0.75 × length of basitarsus), and fourth tarsomere subequal to basitarsus (vs slightly shorter than basitarsus).

Girault (1916) described Epitetrastichus semiauraticeps  , which was reared from a large bud gall on Pinus scopulorum  , and was later transferred to Tetrastichus  by Burks (1943) and then to Aprostocetus  by LaSalle (1994). Our new species can be separated from A. semiauraticeps  by the following: gaster in dorsal view pointed-ovate, and subequal in length to the rest of body (vs conic-ovate and distinctly longer than rest of body); body dirty yellow with dark brown areas, metallic shiny (vs dark metallic blue green); venation yellow (vs black); legs with femora entirely dirty yellow (vs legs golden yellow except coxae, and femora except apically); pedicel slightly shorter than F 1 (vs subequal to F 1); postmarginal vein rudimentary (vs a short but distinct postmarginal vein present), median line of mesoscutum fine and weak but complete (vs median line of mesoscutum sometimes completely absent). 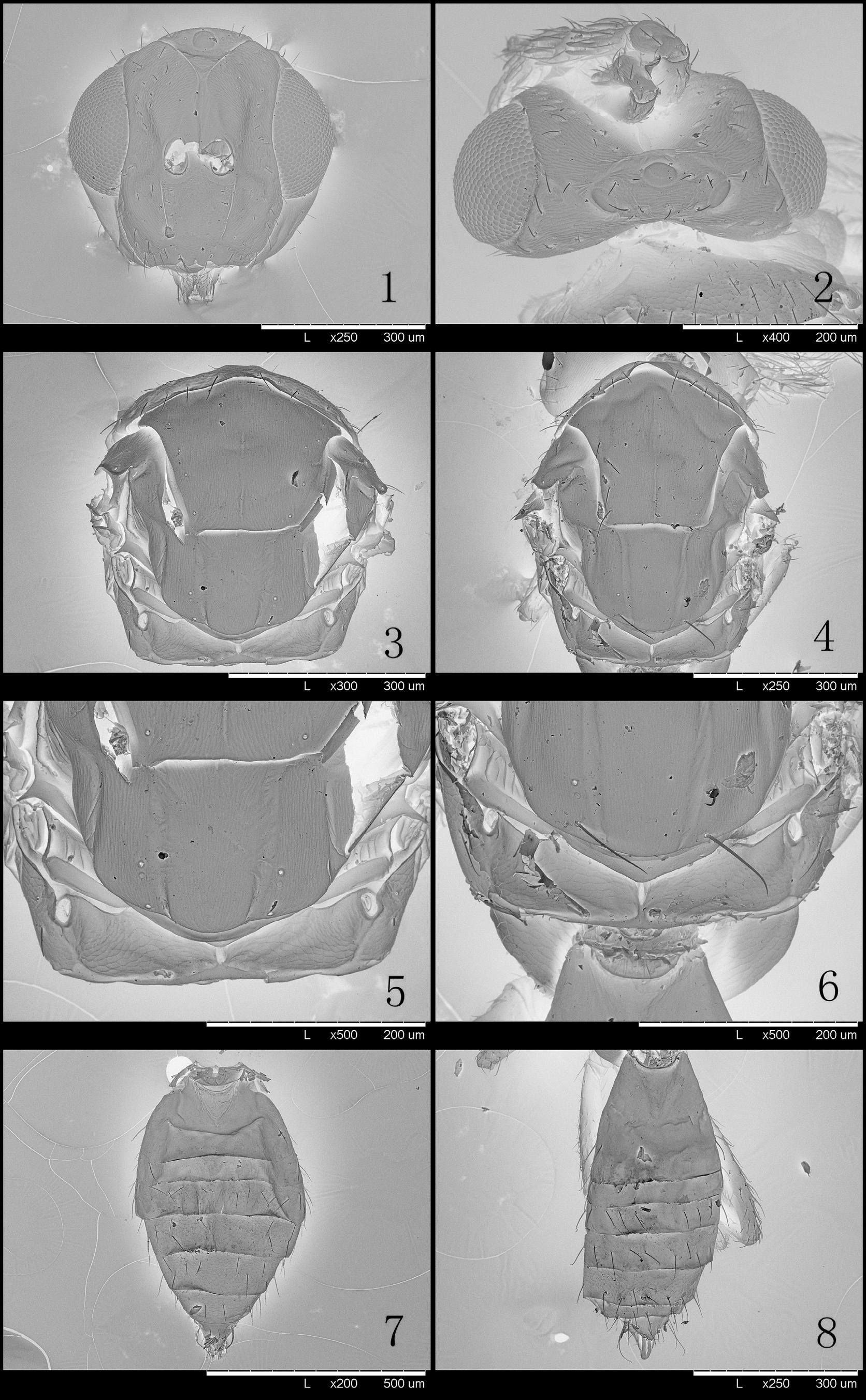 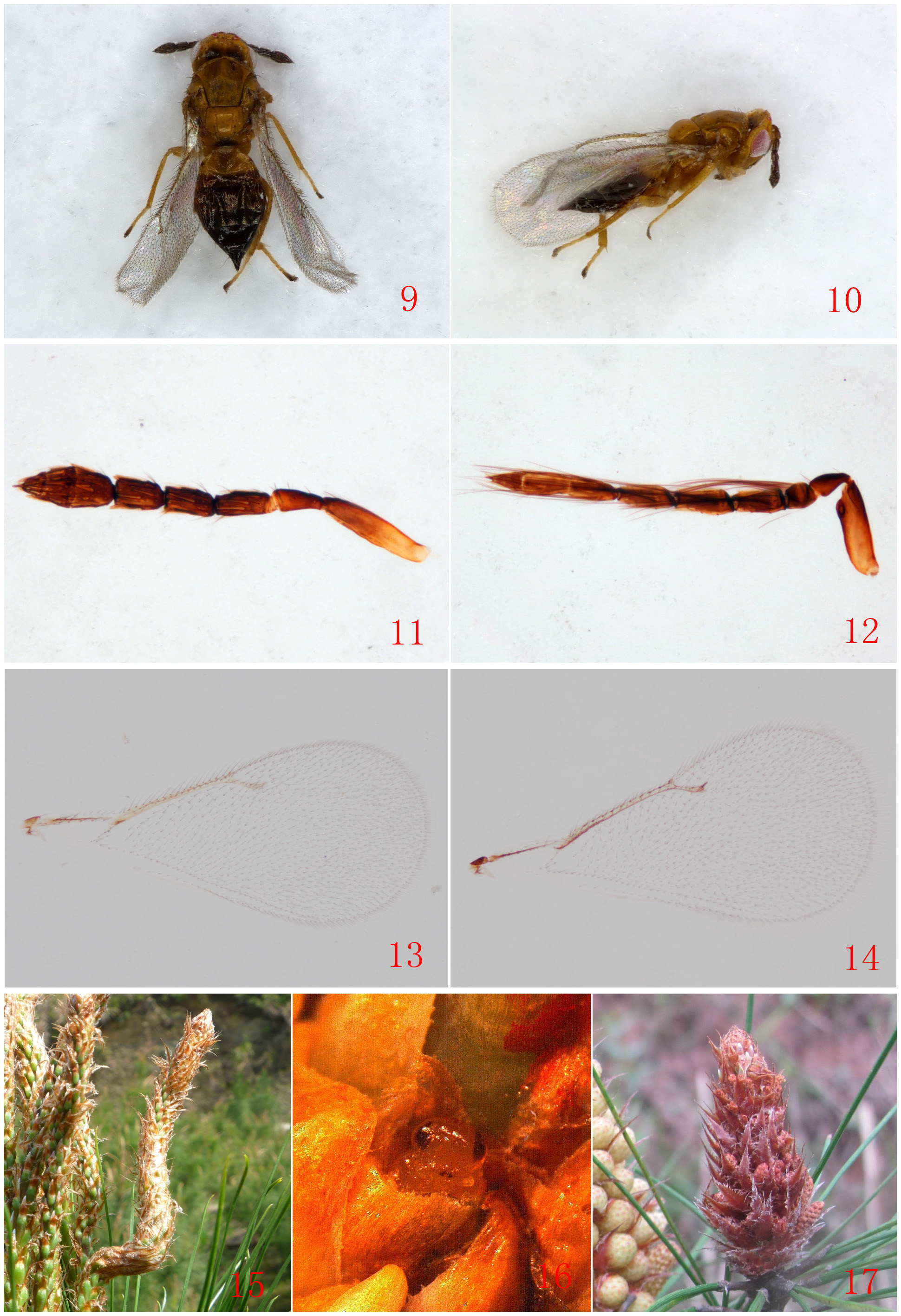