Diagnosis. Ancistrus leucostictus  differs from all other Ancistrus  in the region except A. brevifilis  (endemic to the Tuy River Basin in Venezuela), A. saudades  (from Amazon River tributaries in southern Guyana, and Guyana Shield rivers of the Orinoco Basin in Venezuela), and A. triradiatus  (from Orinoco River Basin in Venezuela) by having light, large spots on the caudal fin, abdomen, dorsum of head and body and sides (these can be obscured in preserved specimens, but spots generally remain on the fins, vs. body and fins all dark color with very small white spots, spots may be absent in preserved specimens) in all other Ancistrus  in the region. Ancistrus leucostictus  can be separated from A. saudades  by having the adpressed dorsal fin reaching to at least the middle of the adipose-fin spine (vs. to middle of preadipose plate), by having the pectoral-fin spine when adpressed ventral to the pelvic fin reaching the base of the cloacal tube (vs. short of the cloacal papilla), and by having relatively larger light spots and narrower dark interspaces on the anterolateral plates and posterodorsal head bones with the interspaces much less than half the width of the spots and at least some spots always visible in this area on preserved specimens (vs. interspaces half or greater the diameter of the spots and the spots often obscured in this region in preserved specimens; the difference in spots vs. interspaces generally works on the abdomen as well); from A. brevifilis  by having round spots on the caudal fin (vs. oval spots), and from A. brevifilis  and A. triradiatus  by having spots on the abdomen in life (vs. spots absent).

Description. Morphometrics given in Table 3. A large-sized Ancistrus  , body broadest anteriorly, greatest body width just posterior to opercles, then narrowing progressively to end of caudal peduncle. Head and body depressed, greatest body depth between level of pectoral-fin insertions and dorsal-fin origin. Caudal peduncle deep, robust, compressed posteriorly. Dorsal profile of head ascending steeply in convex arc from tip of snout to just posterior of orbits, ascending in straight line to posterior tip of supraoccipital, then descending to dorsal-fin origin. From the dorsal-fin origin descending in a slight convex arc to just posterior of dorsal-fin base, then straight to caudal fin. Ventral profile flat to slightly convex from tip of snout to pelvic-fin insertions. Abdomen flat to slightly concave to pelvic-fin insertions, from there, straight to slightly convex and sloping gently ventrally towards caudal fin.

Life colors. Base color brown and gray with medium white irregularly-shaped spots concentrated on the head and snout. Body posterior to dorsal-fin origin equally spotted. Preadipose plate and vestiges of adipose-fin spine outlined in yellow. Sides with irregular light and dark spots. Ventrum of body with light brown base color and medium irregularly-shaped white spots. Oral disk and adjacent area on chest pink to whitish. Fin membranes lightly pigmented, grayish. Spines and rays brown in color with spots on all fins. Dark interspaces on the head, anterior body, and abdomen usually less than half the width of the spots. 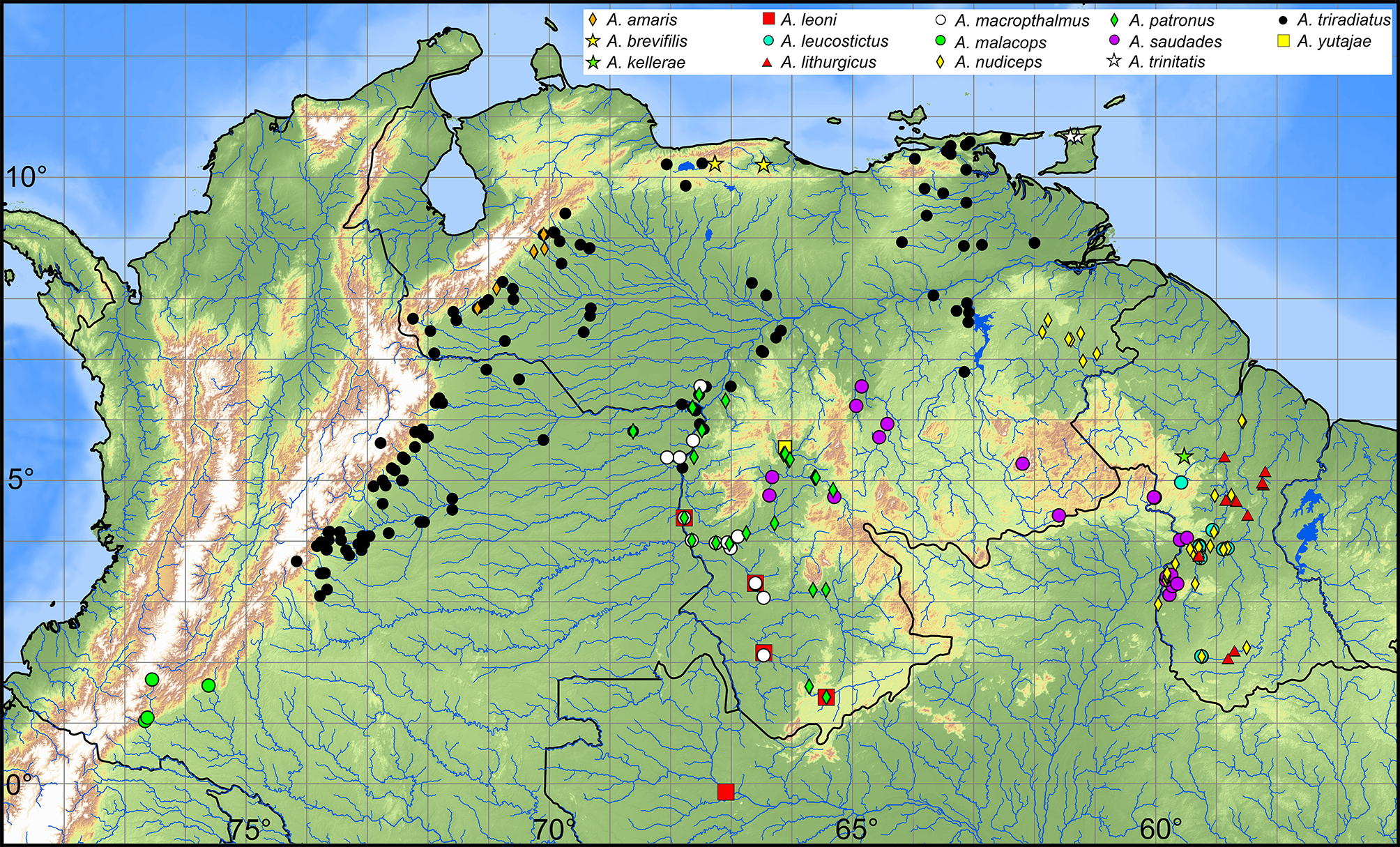 FIGURE 7. Distribution of species of Ancistrus from the northwestern Guiana Shield and neighboring regions. 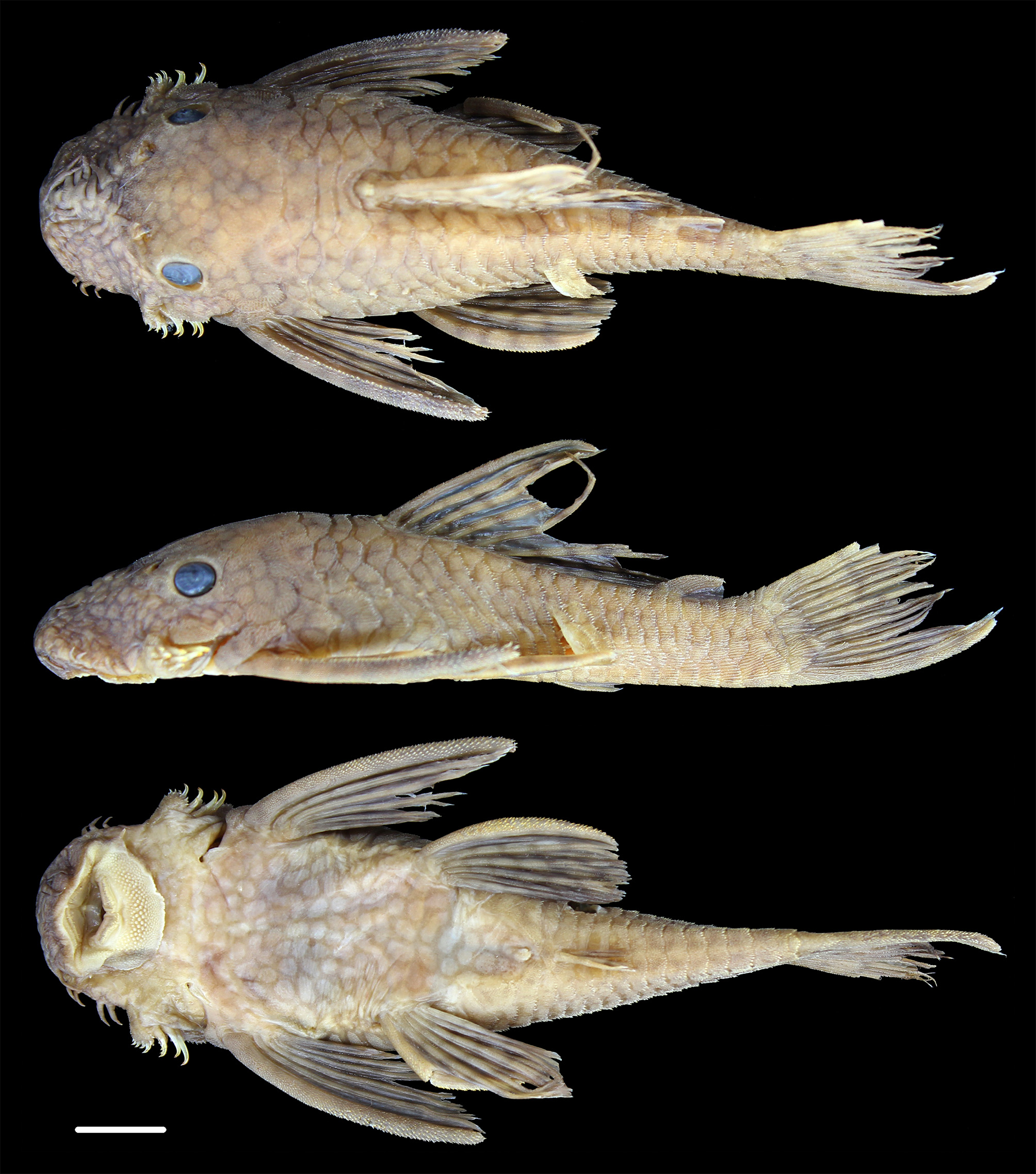