Diagnosis. Small to medium-sized, elongated limnocytherid of approximately 600 µm in length. Males with straight dorsal margin and evident cardinal angles, females with variably arched dorsal margin, clearly discernible anterior cardinal angle and variably expressed posterior cardinal angle; ventral margin markedly concave at midlength; dorsal and ventral margin subparallel. Overall shape of carapace in lateral view reniform (in males) to subreniform (in females). A sulcus and two or three smooth, poorly developed tubercles occur slightly anteriorly of mid-length; valve external ornamentation is weak. The hinge is modified antimerodont, consisting of one anterior small, smooth tooth, a central groove and a small, crenulated posterior tooth in the RV; LV with central bar smooth. A 1 with subapically flagellated setae on the third and fourth segments. Strong sexual dimorphism in thoracopod length: in females, the apical claws of T 2 and T 3 are of similar length, with that of T 1 being approximately ¼ shorter; in males, the apical claws of T 1 and T 2 are subequal while the apical claw of T 3 is approximately 2.5 times longer than either. The hemipenis has a well-developed distal lobe. The upper ramus of the clasping organ is a tentacle-like processus. The x 2 segment of the labyrinth is characteristically elongated and Y-shaped, with the bifurcated extreme adjacent to the vesica ejaculatoria.

Derivatio nominis. In honor to Dr. Gabriela Cusminsky, in acknowledgment of her contributions to the knowledge of Quaternary Patagonian ostracods.

Description. External view. In lateral view, the carapace is elongated; the anterior and posterior margins are simetrically rounded, with the latter more acuminate. The carapace of the male is reniform, with the posterior end slightly higher than the anterior one; MH situated approximately at anterior 1 / 4 of ML. The dorsal margin is straight, with marked cardinal angles, and subparallel to the ventral margin ( Fig. 2 View FIGURE 2 a–b). The female carapace is more compressed, with overall subreniform shape; the dorsal margin is slightly to broadly arched and sloping, with a well-defined anterior cardinal angle and posterior cardinal angle evident to weakly discernible; the ventral margin is broadly sinuous. MH occurs approximately at anterior 1 / 3 of ML ( Fig. 2 View FIGURE 2 c–d). In dorsal view, the anterior end is beak-shaped and the posterior end is rounded, with the LV overlapping the RV. External valve ornamentation is weak, presenting a light primary reticulation of muri and secondarily pitted fossae. A sulcus and two or three smooth, poorly developed tubercles occur slightly anteriorly of mid-length. Two rows of minute, similarly sized and shaped denticles occur in the anterior and posterior margins of both valves (only visible through SEM); the first row is located just over the free margin ( Fig. 2 View FIGURE 2 h). The valve surface presents scattered sieve-type normal pores.

Internal view. The dorsal margin is straight, with the anterior cardinal angle marked. Muscle scars as for the genus with a vertical row of four scars. The hinge is modified antimerodont, consisting of one anterior small, smooth tooth, a central groove and a small, crenulated posterior tooth in the RV ( Fig. 2 View FIGURE 2 e–f); LV central bar smooth. The marginal zone is more developed anteriorly, approximately twice as broad anteriorly compared with the posterior margin, with few straight, unbranched marginal pore canals.

Soft parts. The four anteriormost appendages are identical for both sexes, except for the morphology of a single seta in A 2 (see below); the three thoracopods, for their part, present strong sexual dimorphism, both in relative size and the chaetotaxy of the basal segment.

The antennule (A 1) is 5 -segmented, with subapically flagellated setae on the third and fourth segments ( Fig. 3 View FIGURE 3 a). The basal segment bears no setae; the second and third segments bear 1 seta each; the fourth segment presents 6 setae; the fifth segment has 3 setae, one of them proximally fused with an aesthetasc.

The antenna (A 2) comprises 5 segments plus the exopod, which is a long, articulated seta (the spinneret seta) ( Fig. 3 View FIGURE 3 b). The first four segments present bunches of setulae. The first segment is devoid of setae; the second presents the spinneret seta. The third segment bears 1 seta, smooth in the female and plumose in the male: its lower part is smooth, while the upper part presents numerous long flagella. The fourth segment presents 7 setae; 3 are plumose and 1, located medially, is an aesthetasc. The fifth segment bears 3 apical, unequally long claw-like setae.

The maxillule ( Mx) presents 3 masticatory endites and bears a 2 -segmented palp and a respiratory plate (Fig. 4 d). The second segment of the palp is subrectangular and bears 4 setae.

Between Mx and the first walking leg is a so-called sternum, an elongated structure consisting of a central plate and lateral extensions, associated with the masticatory apparatus.

Genital lobe of the female without special features. The hemipenis ( Fig. 3 View FIGURE 3 g) has a well-developed distal lobe. The upper ramus of the clasping organ is a tentacle-like processus. The x 2 segment of the labyrinth is characteristically elongated and Y-shaped, with the bifurcated extreme adjacent to the vesica ejaculatoria.

Distribution. The species has been recorded both living and fossil in Southeastern Pampa, mostly in locations close to the Atlantic coast ( Fig. 1 View FIGURE 1 ). As most of the research involving Quaternary microfossils that has been carried out in the Pampean area is related to past sea level fluctuations reconstruction, and therefore most of those studies included only seaside locations, the fact that Limnocythere cusminskyae sp. nov. has been found almost exclusively in the coastal area is quite probably a sampling bias artifact rather than a reliable indication of the species’ (past) distribution. Laprida (2006) found live specimens of L. cusminskyae sp. nov. mostly in the shallow lakes Chascomús, Salada Grande, Los Horcones, Laguna del Monte and in the Arroyo Grande creek. Bertels & Martínez (1990; 1997) recorded the species in Holocene sediments from an exposed section along the margin of the Napostá Grande stream, at 2.5 km from its outlet to the ocean. The sediments, corresponding to the Bahía Blanca Formation, consist of shallow marine and transitional littoral-estuarine deposits. Ferrero (1996) reported it from a Holocene outcrop on the northern margin of the Quequén Grande river and in Late Pleistocene sediments ascribed to the Canal 5 Formation (Ferrero 2009) drilled near the Mar Chiquita Lagoon. Laprida (1998) found the species in samples taken from an outcrop on the right margin of the Canal Nº 15 channel, corresponding to the early Holocene Destacamento Río Salado Formation, while Bertels-Psotka & Laprida (1998) recovered a single valve from Holocene sediments outcropping near that location (at the junction of Provincial Route Nº 11 and Canal Nº 15 channel), corresponding to the Cerro de la Gloria Member of Las Escobas Formation.

Remarks. Several limnocytherids recorded in the Pampean region have been likened to the well-known Neartic species L. staplini and, in one case, L. bradburyi Forester. Cusminsky& Whatley (1996) and Cusminsky et al. (2005) considered the material described as L. aff. L. bradburyi by Bertels & Martínez (1990; 1997) to consist of juveniles of L. rionegroensis . This would be the northernmost record of the latter species, and the only one outside the Patagonian region. L. rionegroensis is known both after bisexual and parthenogenetic populations.

With regards to soft parts morphology, presently it is only possible to compare L. cusminskyae sp. nov. with L. staplini , whose appendages were described by Delorme (1971). This author makes no mention whatsoever of sexual dimorphism in thoracopod length; therefore, both species can be easily distinguished on the basis of soft parts analysis.

Lastly, it can be mentioned that Kihn & Pall (2013) report a limnocytherid left in open nomenclature, Limnocythere sp., from a small shallow lake in the inland Pampean region; while the line drawings of valves illustrating their work show a certain resemblance to L. cusminskyae sp. nov., their poor quality and lack of description of the material prevent further comparisons. 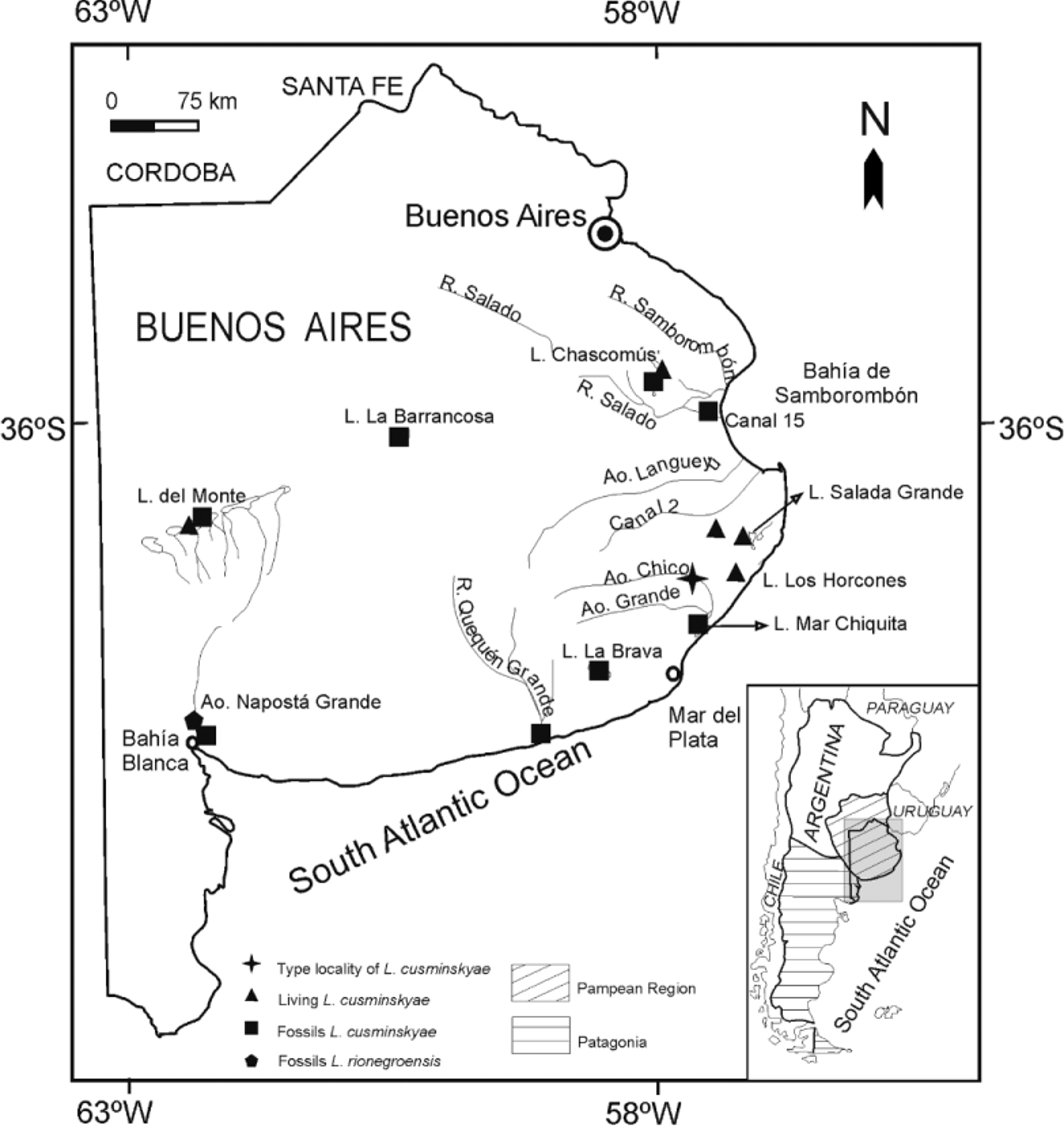 FIGURE 1. Location map of the study area, including sites where Limnocythere cusminskyae sp. nov. and L. rionegroensis have been recorded. 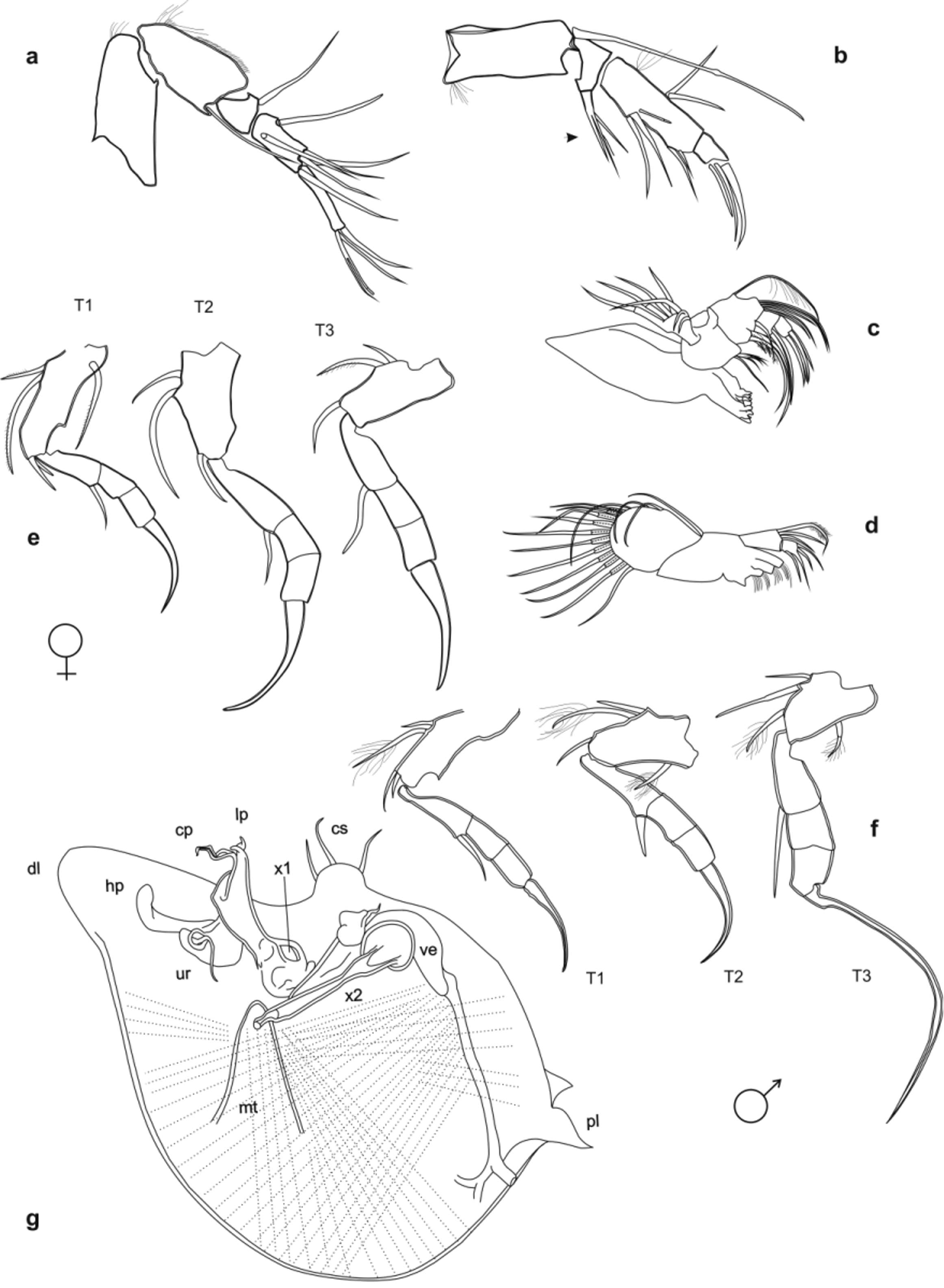