Bite marks preserved on bone are not uncommon in the vertebrate fossil record and have the potential to yield insights into aspects of behavioral evolution and ecology ( Buffetaut, 1983; Currie and Jacobsen, 1995; Erickson et al., 1996; Tanke and Currie, 1998; Hanna, 2002; Avilla et al., 2004; Katsura, 2004). Determining whether bite marks and other injuries preserved on fossil bones are the result of interspecific or intraspecific conflict, predation, post-mortem scavenging or disease, however, is often difficult. Furthermore, positive identification of the species that caused the injury and inferences about behavior from such traces are far more challenging tasks. Here we report a juvenile tyrannosaurid skeleton ( BMR P2002.4.1  ) that exhibits a series of partially healed lesions along the left maxilla and nasal, which we interpret as a bite mark injury. By utilizing the Extant Phylogenetic Bracket (EPB) method ( Witmer, 1995), we interpret this injury as resulting from intraspecific aggression between two similarsized juvenile tyrannosaurids and discuss the insights the specimen provides for juvenile tyrannosaurid behavior.

Specimen BMR P2002.4.1  was collected from the upper half of the Hell Creek Formation of western Carter County, Montana in 2002 ( Fig. 1View FIGURE 1) and is latest Maastrichtian in age. Exact coordinates of the collection site are on file in the paleontology collections at the Burpee Museum of Natural History, Rockford, Illinois (BMR), where the specimen is housed. The tyrannosaurid skeleton was buried in a lenticular clay-ball conglomerate unit composed of poorly sorted sand, silt, rounded green clay rip-up clasts, and diagenetically produced siderite nodules that partly encased several bones. The bone-bearing unit displayed a rapid lateral variation in thickness from 12 to 40 cm and was overlain by a massive, poorly cemented, cross-bedded sandstone ( Henderson and Harrison, 2008).

BMR P2002.4.1  consists of 145 bones of a small tyrannosaurid, approximately seven meters in length. Based on histological characters, degree of skeletal fusion, and thin-walled bone structure, BMR P2002.4.1  is considered a late juvenile animal rather than a subadult since it had not yet reached a phase of rapid growth ( Erickson et al., 2006; Henderson and Harrison, 2008).

There is little doubt that the loss of the left lateral process of the nasal and the lesions to the left maxilla of BMR P2002.4.1  occurred at the same time. This is indicated by the uniform shape and size of the lesions and the presence of healed bone tissue along their edges. In addition, the distribution of the lesions along a gently arcuate line and the similar degree of healing supports the hypothesis that these injuries were inflicted simultaneously, probably from a bite to the face. The lateral curvature of the muzzle described above likely resulted from differential growth of the face following the loss of the left lateral nasal process.

The only fossil vertebrates preserved in the Hell Creek Formation that are large enough to puncture the skull of BMR P2002.4.1  are crocodilians and theropod dinosaurs. The lenticular-shaped lesions are inconsistent with the circular cross sections of crocodilian teeth, but they are consistent with the lenticular cross sections of juvenile theropod teeth. The maxillary teeth of BMR P2002.4.1  are laterally compressed; a characteristic of juvenile tyrannosaurids in general. The size, shape, and spacing of the maxillary teeth of BMR P2002.4.1  correspond well with the size, shape and spacing of the lesions, indicating that this animal was bitten by another juvenile tyrannosaurid of its size. The location and spacing of the facial injuries indicate that the bite was inflicted by the grazing anterior maxillary teeth of an adversary, which was in front of and facing BMR P2002.4.1  ( Fig. 4View FIGURE 4 A– B). The smooth cortical bone covering the edges of the lesions indicates that the bite was not fatal and healing was well underway or complete at the time of death.

The lesions in BMR P2002.4.1  provide insight into the social behavior of juvenile tyrannosaurids. Evidence for face biting is not uncommon in theropod dinosaurs ( Tanke and Currie, 1998). While intraspecific predation and cannibalism have been previously suggested in tyrannosaurids ( Tracey, 1976; Naeye, 1996), true predation and cannibalism usually involve a much larger individual attacking a smaller one ( Tanke and Currie, 1998) and are not likely scenarios for the bite described here.

While social behavior cannot be directly observed in or unequivocally inferred from the fossil record, it can be inferred from evidence of eating and from injuries ( Tanke and Currie, 1998; Avilla et al., 2004; Katsura, 2004). The ability of tyrannosaurids to puncture and crush bone is well documented ( Abler, 1992; Erickson and Olson, 1996; Erickson et al., 1996; Hurum and Currie, 2000; Meers, 2002), and evidence of feeding is relatively common at fossil vertebrate sites ( Chure et al., 1998). Behavior can also be inferred using the Extant Phylogenetic Bracket (EPB) method ( Witmer, 1995). This method is generally used for soft-tissue reconstruction and behavioral inference by comparing the osteological correlates of living members of a group to infer a characteristic in an extinct member. The EPB has previously been used to interpret nesting and parental behavior in non-avian theropods ( Varricchio et al., 2008), using extant crocodilians and birds as living members of Archosauria. A similar model was used for the purposes of this study, where intraspecific aggressive behaviors were investigated in extant crocodilians and birds.

Erickson at al. ( 2006) indicate that Tyrannosaurus rex  reached sexual maturity at 14 years of age. BMR P2002.4.1  has been histologically determined to be 12 years old at the time of death ( Erickson et al., 2006). Because BMR P2002.4.1  was probably not sexually mature, we suggest that the injury did not likely result from courtship behavior.

Aggression in dominance hierarchies and territoriality between extant crocodilians commonly result in conflict and injury ( Webb and Messel, 1977). Territoriality is most common in small groups, however, whereas dominance hierarchies are typically seen in large communities and involve more massive individuals ( Lang, 1989). Saltwater crocodiles are territorial and aggressively display and vocalize during confrontations, especially between two males, and these conflicts can include biting the face of an opponent. This aggression may be brought on by the defense of foraging areas, basking locations, access to mates, or a combination of these factors ( Lang, 1989). We speculate that the facial injury of BMR P2002.4.1  was the result of a territorial or dominance bout, similar to those observed in extant crocodilians.

While juvenile tyrannosaurids are both rare and poorly known with little evidence upon which to infer their behavior, injuries that have been phylogenetically determined as bite marks suggest behaviors such as intraspecific aggression. Placement of BMR P2002.4.1  on a logistic growth curve for Tyrannosaurus rex  indicates that the specimen was not yet sexually mature ( Erickson et al., 2006), suggesting that this behavior was not related to courtship or mating and that juvenile tyrannosaurids engaged in agonistic behavior prior to reaching sexual maturity. 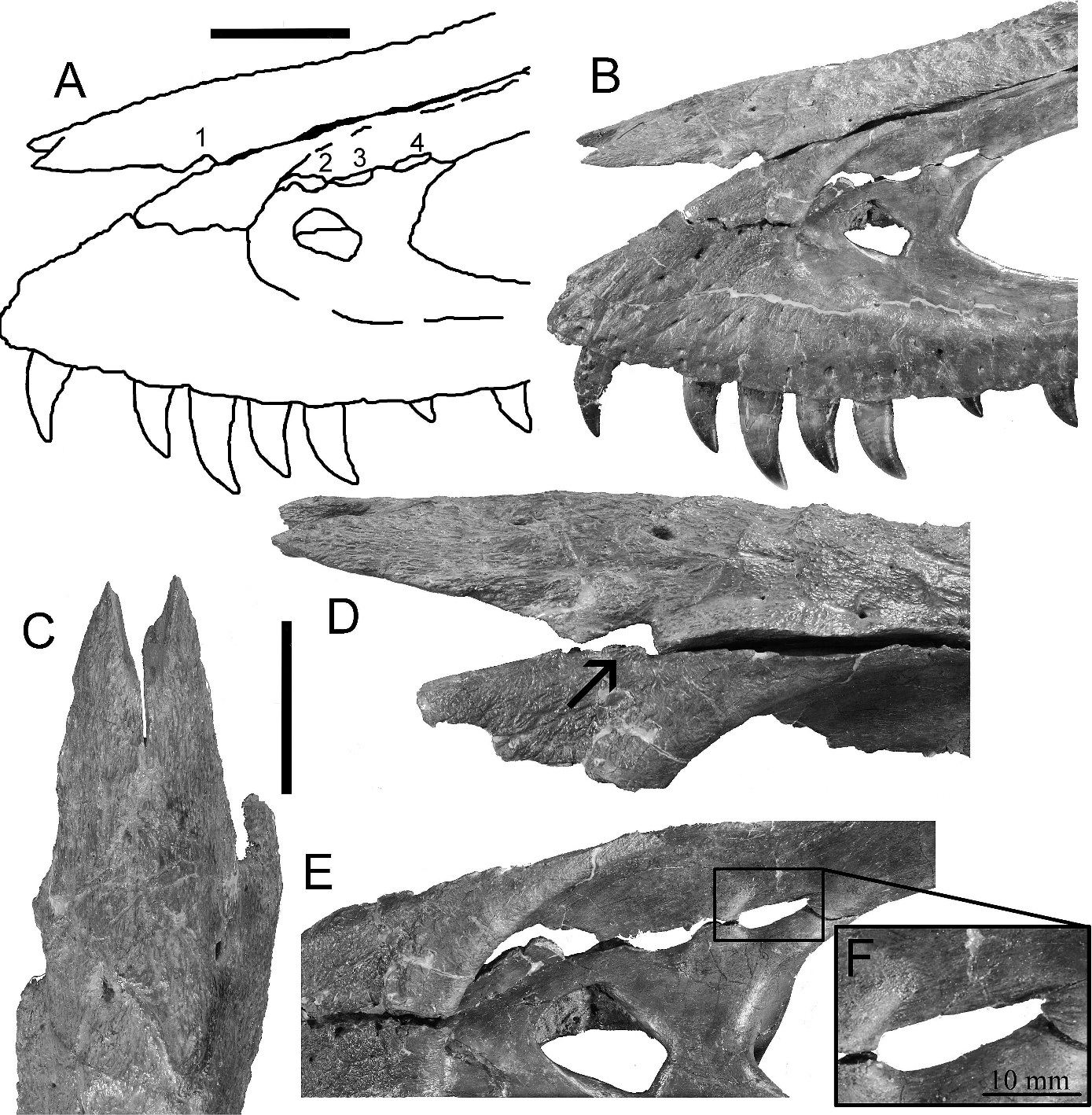 FIGURE 3—Dorsal view of the skull of BMR P2002.4.1. The central line illustrates the curved nasal and resulting deformation of the skull due to the injury. Scale bar = 10 cm. 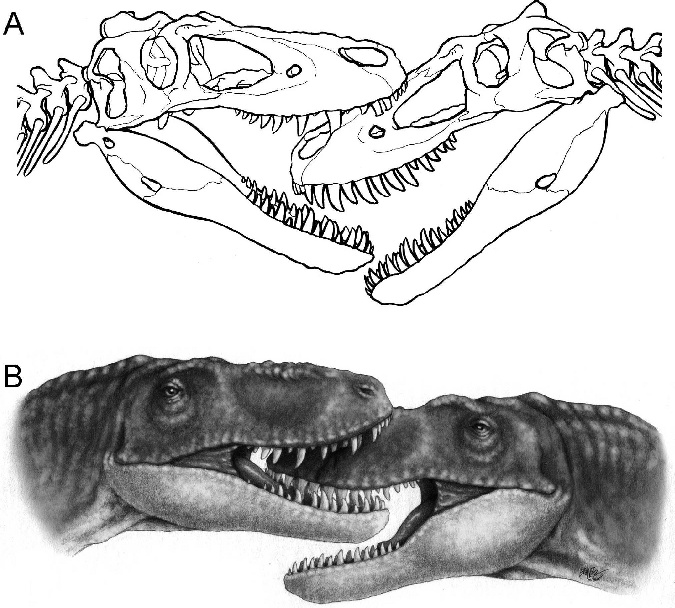 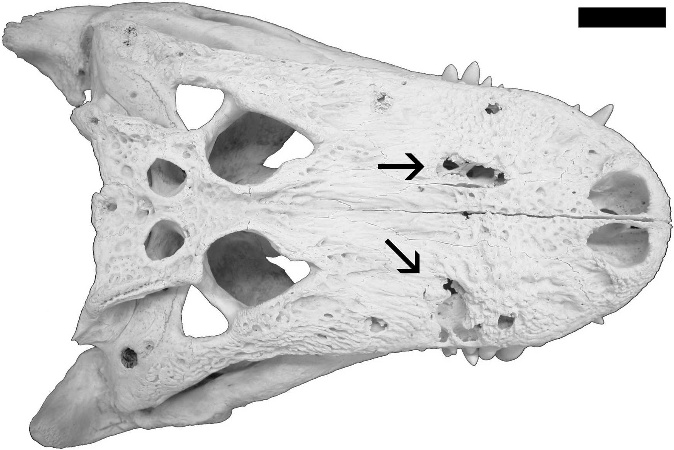