Description Female (collected in vicinity of Svalbard). Carapace ( Figs 2View FIGURE 2 A –B; 4 A; Table 3). The carapace is 1.9–2.3 mm long, with a height of 0.82–0.98 mm (37.3 % ± 2.3 %) (N. B. all values have been standardized by expressing them as percentages of the carapace length (CL) of the individual) and breadth of 0.7 mm (31.5 % ± 3.0%). There is a sculpture consisting of a few striae running parallel to ventral margin. The posterior dorsal corner of the right valve bears two spines ( Fig. 2View FIGURE 2 C), whereas on the left valve there is one small spine at the PDC. The maximum carapace height is at about mid-length. The rostra are similar in length (11.7 % ± 0.4 % CL), and similar in length to the incisures, which show some disparity in length - the left incisure is 11.3 % ± 1.5 % CL and the right incisure is 10.0% ± 0.5 % CL. There is a shallow sulcus between the shoulder vaults. The left asymmetrical gland opens anterior to the posterior end of the hinge between the two carapace valves. The gland on the right valve is on the curve of posterior ventral corner.

Frontal organ ( Fig. 2View FIGURE 2 D; Table 3). The FO is straight, (37 % CL) and extended just beyond the end of the limb of the first antenna. There is no clear division between stem and capitulum and the whole organ is bare without spines or setae and its tip is rounded. Its total length is 23.8 % ± 2.2 % CL.

First antenna ( Fig. 2View FIGURE 2 D; Table 3). The limb consists of five segments and its overall length is 17.8 ± 2.0% CL. Its segments are differentiated; the first being 35 % of the total antennal length, and the second segment 50 %. Both segments are bare. The fourth segment carries two sensory setae (a- and b-setae), and the fifth segment carries three, two of which are sensory (c- and d-setae) and one is long and distally carries fine spinules (e-seta). Sensory setae are all similar in length, about 13–14 % CL, whereas the e-seta is twice their lengths (27.0 % CL).

Mandible ( Fig. 2View FIGURE 2 H; Table 3). Both distal and proximal tooth edges consist of six sub-serrate teeth and two spines. Three setae are present on outer face of the basale, two are short, and the third is longer, and situated subdistally to the two former. On inner margin, sub-distal to toothed edge, there is a single seta. Typically for Conchoecinae there is a single, tiny seta located on a small process. Exopodite is represented by a long plumose seta situated on outer margin of the basale. The inner margin, opposite to the exopodite, is covered with a patch of fine setules. First endopodite segment carries a distal plumose seta on ventral margin, and dorsally two setae are present, one is bare and inserted medially, the second is plumose and inserted on the margin. The second segment has two ventral setae and three dorsal. One of the dorsal setae is plumose, but the rest are bare. The third segment possesses two spinose claw-like setae terminally and five shorter and thinner setae. Dorsal margin in distal part is covered by a patch of fine setules.

Maxilla ( Fig. 2View FIGURE 2 I; Table 3). Basal segment has three setae on inner margin, one of which is plumose, and the other two are bare. There are six setae on the outer margin. On the distal margin there is a single seta that extends to the end of the limb. The outer distal corner is covered by several small spines. Distal segment carries three terminal distal claw-like setae and two inner setae. Inner distal margin of the segment carries a clump of fine setules.

Fifth limb ( Fig. 2View FIGURE 2 J; Table 3). The epipodial setae are in a three groups of five, five and seven setae (proximal group with additional short, simple seta). Coxale - first endite has two setae, one bare, and one plumose. Second endite carries five setae, one is very short, spine-like and two are plumose. Third endite ventrally carries a group of six setae. The basale has six setae in proximal ventral group and three setae in distal ventral group. There is a long, bare seta on dorsal margin, which is the remnant of the exopodite, and laterally single plumose setae. Surface is covered proximally by fine setules. First endopodite segment has three bare setae, two ventrally and one dorsal. The second segment carries three unequal terminal setae.

Frontal organ ( Fig. 3View FIGURE 3 D; Table 3). The FO is relatively shorter than the female’s (18 % CL), and shorter than the limb of the first antenna. The stem and capitulum are fused. The tip is rounded, and carries short setae along the dorsal and ventral margins. Its total length is 37.2 % ± 3.3 % CL.

First antenna ( Fig. 3View FIGURE 3 D; Table 3). The total limb length is 43.3 % ± 0.5 % CL, which is much longer than the female’s. First segment is 51 % the length of total limb, and the second segment is 38 %. Close to the midpoint of the second segment is a seta wraps around the stem of FO ( Fig. 5View FIGURE 5 A). The c-seta is shorter than in the female (6.7 % ± 0.8 % CL), whereas the a- and b-setae are similar in length, and only little shorter than the lengths of the d- and esetae. The e-seta carries the oval pad of hair-like setae which is one of the characteristic features of the genus ( Fig. 5View FIGURE 5 B). The distance of the distal margin end of the oval pad to end of the seta is 12.0% ± 0.4 % CL. Proximal of the pad plate are inserted several short distally pointing spinules. 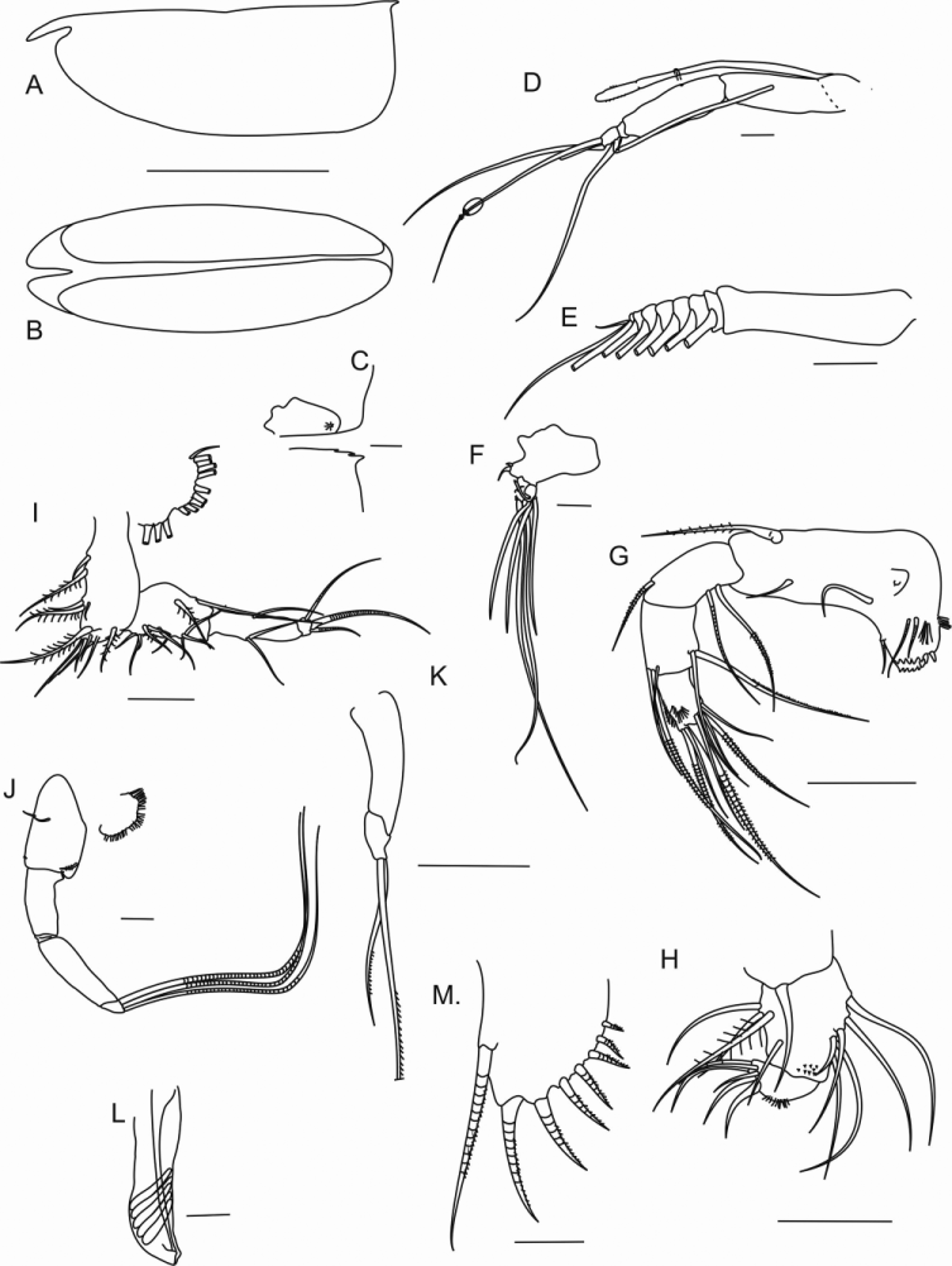