Distribution: To date, found only at type locality

Color — preserved animals have a milky white dorsal surface with ovaries appearing as dark brown spots that form a radial pattern. White intestinal branches are visible through the epidermis. The ventral surface is white.

Form — oval body shape, margins without folds except for the ones forming the tentacles. The two specimens measured 12mm x 10 mm and 11 mm x 9 mm, respectively. A very conspicuous sucker is located right in the center of the ventral surface, posterior to the pharynx ( Figs. 9 View FIGURE 9 and 10 View FIGURE 10 ).

Tentacles — Short (~ 600 µm), blunt, marginal tentacles formed mainly by the elongation of the body margin rather than the folding of it ( Fig. 6 View FIGURE 6 ).

Eyes — Few and minute, scattered over the tentacles. Cerebral and marginal eyes absent.

Digestive system — the mouth is a small opening, anterior to the brain ( Fig. 8 View FIGURE 8 A). The very muscular and cylindrical pharynx is directed forward and located in the anterior half of the worm, just anterior to the sucker. It folds back on itself in an S­shape, possibly due to a preservation artifact ( Figs. 8 View FIGURE 8 A and 10). The pharynx connects to a median intestinal branch which itself extents anteriorly dorsal to the brain, and posteriorly almost to the body margin. The posterior part of the median intestinal branch divides into 6 to 8 large, radial branches and 4 smaller ones just dorsal to the pharynx ( Fig. 7 View FIGURE 7 ). An anal pore is present on the medial intestinal branch just prior to the terminal end of the branch itself ( Fig. 7 View FIGURE 7 ). An anterior vesicle opening to the exterior was observed, but there is no evidence of it being connected or related to the digestive system.

Gonopores — pores are well separated from each other. The female pore is posterior to the male pore and located well anterior of the sucker.

Male copulatory apparatus — testes are scattered ventrally all over the body but are especially concentrated in the posterior end. The male apparatus is rather small compared to the size of the animal. A free prostatic vesicle (125 µm) is located just dorsal to the male atrium ( Fig. 8 View FIGURE 8 ). The seminal vesicle is larger than the prostatic vesicle (175 µm), and is located posterior to the atrium. In addition, the seminal vesicle is connected to an accessory storage vesicle containing a basophilic substance, possibly sperm ( Figs. 8 View FIGURE 8 and 10 View FIGURE 10 ). This accessory vesicle wraps itself dorsally around the seminal vesicle. A deep atrium houses a pointed stylet (175 µm).

Female copulatory apparatus — The ovaries are dorsal and scattered over the entire body, fanning out in a radial pattern from the pharynx ( Fig. 6 View FIGURE 6 A). Two small uterine trunks are present behind the pharynx. Numerous uterine vesicles are present ( Figs. 6 View FIGURE 6 A and 9). The female atrium is not very deep and connected to a simple vagina, which in turn connects to oviducts.

Both, Faubel (1984 a) and Prudhoe (1985) are in agreement of the genus Oligocladus   in the Euryleptidae   . Therefore, either classification system may be used for its identification. Conspicuous characters such as a digestive system with a median main intestinal branch, a plicate, cylindrical pharynx extending anteriorly to the level of the brain, a male copulatory complex located anterior to the female one, and a true free prostatic vesicle, clearly place this species in the family Euryleptidae   . Among the Euryleptidae   , three genera share the possession of an anal pore in the main intestinal branch, Oligocladus   , Cycloporus   , and Leptoteredra   . However, only Oligocladus   and Cycloporus   also possess a pair of uterine trunks with multiple uterine vesicles (Faubel 1984).

Additionally, Hadenfeldt (1929) recognizes the position of the brain posterior to the mouth as unique to the genus Oligocladus   , with only two species. According to Faubel (1984), the anatomy of O. auritus   is not very well known, although Lang (1884) placed it into this genus because its brain is posterior to the mouth. Thus, the position of the brain of O. voightae   supports the placement of this species in the genus Oligocladus   . Furthermore, the general anatomy of O. voightae   corresponds well with that of O. sanginolentus   with the exception of the presence of two sharply­defined clusters of cerebral eyes and an anteriorly trifurcated intestinal trunk in the latter species ( Prudhoe, 1985).

It is interesting to note that the two newly described species so far have been collected only from deep­sea wood deployments heavily colonized by wood­boring clams (species of which are currently being described, Dr. J. Voight, Chicago Field Museum, pers. comm.). Previously, Turner (1978) demonstrated the importance of deep­sea wood deployments in the establishment of a highly diverse community, consisting of woodboring bivalves, predatory polychaetes and gastropods, galatheid crabs, echinoderms and most likely fish. With respect to flatworms, Turner (1978) reports a single specimen of a predatory turbellarian only; the most abundant taxa of her study being gastropods and polychaetes.

This contrasts sharply with polyclad densities found at Escanaba Trough and ODP. In August 2004, 149 specimens were collected from four 18 inch x 4 inch x 4 inch pieces of lumber at Escanaba Trough that had been deployed there in July 2002, and in July 2003, 47 specimens were collected from ODP 1026 B and 33 specimens from near Baby Bare Seamount off identical deployments made in September 2002 (Dr. J. Voight, pers. comm.).

The ecological function of the two newly described species may be inferred from known predatory behavior of other polyclads. Acotyleans of the families Leptoplanidae   and Stylochidae   are known to prey on rock and pearl oysters ( Newman et al. 1993, O'Connor & Newman 2001), blue mussels ( Galleni et al. 1980, Villalba et al. 1997), barnacles ( Murina et al. 1995), and cultured giant clams ( Newman et al. 1993). Their impact can be substantial, as they often feed exclusively on spat or juvenile bivalves, resulting in as much as 90 % mortality ( Newman et al. 1993). Predation by a stylochid polyclad on oysters has been reported also for the US Atlantic and Gulf of Mexico coasts ( Provenzano 1961, Webster & Medford 1961, Christensen 1973, Chintala et al. 1993), and Newell et al. (2000) were able to show that small (<5 mm 2) polyclads were instrumental in significantly reducing the numbers of young oyster spat (less than 3 weeks postsettlement) in Chesapeake Bay.

Recently, Ritson­Williams et al. (2006) described the predatory behavior of a planocerid, concluding that this flatworm uses tetrodotoxin to capture and kill its mollusk prey. From the observed ecological association of Anocellidus profundus   and Oligocladus voightae   with deep­sea bivalves, it is tempting to speculate that the flatworms may use a toxin such as tetrodotoxin to subdue their prey. At this point, however, such predator­prey interactions, and the presence of toxins in deep­sea flatworms remain to be demonstrated. 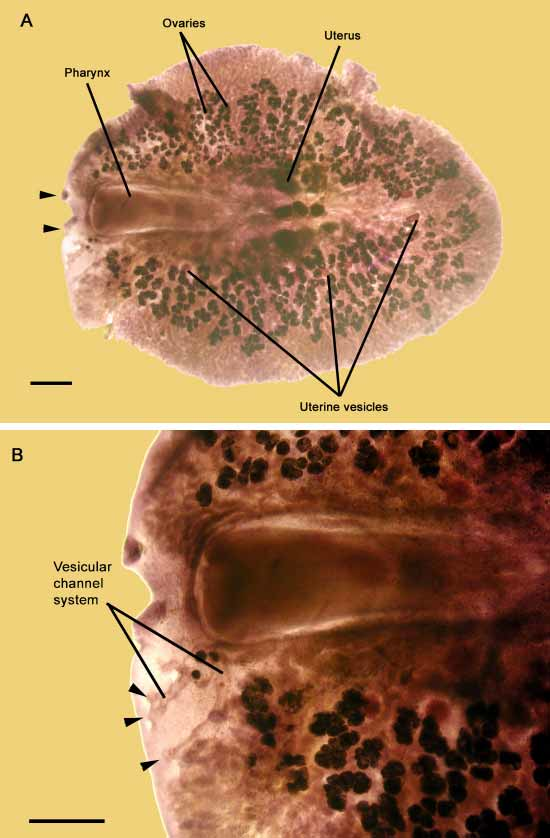 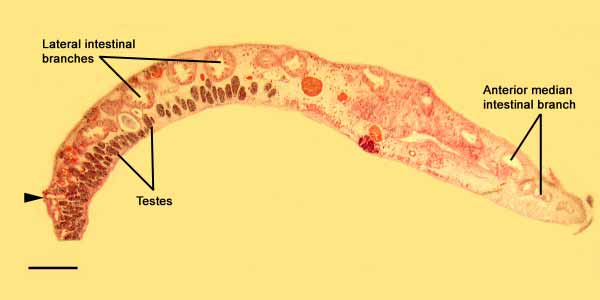 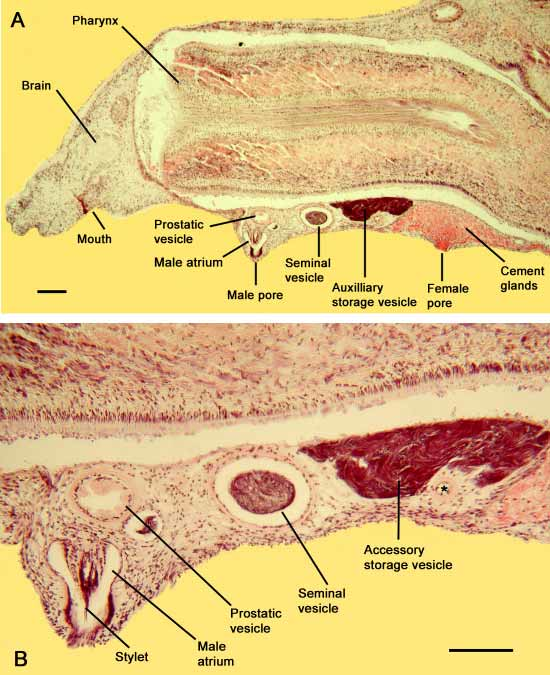 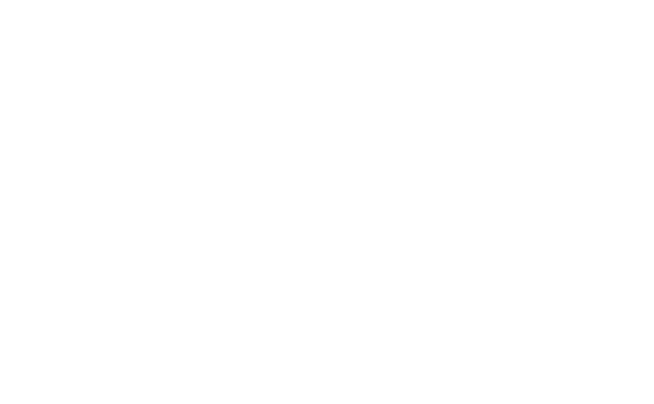