Etymology: The specific epithet is derived from the Greek amanita which is a mushroom genus and refers to the fact that colonies resemble this kind of mushroom.

The colonies are very abundant in some reef patches in Bocas del Toro, especially those associated with high water movement, such as in canals (Bocas del Drago, Sachen, Hospital Point) or open sea (Swan Island, Caves, Punta Vieja). The colonies are usually hanging upside down or attached to vertical surfaces.

The colonies consist of one to several small rounded or conical heads with cylindrical stalks protruding from a thick common basal test. Maximum stalk length was 5 cm but most were smaller with 1 cm in diameter. The largest colony analyzed was about 5 cm in maximum diameter. The color in life is red, purple, pink or orange, but when preserved the general color faints while the zooids are still orange or yellowish. There is an elongate patch of darker color between the siphons of each zooid, showing an arrangement of zooids in more or less concentric circles around the surface of the heads of the colonies. In some colonies the tunic color is very faint and those patches of darker color between the siphons stand out. No circular systems nor rudimentary cloaca were observed.

The tunic in the heads is soft in consistency, smooth and without incrustations. The tunic in stalks and basal mass is opaque and slightly wrinkled, encrusted by foreign particles and epibionts. The inner matrix of the tunic may contain fecal pellets and sand grains. Zooids lay vertical and parallel to each other, open on the upper surface of the heads and extend from the surface to base of the colony.

The zooids are yellowish and measuring up to 2 cm in length, the thorax corresponding to less than ¼ of the zooid length. The oral and atrial siphons have a conspicuous circular musculature, and six lobes each. The lobes are short, rounded and separated from each other. Each lobe forms a semi-sphere with the convex side towards the aperture and the concave side facing outwards. The atrial siphon is apical on the top of a wide atrial cavity. The body wall is transparent with dense longitudinal and transverse musculature in each side of the thorax. The longitudinal muscles are more than 30 narrow bands (~5 fibers in each band) in each side of the thorax and converging to four wide bands along the abdomen till the posterior end. The numerous transverse muscles on the thorax lay under the longitudinal muscles forming a mesh, but they are absent between the tentacles area and the beginning of the first row of stigmata. In the abdomen, the transverse musculature is present only as a narrow ring at the most anterior region. The oral tentacles are slender and sum at least 20, arranged in three size orders, but the exact number was not determined. The anterior row of stigmata curves anteriorly in the dorsal region and has a varying number of 19 to 26 stigmata per side, while the second and third rows have 20 to 23 stigmata in each side.

The esophagus is long and a trapezoid smooth and slightly asymmetrical stomach is at the posterior end of the abdomen. An oval posterior stomach is present and usually situated vertically at the bottom of the loop. The gastric vesicle was not detected. The pyloric gland contains approximately eight thin, sinuous or more straight pyloric tubules, starting in the posterior region of the stomach. Only 4–6 of the tubules appear in the exposed face of the intestine. The anus is bilobed and ends at the level between the second and third rows of stigmata. There is a granular material in the posterior region of the abdomen of some zooids. The gonads form a cluster inside the intestinal loop. The testis has numerous irregular follicles (>10), the sperm duct is straight, and the ovary has only one oocyte developed.

Only one embryo develops in the atrial cavity and was detected in samples from July and August ( MZUSP 550, MZUSP 551 and DZUP EUD 243). The larval trunk is ~ 1.7 mm long, yellow and has inconspicuous vesicles throughout the body wall. It has three adhesive papillae in the antero-median line, distant from each other, with short stalks. One specimen ( MZUSP 550) has larvae with three, four and five adhesive papillae. Usually there are four pairs of ectodermal ampullae that alternate with the adhesive papillae, but the sample MZUSP 551 has larvae with five pairs of ampullae. The ocellus and statocyte are in a posterior position. The tail wounds about ½ of the way around the larva. 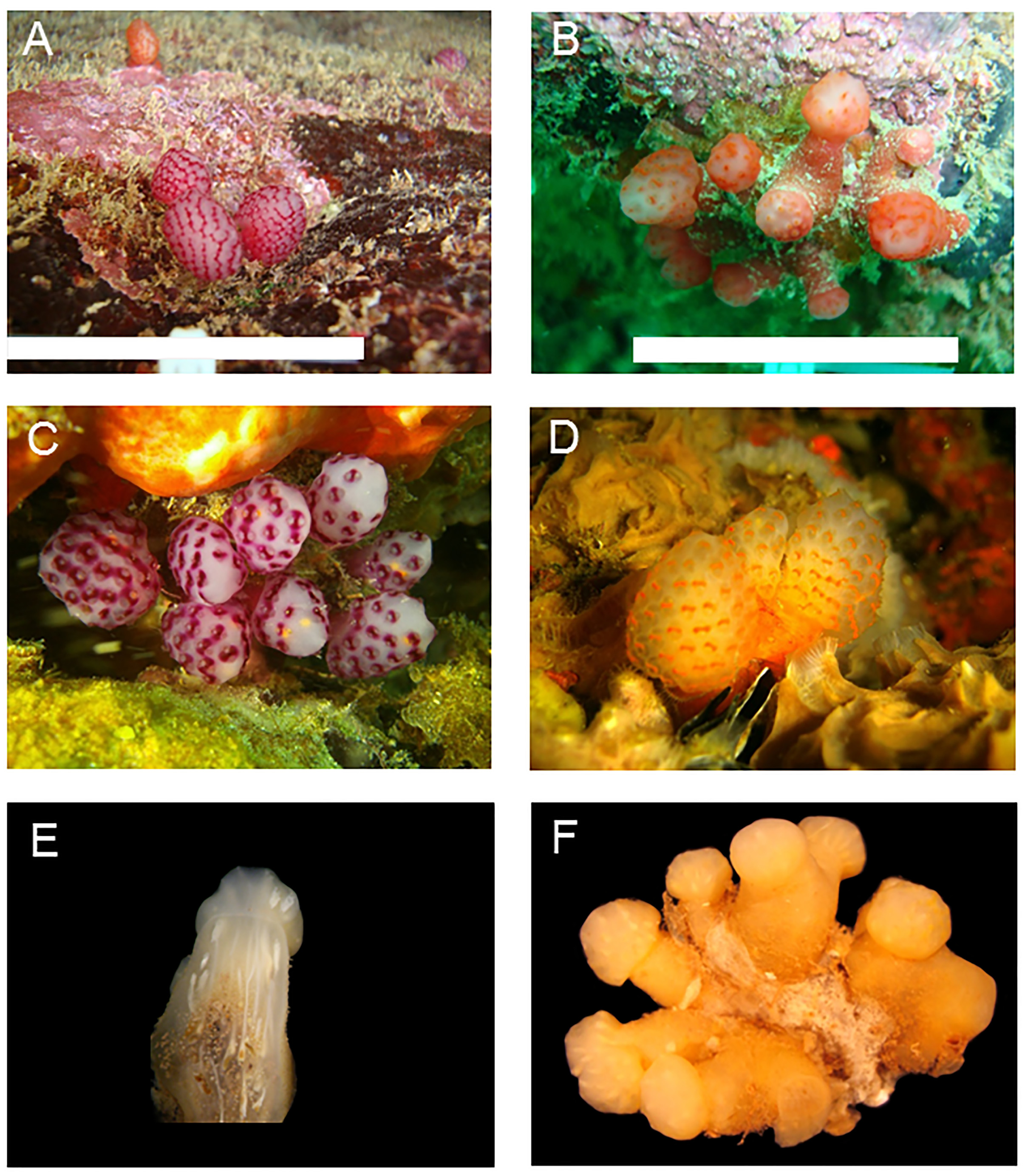 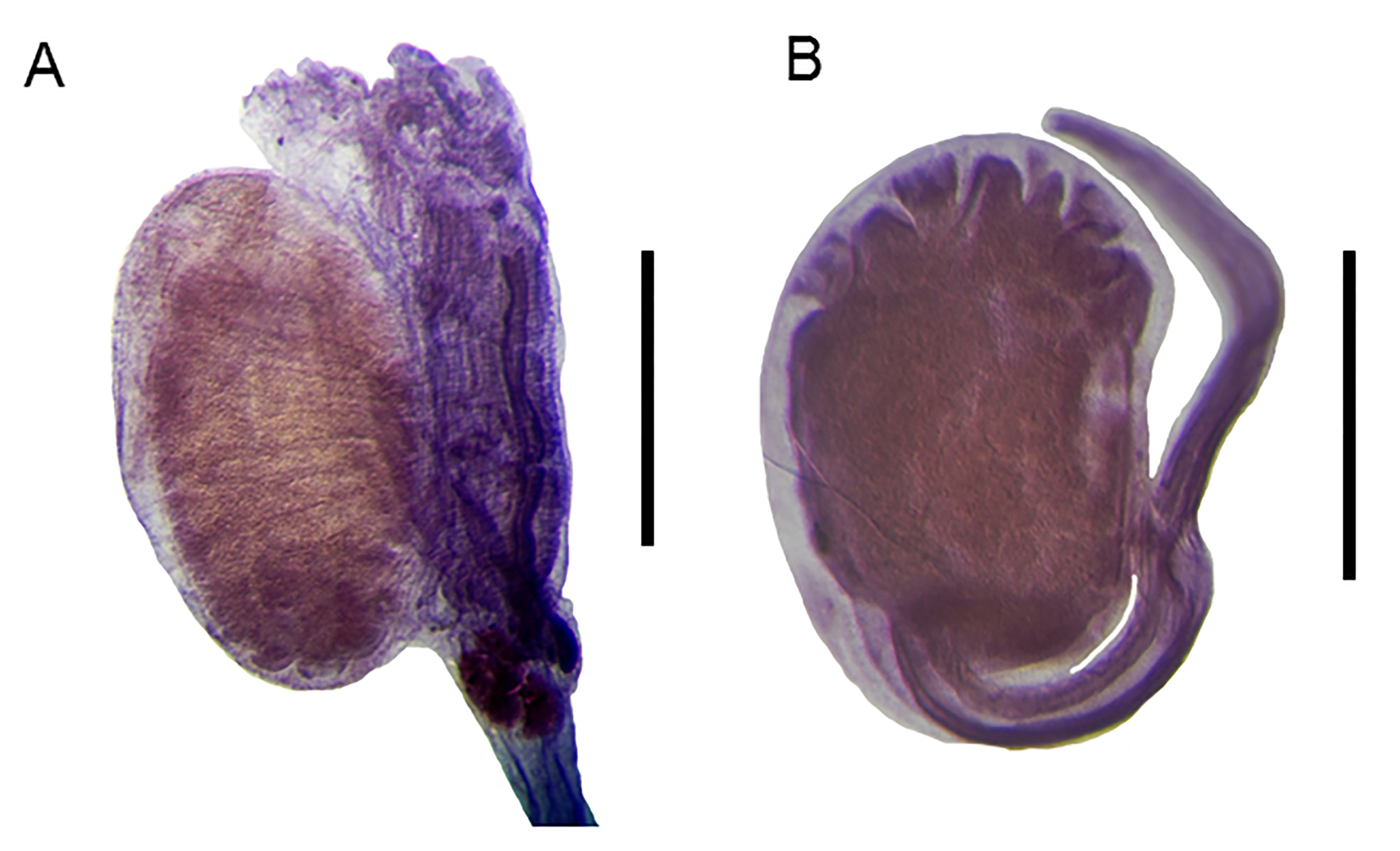