Types. Holotype (locality unknown) in MNRJ (not examined but our illustrations compared and confirmed with holotype by J.M. Costa).

Remarks. Santos (1961) described this species from one male lacking locality data, which he designated as holotype, and two females from Porto Velho, Rondônia, Brazil. His description and figures of the holotype show no central membranous area on the dorsal surface of male cercus characteristic of the males from Peru we examined ( Fig. 17 View FIGURE 17 a). Unfortunately the holotype is incomplete and only its wings and hind legs remain (J.M. Costa pers. comm.). J.M. Costa kindly illustrated a pair of its wings for us, which had not been figured by Santos (1961). Her drawing (J.M. Costa in litt.) shows Fw Pt as less markedly convex along posterior margin than in the male we illustrated ( Fig. 10 View FIGURE 10 a), and Hw Pt rectangular, with costal and posterior sides slightly longer than basal and distal sides, rather than rhomboidal, with costal and posterior sides slightly shorter than basal and distal sides, as in our illustration ( Fig. 10 View FIGURE 10 a). The remainder of Santos’ (1961) description and illustrations of the holotype fully agree with males we ascribe to this species, and we consider them conspecific.

The females described by Santos (1961) as M. acuminata (allotype and paratype) are still in the MNRJ and not in the UMMZ as stated in the description (J.M. Costa pers. comm.). J.M. Costa sent us illustrations of one pair of wings, posterior lobe of pronotum, and S 8-10 of female allotype (J.M. Costa in litt.). According to her drawings, pterostigmata are unmodified and rectangular and ovipositor is short, not surpassing tip of cerci.

The posterior lobe of the pronotum has lateral processes similar to those of males of M. acuminata , but the posterior margin between the lateral processes is bilobate lacking a medial lobe, rather than trilobate with a medial lobe as in the holotype and in our males ( Fig. 4 a). We believe these females are not conspecific with the holotype male, and belong instead to an undescribed species (M. sp. in the key). We have females collected at the same locality as males we ascribe to M. acuminata , and they lack the long lateral prothoracic processes mentioned by Santos (1961). They have instead a smooth pronotum with slightly trilobate posterior margin ( Fig. 5 a), similar to the trilobate margin of male ( Fig. 4 a). They also differ by their ovipositor, which is longer (surpassing tip of cerci; Fig. 16 View FIGURE 16 a) compared to the illustrations by Santos (1961, fig. 12) and J.M. Costa (in. litt.). We believe we have correctly associated the female sex of M. acuminata since it shares the characteristic modified pterostigma of male (unique for this species within Mesoleptobasis ), although the modification is less pronounced than in male. The identity of the two females described by Santos (1961) as M. acuminata will remain uncertain until more of these females are found in association with males. 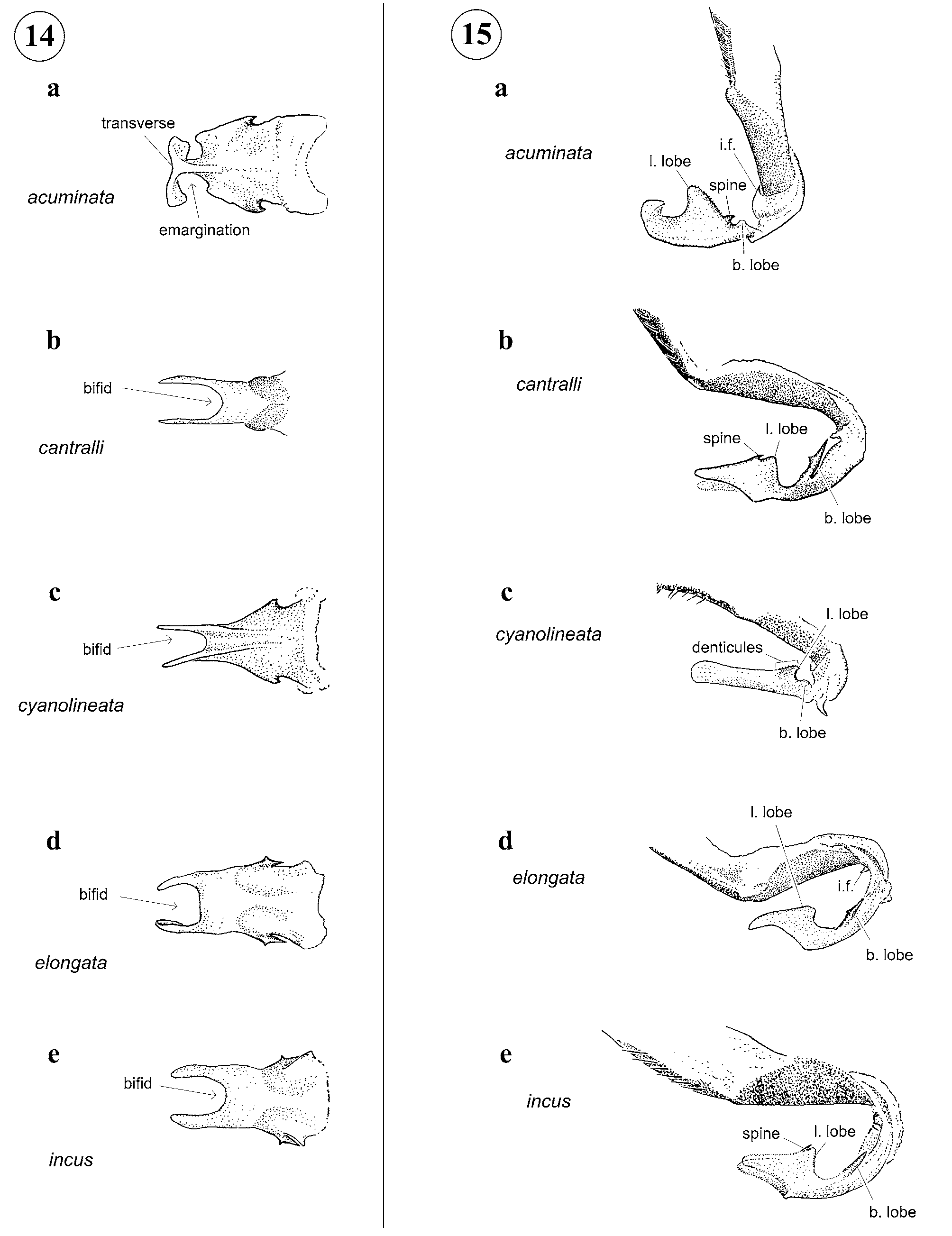 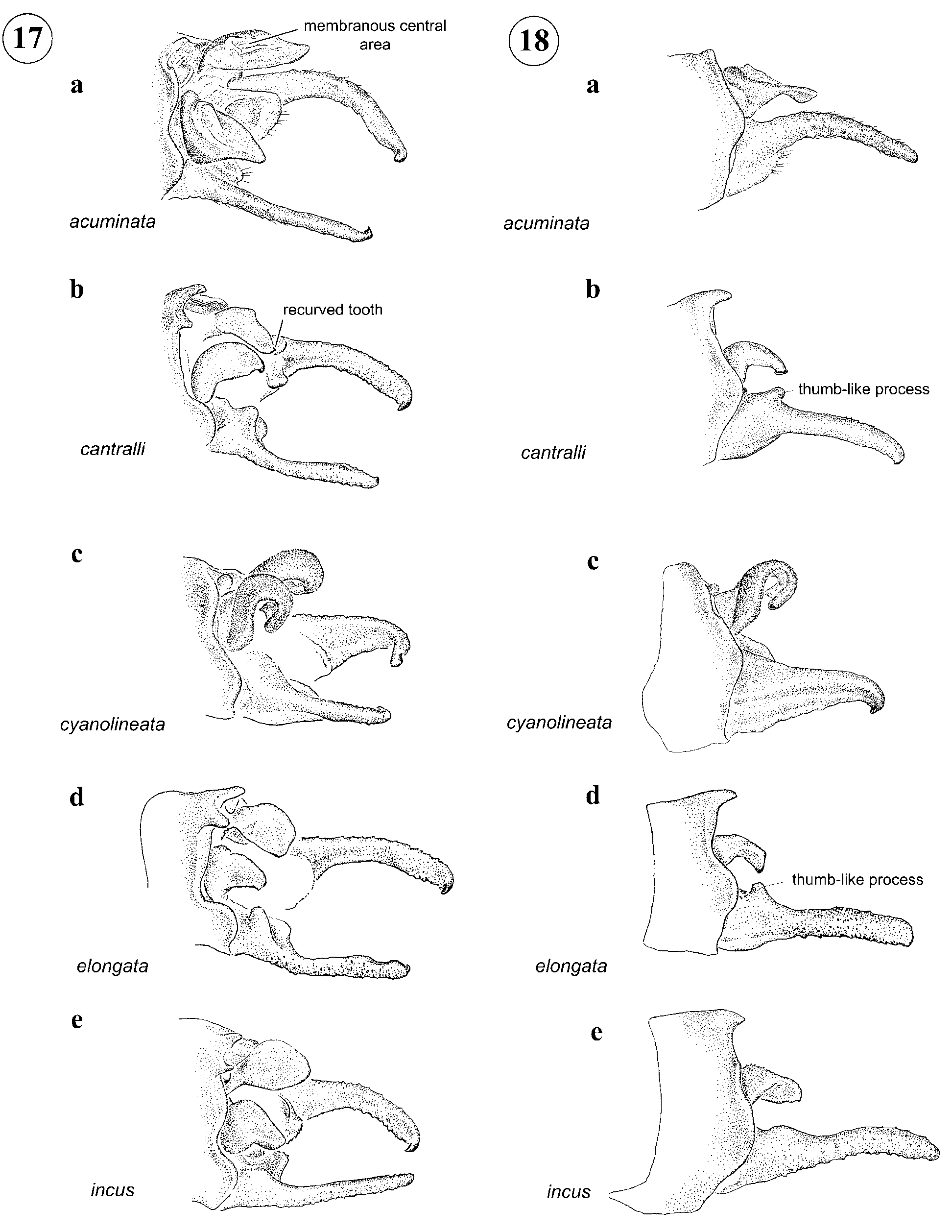