Tarsus of legs 1–19 not divided in tarsus 1 and 2. Pretarsal accessory spines rudimentary, practically not recognizable at x87.5.

Variability. Spm 2 and 3 accord well to this description, however both of them have clypeal setose plates much less recognizable and sternal transverse suture less differing from median one. We suppose these conditions to be the juvenile ones as the juveniles of С. anomalans Newport, 1844 have these characters also less developed than the adult specimens.

Remarks. Studied exemplars demonstrate unique key-character of C. nepalensis  —strongly sclerotised sternal transverse suture ( Fig. 47View FIGURE 46 – 47) (which is considerably shorter than sternal transverse thickening in subgenus Trigonocryptops  ). However, as a geographical gap between Nepal (the only known area of C. nepalensis  ) and New Guinea is considerable, we tried to confirm the identity of studied material to this species. Lewis (2011) has reasonably divided Cryptops  s.str. in three groups of species: anomalans, hortensis  and doriae  group. As studied specimens lack sutures at tergite 1 they cannot belong to the first group. The other two groups differ from each other by the presence (in doriae  ) vs absence (in hortensis  ) of saw tooth/teeth at ultimate femur, but since ultimate legs were detached and lost this character is of no use here. However, Lewis (2011: 46) wrote: “ No members of the hortensis- group have been recorded as naturally occurring in Australasia…” (which fact is confirmed by our own data), so we consider our specimens to be closely related to C. doriae  . Our specimens generally accord to the original description of C. nepalensis  and to the paratypes (No. 7488) except for the unknown structure of ultimate legs. The presence of setose clypeal plates (which are “indistinct” in some cases, see Lewis (2005), p. 121) has been recorded for subgenus Trigonocryptops  only, however Lewis (unpubl.) discovered these plates also in Cryptops  (С.) anomalans. Some additional specimens of C. (С.) anomalans demonstrate clypeus with one small triangular (“heart-shaped” sensu Lewis (2005), see pp. 116, 121) plate which bears 4–7 setae ( Fig. 48) and is unclearly bordered by subtle sutures. Studied paratypes of C. nepalensis  have no setose clypeal plates but have legs with normally developed pretarsal accessory spines (the last character is of minor taxonomic value; see also Remarks to Trigonocryptops  ).

Lewis (2013) wrote (page 19): “The species [ C. doriae  and C. nepalensis  ] are sympatric and Lewis (1999) described intermediates” and (page 21): “It may be that they are a single variable species”. We like to note that these two species are really very similar being distinguishable by only one character (strongly sclerotised sternal transverse suture), which is quite subjective and is present (at least) in another representative of the nominal subgenus— С. (C.) anomalans (Fig. 49). Lewis (1999, 2013) recorded another difference—mono- vs bipartite structure of leg tarsus, but we consider this character as quite variable intraspecifically and in some cases depending on age, thus being of minor taxonomic value (see also Remarks to C. doriae  ).

It should be also noted, that two of three studied specimens were collected at 2700 m in which respect they resemble C. nepalensis  , which occurs the similar altitudes. 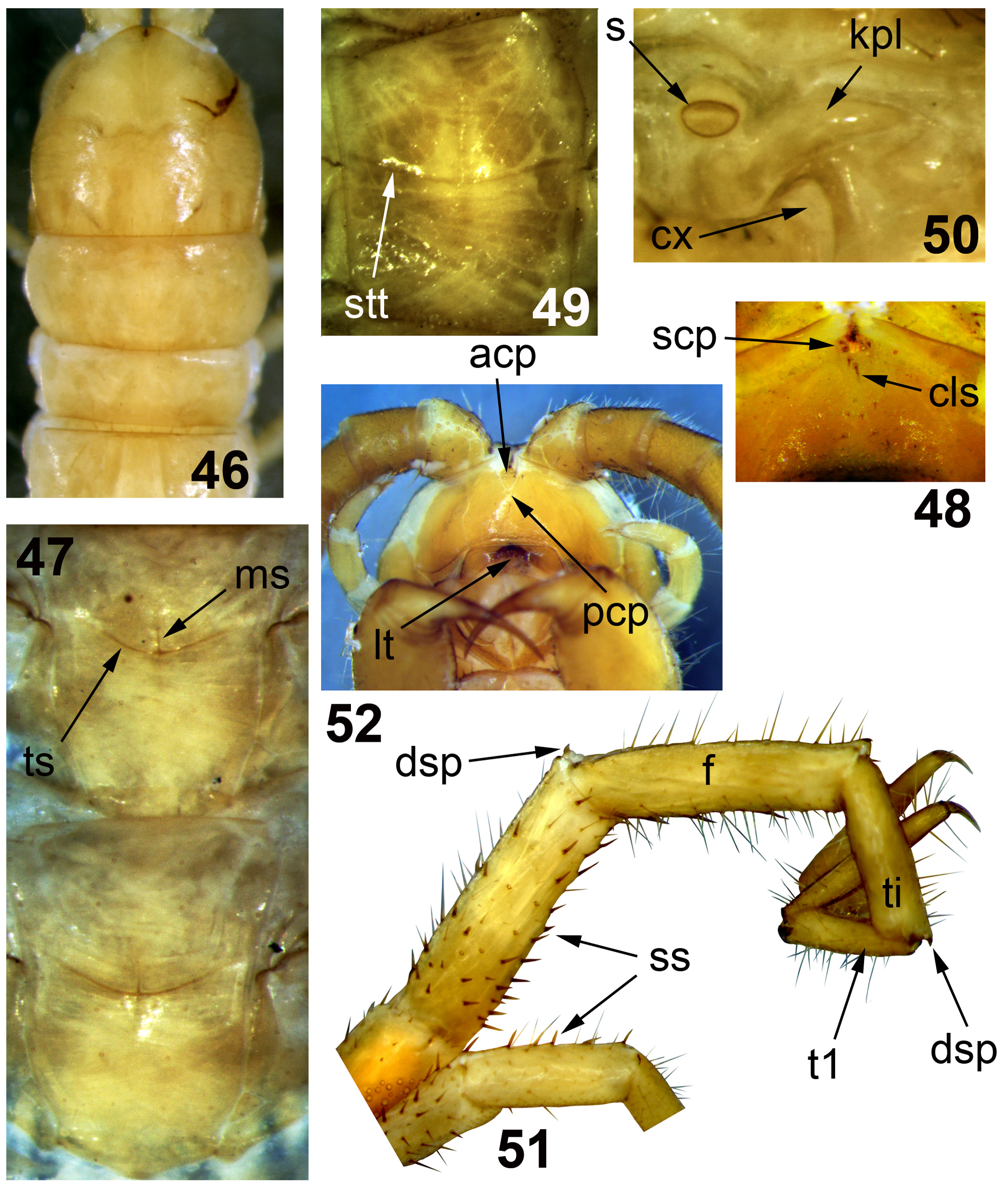