Remarks on the female of Argia bicellulata Calvert, 1909

Differential diagnosis. Argia bicellulata is the smallest known species of this genus (Garrison & von Ellenrieder 2015). Females are similar to males ( Figs. 1a‒b View FIGURE 1 ) in having the black ventral thoracic coloration, a unique trait distinguishing A. bicellulata from its sympatric congeners ( Figs. 8‒9 View FIGURES 4‒11 ). The narrow posterodistally pointed digit-like mesostigmal lobe ( Figs. 2‒3 View FIGURES 2‒3 ) differs from other sympatric species including the broadly arcuate lobe in A. botacudo Calvert, 1909 ( Figs. 12‒13 View FIGURES 12‒13 ) and broad thumb-like lobe in A. tupi ( Figs. 15‒16 View FIGURES 15‒16 ). As stated by Calvert (1909), A. bicellulata females have a coloration that resembles the male and by examining the females with living colors ( Figs. 4‒11 View FIGURES 4‒11 ), we noticed some differences from its original description. The dorsal spot on the S2, blue in Calvert’s female, is pale on the examined females of this study. On the contrary, the S9 dorsal spot was pale in Calvert’s female, and our females have it in blue. The postocular spots are smaller than in males, and its coloration is violet, instead of the blue that is found in males. A remarkable trait is the number of Fw postquadrangular cells ( Table 1), numbered three in all our specimens (a frequent occurrence to Argia species), which enforces the synonymy of Diargia Calvert, 1909 with Argia , where Diargia does not present strong enough characteristics to be considered a different genus ( Gloyd 1968). All other morphological traits on our specimens agree with Calvert’s description, such as the lack of vulvar spines on S9, hyaline wings with a reddish venation at the base, darkening distally.

Habitats and ecology. Both sexes were collected in palm swamp (i.e. veredas, Vilela et al. 2016) areas, in the same locality from where a new Argia species was recently discovered (Vilela et al. 2018). At Paciência River the palm swamp had dense vegetation and was connected to the stream although we found A. bicellulata only within palm swamp including small slow streams within the palm swamps. This species can be confused with Ischnura Charpentier, 1840 or Argentagrion Fraser, 1948 species due to its small size and flight behavior, flying through the dense grass vegetation of the swamp. 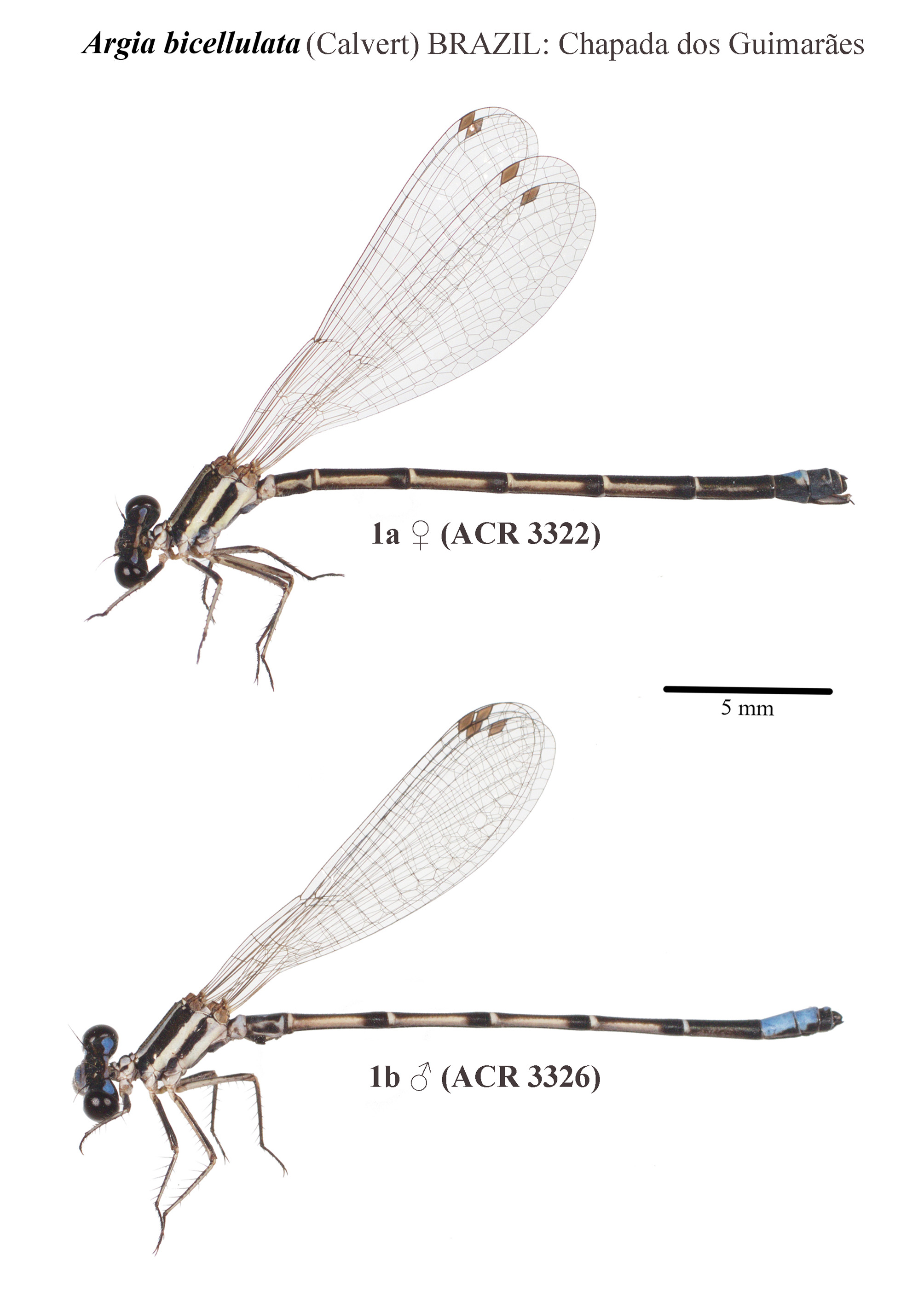