One paratype is about 8.5 mm long, the others are about 10.0 mm long. One paratype has the mesoscutal middle lobe, spot on the posterior corner of the mesoscutal lateral lobes, center of mesoscutellum, upper two-thirds of mesepisternum and mesepimeron blackish. Another paratype has similar black marks on the mesonotum, but the underthorax is completely orange.

The name is the generic name of the host plant.

Larvae feed on Saurauia montana  ( Actinidiaceae  ). First to last feeding instar larvae were found on 45 cm to ca. 3 m tall trees growing along open trails contiguous to valley or stream ( Fig. 10View Figures 9–15) (n = 10 trees, 8 cohorts/groups). Eggs are unknown, but remains of eggs (egg shells) were found. Swellings from oviposition were noticed along the primary and secondary veins of young and soft leaves near apical shoots (n = 7) ( Fig. 11View Figures 9–15). Each swelling was ca. 2.5 x 1.5 mm. By dissecting the swelling, a single egg shell (or a dead larva) was found in each. Apparent oviposition scar as old hole of ca. 0.5 mm was observed on the side of the secondary veins on underside leaf (abaxial) (n = 30). The first instar larva in the egg apparently made an exit orifice of ca. 0.5 mm on upperside leaf (adaxial) (n = 30). Early to late stage first instar were feeding gregariously, skeletonizing leaf along or near the oviposition site on abaxial ( Fig. 12View Figures 9–15). Thirty and 33 first instar larvae were counted in each single cohort (n = 2). Also under natural conditions in the field, early to middle instar larvae were intermingled and resting together (n = 1 group) ( Fig. 13View Figures 9–15). Middle to late instars were also found together resting and feeding on abaxial of relatively young leaves located at apical growth of the plant (n = 4 groups). The larvae did not feed on the secondary veins of mature, hard leaves, but readily fed on the secondary veins of relatively young leaves. Under natural and rearing conditions, last feeding instars were scattered along different leaves, found either solitary or in groups of two to four larvae (n = 30 larvae). Neither early nor late instar larvae fed on leaf buds or mature old leaves. The last feeding instar larvae molted and went under soil. Soil-covered ovoid cocoons (11-13 x 6-7 mm, n = 7) were located at the bottom surface of the dioramic aquarium. A parasitoid, an unidentified fly (n = 1) ( Diptera  : Tachinidae  ), emerged from a cocoon of W. saurauia  .

At adult stage, this species is almost identical in color to Waldheimia laeta  (Cameron) known from Central America and northern South America, but W. laeta  usually has the clypeus white, areas around the antennal insertions orange, the mesonotum entirely orange, the apical four antennomeres shorter with the 6th and 7th only about as broad as long, the sheath shorter and rounded at its apex and by the lancet. The lancet of W. laeta  ( Fig. 6View Figures 1–8) is elongate but abruptly tapering to a rounded apex and has slanted annuli.

The host plant, Saurauia montana  , is a relatively small tree 3-10 m high, leaves become up to ca. 8 by 30 cm, and distributed between Honduras and Panama. In Costa Rica, it has been recorded from 200-2600 m elevations on both Pacific and Atlantic (Caribbean) slopes, and in Monteverde area it is found commonly up to 1550 m in open habitat ( Haber et al. 2000, Missouri Botanical Garden 2018). 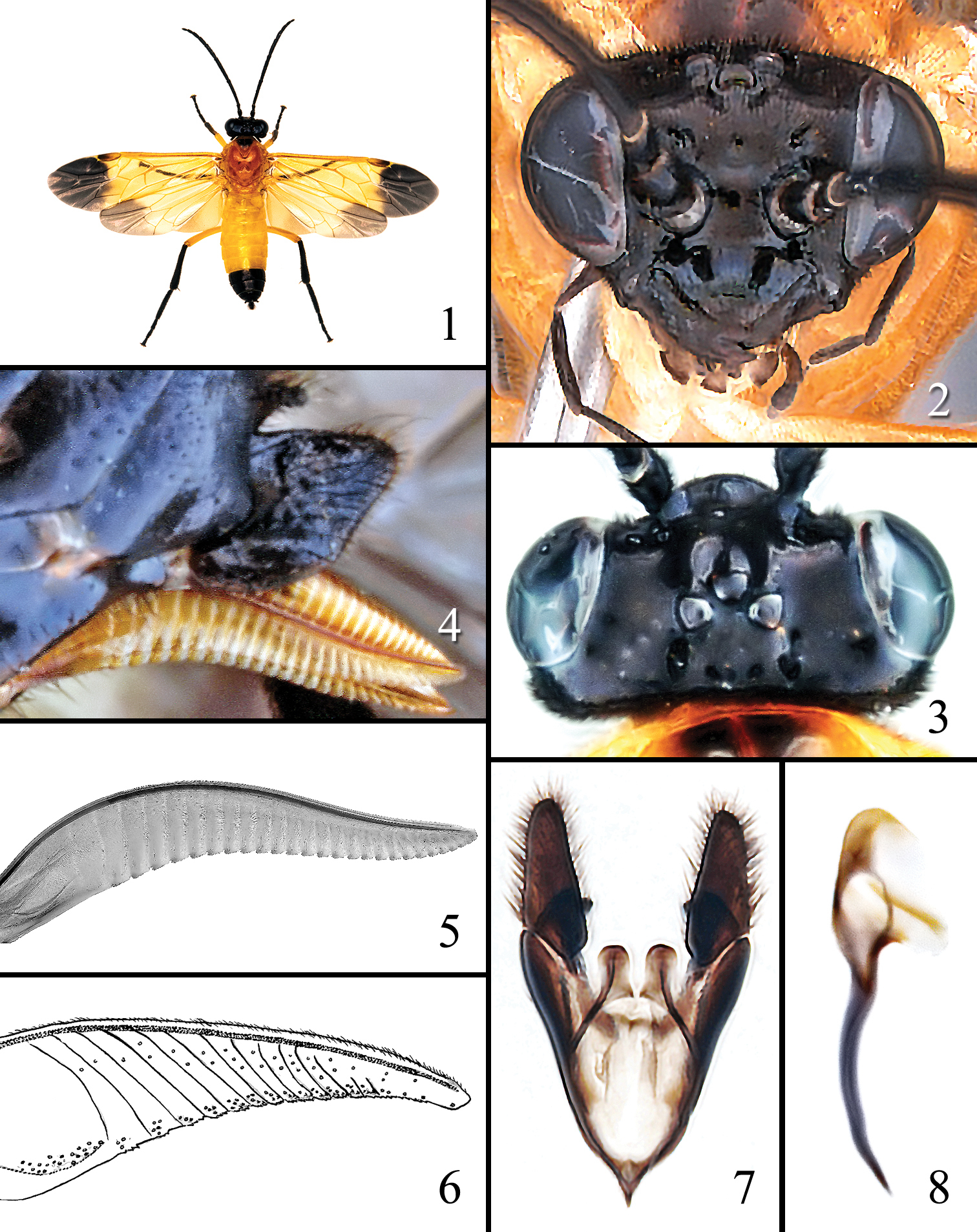 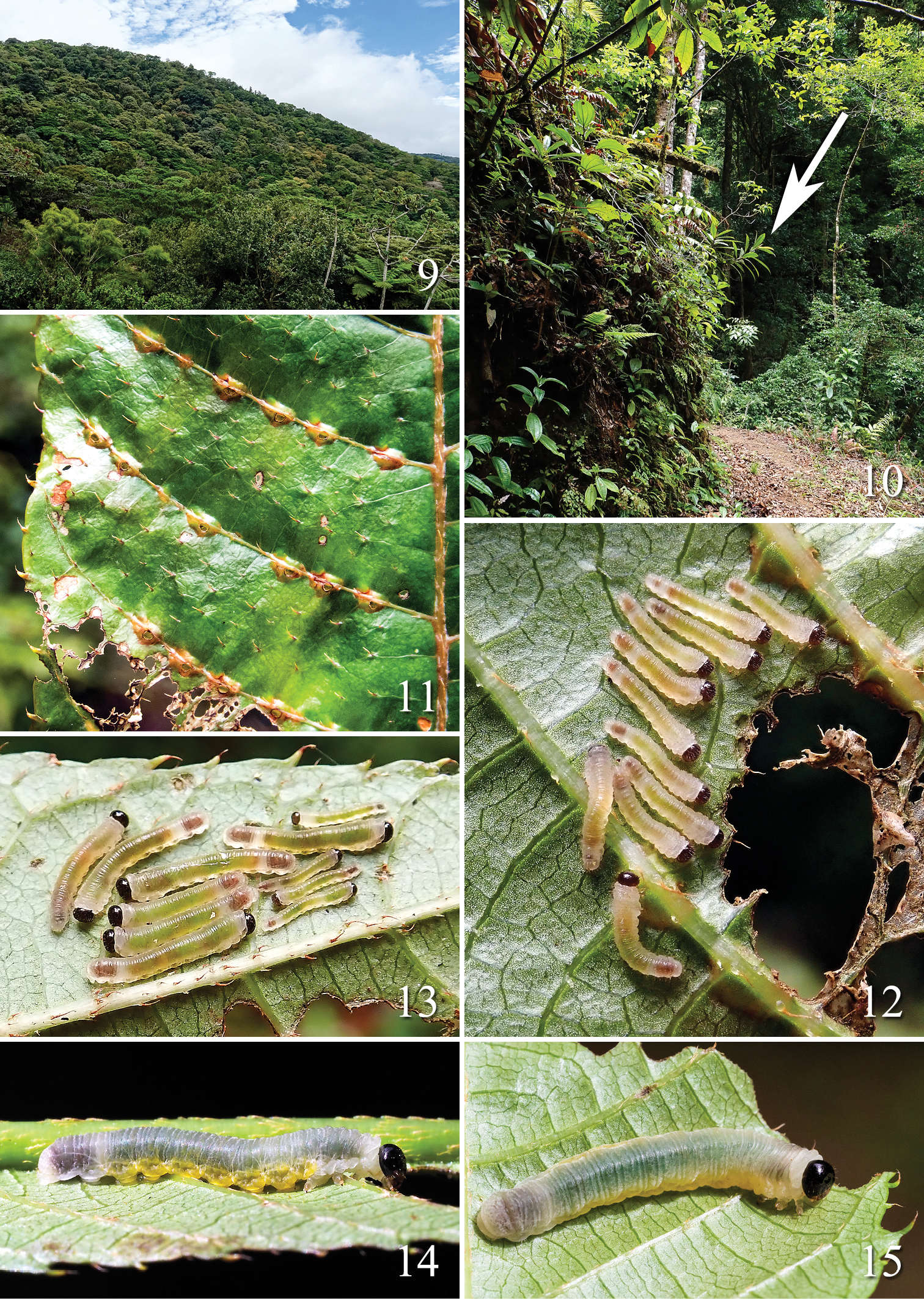