Additional material. SEM micrographs of two (out of six) colonies stored at MNHN, catalogue number MNHN _IB_2013-998, as Setosella cavernicola  , but belonging to different species, and provided by Pierre Lozouet.

Remarks. Setosella cavernicola  was introduced by Harmelin (1977) to distinguish colonies from Trémies submarine cave (near Cassis, Marseille, France) previously attributed to S. vulnerata ( Harmelin 1969)  from true colonies of this species collected at Concepcion Bank (Canary Islands). Harmelin (1977, fig. 17) distinguished the new species based on the smaller colony size, the slightly granular cryptocyst and the rounded morphology of the opesiules. These diagnostic characters can also be observed in the colony deposited at MNHN, catalogue number MNHN_IB_2008-13068 ( Fig. 8a, bView FIGURE 8), and indicated as the holotype in the MNHN web collection database (accessible at https://science.mnhn.fr/institution/mnhn/collection/ib/item/2008-13068?listIndex=2&listCount=37; accessed 19.11.2019), although Harmelin (1977) does not provide any information on the type material.

In addition, Harmelin (1977, fig. 16) illustrated a group of zooids with four opesiules, stating that the number of opesiules can double in some colonies. The two illustrations also differ in the position of the vibraculum with respect to the autozooid, placed distolaterally in fig. 16 and distally in fig. 17. Four opesiules and disto-laterally placed vibraculum characterise one of the colony ( Fig. 8c, dView FIGURE 8), out of six, deposited at the MNHN, catalogue number MNHN_IB_2013-998 (accessible at https://science.mnhn.fr/institution/mnhn/collection/ib/item/2013-998?listInde x=3&listCount=37; accessed 19.11.2019). Both the number of opesiules and position of vibracula are constant within colonies in the type series as well as in the material examined for this study. Consequently, we separate the two species: S. cavernicola Harmelin, 1977  with holotype MNHN_IB_2008-13068 ( Fig. 8a, bView FIGURE 8) and we introduce a new species, S. rossanae  n. sp. (described below), to which we attribute the colony in MNHN_IB_2013-998 figured here ( Fig. 8c, dView FIGURE 8). Zabala (1986, fig. 82A) illustrated the co-occurrence of two, four and five equidimensional opesiules in different autozooids in the same colony with inconstant vibracula always placed distolaterally to autozooids, which it is likely to be a mixture of characters observed in several different colonies as also proved for other bryozoan species (e.g. Rosso 1999).

Setosella cavernicola  autozooids are variable in size and shape.Although the size of autozooids rapidly increases in the zone of astogenetic change like in other congeners, the size of vibracula appears to be constant. Autozooidal shape seems to change remarkably in S. cavernicola  probably because it encrusts particularly uneven surfaces in cavities of concretional walls and ceilings of submarine caves. In this habitat, S. cavernicola  has been found in the inner dark recesses and in the transition zone between dark and semi-dark cave sectors ( Harmelin 1969; Rosso et al. 2019 a, 2019b), where food supply is limited. Colonies reach a relatively large size (2–3 mm in diameter) and often autozooids show evidence of multiple regenerations with intramural buds visible as series of mural/oral rims. Up to seven distal oral rims have been counted, and as many roughly concentric, mural rims of superimposed cryptocystal layers, progressively shifting distally up to the autozooid mid-line ( Fig. 11a, cView FIGURE 11). In these repeatedly regenerated autozooids, the opesia becomes smaller and irregularly shaped. Regenerations have also been observed in some ovicells and vibracula, although more rarely. Regenerations also occur following breakage of autozooids at any point along walls. All these features suggest that colonies persist for long time and are able to ‘self-repair’.

Distribution. Setosella cavernicola  is presently known mostly from submarine caves. First reported ( Harmelin 1969, 1977) from the dark recesses of the Trémies cave near Marseille (about 6 m depth), it has repeatedly been cited from the same area ( Harmelin 1986, 2000), and new colonies were more recently found in submarine caves of the eastern Mediterranean. Setosella cavernicola  is common in the Plemmirio Peninsula, Syracuse, eastern coast of Sicily, W Ionian Sea, and the Lesvos Island, NE Aegean Sea ( Rosso et al. 2019 a, 2019b, as Setosella  sp. 1), in all the caves sampled at date (three and two, respectively). However, following the introduction of S. rossanae  n. sp. (see below), the occurrence of S. cavernicola  and/or S. rossanae  n. sp. in submarine caves from the Medes Islands ( Zabala 1986), and in shallow bathyal bottoms (250–750 m depth) from the Sicily Strait ( Harmelin 1979) remains to be ascertained.

Ecology. Setosella cavernicola  is typical of submarine caves where it has been found in small cavities of organogenic concretions collected along walls and ceilings (6–40 m depth), in dark recesses and in transitional areas between semi-dark and dark sectors. Its occurrence in shallow bathyal bottoms must be checked, also in order to maintain the species within the ecological contingent of taxa typical of submarine caves and deep-water habitats (group 3 of Rosso et al. 2013b). Harmelin (2000) stated that colonies of S. cavernicola  are obligate spots, each consisting of less than 10 zooids, but several colonies in the Plemmirio and Lesvos caves are comparably large. 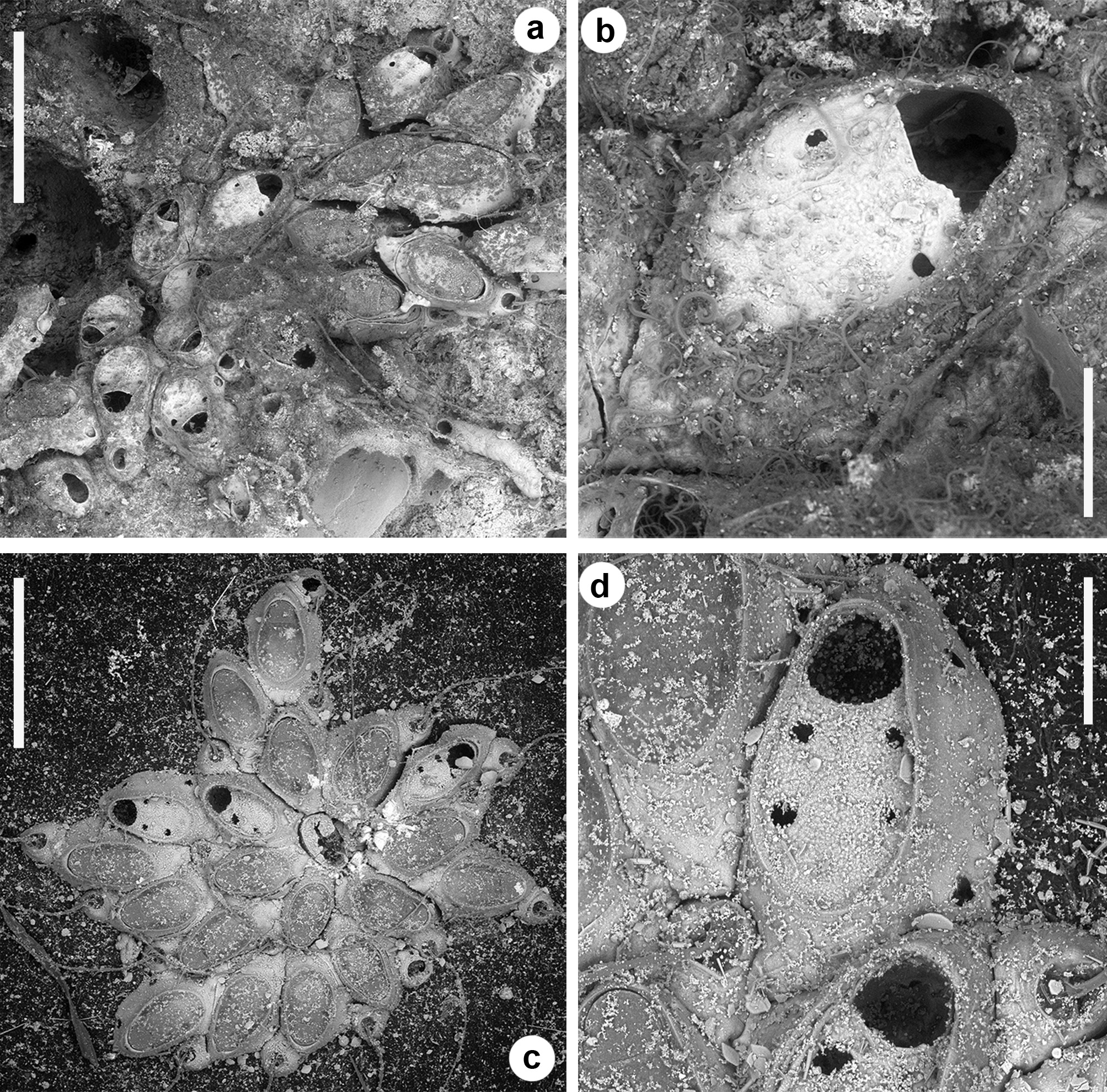 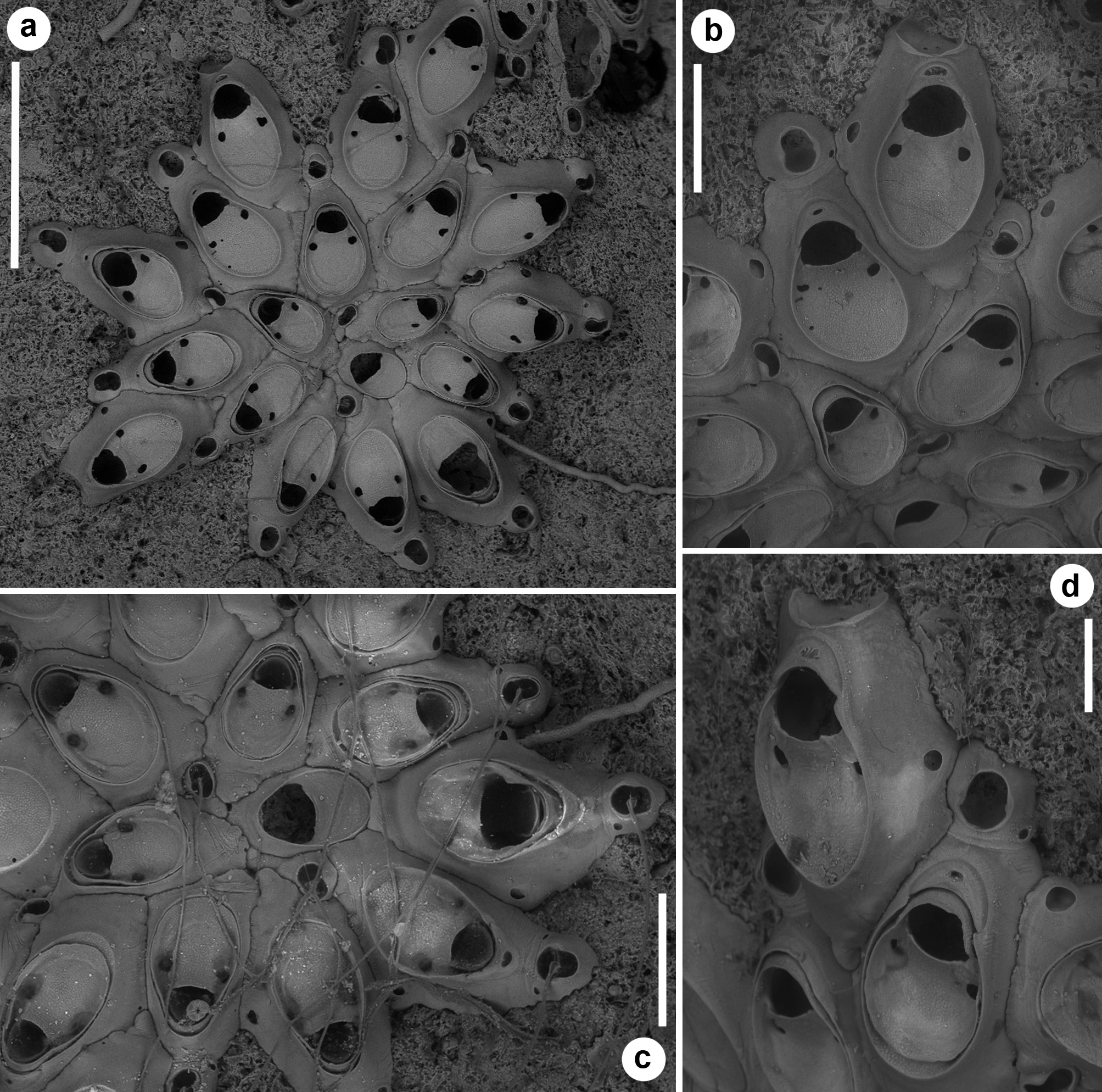 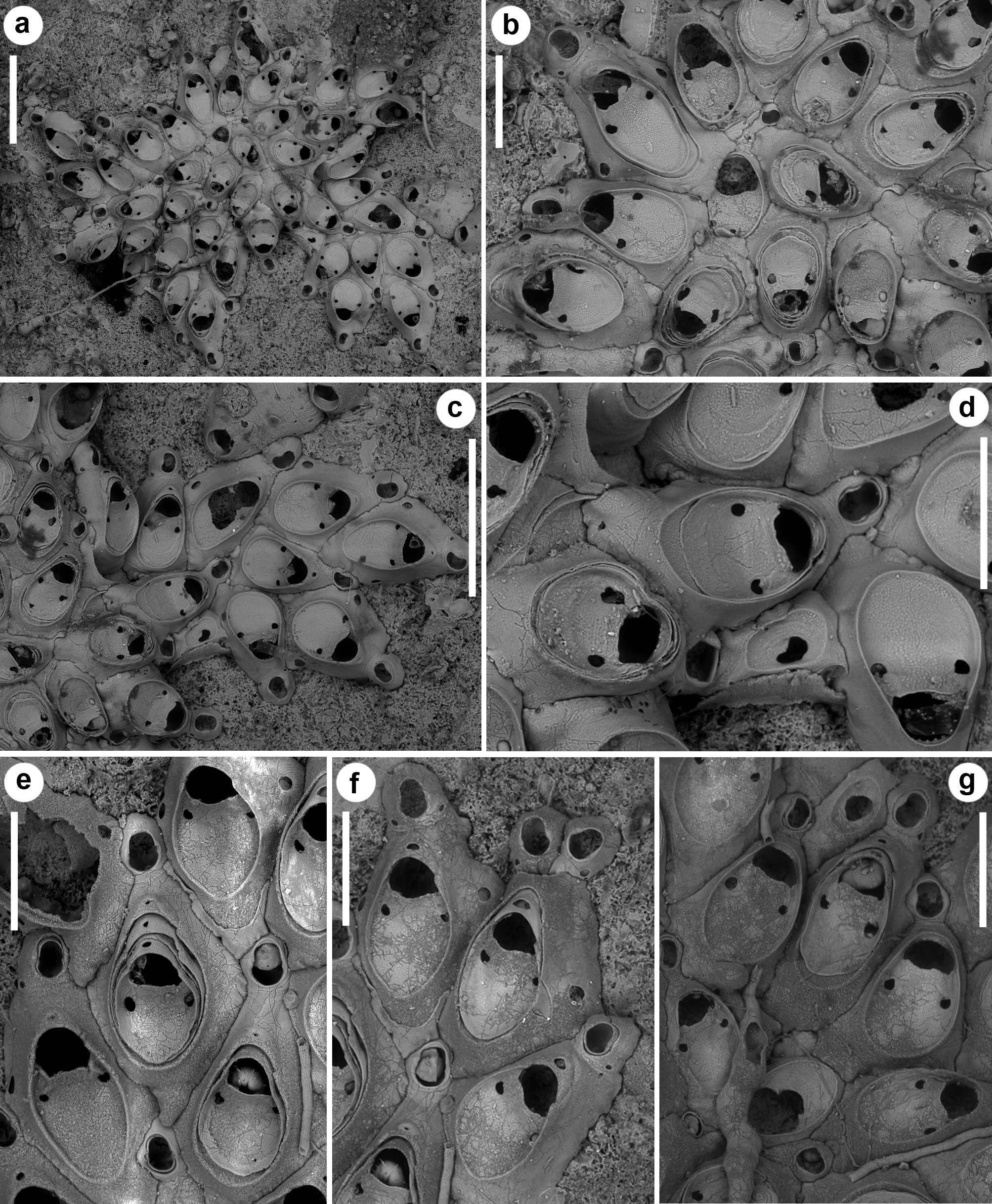 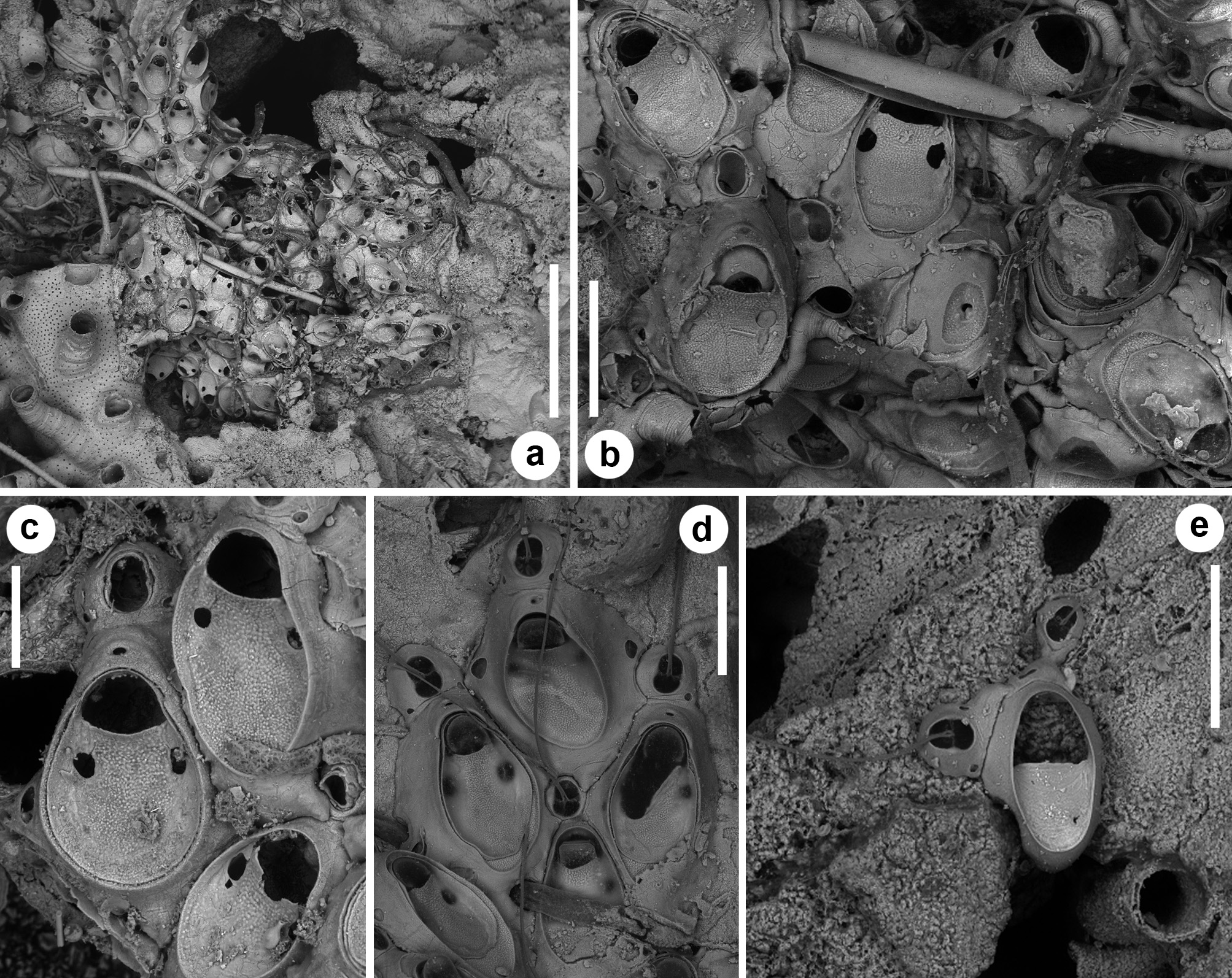 FIGURE 12. Setosella cavernicola Harmelin, 1977. PMC. B26. 30.6.2018c, Fara cave, Lesvos Island, 11–18 m depth, NE Aegean Sea, sampling station F4. a. Portion of a large, dead colony. b. Detail of an autozooid with the distal vibraculum and two large, disto-lateral opesiules. c. Cluster of autozooids with intramural budding. d. Close-up of the bottom-right colony portion in (a) Note the common regenerations in both autozooids and vibracula, some with closure plates. Scale bars: a = 500 μm; b = 100 μm; c, d = 200 μm.

FIGURE 12. Setosella cavernicola Harmelin, 1977. PMC. B26. 30.6.2018c, Fara cave, Lesvos Island, 11–18 m depth, NE Aegean Sea, sampling station F4. a. Portion of a large, dead colony. b. Detail of an autozooid with the distal vibraculum and two large, disto-lateral opesiules. c. Cluster of autozooids with intramural budding. d. Close-up of the bottom-right colony portion in (a) Note the common regenerations in both autozooids and vibracula, some with closure plates. Scale bars: a = 500 μm; b = 100 μm; c, d = 200 μm.