Etymology. The species designation “ aegyptense  ” refers to the geographical location where this new digenean was collected, i.e. off Egypt.

......continued on the next page n = Sample size. NG = Not given in original description.

1 Calculated from measurements given in the original description. 2 Entirely within posterior concavity of oral sucker.

3 Calculated from Fig. 18 of the original description.

4 Calculated from Fig. 20 of the original description.

5 Based on 8 specimens exclusive of the holotype where the terminal genitalia was clearest.

Remarks. The new species has an “ Opechona  - type ” cirrus-sac and is placed in the Lepocreadiidae  based on the reorganization of the Lepocreadioidea by Bray & Cribb (2012). In addition, the presence of a genital pore that is ventral and submedian, two testes, sponge-like lateral patches (pelops) in the anterior portion of the forebody instead of the lateral margins in the anterior portion of the body forming an incomplete scoop (i.e. not joined posteriorly), and ceca that extend close to the posterior body wall place this new species in Pelopscreadium  n. gen.; however, there are distinct differences between the new species and the type-species of the new genus, P. spongiosum  n. comb. (syn. Bianium spongiosum  ).

Pelopscreadium spongiosum  resembles P. aegyptense  n. sp. in lacking a scoop and instead possessing large, internal patches of voluminous vacuolated cells which form symmetrical, sponge-like, lateral pelops in the forebody of the worm in the region between the anterior margin of the oral sucker and about the level of the intestinal bifurcation ( Bray & Cribb 1998). Along with the sponge-like, lateral pelops both species are also somewhat similar in overall appearance, egg size (60–63 × 40–45 µm in P. spongiosum  vs 56–65 × 38–45 µm in P. aegyptense  ), sucker ratio (1: 0.73–1: 0.74 vs 1: 0.59–1: 0.94), possessing a sinistrally submedian and post-bifurcal genital pore, and both have a similar vitelline distribution ( Table 1; Bray & Cribb 1998). Pelopscreadium aegyptense  and P. spongiosum  differ in a number of features, the most striking of which is the extent and appearance of the external seminal vesicle and the distribution of the contents of the cirrus-sac. Within the cirrussac, the pars prostatica of P. spongiosum  was described as “oval, vesicular”; whereas, the pars prostatica of P. aegyptense  is more elongate with a conspicuously longer longitudinal axis (about 63 vs 89–165 µm) and it generally occupies a greater portion of the cirrus-sac (23 % vs 26–41 % of the cirrus-sac length, respectively). The external seminal vesicle of P. spongiosum  was described by Bray & Cribb (1998, figs. 18 & 20) as “saccular, reaching to about level of ovary”, and it is illustrated as a simple, moderately-wide, oblong pouch (about 150 µm long—see Table 1). However, the external seminal vesicle of P. aegyptense  is tubular, considerably more elongate and sinuous, and longer than the cirrus-sac (485–540 compared to 150 µm). Additionally, the cirrus-sac of P. aegyptense  ranges from terminating at the level of the posterior margin of the ventral sucker to surpassing the ventral sucker a relatively short distance into the hindbody; whereas, in P. spongiosum  it extends some distance into the hindbody (about half the length of the distance between the ventral sucker and the ovary). Another difference between these two species is the appearance of the testes. In P. aegyptense  the testes are consistently irregular in shape and slightly to deeply lobed, but in P. spongiosum  they are subglobular and entire (smooth) ( Bray & Cribb 1998, fig. 18). Although any differences in testicular shape (entire vs lobed) may simply reflect the potentially “plastic” nature of this morphological feature within many groups of digeneans (e.g. see Dronen et al. 2014, for a discussion of the difficulties in using testicular shape as a distinguishing taxonomic feature for species within the opecoelid genus Neolebouria Gibson, 1976  ) and on its own may not be a “strong enough character” to distinguish species, it is likely that in this particular instance, this feature may be more taxonomically (phylogenetically) informative than in some other digenean groups. We also observed that although the body lengths of P. aegyptense  and P. spongiosum  overlap ( Table 1), specimens of P. aegyptense  tend to be larger overall (1,352–1,412 × 438–489 vs 1,160–2,642 × 775–1,356 µm). The extent of the metraterm relative to body length differed between these two species (about 75 µm, or 5 % the length of the body in P. spongiosum  vs 180–335 µm or 7–16 % in P. aegyptense  ), and while both species parasitize the yellow boxfish, O. cubicus  , their geographical localities are considerably distant ( Australia vs Red Sea off Egypt). 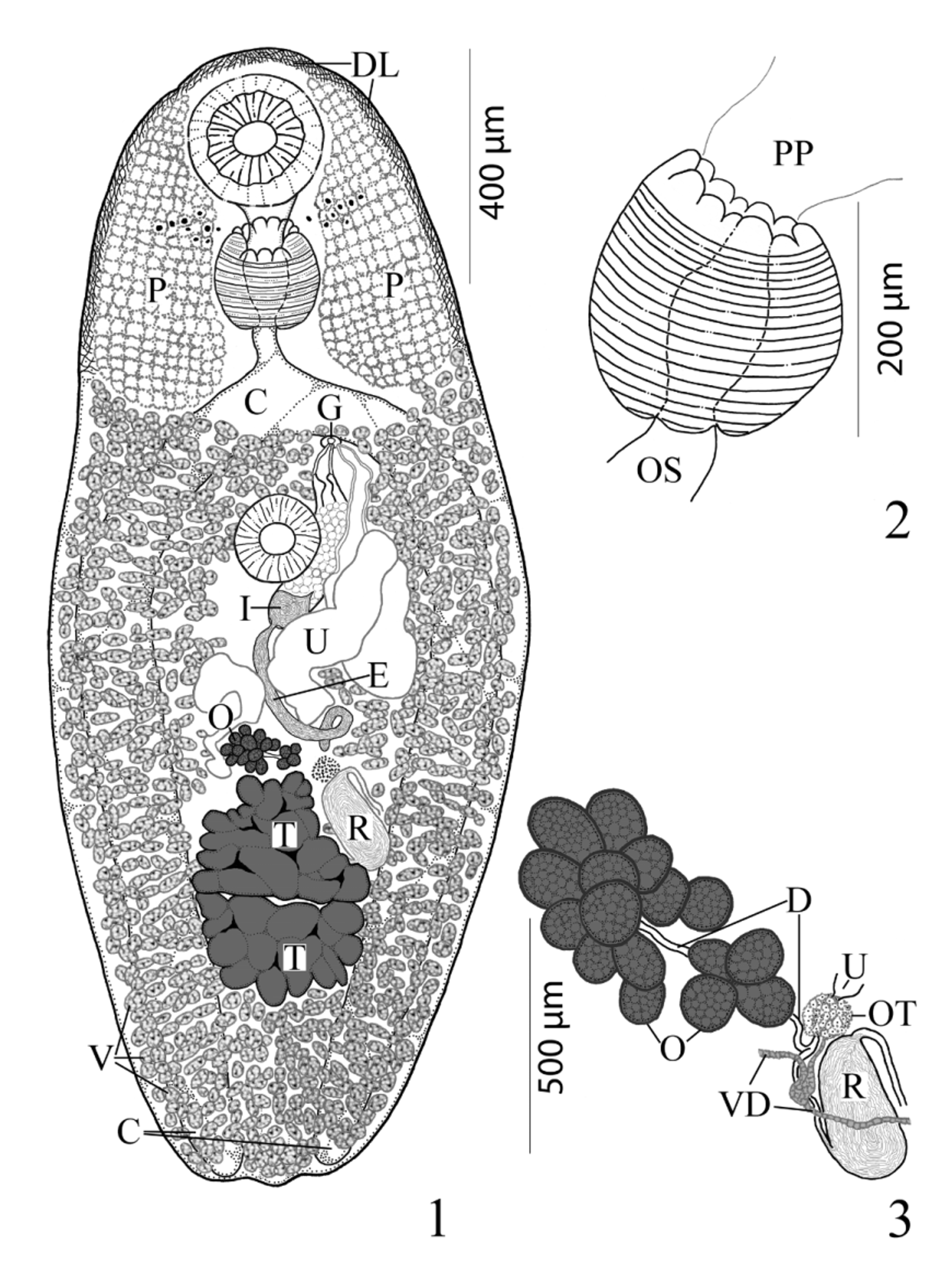