Diagnosis. Atractus collaris  is distinguished from all congeners, except for those species of the A. collaris  species group by having one (usually) or two (rarely) apical pits on dorsal scales from both sexes and supracloacal tubercles in the cloacal region of mature males (Passos et al. 2013b). Additionally, the following combination of morphological characters is unique of the species and distinguishes it from any other species of Atractus: (1) dorsal scale rows 17/17/17 with apical pits in both sexes and supracloacal tubercles in males; (2) postoculars two; (3) moderately long loreal, contacting first three supralabials; (4) temporals 1+2; (5) seven supralabials, third and fourth contacting eye; (6) seven infralabials, first three contacting chinshields; (7) five (rarely) or six maxillary teeth; (8) gular scale rows in four series; (9) preventrals usually four; (10) ventrals 167–186 in females, 145–178 in males; (11) subcaudals 18–24 in females, 22–33 in males; (12) in preservative, dorsum brown to grayish black, with cream occipital collar incomplete and small paired black spots usually cream bordered along the body, first dorsal scale rows with lighter center and brown lateral lines; (13) in preservative, venter cream except for two lines (one from each side of belly) in the lateral margins of ventral scales (paraventral region); (14) small body size, females reaching 300 mm SVL, males 218 mm; (15) moderately tail length in females (8.2–10.9.3% SVL) and males (10.9–14.5% SVL); (16) hemipenis moderately bilobed, non-capitate, and non-calyculate.

Comparisons. Atractus collaris  differs from all members of the A. collaris  species group, except A. alphonsenhogei  and A. gaigeae  , in having first supralabial contacting loreal (vs. first supralabial not contacting loreal in A. caxiuana  , A. hoogmoedi  , A. surucucu  , and A. zidoki  ). Atractus collaris  differs from A. alphonsehogei  in having descalcified alary spines and hemipenial lobes centrolineally oriented, dorsum with conspicuous spots, and yellow supralabials (vs. calcified alary spines and hemipenial lobes centrifugally oriented, dorsum uniformly dark brown or black lacking spots, and cream supralabials; from A. gaigeae  in having 167–186 ventrals in females, 146–178 in males and lacking the vertebral line (vs. 200–214 ventrals in females, 184–198 in males).

Microdermatoglyphics. Apical borders of basal portion cells 2–4 µm apart from each other; borders of denticulations slightly triangular not exceeding 1 µm high; cells surface composed by small and barely conspicuous pores; at midapical portion, spinules from cell borders longitudinally narrow with 1.5–2.0 µm height. Microdermatoglyphic pattern at this portion of the scale is, essentially, the same for the A. alphonsehogei  and A. gaigeae  ( Fig. 9AView FIGURE 9).

Remarks. Recently, Wallach et al. (2014) pointed out that the holotype of Leptocalamus  limitaneus— as well as many other types of Neotropical snakes taxa — was lost in the tragic fire accident that consumed most of the herpetological collection of the Instituto Butantan (see Kumar 2010; Warrel et al. 2010; Franco 2012). However, this and other types of Atractus remain intact and available to examination because such specimens were loaned to the senior author when the accident happened. In addition, we emphasize that other type specimens kept on the metallic cabinets survived (with some degree of damage) from the fire due to oxygen consumption inside the compacted racks (P. Passos pers. observ.). Therefore, authors of future studies must make sure to consult the curator in charge of the Instituto Butantan collection regarding the whereabouts of the types of interest for comparisons before proposing neotype designations based on the provisions of ICZN (1999). FIGURE 2. UNCOLLECTED SPECIMEN OF Atractus collaris FROM NAUTA-IqUITOS ROAD,IN LORETO,PERU,ExHIBITING A DISTINCT VERTEBRAL STRIPE (ABSENT IN OTHER SPECIMENS FROM THE REGION),DEMONSTRATING LOCAL POLYMORPHISM OF THIS FEATURE IN THE SPECIES. PHOTOS BY KONRAD MEBERT. 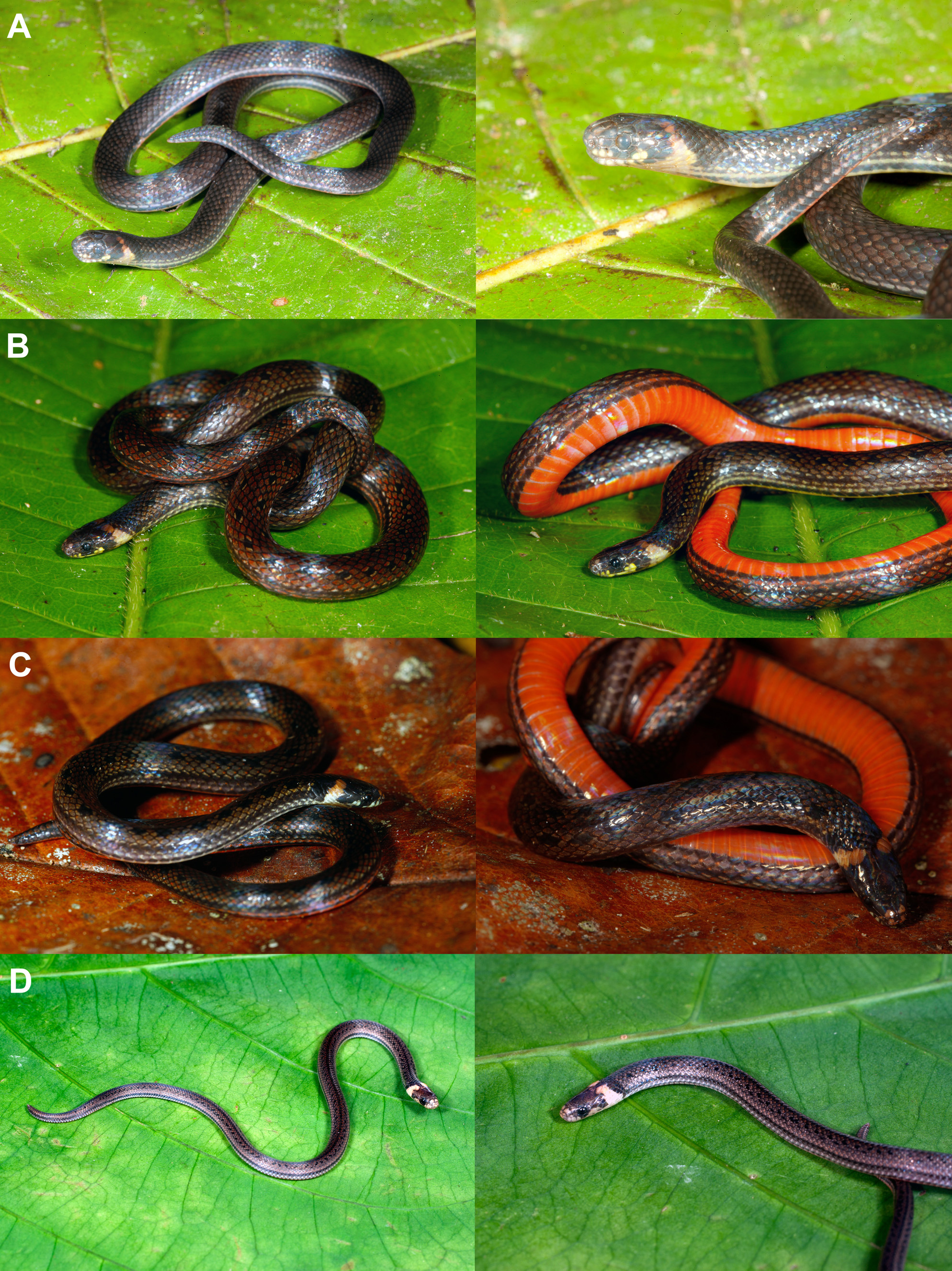 FIGURE 3. GENERAL VIEW IN LIFE OF Atractus collaris (A–B) BOTH SPECIMENS FROM MADRE SELVA, OROSA RIVER AND A THIRD INDIVIDUAL (C) FROM SANTA CRUZ, MAZAN RIVER, BOTH LOCALITIES IN THE IqUITOS REGION, DEPARTMENT OF LORETO, PERU; AND Atractus gaigeae (D, QCAZ 8339) FROM COMUNIDAD TARANGARO,CAMPO VILLANO, PROVINCE OF PASTAZA,ECUADOR.PHOTOS A–C BY MATTEW CAGE (SPECIMENS NOT PRESERVED IN SCIENTIFIC COLLECTIONS) AND PHOTO D BY DIEGO PAUCAR AND REPTILIAWEBECUADOR. FIGURE 9. MICRODERMATOGLYPHICS OF THE DORSAL SCALES OF Atractus collaris (A–B, MNRJ 24959) FROM LAGUNA GRANDE SCIENTIFIC STATION,MUNICIPALITY OF CUYABENO,SUCUMBíOS,ECUADOR;Atractus gaigeae (C–D, USNM 217623)FROM MUNICIPALITY OF MONTALVO,PROVINCE OF PASTAZA,ECUADOR;AND Atractus alphonsehogei (E–F, MPEG 10874) FROM SãO RAIMUNDO,8 KM FROM MUNICIPALITY OF SANTA INÊS, STATE OF MARANHãO, BRAZIL. EACH SCALE REGION WAS PHOTOGRAPHED FROM BASAL PORTION (LEFT SIDE) AND APICAL PORTION (RIGHT SIDE). 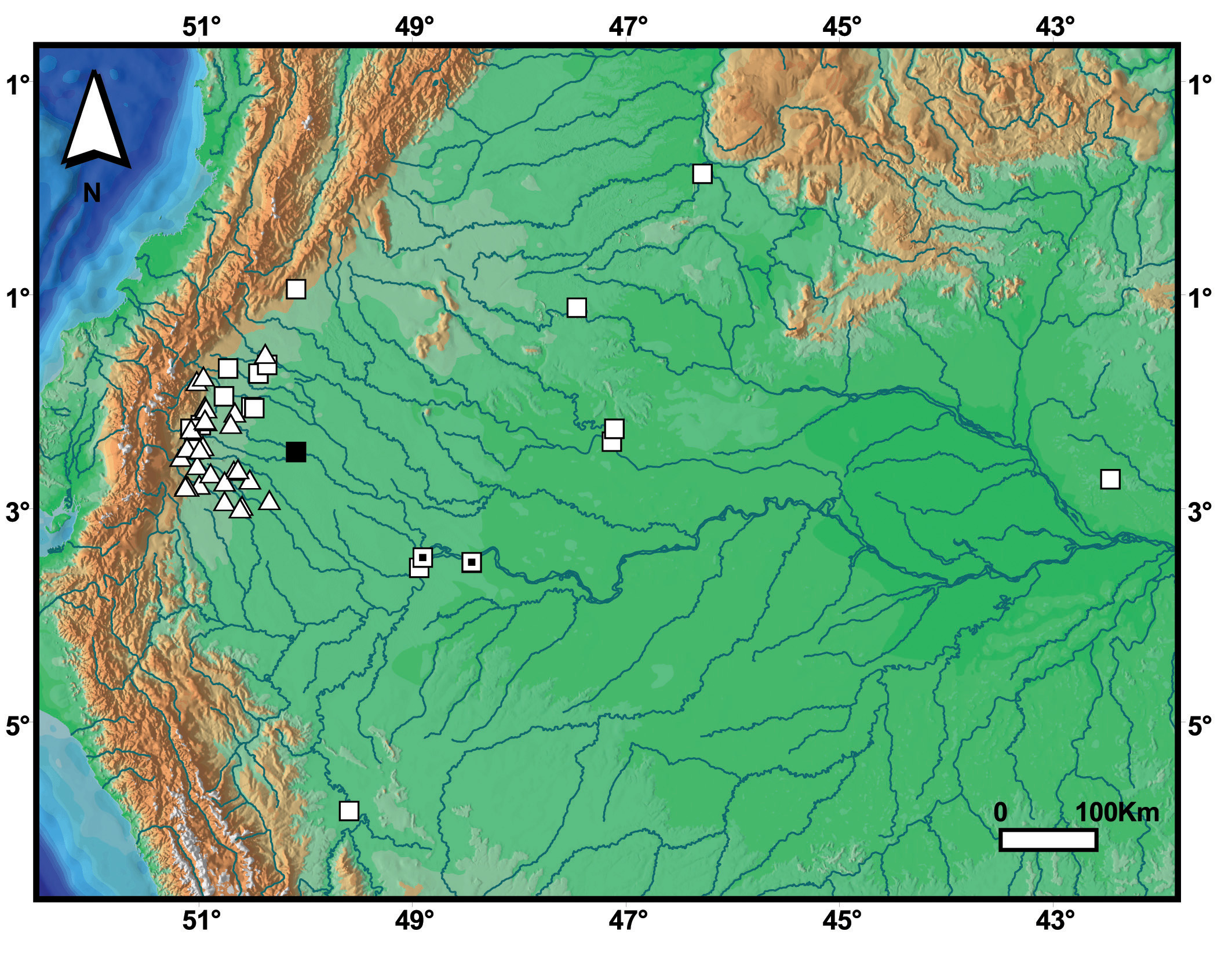 FIGURE 12. DISTRIBUTION OF Atractus collaris (SqUARES) A. gaigeae (TRIANGLES). WE USE RECORDS BASED ON THE SPECIMENS PRESERVED AT SCIENTIFIC COLLECTION AS WELL AS THE PHOTOGRAPHIC RECORDS WITH DETAILED PROVENANCE DATA (WHITE SqUARES WITH CENTRAL DOTS).THE BLACK SYMBOL SqUARE REPRESENTS THE TYPE-LOCALITY OF A.collaris. FIGURE5. DORSAL (A) AND LATERAL (B) VIEWS OF HEAD AND LATERAL VIEW OF BODY (C) OF THE Atractus collaris (MNRJ 24959) FROM LAGUNA GRANDE SCIENTIFIC STATION,MUNICIPALITY OF CUYABENO,SUCUMBíOS,ECUADOR.SCALE BAR = 5 MM. 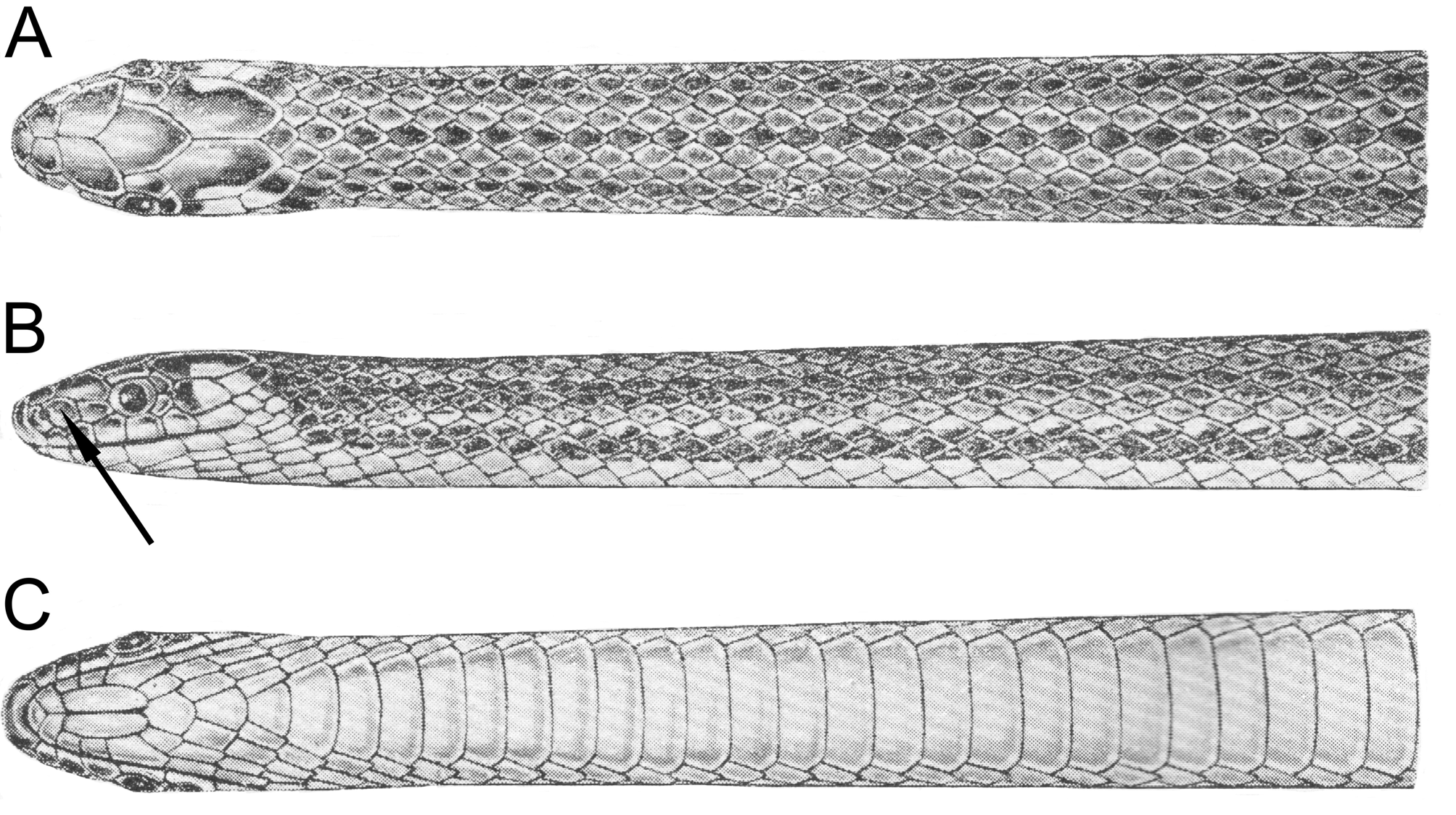 FIGURE 6. DORSAL (A), LATERAL (B) AND VENTRAL (C) VIEWS OF BODY OF THE HOLOTYPE OF Leptocalamus limitaneus (IBSP 9196) FROM LA PEDRERA,MUNICIPALITY OF PUERTO CóRDOBA, DEPARTMENT OF AMAZONAS, COLOMBIA.PICTURE MODIFIED FROM AMARAL (1935). ARROW SHOWS A DISTINCT POSTNASAL SCALE (SEE TExT FOR DETAILS).