Diagnosis. As for the genus.

Remarks. Owing to the arrangement and development of their spines, autozooids of B. balearica  display certain similarities to several species of Beania Johnston, 1840  (e.g. B. conferta MacGillivray, 1886  ; B. plurispinosa Uttley & Bullivant, 1972  ; B. quadricornuta ( Hincks, 1885)  ; B. stonycha Gordon, 1986  ), which, in contrast to Barrosia  , have more or less reticulate colonies that are loosely adherent to the substratum via rhizoids, with multiporous septula and reduced endozooidal ovicells.

We consider that Barrosia  may be included in the Calloporidae  sensu lato, which nominally comprises 75 genera ( Gordon 2010), approximately half of which are exclusively fossil, while the other half have at least one Recent species ( Bock 2009). Calloporid genera generally have encrusting colonies; their autozooids have an extensive membranous frontal wall, often obscured by marginal spines; ovicells are typically prominent and hyperstomial, sometimes with one or more ectooecial windows (tabulae); avicularia are present or absent (see e.g. Gordon 1984; Hayward & Ryland 1998; Ostrovsky et al. 2009). In overall characters including the well-developed autozooidal spines, Barrosia  most resembles calloporid genera.

Retevirgula caribbea ( Osburn, 1947)  has a similar distribution of spines (16–17) to B. balearica  insofar as the three distal pairs are long, thick, and curve upwards while the periopesial spines are more delicate and curve inwards over the frontal membrane. Retevurgula species, however, are disjunct, connected by tubules and interspersed with small oval avicularia; the ovicells are globular and generally crowned by a distal avicularium (see by Winston & Håkansson 1986).

Likewise, zooids in Corbulella corbula ( Hincks, 1880)  , as illustrated by Gordon (1986) and Bock (2008), bear a certain similarity to those in B. balearica  owing to the development of the distal spines. Again, Corbulella  is distinguished by other characters including the presence of avicularia, a well-developed gymnocyst, and a prominent ovicell with a broad proximal fenestra and thin bordering rim.

In B. balearica  , the ooecium is formed by a distal kenozooid as in other genera of Calloporidae  . In general, its structure corresponds to that illustrated by Ostrovsky (2008, fig. 2 C). Thus, the maternal autozooid produces a distal kenozooid that, in its turn, forms an ooecium. Its general structure is similar to other calloporids, i.e. a two-walled protective fold with enclosed coelom; the outer ooecial wall (ectooecium) is partially calcified, having a frontal membranous area (see Ostrovsky et al. 2009). The initial development of the ovicell in B. balearica  is similar to that seen in the first phase of development in Corbulella maderensis ( Waters, 1898)  , as shown by Harmelin (1973, fig. 1 a –d). Subsequently the external layer closes at its proximal end by means of two plates that join over the ovicell aperture, forming a tongue-like process on the proximal edge, while the larger part of the ectooecium is non-calcified; 2–3 distal spines are also formed by the same (ooecial) kenozooid, hence its structure is therefore quite different from that in Corbulella  .

The ovicell is also quite different from that in Valdemunitella Canu, 1900  , some of whose species also have well-developed spines. This genus is characterized by a medially sutured ovicell with paired frontal fenestrae.

The zooidal characters of Barrosia balearica  are rather difficult to observe using light microscopy owing the concealment of some characters by the many spines. Ideally, material should be treated in 4 % sodium hypochlorite to remove cuticular structures and the articulated spines for observation by SEM. This treatment of the limited fertile material at our disposal would have destroyed structures associated with ovicell closure and was not applied. 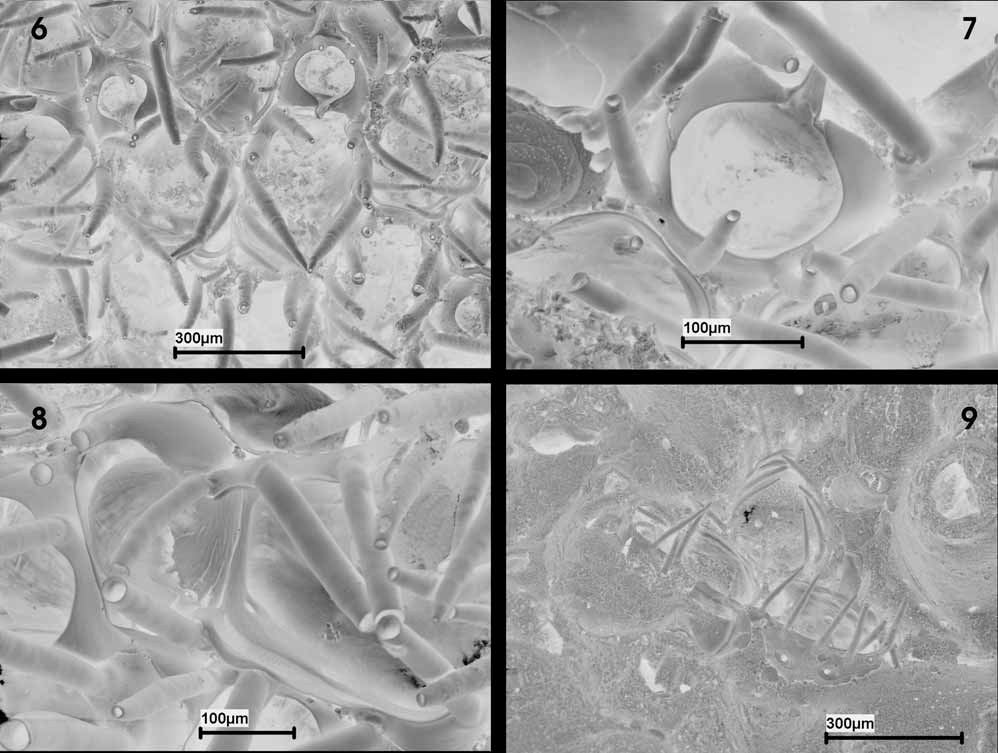