Diagnosis. Colony encrusting. Zooids with pseudostellate pores in one marginal row and about 20 in a triangular area between orifice and ascopore. Articulated oral spines present, the proximolateral pair bifurcate. Ascopore with a proximal well-developed ligula. Ovicell covered with thick, rounded nodules.

Etymology. This species is dedicated to Mr Juan Fernández Taboada, son of E.F.-P.

Remarks. No ancestrula was found in the material collected; however, in the lectotype of Cribellopora simplex Gautier  , also from the Balearic Islands (see below), we found two ancestrulae with one zooid of F. juani  ( Figs 18, 19View FIGURES 13 – 19).

Fenestrulina  is a speciose genus with 60 named taxa ( Bock 2010). The majority exhibit a relatively uniform morphology, with relatively few having extremes of variability. Fenestrulina juani  , however, exhibits a combination of distinctive features that are not widely distributed in the genus. For example, whereas many species have pseudopores that are either simple or stellate, those in F. juani  are “pseudostellate” in that they have radii that fail to joint in the centre. Bifurcate spines are also distinctive, though not uncommon in the genus, being found in species such as Fenestrulina cervicornis Hayward & Ryland, 1990  and F. d i c t y o t a Hayward & Ryland, 1990 from the Antarctic and F. disjuncta ( Hincks, 1885)  and F. littoralis Gordon, 2009  from New Zealand. A South Atlantic species attributed to F. m a l u s i i ( Audouin, 1826) by Hayward (1980) also has bifurcated proximolateral spines.

Finally, Fenestrulina malusii  , the type species of the genus, has subcleithral ovicells ( Ostrovsky 2008). In F. juani  , however, it appears that ovicells may not be closed by the operculum, unless this is an artefact of preservation (cf. Figs 15, 16View FIGURES 13 – 19).

At present, six Recent and one fossil species of Fenestrulina  are known in Europe, but there seems to be no obvious relationship between F. juani  and any of the other species. 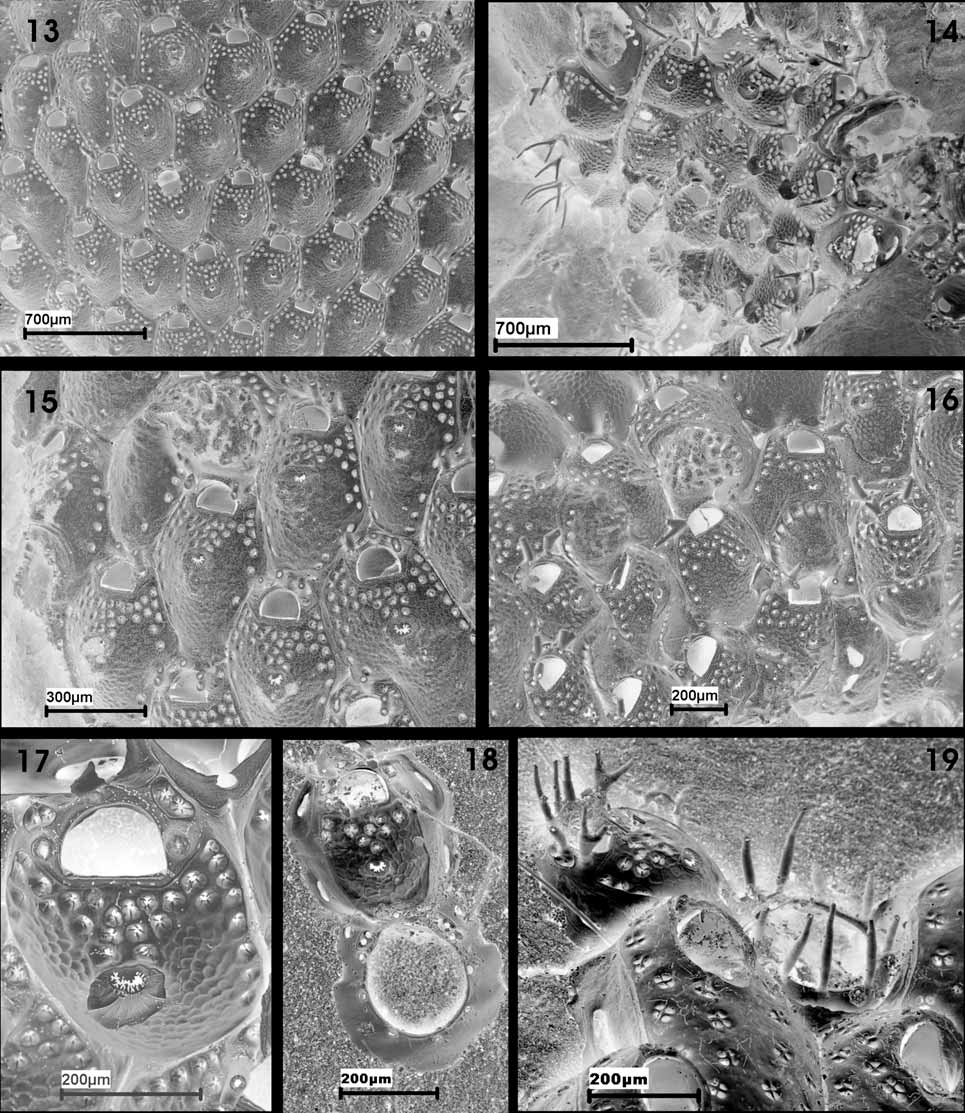