Remarks. Gautier (1957) described a new genus and new species, Cribellopora simplex  , from the Balearic Islands. Years later, the author himself ( Gautier 1962), responding to comments of Anna B. Hastings, decided that his species was a junior synonym of Schizoporella trichotoma ( Waters, 1918)  , a species from Cape Verde that became type species of the genus by subjective synonymy. Gordon (1989), however, had doubts about this synonymy owing to the distribution of the pores, the opercular sclerite and the absence of spines. Moreover, he drew attention to the absence of spines on specimens of C. trichotoma  from the Galapagos Islands and the Gulf of California figured by Hastings (1930) and by Osburn (1952), whereas spines are very apparent in the original samples of S. trichotoma  . Consequently, these two records might actually correspond to undescribed species of the genus.

We have re-examined the original colony of C. simplex  in the Muséum National d’Histoire Naturelle, Paris (MNHN- 10382) as well as material collected in the Menorca Channel, but were unable to find the material from Tunisia reported by Gautier (1962). We were able to verify that, despite Gautier ´s assertion (1957, 1962) the species does have 1–3 deciduous distal spines that are very difficult to perceive under a binocular microscope. Besides this, the ovicell is closed by the zooidal operculum as indicated by the author in his first article, whereas in his second work ( Gautier 1962) he claimed otherwise. This could be due to a simple mistake or the fact that in the second work the author was referring to the material collected in Tunisia, in which case the ovicell in C. simplex  could be subcleithral. We also found that the distribution of the pores on the frontal surface is highly variable, there being either an apparent imperforate area below the sinus as originally described ( Figs 20, 22View FIGURES 20 – 25) or nearly uniform perforation ( Fig. 23View FIGURES 20 – 25). The development of the peristome is also quite variable and seems to be more developed in the material we examined from the Menorca Channel. We have described above the ancestrula of C. simplex  , hitherto unknown.

Two colonies collected in Cabrera (Balearic Islands) and reported by Zabala (1993) as C. trichotoma  were also studied. The peristome in this material seems to be less developed, with 2–3 conspicuous distal spines, a remarkable development of the central umbo of the ovicell and lack of pores in the central area of the autozooid. Moreover, its size is significantly larger than the holotype of C. simplex  and also larger than our material. We believe that these characters can perhaps be considered within the range of variation of the species, but the figures of Zabala (1986, p. 451, fig. 151) Zabala & Maluquer (1988, p. 128, fig. 289) do not seem to correspond to the same species. Both illustrations were amended from Osburn (1952), who figured an apparently different ovicell and a greater number of zoecial pores.

On the other hand we have examined the original material of S. trichotoma  from the Waters Collection and selected a lectotype (MM- 2897) and paralectotypes (MM-2896, 2897, 3341, 3342, 9569, 10572, 10833 and 10835) ( Figs 26–29View FIGURES 26 – 29; Table 7). We can clearly confirm that this species and C. simplex  are different; among other characters S. trichotoma  has a larger orifice and a wider sinus; 3–5 (frequently 4) very stout and permanent spines; the ovicell has a vertical peak above the orifice and it is more densely perforated; ovicellate zooids have a larger orifice than non-ovicellate zooids and also have two erect lateral spines that are much more developed than in C. simplex  . Finally, the ancestrula has 13 spines whereas C. simplex  has nine. Hence, we consider it necessary to reinstate C. simplex  , which would once again become the type species of the genus Cribellopora  .

Cook (1985) pointed out that two species from the European Tertiary have similar characters to those of C. trichotoma  . She stated that Schizoporella pulchra  , described by Neviani (1895, p. 111, pl. 5 (1), figs 36, 37) appeared identical to the former species. We believe, however, that this is a different species as the ovicells are uniformly perforated; the features of the pores are not clear in the drawings, but it would appear that the pseudopore partitions are located slightly below the surface of the frontal wall (in a somewhat similar way to the situation in some species of Fenestrulina  ). Cook (1985) also observed that Cribellopora latigastra  ( David, 1949) from the Miocene of Austria and the Rhône Basin is very closely related. We were unable to examine the holotype of this species at l’Université Claude Bernard, Lyon, and can confirm that, as seen in the photo of this specimen ( David & Pouyet 1974, pl. 8, fig. 1) it can clearly be seen that the ovicell is hemispherical, smooth and bears a row of simple pores around the periphery as in Cribellopora napi Gordon, 1989  and C. siri Gordon, 1989  from New Zealand. It is therefore quite likely that C. latigastra  is indeed a different species from C. simplex  and C. trichotoma  .

The generic status of Cribellopora souleorum Dick et al., 2006  from Hawaii is debatable. Among other differences, the stellate pores (hardly perceptible in the illustrations (ibid., p. 2236, fig. 13 A –C) seem to be of the type present in many species of Fenestrulina  and quite different to those in Cribellopora  and the ovicells are acleithral and have small simple pores. Further, the ancestrula is not tatiform, as it is in both C. simplex  and C. trichotoma  .

Cribellopora simplex  appears to be endemic to the northwestern Mediterranean, where it lives in sandy, gravelly, detritic and coralligenous bottoms as well as in caves at depths of 10– 75 m. It was recorded from Mallorca by Gautier (1957, p. 1962 as C. trichotoma  ) and from Cabrera by Zabala (1993, as C. trichotoma  ). It was also collected in Ibiza, Cabrera, and l’Île du Levant (Hyères Archipelago) by Harmelin (pers. comm., February 2010). 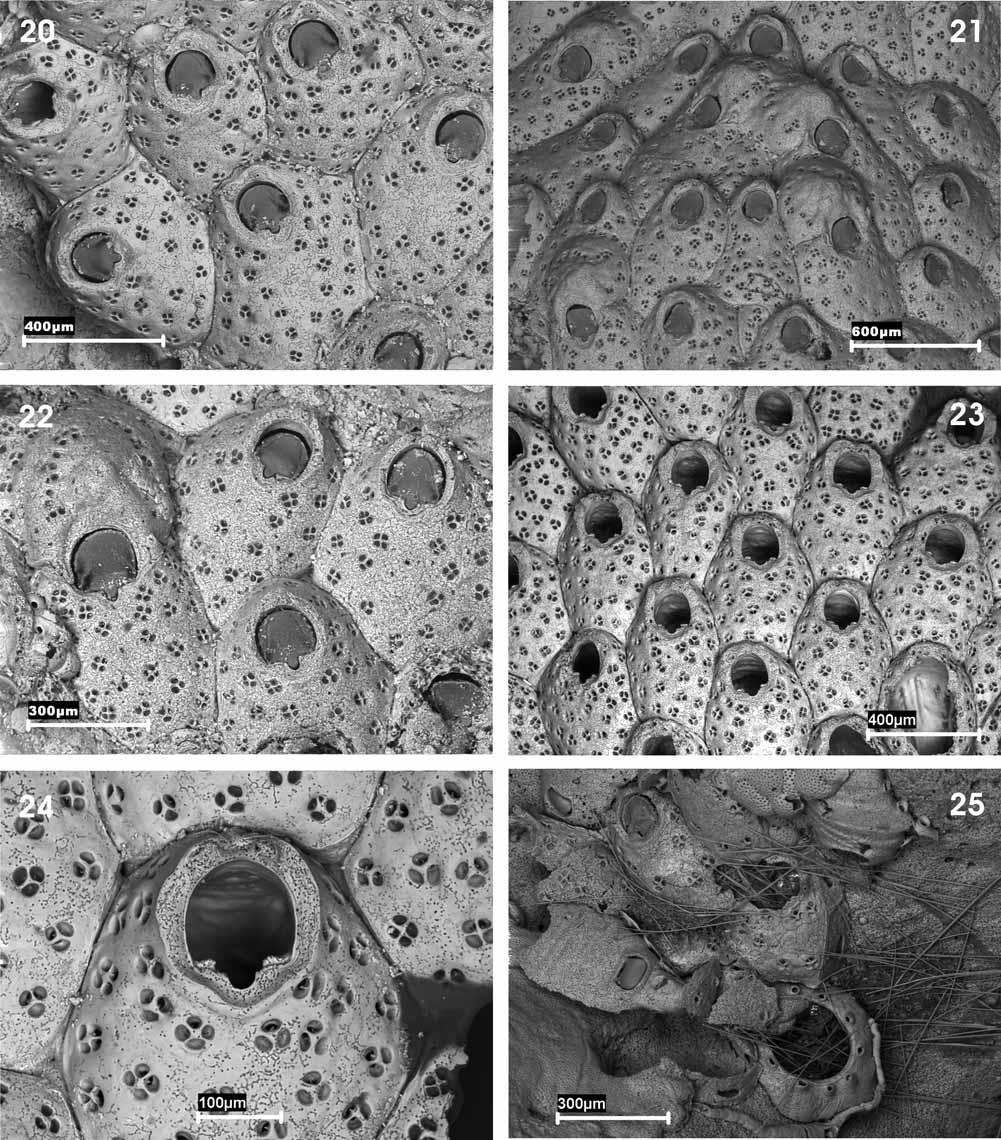 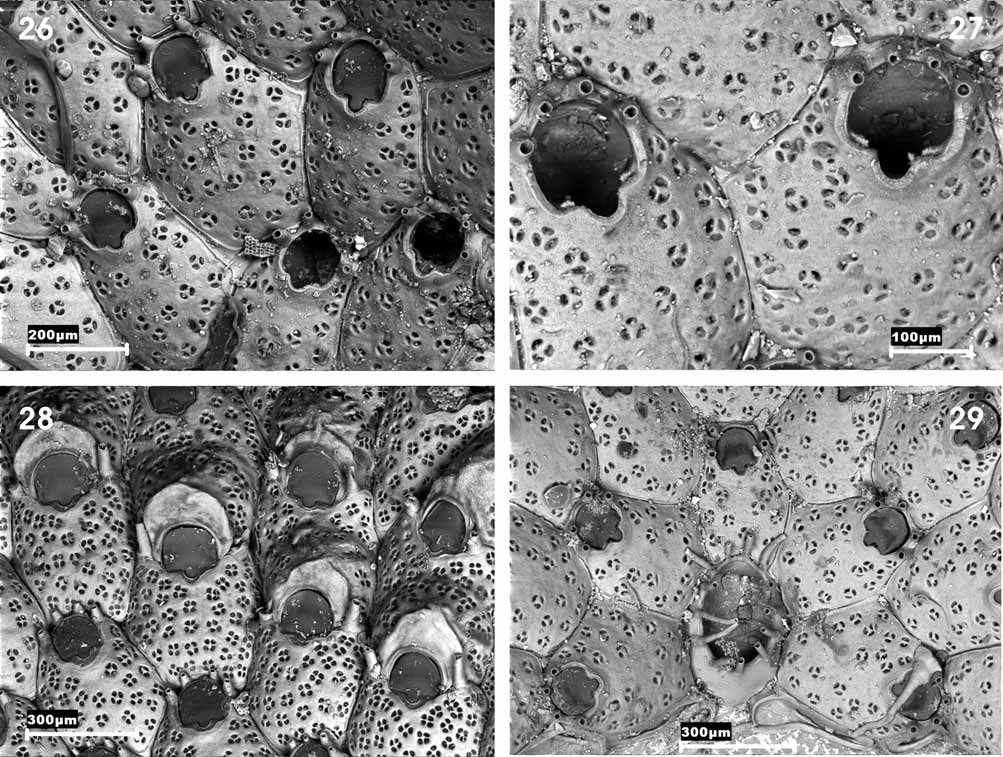