Etymology. The specific name of Monographis dongnaiensis  refers to the name of the province of Dong Nai, southern Vietnam, where this species was first collected.

Diagnosis. Monographis dongnaiensis  differs from other species of genus Monographis  by having 19–22 sensilla, with 3 anterior thick sensilla and 5 internal sensilla, which form a triangular shape on the 6 th antennal article. The surface of the labrum is smooth and asetose. Telotarsus bears a posterior process with a curved and enlarged base and is half the length of the claw. A small lateral process is present and the anterior setiform process is equal to the length of the claw.

Colouration: The body is yellowish brown in colour and darker on the latero-posterior rosette trichomes, which form 2 dark lateral bands contrasting with a light yellow medial band. Eyes are bright red with two black horizontal bands apparent in the vertex area, which distinguishes the head from the rest of the animal. The last tergite is darkest in colour and extended into the telson region. Here, the caudal bundle trichomes form light silvery bands near the base. The colour of these bands gradually fades to white and reflects light to produce a black-silver colouration towards the end of the telson. The ventral side of the body is white in colour.

Head: There are 8 ommatidia on each side: 4 located dorsally and 4 in lateral positions (1 anterior, 2 medial and 1 posterior). The vertex has 2 posterior trichome groups, a large gap is present between the 2 groups and each group is with 2 rows. The anterior, oblique row has a variable number of large trichome sockets in the centre. These trichome sockets reduce in size toward both ends. The posterior rows have fewer small trichome sockets. There is a narrow space between the anterior and posterior rows. The holotype male had 13 + 13 anterior row trichome sockets and 3 + 3 posterior row trichome sockets. The paratypes showed that variation is common in this species, regardless of sex ( QMS 98962View Materials with 11 (L: left) + 12 (R: right) and 4 (L) + 3 (R), QMS 98964View Materials 12 (L) + 14 (R) and 3 (L) + 7 (R)). Trichobothria (trichobothrium a, internal position, trichobothrium b, intermediate position and trichobothrium c, external position) are typically thin, funicular and cylindrical structures. All these trichobothria (a, b and c) are equal in size and form an isosceles triangle with equal distance between ab and bc ( Figures 3View FIGURE 3 A & E).

Clypeo-labrum: 9 setae as long as the width of the labrum are present. Setae on the paratypes range from 8–11 in both sexes. The labrum surface on the holotype is smooth, with a line of minute setae along the posterior portion and the anterior margin asetose. Some paratypes have a few setae on the labrum surface. A 1 + 1 lamellae is associated with lateral lamellae on each side of the median cleft ( Figure 3View FIGURE 3 F).

Sex organs in male: A pair of penes is present on the 2 nd coxa and 2 pairs of coxal glands located on coxal plates of 8 th – 9 th legs.

FIGURE 6. Genus Monographis  divided into 2 groups of species based on the arrangement of sensilla on the 6 th antennal article ( Huynh & Veenstra 2013); Monographis dongnaiensis  was placed in Group 2, which has sensilla forming a triangular shape. The drawings of sensilla observed on Monographis kraepelini  and M. tamoyoensis  were from Nguyen Duy-Jacquemin & Condé (1967).

M. tamoyoensis  has 18 sensilla with 5 inner sensilla ( Nguyen Duy-Jacquemin & Condé 1967) and M. queenslandicus  has the same arrangement, but with 19 sensilla ( Huynh & Veenstra 2013). M. tamoyoensis  has a conical sensillum located in the inner group of sensilla; M. queenslandicus  is observed to have a conical sensillum located in the outer group of sensilla, whereas M. dongnaiensis  is observed to have 20 sensilla with 5 inner sensilla and the absence of a conical sensillum ( Figures 8View FIGURE 8 & 9View FIGURE 9). This suggests that M. dongnaiensis  is a species that should be included in this group.

DNA analysis. A partial sequence with 1277 base pairs linear DNA was obtained from the DNA of five adult specimens of M. dongnaiensis  (Genbank accession number KP 255446View Materials (accepted 12 January 2014 )). This truncated sequence excluded the first 27 base pairs and the base pairs from 1332 onward. Based on the results of a BLAST search (http://www.ncbi.nlm.nih.gov), the partial sequences of 18 S ribosomal RNA gene from six closely-related penicillate millipedes were chosen for comparison with the sequence of M. dongnaiensis  ( KP 255446View Materials): Monographis  sp. from China (AY 596371.1), M. queenslandicus  (KF 147166.1), two species from genus Polyxenus  ( P. lagurus  (EU 368619.1) and P. fasciculatus  (AF 173235.1 )) and two millipedes are used as the outgroup ( Zoosphaerium neptunus  (FJ 409972.1) & Paradoxosomatidae  sp. (DQ 666179.1 )) in the phylogenetic analysis. The rooted consensus tree of M. dongnaiensis  was generated by the bootstrap test with 1000 repetitions which yielded a strongly supported phylogenetic tree. There were four clear clades: M. dongnaiensis  and M. queenslandicus  were a sister group, forming an independent clade. This clade branched with Monographis  sp. (AY 596371.1) forming a monophyletic group. This group of Monographis  species was separated from the two Polyxenus  species, as was the outgroup ( Figure 12View FIGURE 12). FIGURE 9. The Scanning Electron Microscopic images showed the similarity of the arrangement of sensilla between M. queenslandicus (A) and Monographis dongnaiensis (B). But M. dongnaiensis is different in lacking a conical sensillum. Small arrows indicate the inner sensilla, a large arrow indicates the position of the conical sensillum. Not to scale. 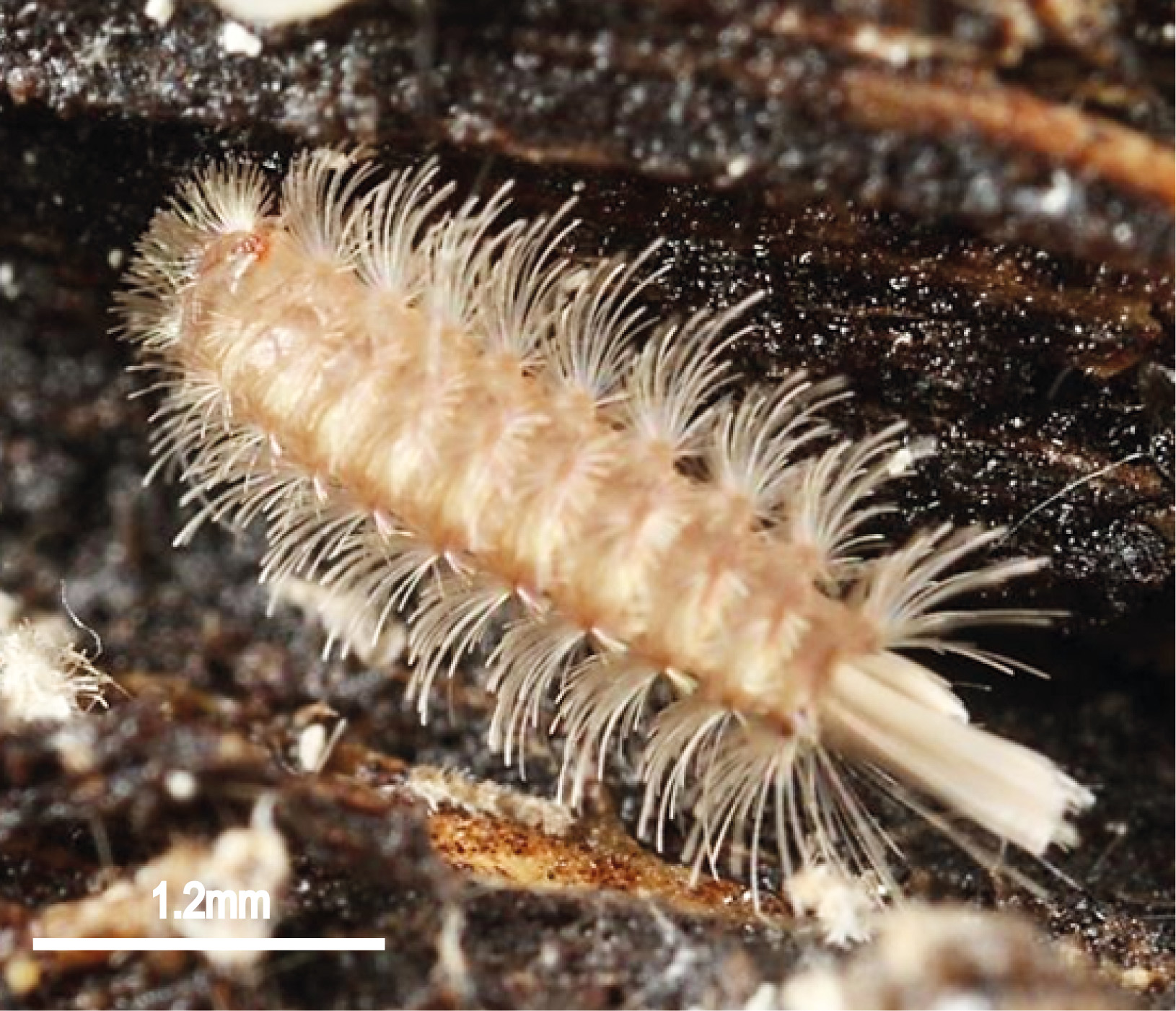