NHMUK 2015.4.21.3, ibid. One worm, six slides, serial sagittal longitudinal sections, though section plane varies due to twisting of the body. These two specimens from the Isles of Scilly were found in the course of searching for land planarians under stones, logs and other objects in a carefully tended garden (pers. comm. B. Boag).

The specific epithet, adventor, Latin for a visitor, alludes to the supposition that the species is almost certainly introduced to Europe.

A species of Marionfyfea up to about 1 cm long, circular or oval in cross-section. Dorsal and lateral surfaces irregularly patchy light and dark brown colour with small iridescent blue spots. Ventral creeping sole about 40% of the width and uniform pale brown. Eyes uniserial anteriorly, bi- to triserial for a short distance, then uniserial and sparse laterally. Pharyngeal aperture and gonopore respectively about one-third and two-thirds of the body length. Pharynx cylindrical, about 1 mm long. Five or six pairs of testes extend from the base of the pharynx to posterior of the copulatory apparatus. Expanded sperm ducts fuse anterior to the copulatory apparatus and the single common duct discharges into a crescent-shaped (in section) seminal vesicle. The base of the inverted penis collects sperm from this vesicle. The free portion of the penis is a short, blunt cylinder about 120 µm long and 80 µm wide. The distal end opens into the male antrum, which opens into the common antrum via a narrow opening. The common antrum has two adenodactyls, one dorsal and one ventral to the penis. Ovaries lateral to the pharyngeal pouch, with parovarian cells ventrally. Ovovitelline ducts fuse posterior to the copulatory apparatus and form a simple female duct.

Extended living specimens slender, about 1 cm long by 1 mm wide, tapering from narrow anterior end to greatest width about three-quarters of body length, then tapering to pointed posterior end, which is flattened, or slightly concave ventrally when worm is crawling. Rest of body circular or oval in cross-section, width about 58% of height. When contracted body is plump, about 5 mm long by 1.5 mm wide. Dorsal surface and lateral margins have irregular dark and light brown patches with seemingly random scattered iridescent light blue irregular spots ( Figure 1). Some specimens have fewer light brown patches in dorsal midline resulting in a dark brown midline. The anterior end (c. 1 mm) is uniform reddish-brown and concave ventrally with a distinct sensory margin. Creeping sole is uniform paler brown and about 40% of body width. Eyes 70–80 in total, uniserial around anterior end ( Figure 1 (c,e)), bi- or triserial for a short distance, then uniserial and sparse laterally ( Figure 2 (a)). Pigment-cup eyes are about 15 µm in diameter.

Epidermis of creeping sole lacks rhabdites and is densely ciliated. Epidermis of rest of body has many rhabdites and no cilia. Subepidermal muscle consists of thin layers of circular and longitudinal muscle fibres, combined thickness about 10 µm ventrally, about the same as thickness of ventral epidermis, and 5 µm dorsally. Parenchymal musculature consists of scattered transverse, dorsoventral and longitudinal fibres. No ring zone or sub-neural plate of parenchymal longitudinal muscle.

Pharyngeal pouch of holotype about 1000 µm long (21% of body length), 400 µm in diameter ( Figures 2 (b,c) and 3(a,b)). Pharyngeal opening is towards anterior end of pouch, about one-third of distance between root of pharynx and posterior end of pharyngeal pocket. In holotype a second duct, lined with cuboid epithelium and narrower than main pharyngeal opening, leads from pharyngeal pouch to ventral surface, just anterior and to the right of main pharyngeal opening ( Figure 3 View Figure 3 (c)). Secondary opening not detectable in other sectioned UK specimens nor in Dutch animals. Pharynx cylindrical. In type specimen it is about 900 µm long (19% of body length) by 350 µm in diameter ( Figure 3 View Figure 3 (a)). Pharynx lumen is non-ciliated. Pharynx musculature ( Figure 3 View Figure 3 (d)) consists of an inner layer (c. 20 µm) of dense circular muscle, then a looser layer (c. 100 µm) of mixed longitudinal and radial fibres, then a loose outer layer (c. 20 µm) of circular fibres underlying outer epithelium. Outer epithelium densely ciliated externally, cilia about 2.5 µm long. The pharynx opens directly (no oesophagus) into the typically triclad digestive system.

In holotype testes are mature; ventral, ovoid, about 30 µm maximum diameter, five or six follicles on either side of body. Anteriormost testis is just anterior to root of pharynx; hindmost is behind copulatory apparatus.

Just anterior to copulatory apparatus paired sperm ducts each expand to 30–40 µm in diameter and are filled with stored sperm ( Figure 4 View Figure 4 (f)). They join to form a single common duct that runs dorsally for about 160 µm, also filled with stored sperm ( Figure 4 View Figure 4 (b-e)). Duct narrows to 10–15 µm, lacks stored sperm, and opens into concave side of a seminal vesicle. Seminal vesicle is about 160 µm across and crescent-shaped in section ( Figures 2, 3(a), 4(a,b) and 6-8). Base of inverted penis projects into seminal vesicle. A narrow ejaculatory duct, about 5 µm in diameter, runs from seminal vesicle ( Figure 4 View Figure 4 (a)) through penis. Penis is about 180 µm long, but free portion of (retracted) penis is a short, blunt, cylinder at least in inverted condition, about 120 µm long. Penis musculature consists of, from outer to inner: a layer of circular muscle about 5 µm thick, longitudinal muscle about 10 µm thick and even more loose longitudinal muscle about 20 µm thick. Penis discharges into the male antrum that narrows to about 50 µm before opening into broad common antrum.

Common antrum has two adenodactyls, one just anterior, slightly to left and ventral to penis, the other posterior, slightly to right and dorsal to penis. Each adenodactyl has a proximal reservoir about 20 µm across, which leads to a muscular duct about 5 µm in diameter then broadens again to about 20 µm. Circular muscle fibres surround the reservoir, but distal end has an open structure with little muscle. This is similar to Type VI of Winsor (1998) though there is no evidence of glandular secretion in either.

Pair of ovaries lie laterally, near rear of pharyngeal pouch ( Figure 3 View Figure 3 (b)). They appear roughly spherical, about 100 µm in diameter. An oviduct arises from ventral surface of each ovary. Base of ovary and origin of oviduct surrounded by parovarian cells ( Figures 5 and 8 (b)). From each ovary an ovovitelline duct, external diameter 20 µm, internal diameter 10 µm, runs posteriorly to behind gonopore where they join forming a short common ovovitelline duct about 75 µm in diameter. Walls of separate and common ovovitelline ducts are 5–10 µm thick and consist of cuboid cells with central nuclei. Common duct opens into posterior of female genital canal, which runs anteriad for about 200 µm. Numerous long-necked shell gland cells surround posterior region of copulatory apparatus laterally, ventrally and dorsally and discharge into the first ~100 µm of female genital canal. Epithelium of duct is about 15 µm thick with necks of glands passing between. Canal then gradually broadens and opens into common antrum.

Common antrum opens to gonopore on ventral surface by a narrow gonoduct about 15 µm wide and 250 µm long.

Notes on other sectioned specimens

NHMUK 2015.4.21.2 ( Figure 6 View Figure 6 ). Measured from sections, the specimen is 2.8 mm long, mouth and gonopore, respectively, 0.95 mm and 1.85 mm from anterior end (34% and 66%). Pharynx is cylindrical, about 450 µm long (16% of body length) and 250 µm in diameter. A gonopore is present; common atrium opens into a female atrium that is about 220 µm long. Penis is partly developed, with basal seminal vesicle visible. Both adenodactyls are in early stages of development. No sperm ducts or sperm storage is visible. Some testes are visible in early stages of development. Ovaries are present, level with posterior of pharyngeal pouch. Ovovitelline ducts are traceable to common female duct.

ZMA V.Pl. 7227.1. Seminal vesicle is present. Penis is retracted and approximately 80 µm long. Both adenodactyls are developed ( Figure 8 (a)). Ovary and parovarian cells are shown in Figure 8 (b).

These are all apparently of the same species though none have been further examined.

David Fenwick found and photographed, but did not collect, a specimen in his garden, under soil contacting stones and decaying timber, at Roscadghill Parc, Heamoor, Penzance, Cornwall, UK (50.124093, −5.555791) on 23 March 2013 and 17 May 2013 ( Figure 1 (d,e)). See David Fenwick’ s website for this and other land planarian species (http://www.aphotofauna.com/worms_flatworms_platyhelminthes_nemertean.html).

Brian Eversham found a specimen about 8 mm long on 17 March 2015 at Grangelands Nature Reserve, Cadsden, Buckinghamshire (51.735935, −0.802060). It was photographed in the field (Eversham flikr site; https://www.flickr.com/photos/cladonio phile/16572338910/in/album-72157655470323580/) and collected but disintegrated before it could be preserved. A search on 6 August 2015 of the same site by the authors and others failed to find further specimens (but another terrestrial planarian, Microplana terrestris Müller, was abundant). 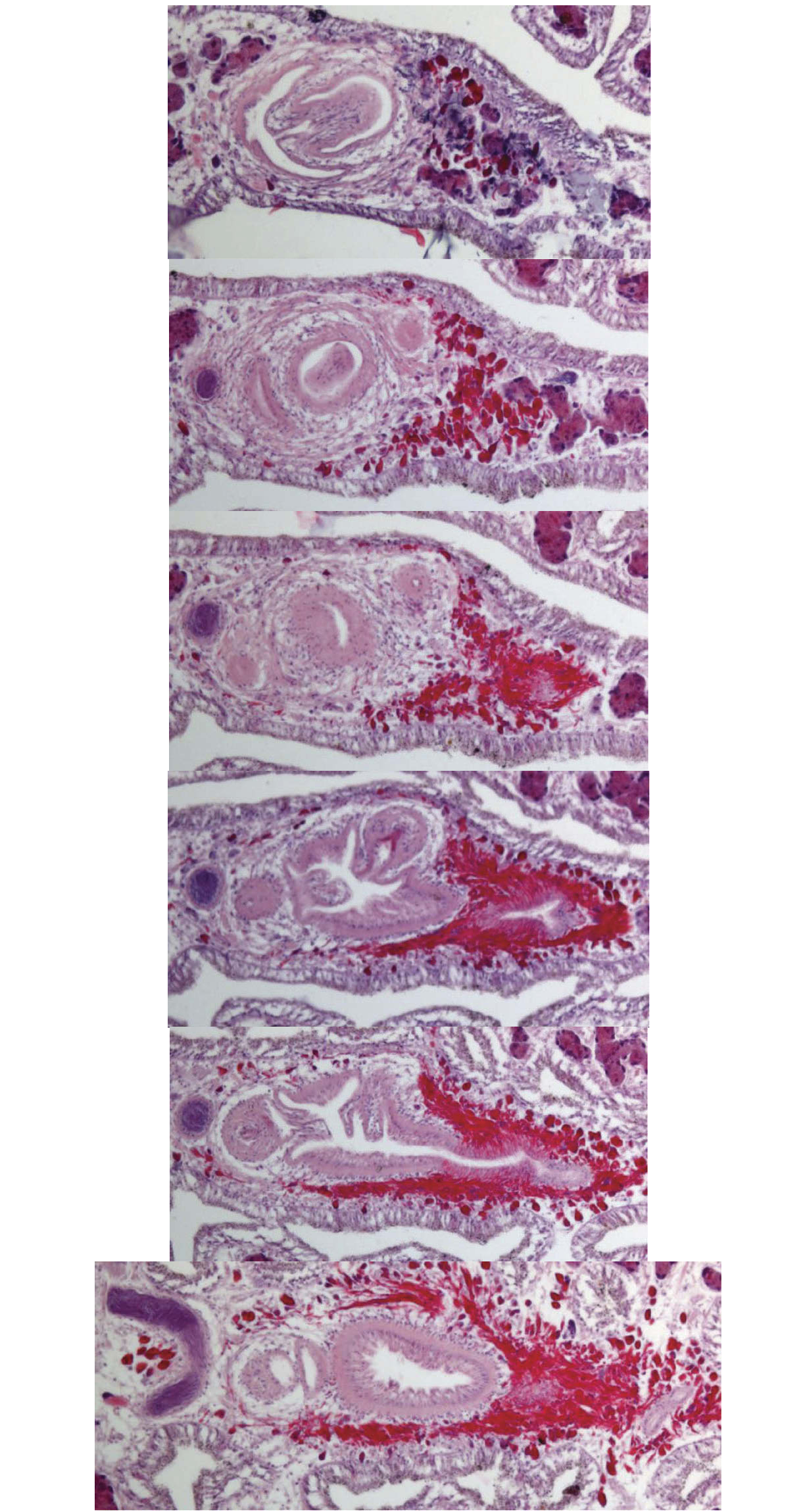 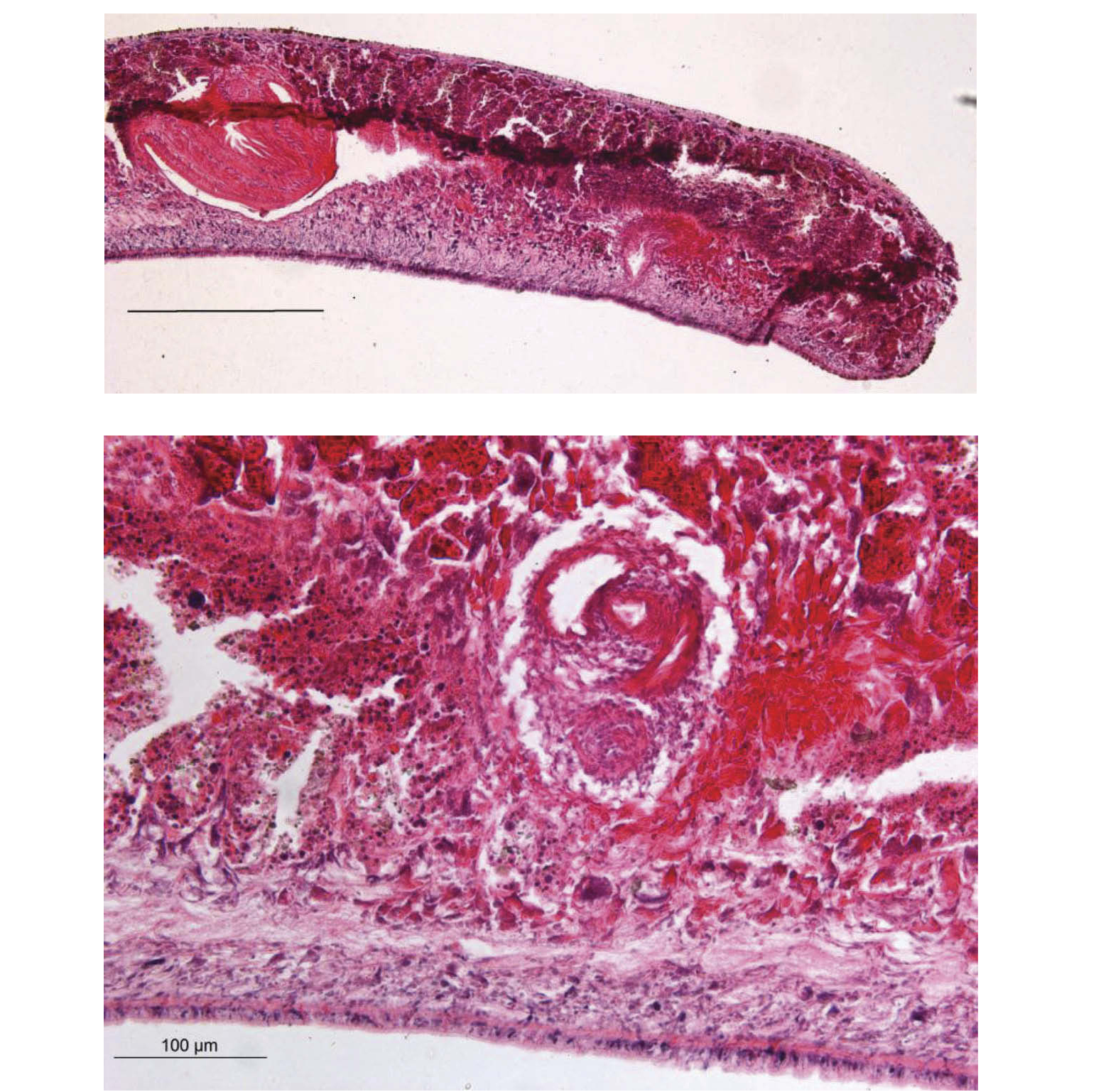