Diagnosis. With the characters of the genus.

Description of Holotype. The colony is long and slender, sparsely branched, with branches emanating from nodes. The holdfast is very small, not much larger than the diameter of the axis ( Fig. 1 View FIGURE 1 A). From the holdfast to the first branch point is about 10 cm, subsequent branches are spaced about 9 to 14 cm apart, with one interbranch distance of 4.5 cm. The two main branches carry two or three subsequent branches, one of which is branched twice more, resulting in two third-order branches that are approximately 18 cm long. Total colony length is about 75 cm (as determined by measurements made on the in situ image in Fig. 1 View FIGURE 1 A).

Polyps are small, less than 3 mm tall when contracted, and are arranged in two irregular rows along the branches, often in alternate fashion ( Fig. 2 View FIGURE 2 A,B). Interpolyp distances in each row range from 5 to 18 mm, but are most frequently about 10 mm. No polyps are present on the distal-most 3 cm of the branches and polyps and tissue appears to be absent along part of the axis from the holdfast to the first branch-point. Because of the relative shortness of the internodes, each internode supports only one or two polyps; occasionally a polyp is located on a node.

The tentacles contract completely into the oral cavity of the polyp ( Fig. 3 View FIGURE 3 D, 7 A). The “mouth” is funnelshaped, demarcated from the pharynx by a flat ring (R, Fig 7 View FIGURE 7 A). The pharynx (as determined by the presence of pharyngeal sclerites) continues the structure ventrally, terminating in a hypopharynx (H, Fig 7 View FIGURE 7 A, 7 C) uniting the eight septa. The sclerites of the pharynx region consist of two distinct types, those that are flat rods with tooth-like protuberances ( Fig. 5 View FIGURE 5 B) being found at the junction with the oral funnel, while the more typical short and wide toothed rods ( Fig. 5 View FIGURE 5 A, 7 D) occupy the lower part of the pharynx.

Variation. The only other specimen collected, CAT 207 - 1, was about 30 cm in length and branched twice. The polyps of the latter specimen were examined in detail and differed from those of the holotype only in having slightly smaller sclerites on the polyp body. The largest sclerites were 2.4 mm in length whereas on the larger holotype the largest body sclerites are about 2.5 mm in length ( Fig. 6 View FIGURE 6 ). But the smaller CAT 207 - 1 had a much larger array of smaller rods on the polyp body and the rods in the tentacles were much smaller than on the holotype.

Etymology. This species is named in honor of Claire Nouvian, founder of the organization Bloom Association, in recognition of her tireless efforts working to reduce the destruction of deep-sea habitats by bottom trawls.

Remarks. Within the Keratoisidinae, the genera Lepidisis , Jasonisis , Acanella , and Isidella were known to branch at the nodes if they branched at all ( France 2007, Alderslade and McFadden 2012). Cladarisis branches at the nodes once the colony reaches sufficient size to begin branching. Among this group, the pattern of branching of Cladarisis is most similar to that seen in Isidella (sparse and lateral, not in whorls), and in fact, the specimens collected were provisionally assigned to that genus as samples were sorted on board the ship.

The genus Isidella currently comprises the species I. elongata Esper, 1788 (type species), I. lofotensis Sars, 1868 , I. trichotoma Bayer, 1990 , I. longiflora ( Verrill, 1883) , and I. tentaculum Etnoyer, 2008 . Only the first three are likely to remain in the genus. Isidella longiflora was originally described and placed in the genus Lepidisis by Verrill, but since that genus came to be thought of as unbranched, Grasshoff (1986; Grasshoff and Zibrowius 1983) moved longiflora to Isidella on the basis of dichotomous branching from the nodes. The exact placement of this species remains to be determined since the existing museum material is not in very good condition. Further, Verrill (1883) noted that branches arising at the nodes could arise singly, or two at a time. In a manuscript that was unfortunately not published before his death, Verrill suggested that L. longiflora should be moved to a new genus “ Acanellides ” (this manuscript is in the collection of the Yale Peabody Museum and photocopies of the pages can be obtained from this author).

Isidella tentaculum differs from all the others in having sclerites in the form of rods, the mesenterially placed sclerites are rods rather than needles, and the branches, while originating at the nodes form more of a candelabra shape. In addition, the axis internodes are thick and heavy, rather than thin and moderately delicate. Unpublished genetic sequence data suggests that I. tentaculum belongs to a clade different from that in which the other three Isidella species (including the type) reside (Scott C. France, personal communication). Thus, for this discussion, the genus Isidella will be considered to consist only of the first three species noted above.

The species Isidella elongata , I. lofotensis , and I. trichotoma have moderately long to very long, thin hollow internodes, polyps armed with sclerites predominantly in the form of needles, with larger needles in groups of 2-3 placed at the mesenterial insertions on the body wall ( Bayer 1990) and usually projecting between the tentacle bases. Branching at the nodes has been termed dichotomous ( Bayer 1990), but should be lateral according to Alderslade (1998), and sparse. The tentacles, when contracted, fold over the mouth but remain exposed. Isidella lofotensis needs redescription (in preparation); however, colonies recently studied in the collection of the Tromsø Museum are bushy, branching at the nodes in all planes, and the sclerites arranged along the mesenterial insertions are large pointed rods rather than thin needles. A very small colony collected in 1872 at the type locality by G.O. Sars, from the collection of the Copenhagen Museum, has a similar arrangement of polyp body sclerites, but all are needles rather than rods (inviting the supposition that as the colony grows and ages the needles either become thicker or are replaced). Both colonies have solid internodes. The tentacles contract but stay exposed.

The genus Cladarisis resembles these three species of Isidella in the form of the colony, the long and thin branches, branching sparse and lateral, and with branches originating at the nodes. Cladarisis differs, however, in several ways. The internodes are generally shorter (mean length, 9 mm). Measurements made on photos of specimens of I. elongata and pieces of a specimen of I. lofotensis , show that internode length in those two species range from 13 to 17 mm and 9 to 15 mm, respectively. Internode lengths in I. trichotoma reach 85 mm ( Bayer 1990). The polyp body of Cladarisis possesses sclerites that are exclusively rods, and the sclerites are organized haphazardly such that none are aligned with the mesenteries. Indeed, the rods are arranged almost randomly along the outside of the polyp, with some on the distal part of the polyp oblique to horizontal, and with longitudinally oriented smaller rods only along the aboral surface of the tentacles. The pharyngeal sclerites of Cladarisis also differ significantly from those of I. trichotoma (details for the other two species are missing). In the latter, the sclerites are elongate, slightly toothed rods, verging on being flat rods, whereas in Cladarisis one group of pharyngeal sclerites are short, wide, and thick, with protuberances on all sides. 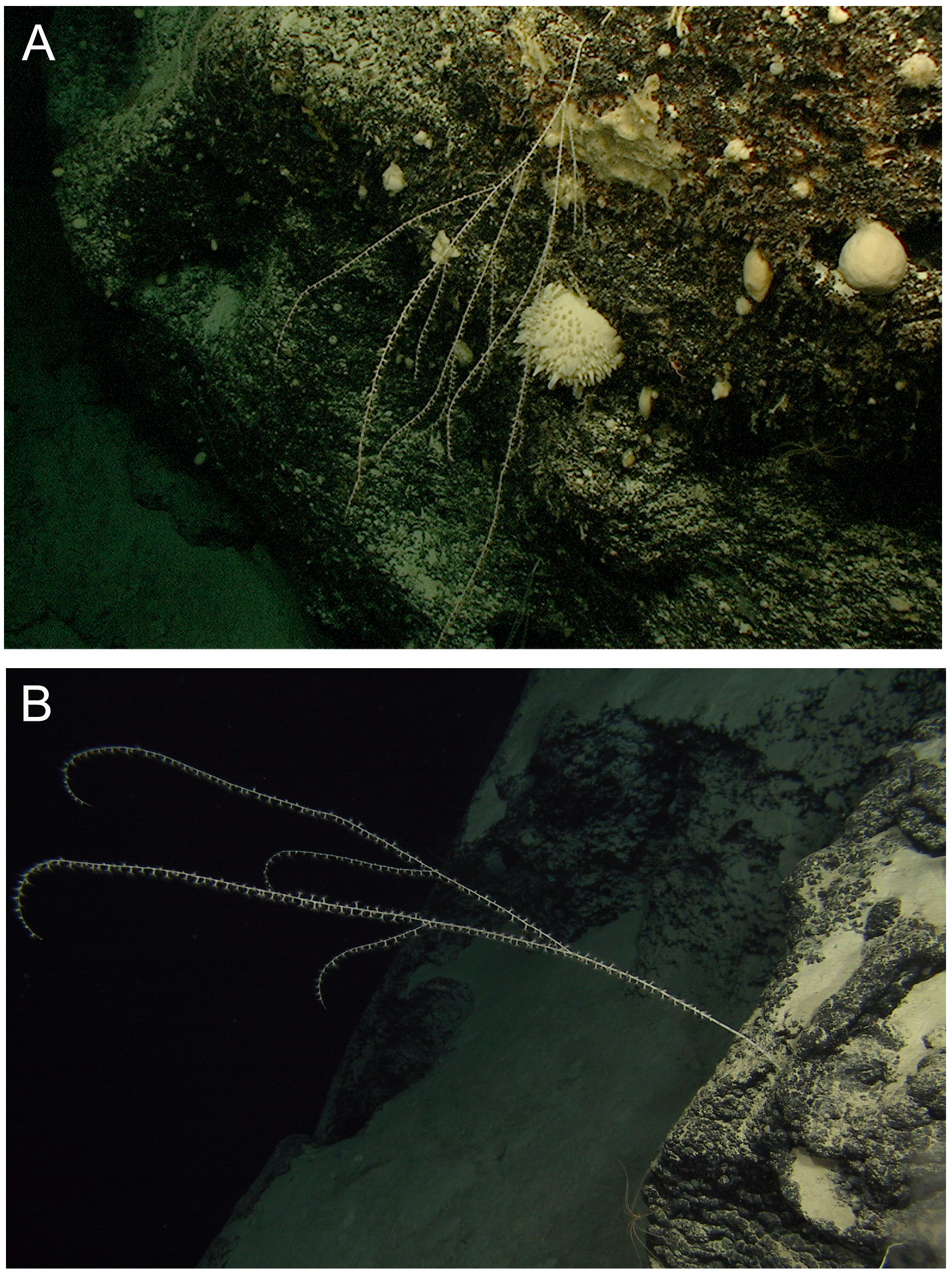