Second morphology includes teeth with a hexagonal crown. One such tooth worn flat through in vivo wear. Occlusal surface formed of dentine surrounded by a layer of enameloid. All have thin and rounded labial margin; transverse furrows are located at the lingual crown foot. All lateral teeth with one-to-two nutritive grooves. Basal attachment surfaces of lobes triangular. The two other teeth with transverse cusp at center of the crown; duller on one specimen due to ablation. Enameloid of ablated specimen is polished and lacks detail. Remaining tooth exhibits discontinuous vertical ridges on the labial and lingual sides of cusp.

The discovery of Meridiania  in the Tallahatta Formation and Gosport Sand was surprising, considering both occurrences would represent significant range extensions from Zone NP11 strata of the Ypresian Nanjemoy Formation of Virginia ( Kent 1999b). In fact, when MSC 38822.1 ( Fig. 51–LView Fig) was first encountered within the ACl-15 Gosport Sand sample (Zone NP17), our immediate suspicion was that the specimen represented a contaminant. However, the discovery of an additional tooth from the same locality ( MSC 38822.2, Fig. 51View Fig E–H), as well as a tooth from the Gosport Sand at site ACl-4 ( MSC 38820View Materials, Fig. 51View Fig M–O), spurred us to reconsider this possibility. Closer inspection of these specimens revealed similar preservation to the other myliobatiform teeth within the Gosport samples from both localities.

Unfortunately, only one of the four teeth we examined is preserved well enough for meaningful comparison to M. convexa  , the only species currently within the genus (i.e., Case 1994a; Kent 1999b; Cicimurri 2010). The three Gosport Sand Meridiania  specimens we examined are morphologically similar to type specimens of M. convexa  , which Case (1994a) interpreted as having been part of a dentition similar to that of Dasyatis  . However, Cicimurri (2010) reevaluated the dentition of M. convexa  and concluded that the type material represented lateral teeth in a dental battery that was more similar to that of Rhinoptera  . The broken tooth recovered from the Tallahatta Formation is likely equivalent to the Meridiania  tooth shown by Cicimurri (2010: 103, fig. 3.1), which was considered to represent a proximal lateral tooth.

The best specimen, MSC 38822.1 ( Fig. 51View Fig A–D), was compared to a sample of several hundred M. convexa  lateral teeth from the upper Thanetian Williamsburg Formation of South Carolina (at SC). The only notable differences between the samples is that MSC 38822.1 exhibits a slightly thicker crown margin and the furrows at the lingual crown foot are more concave. However, as Cicimurri (2010) noted, the crowns of M. convexa  lateral teeth are variable and the slight differences observed on the Gosport Sand specimen cannot be accurately interpreted at this time. Suffice to say, the specimens represent a significant range extension for the genus, from Zone NP11 to Zone NP14 (Tallahatta Formation), with the youngest known record occurring in the Gosport Sand (Zone NP17). 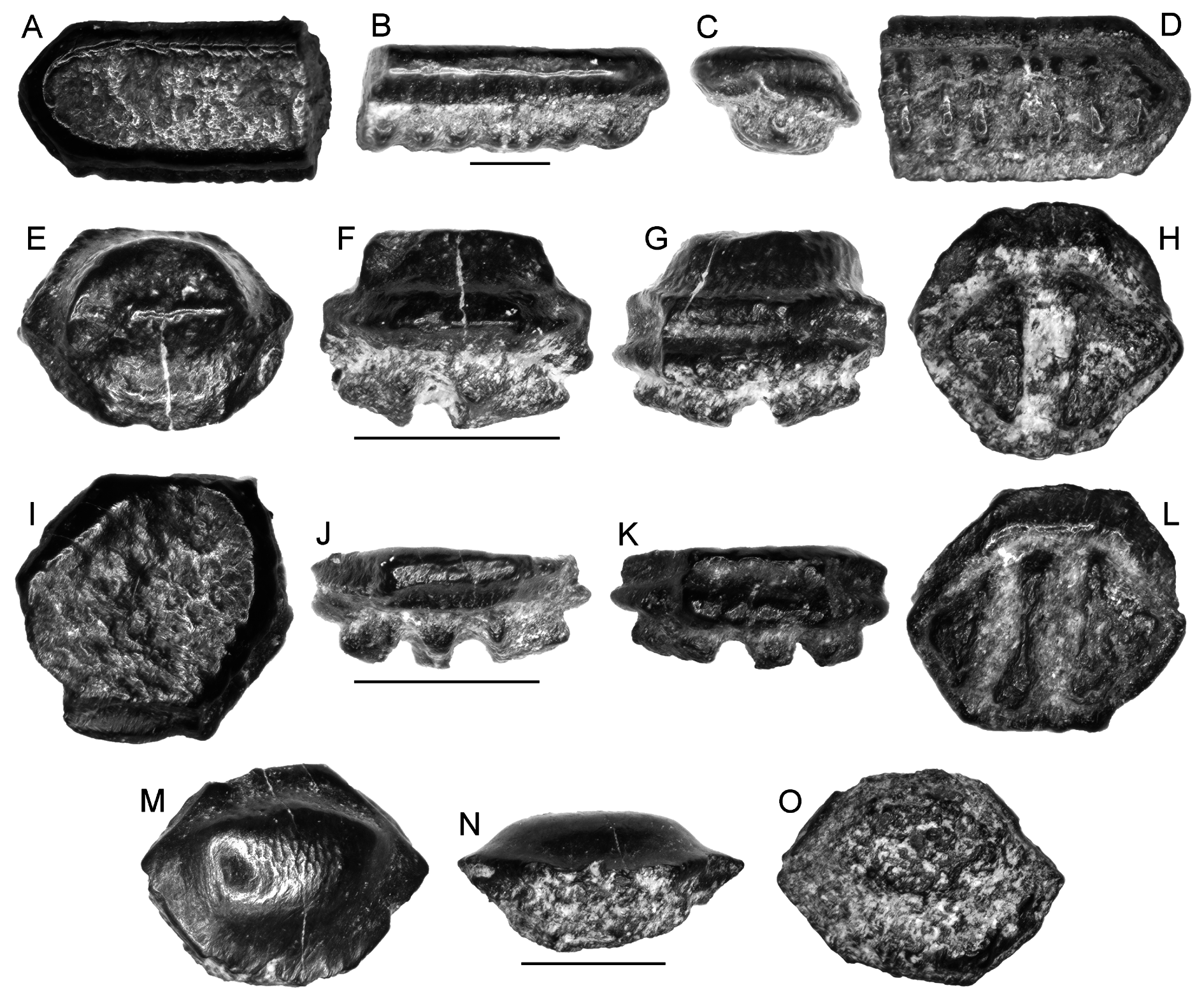