A single median tooth is represented in our sample. Tooth is very wide, but labiolingually thin, sixsided. Occlusal surface concave across nearly the entire width; occlusal surface outlined by a sharp, irregular rim. In oral view, crown is conspicuously smaller in area than the crown base. Labial crown face concave, with lower half projecting labially and upper half nearly vertical. Lingual face vertical and straight, slight lingual projection at the crown foot. Very base of lingual crown bears weak transverse ridge immediately above the root. All crown faces with coarse ornamentation of vertical anastomosing and interconnected ridges that become finer apically. Polyaulocorhize root as high as the crown. Labial and lingual faces nearly vertical; 13 narrow lobes are separated by 12 nutritive grooves.

When originally described, Eoplinthicus  was not directly differentiated from Burnhamia  , possibly because the two genera were not known to co-occur within the Yazoo Clay ( Cappetta & Stringer 2002). However, both Eoplinthicus  and Burnhamia  were collected from the upper Gosport Sand (see above), and a differential diagnosis is provided here. Eoplinthicus yazooensis  is now known from three teeth (including two from the Yazoo Clay), all of which can be distinguished from Burnhamia  by having an occlusal surface that is significantly smaller in area than the crown base. In contrast, the occlusal surface on Burnhamia  teeth is equal to, or only slightly smaller in area than, the crown base. Additionally, the lower half of the labial face of E. yazooensis  is broadly rounded, whereas on Burnhamia  the labial crown foot is developed into a sharp horizontal or basally directed projection. In profile, the lateral angles of E. yazooensis  are not as sharply defined as observed on Burnhamia  . Also, the occlusal surface of E. yazooensis  bears a series of fine labiolingually oriented striations, as opposed to a somewhat reticulated network of ridges on the oral surface of Burnhamia  teeth. The labial margin on E. yazooensis  is less sharply defined than Burnhamia  , which has a sharp six-sided outline in occlusal view. Cappetta & Stringer (2002) implied that Eoplinthicus  was a direct descendant of Burnhamia  , but this theory must be further examined in light of the discovery that these taxa were coeval within the Gosport Sand paleoenvironment.

A second Eoplinthicus  species, E. underwoodi Adnet et al. 2012  , has been reported from middle-toupper Eocene strata in Africa. This species differs from E. yazooensis  in being smaller in size (with six root lamellae) and by having less developed crown ornamentation.

The lone specimen in our sample was collected from the upper Gosport Sand at site ACh-21. Middle Bartonian, Zone NP17.

The crown on these teeth is distinctive for their tall, laterally compressed cusp, conspicuous, diverging basal labial projections and roughly square oral outline. Although similar to teeth of Jacquhermania  and the male teeth of “ Dasyatis  ” described herein, the three teeth in our sample differ significantly in having a laterally compressed cusp that lacks lateral cutting edges. In addition, male teeth of “ Dasyatis  ” bear ornamentation of various types (see above). Although the specimens are morphologically comparable to, and within the size range of, most members of the Torpedinidae  , particularly Torpedo  , the Lisbon specimens differ from all Recent and fossil Torpedinidae  , except Eotorpedo  , in lacking distinctive lateral cutting edges extending from the cusp apex to nearly the crown base (Cappetta 1988; Herman et al. 2002).

Eotorpedo White, 1935  can have a cusp similar to the Lisbon specimens described above, as well as labial projections separated by a deep embayment and a notch at the lingual crown foot. A significant difference between the Lisbon specimens and these two species of Eotorpedo  is the lack of a basal transverse crest on the Alabama teeth. Some specimens identified as Eotorpedo  , including Eotorpedo nolfi Herman, 1974  ( Herman 1974: fig. 1, a-c) and Eotorpedo jaekeli (Case, 1994)  (see Case 1994a) may in fact be Jacquhermania  ( Cappetta 2012; Cappetta & Case 2016). It is possible that the Claibornian specimens described above represent juvenile teeth of Jacquhermania  , but to our knowledge this morphology has not previously been attributed to this genus. Additional, more complete, specimens are needed to more accurately identify this morphology.

The specimens in our sample were collected from the basal Lisbon Formation at site ACov-11. Lower Lutetian, Zone NP15. 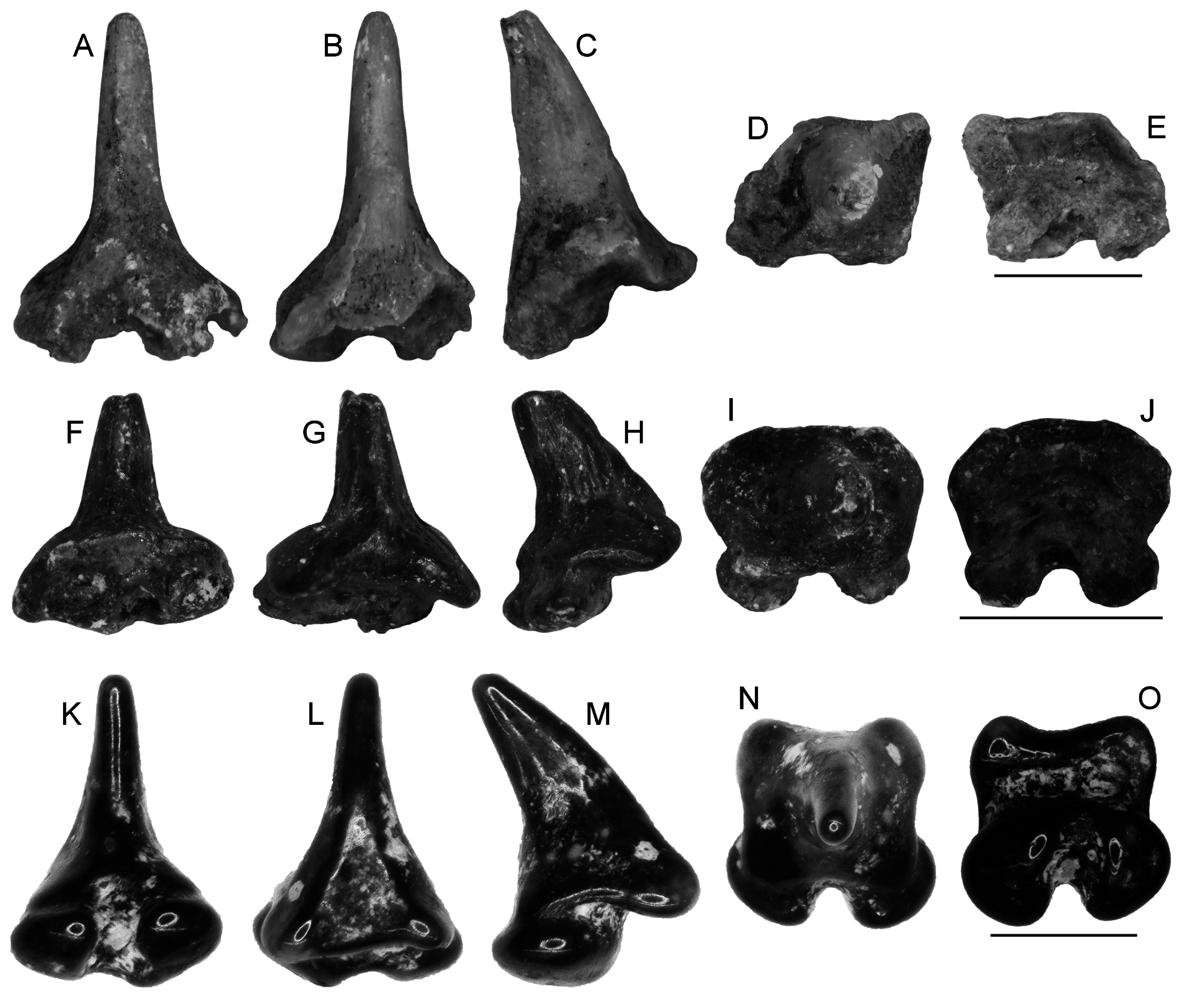