The teeth in our sample are superficially similar to those of Trichiurides sagittidens  and Trichiurus oshosunensis  , but differ from both taxa by having one to two lateral carinae as opposed to anterior and/ or posterior carinae. The specimens in our sample appear to be conspecific with Arambourg’s (1952) Trichiurus plicidens  , from the Ypresian of Morocco, as they are slightly sigmoidal, have one-to-two lateral carinae, lack an apical barb, and have striated ornamentation ( Arambourg 1952: 265, pl. 35, figs 39–42). Arambourg (1952) tentatively placed this species within Trichiurus  because of the striations occurring on the tooth crown.

Herein we argue for a new combination for the plicidens  morphology, placing it within the genus Eutrichiurides  . This stems from the fact that the plicidens  morphology has one-to-two lateral carinae (as opposed to anterior or posterior carinae), which is a characteristic of Eutrichiurides  as seen on the type specimen of E. winkleri  ( Casier 1946: pl. 4, fig. 19b), on White’s (1931: fig. 2) figured specimen of E. orpiensis (Leriche, 1906)  , and on specimens illustrated by Casier (1944) when he redescribed E. delheidi (Leriche, 1908)  . Although Gago (1997) observed that apical barbs are present on adult teeth but absent on juvenile teeth of extant Trichiurus  species, Casier (1944) noted that barbs are completely lacking on teeth of all Eutrichiurides  (see White 1931: fig. 2; Casier 1944: pl. 1 figs 5–9, 12–18, 1946: pl. 4, fig. 19b; Arambourg 1952: 265, pl. 35, figs 39–42). The combination of having lateral carinae, striations on the tooth crown, and the lack of an apical barb on all the observed specimens suggests these teeth are more closely aligned with Eutrichiurides  , rather than Trichiurides  or Trichiurus  , and serves as the basis for this new combination. An “indeterminate fish tooth” figured by Otero et al. (2015: 14, fig. 11) from the Bartonian of Libya may be conspecific with E. plicidens  comb. nov.

The specimens in our sample were collected from the contact of the Tallahatta and Lisbon formations at sites ACh-14 and ACov-11, the basal Lisbon Formation at site ACov-11, and the basal Gosport Sand at site ACl-4. Lower Lutetian to middle Bartonian, zones NP14 to NP17. 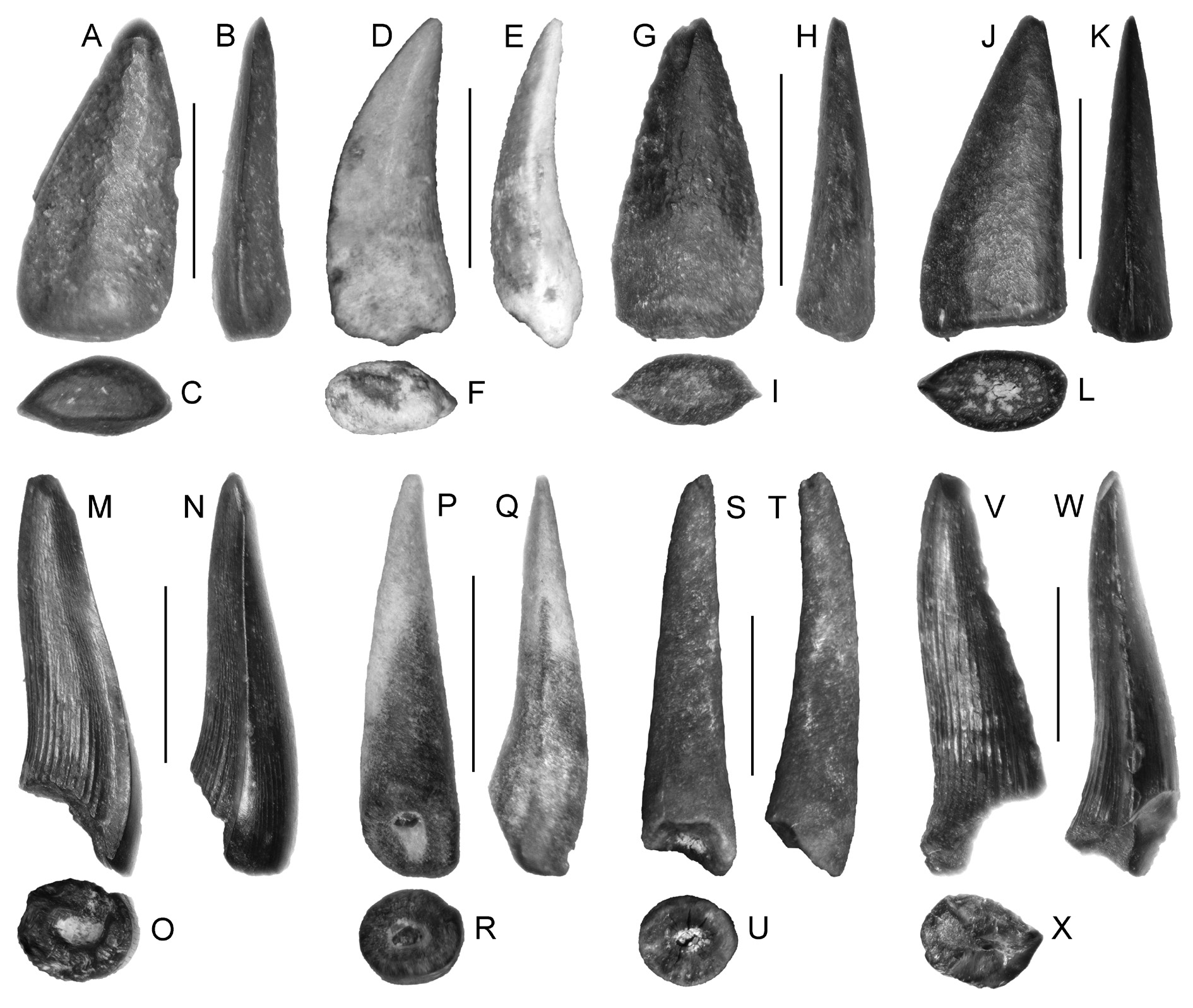