Paleogene specimens from Alabama with a similar morphology to the teeth in our sample have traditionally been referred to the genera Otodus  or Cretalamna  (see Ehret & Ebersole 2014; Maisch et al. 2014; Cappetta & Case 2016). For many years authors have recognized the morphological similarity of Cretalamna  and Otodus  teeth, lending strong support to the idea that the two genera are part of a single lineage where Cretalamna  gives rise to the Otodus  group. It is readily accepted that the transition from Cretalamna  to Otodus  occurred in the Paleocene ( Siverson 1992; Zhelezko 2000; Ward 2010; Siversson et al. 2015;), but it is unclear as to how late in the Paleogene members of the genus Cretalamna  persisted. Cretalamna  specimens have been reported in Ypresian deposits elsewhere ( Cappetta 2012) and deposits as young as the Lutetian in Alabama ( Cappetta & Case 2016), and often these teeth have been referred to the Late Cretaceous taxon Cretalamna appendiculata (Agassiz, 1843)  (see Noubhani & Cappetta 1997; Adnet 2006; Carlsen & Cuny 2014; Vasquez & Pimiento 2014). This later species, however, has become a ‘waste-basket’ taxon, and recent studies have shown that C. appendiculata  sensu stricto is, at present, stratigraphically and geographically restricted to the Turonian of England ( Siverson 1999; Siversson et al. 2015). A redescription of the genus by Siversson et al. (2015) has shown a good degree of morphological variability among the teeth of the various Late Cretaceous Cretalamna  species, making it difficult to determine what characteristics can be utilized to separate them from those of the closely related Otodus  . This lack of disparity can be seen among the unserrated Paleocene and Eocene otodontid teeth recovered in Alabama, as it remains uncertain whether they should be assigned to Otodus  or Cretalamna  . Although much more clarity is needed to resolve the taxonomy of these unserrated Paleogene otodontids, it is our opinion that the Claiborne specimens are likely best placed within Otodus (Otodus)  because it seems more parsimonious to extend the Paleocene-derived Otodus (Otodus)  lineage into the middle Eocene, as opposed to further extending the range of the Late Cretaceous-derived Cretalamna  sensu stricto. Furthermore, we have observed that, towards the commissure, the teeth of several fossil lamniform sharks become broader, low-crowned, more recurved, and with wider lateral cusplets than teeth in more anterior positions. Therefore, Eocene specimens identified as Cretalamna  could represent more lateral/ posterior teeth of Otodus (Otodus)  .

Two species of Otodus  have previously been described from Paleogene deposits in Alabama, Otodus mediavius ( Leriche, 1942)  and O. obliquus Agassiz, 1843  ( Ehret & Ebersole 2014). The taxonomic validity of O. mediavius  , however, is in question because Leriche (1942) did not designate a holotype, and his syntypes included a range of morphologies from both the Danian Midway Group of Wilcox County, AL, and the Thanetian Cannonball Formation of North Dakota, USA. Furthermore, Arambourg (1952), Cvancara & Hoganson (1993), and later Müller (1999) considered O. mediavius  a junior synonym of O. obliquus  , a species originally described from the Ypresian London Clay in England. As part of this study, the specimens in our sample were compared directly to the O. mediavius  syntypes at the USNM ( USNM 8256, USNM 25957-59, USNM 25961–67, USNM 25970), as well as illustrated O. obliquus  specimens from the London Clay (i.e., Agassiz 1843: fig. 208a–e; Casier 1966: pl. 6–7). The teeth in our sample ( Fig. 9View Fig A–L) differ from both of these taxa in being of smaller size (not exceeding 3.0 cm in greatest height for anterior teeth, 1.5 cm for lateral teeth), and by having a main cusp that is not as wide (especially those in the anterior files). Furthermore, the mesial and distal cutting edges on the main cusp on the anterior teeth in our sample ( Fig. 9View Fig A–F) are concave at the base, as opposed to straight or often bi-convex on the teeth of O. mediavius  and O. obliquus  . Moreover, the lateral teeth in our sample ( Fig. 9View Fig G–L) have a shorter crown and never more than a single pair of lateral cusplets (as opposed the occasional presence of up to two pairs on both O. mediavius  and O. obliquus  ). Although some of the teeth in our sample may indeed represent a stratigraphically young (upper Ypresian) occurrence of O. obliquus  , here we choose to remain conservative and assign them to Otodus (Otodus)  sp. as to resolve the taxonomy of middle Eocene Otodus  specimens in Alabama would require many more specimens than what is currently available. For the purposes of this report, we utilize the subgenus Otodus (Otodus)  to differentiate unserrated Otodus  teeth from those with serrations (see below). 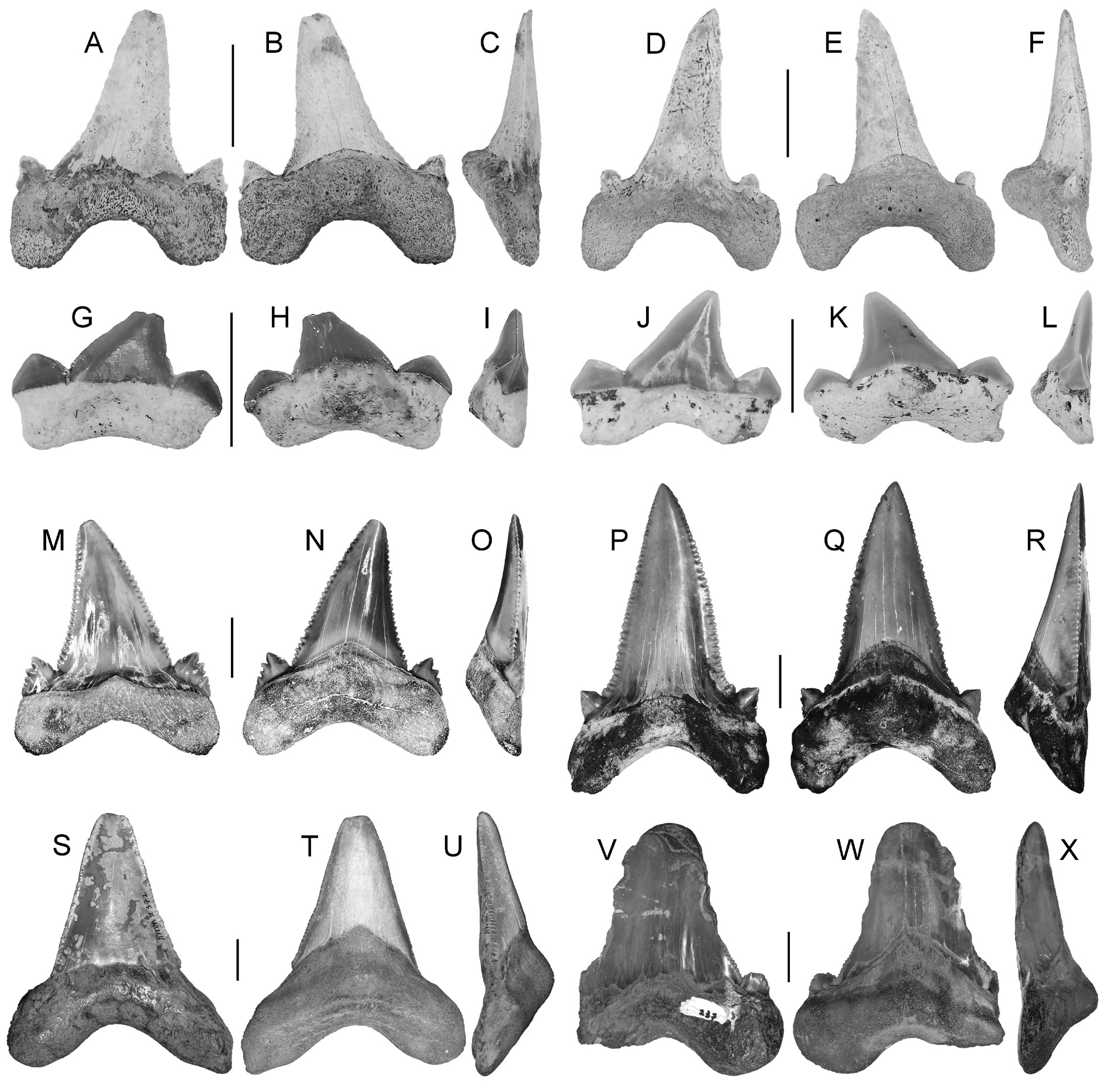