Our Rhizoprionodon  sample exhibits monognathic, dignathic and gynandric heterodonty. Monognathic heterodonty is expressed as a more erect crown on upper and lower anterior teeth when compared to lateral teeth, and lateral teeth are wider than tall with a more inclined main cusp. With regard to dignathic heterodonty, the cusp of upper teeth is taller and more broadly triangular than on lower teeth. Also, lower anterolateral and lateral teeth have a more elongated mesial edge. Male teeth have a mesiodistally thinner crown than those on females, and the distal edge of the crown is often less convex.

Thurmond & Jones (1981: 68, fig. 33) first reported Eocene representatives of Rhizoprionodon  in North America when they referred teeth to this taxon that were derived from the basal Gosport Sand at site ACl- 4 in Clarke County, AL. The presence of this genus within the Claiborne Group of Alabama was confirmed as part of this study by comparing the teeth in our sample to the dentitions of extant Loxodon  (one species), Rhizoprionodon  (eight species), and Scoliodon  (one species) housed at MSC and SC and as illustrated by Springer (1964). Of these taxa, the teeth in our sample most closely resemble those of extant species of Rhizoprionodon  with respect to the shape of the mesial and distal edges of the crown, the mesiodistal thickness of the crown base, overall crown height, and the extent of distal inclination.

Examination of the dentitions of Recent female Rhizoprionodon acutus (Rüppell, 1837)  and Rhizoprionodon terraenovae (Richardson, 1836)  specimens in the SC collection revealed differences between the distal heels between the two species. The finely serrated distal heel of R. acutus  teeth are broadly convex, but a single small denticle often provides some angularity, most evident on upper anterior teeth. Teeth in the R. terraenovae  dentition exhibit a similarly serrated distal heel, but a distinctively large denticle results in a more angular appearance than R. acutus  , particularly on the upper teeth. We did not observe any significant variation within the Claiborne sample that could indicate multiple species, and we refer all of the material to one taxon. Our Claiborne Group teeth are similar in age and overall morphology to the type specimens of Rhizoprionodon ganntourensis  as described and figured by Arambourg (1952: pl. 26, figs 49–63), and both samples have teeth with a distal heel that varies in shape from rounded to angular. Due to these similarities, the Claiborne material is assigned to R. ganntourensis  , currently the only recognized Eocene species within the genus (see Cappetta 2012).

The dentition of extant Scoliodon laticaudus Müller & Henle, 1838  exhibits gynandric heterodonty, with tooth crowns on female lateral and posterolateral teeth being much more distally inclined than those in the male dentitions (which instead have a thin crown with an upturned apex and an elongated mesial shoulder). Only two species of extant Rhizoprionodon  possess gynandric heterodonty ( Springer 1964), with male anterolateral teeth having a thinner cusp base than on female teeth. A similar pattern can be observed within our Rhizoprionodon  sample. Male anterolateral teeth of Rhizoprionodon  are similar to those of Scoliodon  (see Cappetta 2012: 300, fig. 283), but can be differentiated by their lack of a lingually twisted cusp apex.

Cappetta & Case (2016) did not identify Rhizoprionodon  in their sample of teeth from site ACov- 11 in Covington County, AL. However, the authors figured three specimens (pl. 10, figs 2–4) they referred to Sphyrna  sp. that, in our opinion, belong to Rhizoprionodon  . 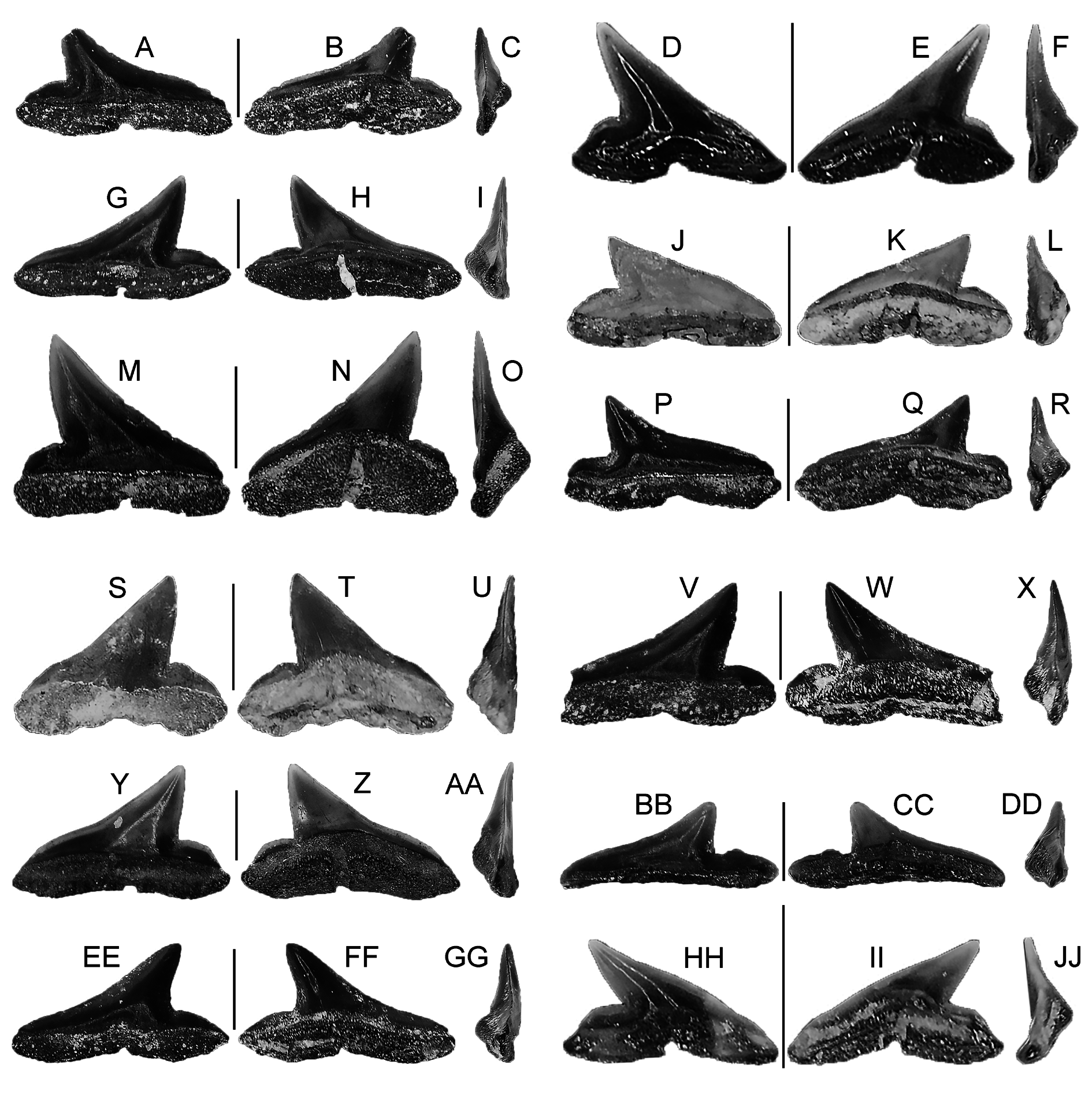