Five species of Galeocerdo  have been reported from Paleogene deposits in Alabama, including G. aduncus (Agassiz, 1843)  , G. alabamensis Leriche, 1942  , G. clarkensis White, 1956  ; G. eaglesomei White, 1955  ; and G. latidens (Agassiz, 1843)  . Both G. aduncus  and G. latidens  were first reported from the “Tertiary of Alabama” by Tuomey (1858); however, these specimens were never illustrated and were destroyed by fire near the end of the Civil War in 1865 (see Ebersole & Dean 2013). Hence, the identity of his material cannot be corroborated. Woodward (1889) assigned 18 teeth, purportedly from Alabama but housed within various NHMUK collections, to G. aduncus  . White (1956) reexamined Woodward’s (1889) specimens and referred several to a new species, Galeocerdo clarkensis  , and determined that the remaining teeth were indeed correctly identified as G. aduncus  , but they instead originated from Malta. A few years prior, Leriche (1942) named Galeocerdo alabamensis  based on a single tooth derived from Priabonian deposits in Choctaw County, AL. Both G. eaglesomei  and G. latidens  have since been reported from various Claiborne Group deposits in the state. Westgate (2001), for example, reported 13 G. latidens  specimens from the Gosport Sand at site ACl-4 (TMM 43412.2) in Clarke County. Feldmann & Portell (2007) later reported the occurrence of G. latidens  from the contact of the Tallahatta and Lisbon formations at site ACov- 11 in Covington County. However, because these authors never figured their specimens we cannot confirm or refute their identifications. Clayton et al. (2013) and Cappetta & Case (2016) also reported G. latidens  from site ACov-11, but examination of actual and figured specimens leads us to conclude that they all to belong to Physogaleus  . Thurmond & Jones (1981: fig. 28, left) figured a tooth from Monroe County, AL that they referred to Galeocerdo alabamensis  , but our reexamination of this tooth ( ALMNH PV 2005.6.448) revealed that it instead belongs to G. eaglesomei  . Maisch et al. (2014: fig. 3, 9–14) described and figured two G. eaglesomei  teeth from the contact of the Tallahatta and Lisbon formations in Choctaw County, and our analysis confirmed their identification.

As part of this study, teeth of Paleogene Galeocerdo  species that have been reported from Alabama were compared to those within several Recent jaw sets of Galeocerdo cuvier Péron & Leseur, 1822  , the only extant member of the genus. The purpose of this analysis was to gain a better understanding of the types and degrees of heterodonty (monognathic, dignathic, ontogenetic) occurring within the jaws of Galeocerdo  . This analysis allowed us to better define the teeth of this genus, test the validity of published differential characteristics for the various reported species, and ultimately help determine whether these species are valid, nominal, or should belong to a different genus. To test for differences that could be attributed to ontogeny, the fossil Galeocerdo  teeth in our sample were directly compared to those within three sizes of G. cuvier  jaws. Measured in terms of greatest internal mesiodistal width, the three jaw sizes examined were as follows, small =11.0 cm; medium = 23.5 cm; and large 40.6 cm. A critical examination and comparison of these three G. cuvier  jaws provided the following key characteristics that, in turn, helped diagnose the teeth belonging to this genus:

1. Within a jaw, the number of distal heel cusplets decreases the more laterally a tooth is positioned.

2. Among the various jaws, the number of distal heel cusplets on the teeth increases as the shark gets older (presumably because the teeth get larger).

3. Among the various jaws, the tooth serrations become more compound and complex as the shark gets older.

4. Within a jaw, teeth in the anterior and anterolateral files tend to have a mesial edge that is slightly angular. Teeth in the lateral and posterior files have a smoothly concave mesial edge.

5. Within a jaw, teeth in anterior and anterolateral files have a distal edge that is more convex than those in the lateral and posterior positions.

6. Within the jaw, anterior teeth are taller than wide; lateral teeth are wider than tall.

7. Within the jaw, the cusps on the upper teeth are slightly more erect than those in the equivalent position of the lower jaw. This characteristic can only be observed in jaw sets, not on isolated teeth.

8. Within the jaw, the teeth that are about to shed (the oldest teeth) are smaller than the replacement teeth. Furthermore, replacement teeth generally have an additional distal cusplet. This phenomenon was most evident on the smallest jaw, indicating rapid tooth-size increase in juveniles.

10. Within the jaw, the serrations on the mesial edge of anterior teeth are larger than those on the distal edge. In the lateral positions, the teeth are more evenly serrated.

11. Among the various jaws, the size difference between the mesial and distal serrations on the anterior teeth was observed on each specimen, suggesting this phenomenon is not related to ontogeny.

Although discernable monognathic heterodonty exists within the dentition of G. cuvier  , the teeth of this species, regardless of size/age or position, have the following defining characteristics: all have a distally inclined cusp; a conspicuous notch where the distal edge meets the distal heel; a convex mesial edge; serrations that are largest on the medial part of the mesial edge, but much finer serrations on the upper half, extending nearly to the apex; very large serrated cusplets on the distal heel but fine serrations on the distal edge, which extend nearly to the apex.

With regard to Galeocerdo eaglesomei  and Galeocerdo latidens  , the latter species was originally erected by Agassiz (1843) based on teeth from an unknown locality and horizon. White (1926) later referred 39 teeth that were derived from Eocene deposits in Nigeria to G. latidens  . Dartevelle & Casier (1943), however, expressed their opinion that the G. latidens  teeth figured by White (1926: pl. 6), as well those figured by Stromer (1905b: 175, pl. 14, figs 10–15), differed from the specimens reported by Agassiz (1843: pl. 26, figs 22–23) and possibly represented a new taxon. In agreement with these assessments, White (1955) subsequently assigned the teeth he figured in 1926 to a new species, Galeocerdo eaglesomei  . White (1955) also referred the teeth figured by Stromer (1905b) to this new taxon and designated a specimen from his 1926 publication (pl. 6: 2) as the holotype. Although we are not certain, White (1926: pl. 6) may have originally referred his specimens to G. latidens  because the lateral teeth (figs 7–10, 17–21) were wider than tall and appeared conspecific with the type specimen illustrated by Agassiz (1843: pl. 26, figs 22–23), which is a tooth from a lateral or posterior position. It appears that when Dartevelle & Casier (1943) pointed out that several other of White’s (1926) teeth did not match Agassiz’s (1843) type specimen, White (1955) made the decision to assign his 1926 (pl. 6) teeth, as well as those in Stromer (1905b: pl. 14), to G. eaglesomei  . However, Stromer’s (1905b: pl.14) specimens are of interest because he combined teeth with the G. eaglesomei  morphology with several lateral teeth (pl. 14, figs 11, 13, 15) that appear to be conspecific with Agassiz’s (1843) G. latidens  holotype. In fact, one of the teeth figured by Stromer (1905b: pl. 14, fig. 15) appears nearly identical to Agassiz’s (1843) type specimen, possibly being from the same tooth position (but from the opposite side of the jaw). As part of White’s (1955: 320) type description for G. eaglesomei  , he described how the teeth could be differentiated from those of G. latidens  by their “greater relative height and shorter base, while the anterior margin is much more convex and posterior emargination less marked owing to the length of the denticles, which also reach nearer to the tip.” These characteristics, however, fall within the range of monognathic heterodonty as observed on the Recent jaw sets of G. cuvier  . Therefore, it is our belief that White (1955) failed to recognize the degree of heterodonty within Recent Galeocerdo  , leading him to erect a new species, G. eaglesomei  , for what were instead the anterior teeth of G. latidens  .

Despite our contention that the G. eaglesomei  and G. latidens  morphologies of White (1926, 1955) and Stromer (1905b) are conspecific, the designation of the former as a junior synonym of G. latidens  is problematic. As explained by Agassiz (1843), his figured holotype was collected from an unknown locality and horizon. Because this likely renders G. latidens  as a nomen dubium, we suggest the usage of G. eaglesomei  for teeth with this morphology, as it is a name that is available and based on specimens from a known locality and horizon.

It is also our conclusion that many teeth previously referred to “ G. latidens  ” (i.e., Thurmond & Jones 1981: fig. 28, right; Van den Eeckhaut & De Schutter 2009: pl. 20, figs 8–11; Clayton et al. 2013: fig. 3J; Cappetta & Case 2016: pl. 8, figs 12–16) are misidentified, and instead are lateral teeth belonging to Physogaleus alabamensis  comb. nov. ( Leriche 1942). Teeth of Galeocerdo  can be differentiated from P. alabamensis  comb. nov. by the presence of serrated mesial and distal cutting edges, with serrations extending nearly to the cusp apex. Our examination of Recent G. cuvier  jaws indicates that, these fine serrations are always present (unless taphonomically lost) regardless of tooth size and position, and their presence is therefore not related to heterodonty (monognathic or ontogenetic). On the lateral teeth of both P. alabamensis  comb. nov. and P. secundus  , cutting edges are smooth and mesial denticles never reach the main cusp apex.

Although Galeocerdo  has traditionally been placed within the Carcharhinidae  (see Compagno 2005; Cappetta 2012; Nelson et al. 2016), recent mitochondrial DNA studies have revealed Galeocerdo cuvier  to be an outgroup from this otherwise monophyletic family (see López et al. 2006; Naylor et al. 2012). Furthermore, the dentitions of Recent G. cuvier  specimens exhibit little dignathic heterodonty, with isolated upper and lower teeth being difficult to distinguish. The presence of strong dignathic heterodonty is a defining characteristic for nearly all members of the Carcharhinidae  , as the overall morphology of upper teeth is generally substantially different from that of the lower teeth (see Compagno 1984; Voigt & Weber 2011). Because of this we follow Herman et al. (2010) in placing Galeocerdo  , and all recognized fossil species, within the monogeneric family Galeocerdidae. 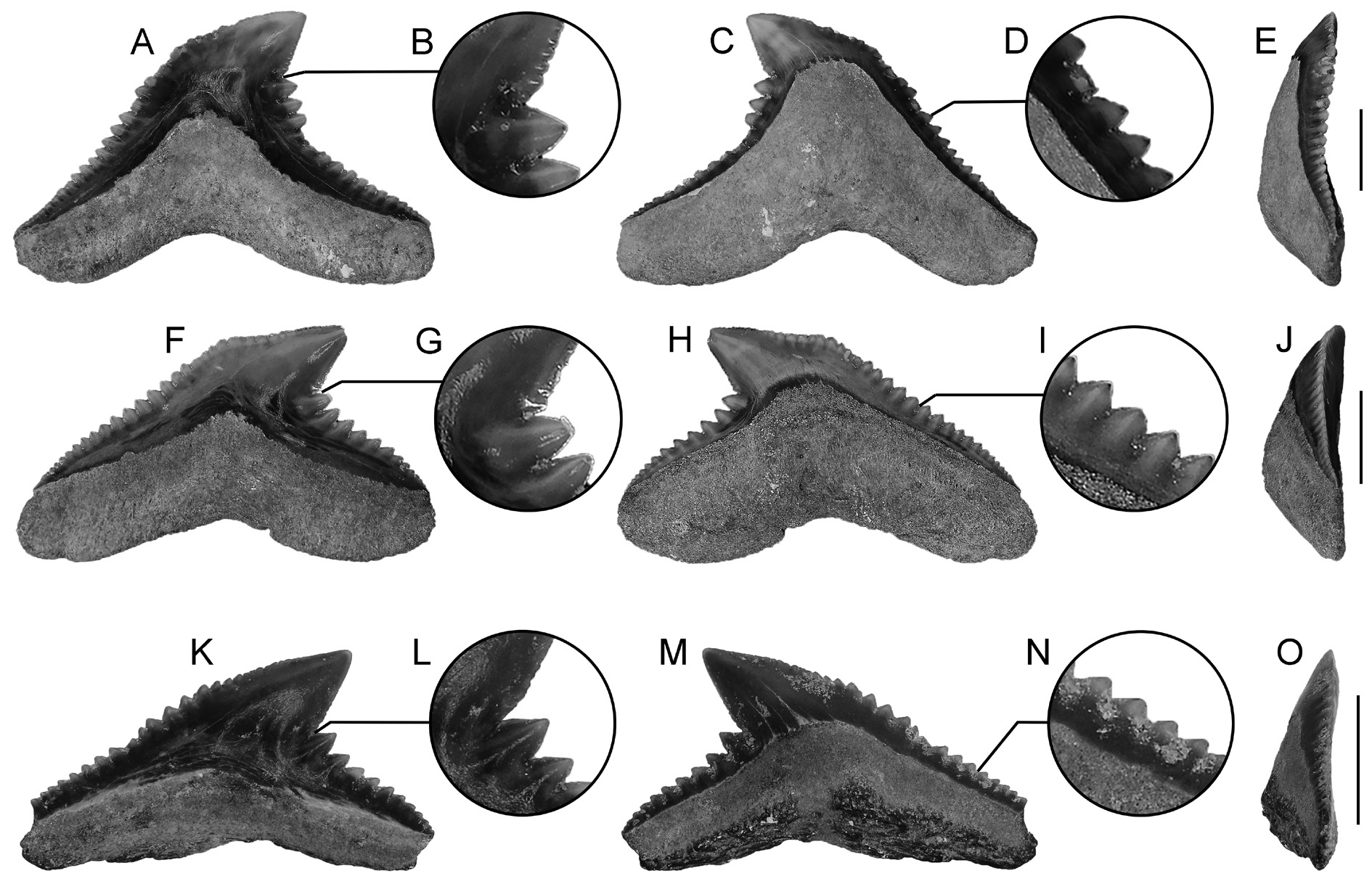