The generic description of Grebennikov is derived from 37 morphological characters used to test the validity of Discheramocephalini  as a monophyletic tribe and focuses, as a result, mainly on absent features rather than those which are present. The following revises some details of his description and adds others.

Similar to Cissidium  in possessing a dumb-bell shaped antennomere 11 (although the dumb-bells of D. fabrum  sp. n. and D. denticulatm  sp. n. are represented by only a slight median narrowing of the segment) but differing in the presence of a clearly visible horizontal perforation of the mesoventral keel and of two further perforations towards the mesoventral anterior corners, absence of serrations on the hind coxal margin of the meso/meteventral suture and a single, clearly defined, indentation of the posterior margin of the pronotum opposite the scutellum. The ventral surface of the back of the head has a narrow band of +/- 100 microscopic punctures and the dorsal surface a similar band of +/- 30 punctures. Similar punctures are present on the pre-mentum and mentum. Arms of the metendosternite very long and thin reaching almost to the anterior corners of the metaventrum. Hind coxae separated by approximately one quarter of the metaventral width, coxal plates small. Spermathcae ranging from globular to tubular. Sexual dimorphism is present in the genus in the form of reduced eyes and an increased number of hairs on antennomeres 10–11 of some males, and micropterism/ apterism in some females.

Note. the form of the antennae, genitalia and pronota provide the best means of distinguishing species but the last require very careful orientation so that they are viewed from directly above (some of the figs. 56–61 are not viewed in this way). In normal view, when the pronotum slopes down at the front, the lateral margins can easily appear to be angled and/or to have straight edges particularly in the posterior half. Similarly, the tip of the aedeagus is best viewed from several angles to be sure of correctly determining its shape.

Unless stated otherwise all species share the following features in addition to those mentioned in the generic descriptions:

General: appearing polished and shining between the foveae, with no, or little, visible evidence of microsculpture or cuticular structure except around the mesoventral keel and collar.

Vestiture: long, yellow/golden, recumbent and overlapping particularly on the pronotum. None of the species possesses the mixture of short and long hairs evident in the African D. usambarense  .

Head: vertex with a shallow depression running across the forehead immediately above the eyes and small groups of +/- 10 hairs towards the lateral margins inside and below the eyes, occasionally one or more placed inside the eye margin. Labrum with +/- 6 hairs.

Eyes: larger in males than females in all species where both sexes have been available for study.

Scutellum: pubescent, without any distinctive features.

Elytra: elliptical/oblong elliptical, finely punctured, shallowly foveate with separation fine/moderate, and pubescent, the pubescence a little shorter than on the pronotum; without any distinctive features.

Meso/metaventral suture: lateral arms not, or only partially visible except in slide preparations when they appear as an apodeme.

Metaventrum: pubescence denser towards the margins, vertex often appearing glabrous because hairs have rubbed off.

Legs: long and thin, without any distinctive features.

Wings: when present of the usual Ptiliid type.

Abdomen: All segments punctured and pubescent. Tergite IX longer than other dorsal segments, Tergite X (pygidium) with no distinctive features in either sex. Ventrite VIII in both sexes with groups of hairs at lateral margins appearing as two pale patches. Male ventrite IX very small and difficult to detect, rounded and with a short, forwardly pointed projection; without any distinctive features. 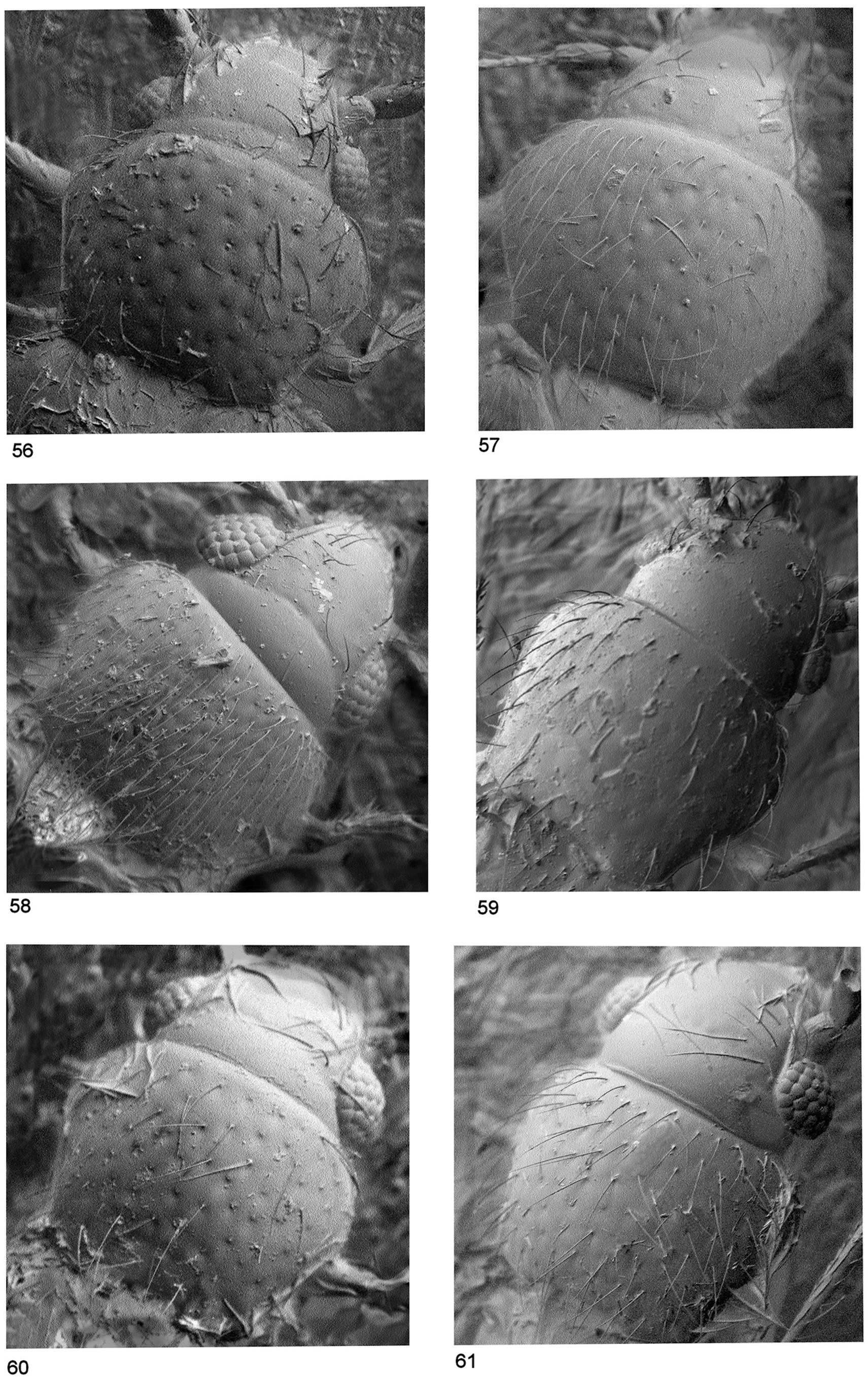 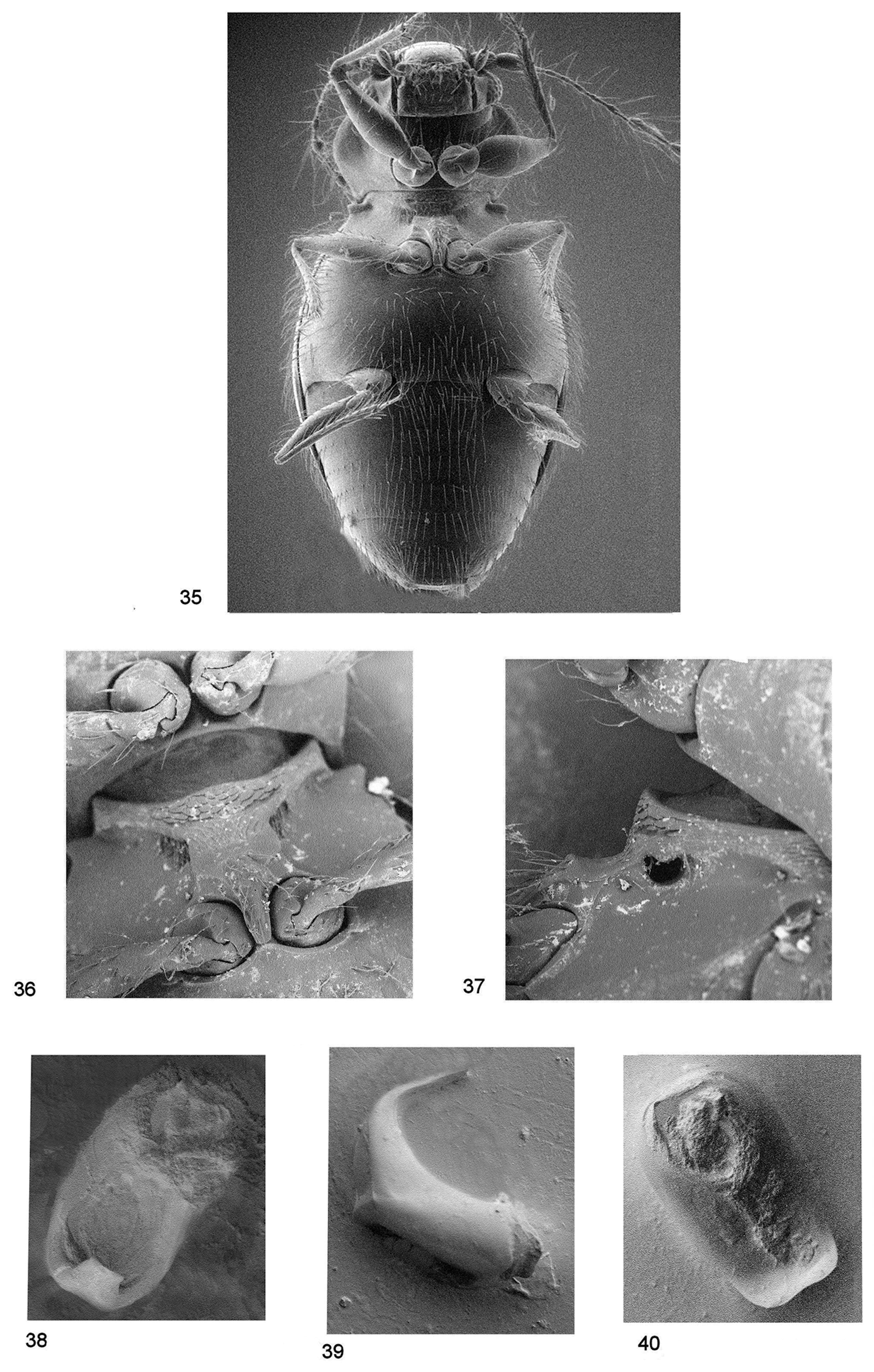