Comments. Pelecinobaccha Shannon  was proposed as a subgenus of Baccha  to hold B. peruviana  , characterized by an elongated abdomen with segments 2–6 of similar length. Hull (1949 a) added B. telescopica ( Curran, 1930)  to the subgenus.

Although many female specimens seem to have a dorso-ventrally flattened 6 th segment ‘ovipositor’ (and sometimes an apical ‘ridge’ sensu Hull, 1949 a  ), this is an artefact of preservation. The 6 th segment can be slightly laterally flattened (natural condition, more easily preserved in females with longer 6 th segments) through to dorsally flattened, even within the same series of specimens. This artefact is most likely due to dehydration of the tissues and collapsing of the sclerite walls, a phenomenon even more common in material pinned straight from alcohol. This effect sometimes also hinders the observation of the shape of some of the abdominal tergites, due to ‘curving’ of the lateral margin.

As mentioned above, the female terminalia of Pelecinobaccha  are very different from other syrphids ( Fig. 10View FIGURE 10 c –f). The 7 th tergite is somewhat shortened and possesses a pair of very long baso-lateral apodemes. The 7 th sternite is modified into a pair of separate lateral rods, partially fused to the tergite laterally and with short ventral apodemes into the 6 th segment, leaving the segment membranous ventrally. The 8 th tergite is modified into a triangular sclerite that is naturally folded longitudinally. The 8 th sternite is usually divided into a pair of lateral lightly sclerotized regions connected by a basal narrow sclerotized bridge and with apicoventral extensions that fold into the segment. It is assumed that the 10 th tergite (epiproct) is either a narrow transverse strip or a pair of sclerites, in either case usually fused to the dorsal margin of the cerci as demonstrated by a distinct thickening of that region on the cercus. The cercus is usually bare with only a single row of pile along its apicoventral margin. The resting condition of the female terminalia is always laterally flattened, and the segments are usually easily extended by light dorso-ventral compression of the 6 th segment in dissections.

It is assumed that the female terminalia is extended by hydraulic pressure of the haemolymph due to dorsoventral compression of the pre-abdominal segments. This is suggested by the presence of massive muscles running from tergite to sternite of the 5 th segment of P. adspersa  ( Fig. 10View FIGURE 10 a). The uniquely long baso-lateral apodemes of the 7 th tergite and the basal crest of the 8 th tergite are most likely used to pull the modified terminalia back into the abdominal cavity.

Species (e.g. P. telescopica  ) with an elongate female 6 th segment also have a relatively elongate male surstylus and hypandrium. In these species the female 2 nd segment is shorter than the same segment in males. 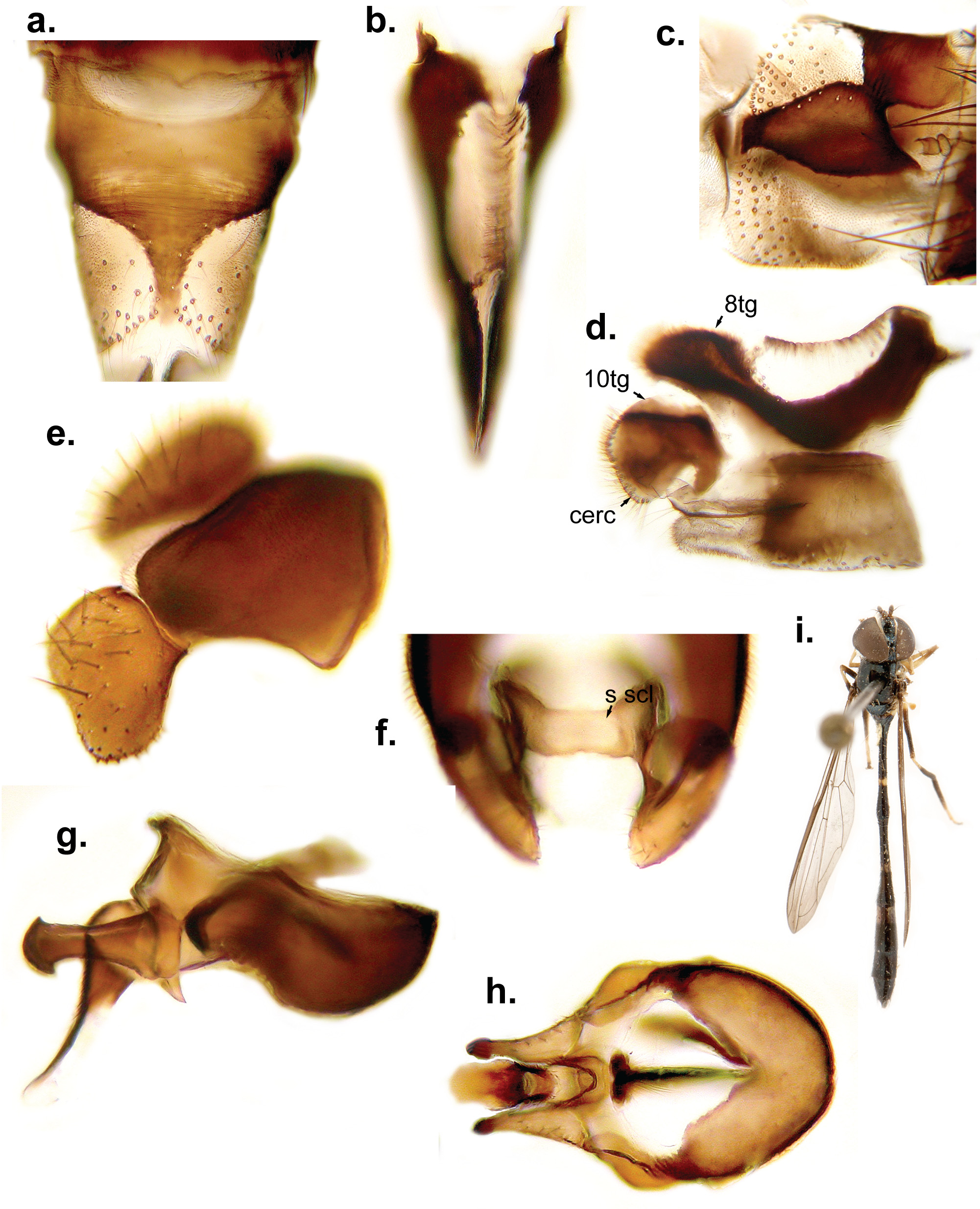 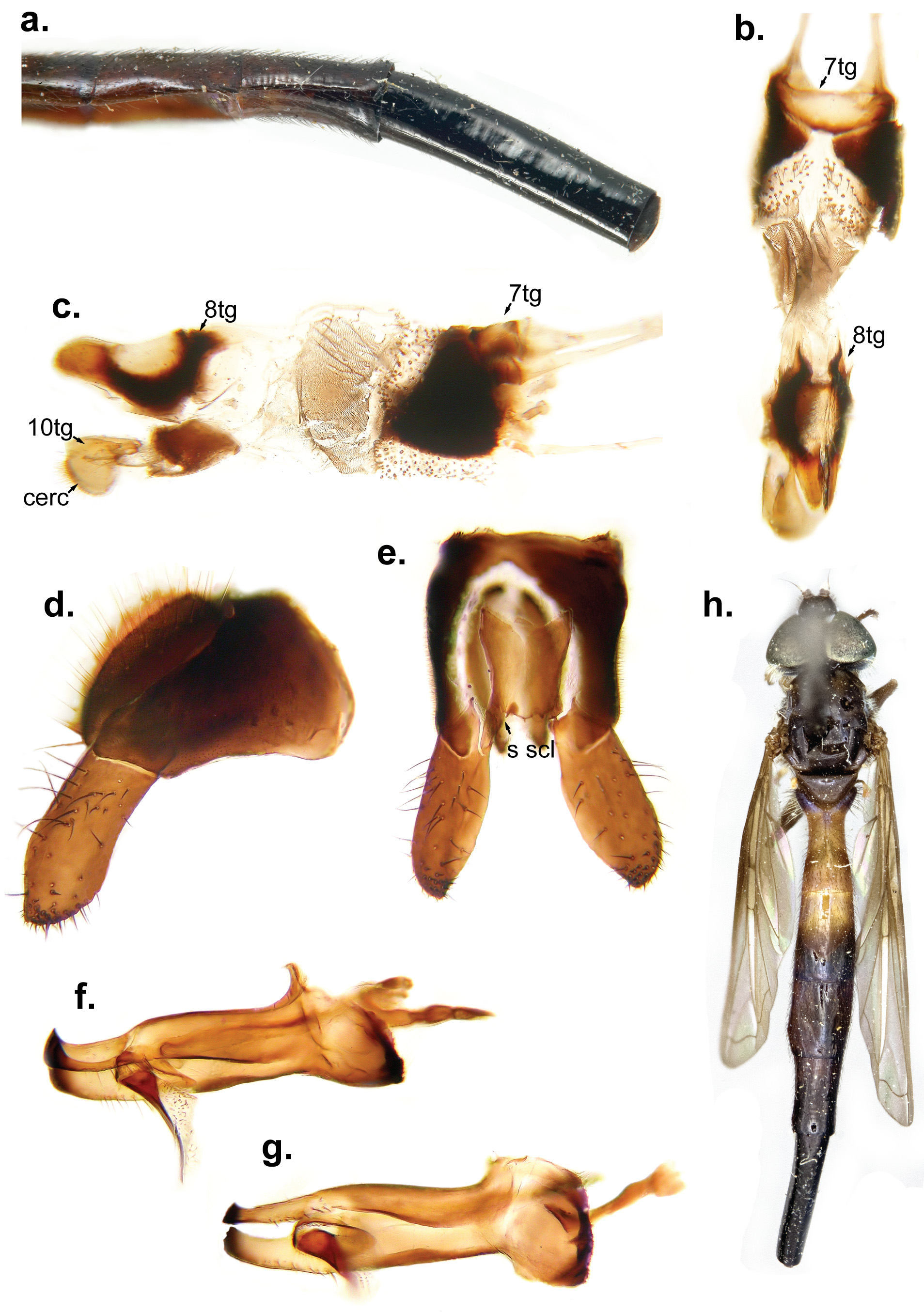 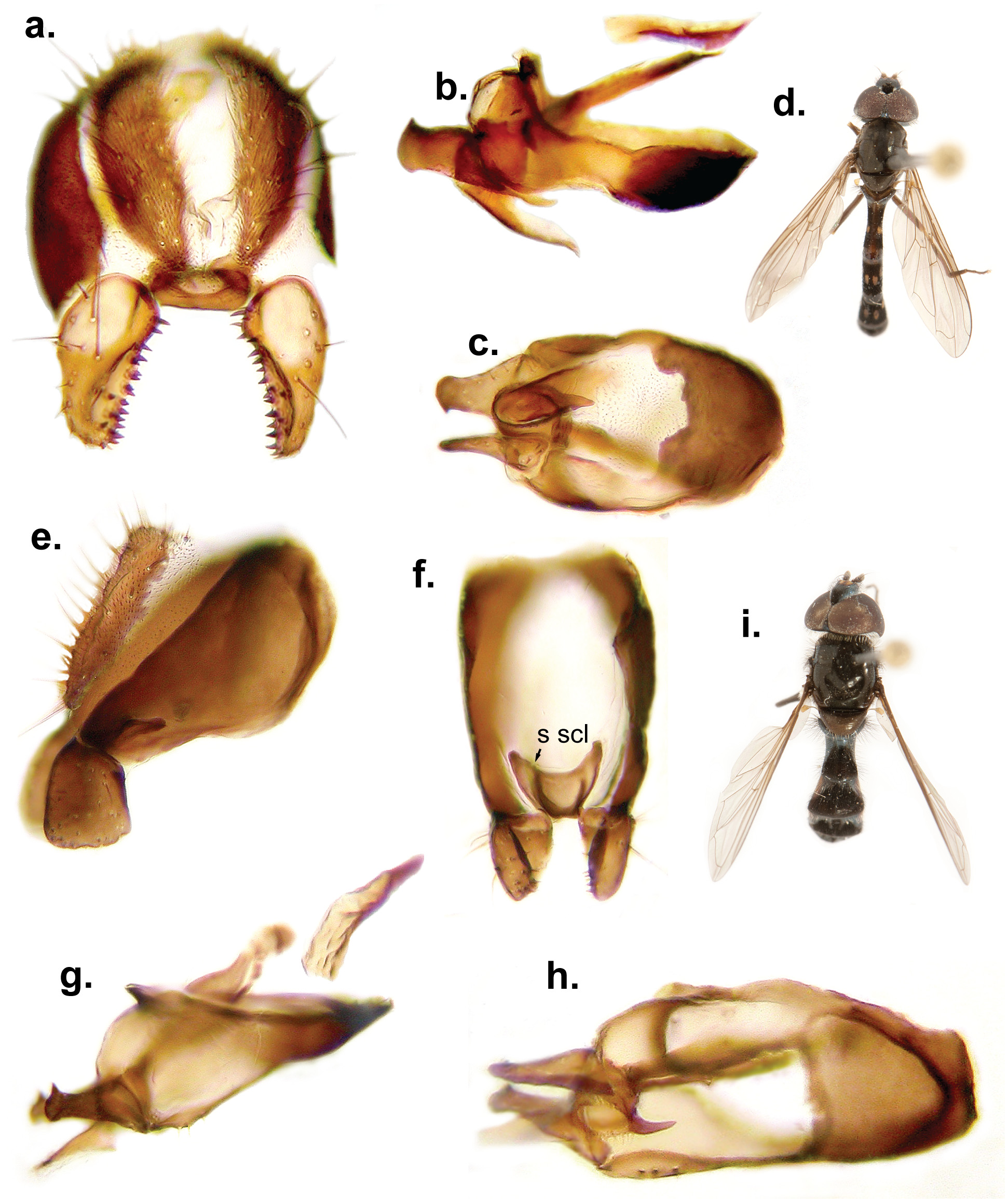