From formosus, Latin, adj. beautiful. Referring to the grace of the sponge.

Dive PL 01,12/06/1989, North Fiji Basin, 16°59.50′S, 173°55.47′W, 1997 m. The sponge, which was tentatively identified in situ by the underwater geologist observer as ‘a kind of gorgonian’, was attached to a fossil chimney with red oxides, on which the density of sessile animals was very low, with only a few euplectellid sponges. The collection site is c. 50–100 m distant from the active site White Lady, a white chimney made of anhydrite emitting transparent hot (285 °C) fluids of low chlorine content, and harbouring a rich animal community ( Auzende et al., 1989; Desbruyères et al., 1994).

Erect, fan-shaped sponge ( Fig. 6 View Figure 6 , 17E View Figure 17 ) consisting of a short stem from which arise branches which divide dichotomously three or four times in a single plane, the last branches being long and parallel. Dimensions in life approximately 8 cm high and 16 cm wide (evaluated from Fig. 17E View Figure 17 ). Holotype at present broken into several fragments, 80 mm high. Fixation base slightly enlarged, attached to a small rocky fragment. Primary stem contorted, smooth, 1 mm in diameter. Secondary branches flattened, bearing short lateral processes regularly arranged perpendicularly on both sides of the branch with a regular spacing of 0.5 mm. Tertiary branches similar to the secondary ones, but up to 45 mm long and 0.4–0.5 mm in diameter, covered by lateral processes regularly arranged on both sides, facing each other and 250–300 µm apart. Most lateral processes only 100–125 µm long, most probably broken, a few of them extending in a filament 2.5–3.7 mm long lying parallel to the branch ( Fig. 7E View Figure 7 ). A flattened enlargement present at each point where the branches divide dichotomously, containing numerous oocytes or embryos ( Fig. 7A–D, F View Figure 7 ). No visible aquiferous system, no visible aperture. Living tissue poorly represented in the present state of preservation, except at the branching points. Consistency rather rigid, but highly fragile. Colour pure white.

Skeleton: Stem and branches with an axis of large fusiform styles mixed with a few substrongyles especially near the base, covered on the lateral side of the flattened branches by a dense cover of microstrongyles, less developed on the enlarged side of the branches. Lateral processes with an axis of small styles, inserted on the main axis by an enlarged base and arising through the lateral cover of microstrongyles. Enlargements at the division points with on both sides a cover of fusiform styles and substrongyles parallel to the surface and pressed against each other, a dense feltwork of microstrongyles, and a palisade of slender styles of the same type as those of the axis of lateral processes on the edge ( Fig. 7A, B View Figure 7 ). Base of the stem with a cover of numerous microtylostyles of a particular type, themselves covered by an external layer of short fusiform styles and substrongyles. Anisochelae dispersed on the branches, with no visible special arrangement except anisochelae 1, which are grouped in rosettes.

Embryos ( Fig. 7A–D, F View Figure 7 ) numerous in every enlargement at branching points, each in a cavity surrounded by microstrongyles, 180–300 µm in diameter, showing various stages of development, most containing spicules as usual in embryos of Asbestopluma ( Lundbeck, 1905) . Earliest stages spherical, without spicules, made of blastomeres 20–22 µm in diameter filled with large vitelline inclusions and with a large nucleolated nucleus. In a probably more advanced stage, blastomeres more elongated and radially arranged near the border. Later stages made of poorly distinct cells, including a few layers of small cells near the surface, with a central fascicle of styles varying from 1 to 4 µm in thickness, to which are added in probably more advanced stages numerous rosettes of anisochelae 2.

2. Substrongyles of the axis ( Fig. 8C View Figure 8 ), more numerous and smaller near the base, curved near the middle, sometimes double bent or even a little flexuous, with the two ends nearly equal. Size 80–500 × 15–30 µm.

4. Microtylostyles ( Fig. 8F View Figure 8 ) present only at the base where they are numerous, very peculiar in shape, resembling the ‘spear-like’ spicules figured by Ridley & Dendy (1887) for Meliiderma stipitata and by Topsent (1929) for Helophloeina stylivarians , with a round head, a short neck, an enlarged cylindrical body and a long point, the whole spicule covered by minute spines 0.1 µm high more numerous on the enlarged ‘body’. Size 25–45 × 4–7 µm.

5. Anisochelae 1 ( Fig. 8E View Figure 8 ), grouped in rosettes with lateral alae attached to the shaft along most of their length. Frontal ala of the foot either simple or bifid. Size 72–90 µm, shaft diameter 5–5.5 µm.

Like all these deep-sea sponges, the specimen is fragile, although the branches are rigid, and the holotype is at present broken into several fragments. Very likely the lateral processes are the remains of a welldeveloped system of long filaments which have been broken at their base except in a few places, as shown in Figure 7E View Figure 7 . These filaments appear to be more numerous on a photograph taken soon after collection. Unfortunately, there is no available high- definition in situ picture of the sponge. However, a low-definition video document taken during collection of the specimen shows that there is between the branches a regular arrangement of thin filaments ( Fig. 17E View Figure 17 ). This morphology as well as the absence of a visible aquiferous system suggest a carnivorous feeding habit.

The sponge shows evident affinities with Asbestopluma in its erect shape, absence of aquiferous system and presence of anisochelae. However, it differs from other representatives of the genus in the gorgonian-like shape, the localization of the embryos, the presence of spear-shaped microscleres at the base, and the grouping in rosettes of the anisochelae. The particular microtylostyles of the base have a unique shape. There are only two other sponges with somewhat similar spicules, Meliiderma stipitata (Ridley & Dendy, 1886) and Helophloeina stylivarians Topsent, 1929 , both with cladorhizid affinities. In Meliiderma Ridley & Dendy, 1887 , which has anchorate isochelae, the spear-shaped spicules are clearly larger, although tentatively regarded as microscleres by Ridley & Dendy, and are packed in a single layer along the stem. This sponge has been returned by Hajdu & Vacelet (2002) to the genus Chondrocladia where it had originally been described and Meliiderma is rightly considered a synonym of Chondrocladia . The resemblances are greater with Helophloeina stylivarians , from the deep south-east North Atlantic (Canary Islands). This sponge, which has anisochelae of the Asbestopluma type, differs from the present species in shape (poorly known in the single known specimen), in the presence of desmas and a mixture of styles and oxeas, and in the smaller size of the microtylostyles. However, the two sponges, which have evident affinities with Asbestopluma , share two characters not found in the other species of the genus, i.e. the presence of microstrongyles and a sheath of spear-shaped microtylostyles. Helophloeina has been considered a synonym of Asbestopluma by Hajdu & Vacelet (2002), on the basis of the fact that there was a single species with these characters in the genus. I suggest reconsidering this position, as there are now two species sharing these characters, and reviving Helophloeina either as a genus within the Cladorhizidae or preferably as a subgenus of Asbestopluma with an emended diagnosis.

In A. (H.) formosa sp. nov., the grouping of the anisochelae in rosettes, which has not been reported in any other Asbestopluma , interestingly emphasizes the affinities of the genus with the Mycalidae , and more precisely Mycale Gray, 1867 , already shown by the presence of palmate anisochelae and already emphasized for instance by Lundbeck (1905). However, the transfer of the genus to Mycalidae is not proposed here, pending more solid data that will allow a general reassignment of all the members of the evidently polyphyletic Cladorhizidae (see Discussion). 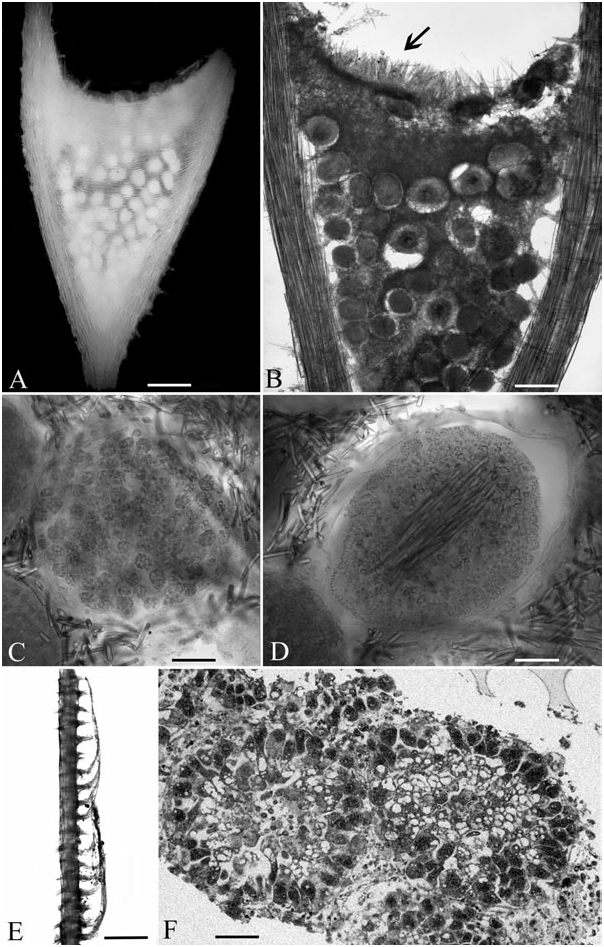