Remarks. The Gekko japonicus  group is very complex. Different morphological features of the species of this group (e. g., nares in contact with rostral or not, broad webbing between fingers and toes or not, dorsal tubercles absent or present, tubercles on limbs absent or present, see Table 2) demonstrate that this genetically well-defined clade is highly morphologically variable (see Figure 1View FIGURE 1).

Numerous authors have listed Gekko chinensis  as a representative of Vietnam’s herpetofauna (e.g., Bourret 1937 b, 1940 a, 1943; Zhao & Adler 1993; Welch 1994; Bobrov 1995 a; Rösler et al. 2005). According to Nguyen et al. (2005), G. chinensis  is widely distributed in the north of the country, whereas G. palmatus  is only recorded from the two northern provinces of Lang Son and Vinh Phuc (see also Nguyen & Ho 1996). However, according to Ziegler et al. (2006) and based on new locality records (see Appendix 1) the distribution of G. palmatus  in Vietnam in fact extends from several northern provinces southward to central Vietnam in Quang Binh Province. Taking into account the records given for G. c h i n e n s i s by Nguyen & Ho (1996), the latter species must occur in sympatry with G. palmatus  at least in the northern Vietnamese provinces of Bac Giang, Bac Kan, Cao Bang, Lang Son, Quang Ninh, and Vinh Phuc. However, all Gekko  studied by us from these provinces proved to be G. palmatus  and none had the diagnostic characters of G. c h i n e n s i s. This also makes the records of G. chinensis  from Hai Duong and Ninh Binh provinces (see Nguyen & Ho 1996) questionable and they are probably based on misidentifications of G. palmatus  . Bobrov & Semenov (2008) listed all previous identifications of G. chinensis  from Vietnam as G. palmatus  . Ota et al. (1995) believed G. c h i n e n s i s and G. palmatus  to represent allopatric taxa (see also Matsui & Ota 1995). Concordant with the latter authors we herein suggest that the known occurrence of G. chinensis  is limited to China (southern provinces of Fujian, Guangdong, Guangxi, Guizhou, Hong Kong, Sichuan, and Yunnan) whereas that of G. palmatus  is only in northern and central Vietnam (Bac Giang, Bac Kan, Cao Bang, Hai Duong, Hai Phong, Lang Son, Ninh Binh, Quang Binh, Quang Ninh, and Vinh Phuc provinces). Further collections or study of museum specimens are needed to clarify the identification of populations along the China-Vietnam border and whether G. chinensis  and G. palmatus  occur in sympatry.

The distinguishing character of broad toe webbing in G. palmatus  versus a narrower webbing in G. c h i n e n s i s, which can regularly be found in the older literature (e.g., Boulenger 1907; Smith 1935; Bourret 1937 b), may have conspicuously added to the above listed confusion and misidentifications, because it represents an ambiguous diagnostic character (Ota et al. 1995). Smith (1935: 114) even concluded that G. palmatus  is “possibly a racial form of G. c h i n e n s i s.” However, G. palmatus  and G. chinensis  can be easily distinguished by the size of the internasals compared to the nasorostrals (internasals same size or larger than nasorostrals in G. chinensis  versus always smaller in G. palmatus  ) and statistically significant differences in the number of midbody scales and the number of lamellae on the first, third and fifth fingers as well as the first toe (Ota et al. 1995). A key character that allows for proper identification of both aforementioned species is the presence of limb tubercles. These are present in G. c h i n e n s i s, but are completely lacking in G. palmatus  (our data). Ota et al. (1995) indicated shank tubercles for G. chinensis  and the specimen depicted in Zhao & Adler (1993: pl. 21, fig. G.) has tubercles both on the fore and hind limbs; but the specimen of G. palmatus  depicted by Nguyen et al. (2009: fig. 314) completely lacks such tubercles.

The taxonomic history of G. similignum  is controversial. The type locality of this taxon is Hainan Island ( Smith 1923). Stejneger (1932) synonymized G. similignum  with G. chinensis  (see also Zhao et al. 1999). However, Ota et al. (1995) and Kluge (2001) listed it as valid at the specific rank. Gekko chinensis  and G. smilignum  differ in maximum SVL, in the number of scales around midbody and in the number of lamellae on the first and fourth toes (see Table 1).

Zhao & Adler (1993) synonymized G. scabridus  with G. chinensis  (see also Kluge 2001), but Matsui & Ota (1995) and Zhao et al. (1999) again evaluated the former taxon as valid species. Liu & Zhou (1982) pointed to the phenotypic similarity between G. scabridus  and G. japonicus  . According to Liu & Zhou (1982), G. scabridus  differs from G. japonicus  by having tubercles on its back and hind limbs and by a higher count of precloacal pores. From Table 1 it is obvious that there exist additional distinguishing features between the two species. Compared with G.

japonicus  , G. scabridus  has fewer interorbitals (30 versus 32–35), fewer lamellae below the first toe (6–9 versus 10–12), and fourth toe (7–9 versus 14–16), more dorsal tubercle rows (17–21 versus 9–14) and a higher number of precloacal pores (10–15 versus 6–9). In comparsion to G. chinensis  it has only slightly developed webbing between the fingers and toes, fewer precloacal pores, and more postcloacal tubercles. We, therefore, accept the specific status of G. scabridus  and regard it as a valid member of the Gekko japonicus  group.

With respect to G. subpalmatus  it is interesting to note that the back of the holotype is slightly banded and that the vertebral region shows four indistinct light blotches (Rösler et al. 2005: figs. 11–12). However, the ground coloration of the live specimen depicted in Zhao & Adler (1993: their Pl. 32, fig. B) is blackish-olive (Black 3 U). This specimen, in addition, has a repeatedly interrupted orange (722 U) vertebral stripe and tail blotches of the same color; a banded pattern as observable from the holotype is not discernible (see also fig. in Huang & Zong 1998: pl. 29). Whether this reflects intraspecific variation or a persistent confusion over the identity of this species remains to be investigated. FIGURE 3. Map of East and Southeast Asia and the Indo-Australian Archipelago showing the approximate distribution of (A) the Gekko japonicus, G. petricolus, and G. monarchus groups and G. a t h y m u s and (B) the G. g e c k o, G. p o ro s u s, and G. vittatus groups and G. vietnamensis. 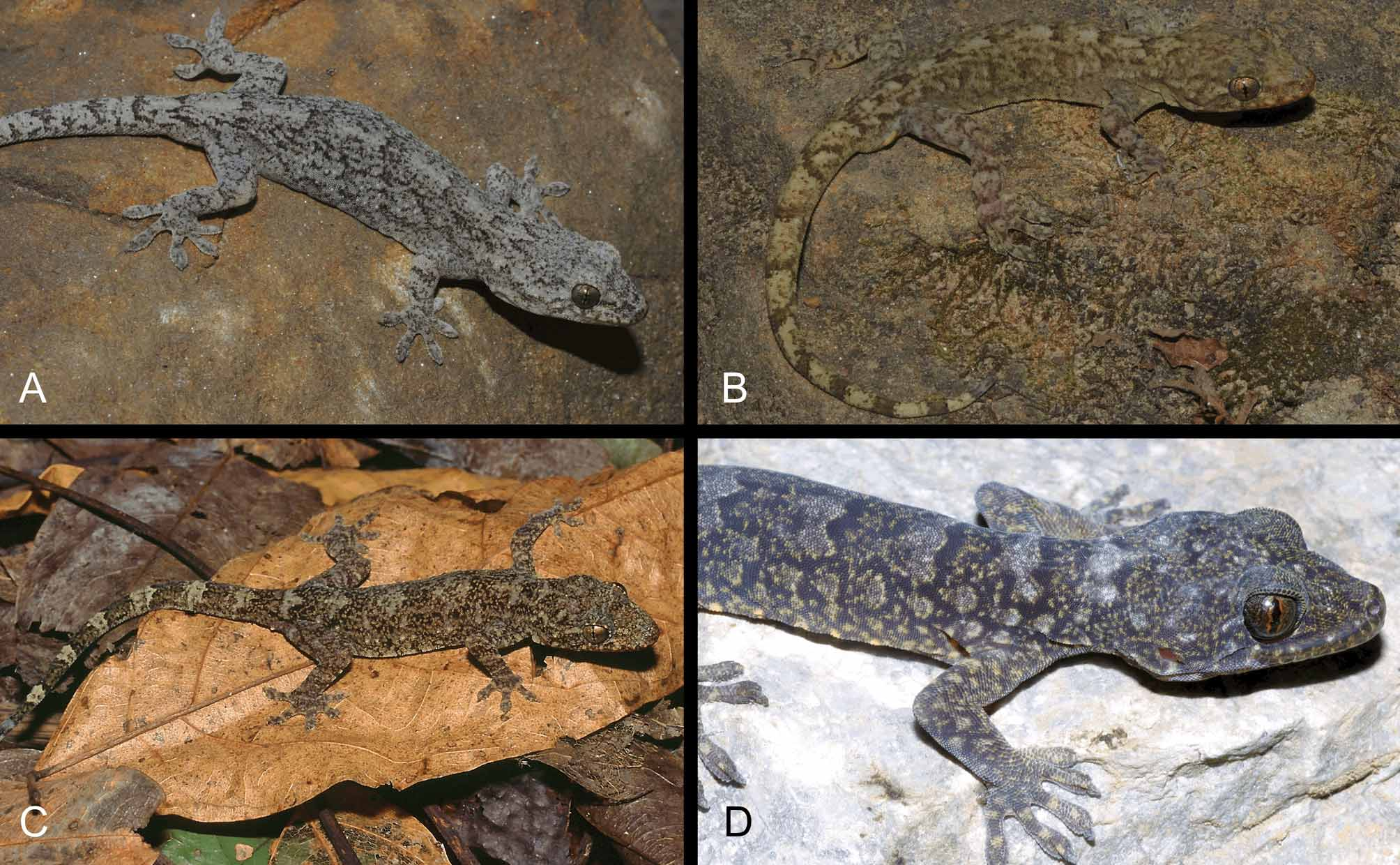