Diagnosis: This species can be separated from its Indian congeners by its medium-large size, uniform yellow-orange body, small scutellum, epipleuron at its widest almost half as wide as metaventrite, and the distinctive male genitalia. It is similar to two other Oriental species, Micraspis quichauensis ( Hoàng, 1982)  (from China and Vietnam) and M. yunnanensis Jing (1985)  (from China) in having broadly explanate elytral margins, but the latter two have a much more strongly convex and almost hemispherical body outline, a pronotum with a posterior black border, and the elytra have reddish discal markings with the suture and lateral margins bordered black, and the male genitalia differ as follows. In M. yunnanensis  , the penis guide of the tegmen is progressively narrowed along its entire length in ventral view and in lateral view, it is distinctly curved and much narrower in the posterior half. In M. quichauensis  too, the penis guide of the tegmen is posteriorly distinctly narrowed and curved in lateral view and the inner process of penis capsule is shorter than outer process (in M. unicus  sp. n., penis guide is cylindrical and subparallel for nearly four-fifths of its length and in lateral view, it is not apically curved; the penis has a more elongate capsule and a narrower, pointed apex). The spermatheca of female genitalia in M. unicus  has a robust cornu and an elongate, tubular ramus, but in M. quichauensis  , the cornu of spermatheca is regularly curved with a much shorter ramus.

Etymology: The specific epithet is a Latin adjective and refers to the unique / singular features of this species such as unusually broad epipleuron and the male genitalia, which stand out from other Indian and Oriental Micraspis  spp.

Taxonomic notes: This species is related to Micraspis quichauensis ( Hoàng, 1982)  and Micraspis yunnanensis Jing, 1985  in having outwardly flat elytra. Specimens of these two species could not be examined and the differential diagnosis given here is based on the descriptions and illustrations provided by Hoàng (1982), Yu (2010), and Ren et al. (2009). The male genitalia of M. unicus  sp. n. are closer to those of M. quichauensis  and to a lesser degree, to M. yunnanensis  , but the shape of the penis guide and penis apex illustrated by Hoàng (1982) and Ren et al. (2009) for the latter two species are different. The spermatheca of the female genitalia in M. quichauensis  is also different from that of M. unicus  in having a regularly curved, less robust cornu and a shorter ramus. Micraspis quichauensis  was originally described as Mononeda quichauensis Hoàng, 1982  from Quichau, Vietnam, who subsequently also noted that it was close to Micraspis  and established a new subgenus Mononeda (Paramicraspis) Hoàng, 1983  to place this species ( Hoàng 1983). Mononeda Crotch 1874  , a South American genus, has little in common with this species except for its explanate elytral margins and differs in having a much wider scutellum. Yu (2010) transferred Mononeda quichauensis  to Micraspis  and provided the habitus illustrations of both M. yunnanensis  and M. quichauensis  . Ren et al. (2009) illustrated the habitus and male genitalia of M. yunnanensis  . 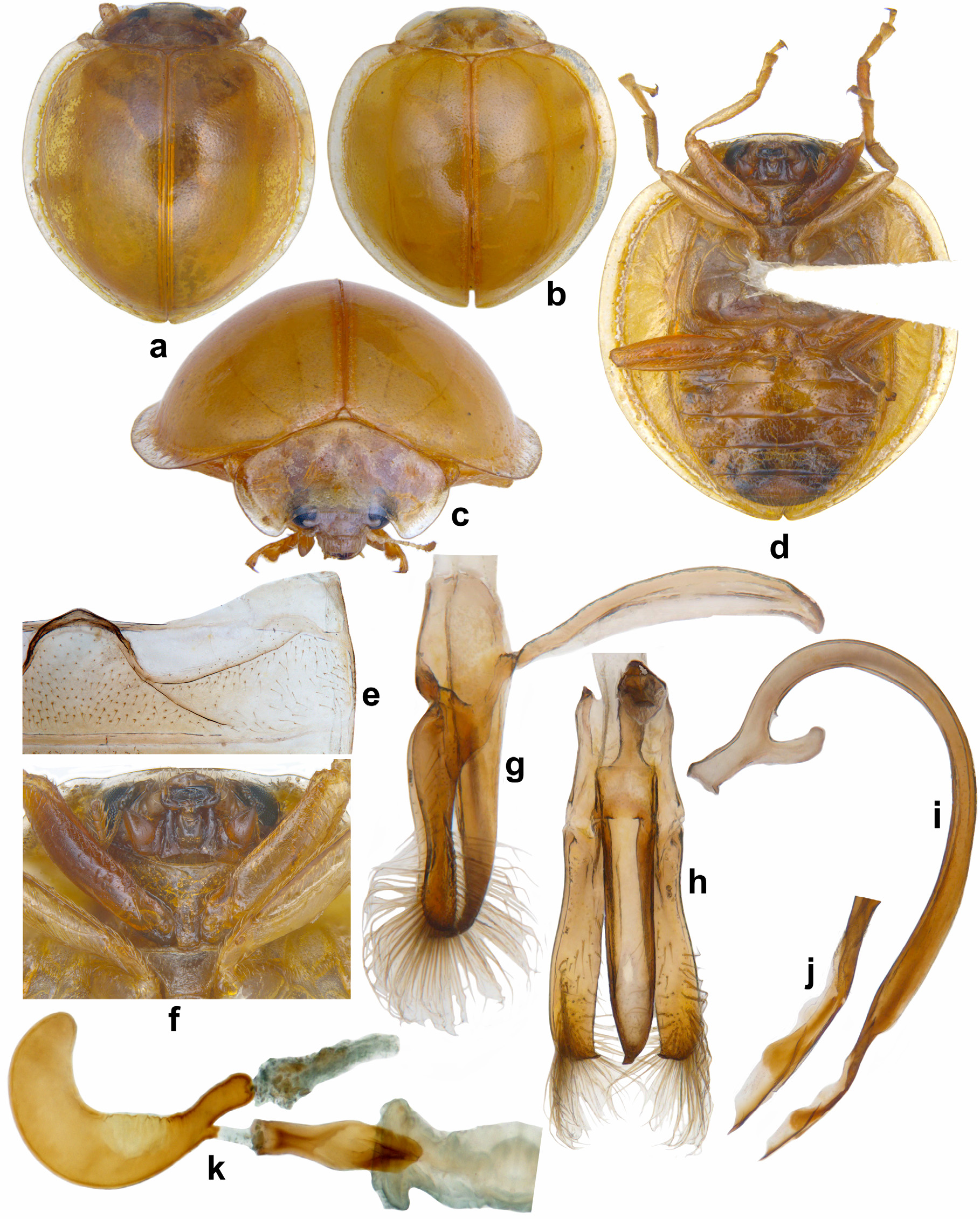