Sinetectula gen. nov. is derived from the Latin ‘ sine ’, meaning ‘without’ in combination with ‘ tectula ’, meaning ‘little roof’, or, in other words, ‘little homeless’. This also conjures up the contrast with the appearance of these small shelled gastropods that have, in reality, their home always with them. It also conjures up the contradiction that appears by virtue of the etymology by turning the ‘little homeless’ into ‘not homeless’, now that the name comes into existence.

We did not study Tritonidea castanea Melvill, 1912 from the Persian Gulf or Pisania townsendi Melvill, 1918 from Pakistan, two species that share characteristics with Sinetectula gen. nov.

the parietal part of the columella, much broader and fewer spiral cords with much narrower interspaces, fewer and much broader axial ribs, and a straight or weakly convex (rather than convex) outer lip.

The genus Engina differs from Sinetectula gen. nov. in its fewer but usually more prominent axial ribs, the usually stronger apertural sculpture with prominent knobs within the outer lip and radially orientated lirae on the columellar callus (instead of knobs). The radula of Engina turbinella Kiener, 1836 , the type species of Engina (originally cited as Engina zonata Gray, 1839 ), looks similar to the radula of Sinetectula egregia gen. et comb. nov. but differs by the presence of 5 pronounced cusps on the rachidian tooth ( Ponder 1972: 252, fig. 1–10).

The American genus Monostiolum differs from Sinetectula gen. nov. in its axial sculpture reduced or absent on the last whorl, the weak apertural sculpture, and the absence of lirae within the outer lip. The spiral sculpture tends to be much finer in Monostiolum, and the spire is typically much higher, making for a slenderer shell ( Watters 2009: 259–265, figs 197–223).

The East African genus Micrologus Fraussen & Rosado, 2011 looks very similar in shape but differs from Sinetectula gen. nov. in its finer spiral sculpture with broader interspaces and a higher amount of secondary spiral cords (especially on the base and the transition to the siphonal canal), the much narrower columellar callus, the absence of knobs or lirae on the columellar callus and the absence of a serrated edge along the outer lip ( Fraussen & Rosado 2011: 76–78, figs 1–6).

The West Pacific genus Cancellopollia Vermeij & Bouchet, 1998 looks similar but differs from Sinetectula gen. nov. in its smooth columellar callus, the stronger spiral sculpture without secondary spiral cords, the absence of a strong (bicarinate) subsutural cord and the stronger varix on the outer lip ( Vermeij & Bouchet 1998: 479).

The genus Pisania Bivona, 1832 differs from Sinetectula gen. nov. in its much smoother, usually glossy shell wihout axial sculpture and the smoother aperture. The radula of Pisania striata (Gmelin, 1791) , its type species (originally cited as Pisania striatula Bivona & Bernardi, 1832 ), looks similar to the radula of Sinetectula egregia gen. et comb. nov. but differs by the presence of 5 more pronounced cusps on the rachidian tooth, the slightly shorter outer cusp on the lateral teeth and the absence of a protrusion at the inner margin of its base ( Cernohorsky 1971: 138, fig. 17; Ponder 1972: 260, fig. 1-1).

As with the variation in protoconch morphology, shape and sculpture also vary quite considerably among species of Sinetectula gen. nov. This is not unusual within Pisaniidae , or Buccinidae Rafinesque, 1815 in the broad sense. Indeed, Sinetectula gen. nov. has a somewhat heterogenous appearance. The shape varies among the species, with an ovate shape of S. farinosa gen. et comb. nov., in contrast with the slender shape of S. egregia gen. et comb. nov. and others. The shape varies also within a single species, with slender and broad specimens occurring within, for example, S. cinis gen. et comb. nov. (according to their distribution, the broader ones from Galapagos, while the more slender ones usually from Costa Rica) and S. shepstonensis gen. et comb. nov. (the limited material we studied suggests a variation according to bathymetric distribution, if not latitudinal distribution: the slender ones from deeper water off Somalia, while the broad ones are from shallower water off Mozambique and South Africa). The convexity of the whorls is stable in all species except S. shepstonensis gen. et comb. nov., where the specimens with a broader shell have a more convex whorl compared to the slenderer specimens from deeper water. The sculpture is moderately constant within a single species. As a result, the differences between the species can be described in the strength of the spiral cords and the axial ribs as well as in their number.

Both Sinetectula farinosa gen. et comb. nov. and S. egregia gen. et comb. nov. have a wide range, reaching from eastern Africa to the Marshall Islands. These two species may have a similar mode of life, what is also reflected in the fact that both are syntopic at Kwajalein Atoll and in Western Samoa.

Sinetectula gen. nov. is so far not known from the fossil record. In the case of S. cinis gen. et comb. nov. and S. nigricostata gen. et comb. nov. it is likely that they, or their immediate ancestors, arrived in the eastern Pacific from the west no later than the Early Pleistocene ( Vermeij 1987). 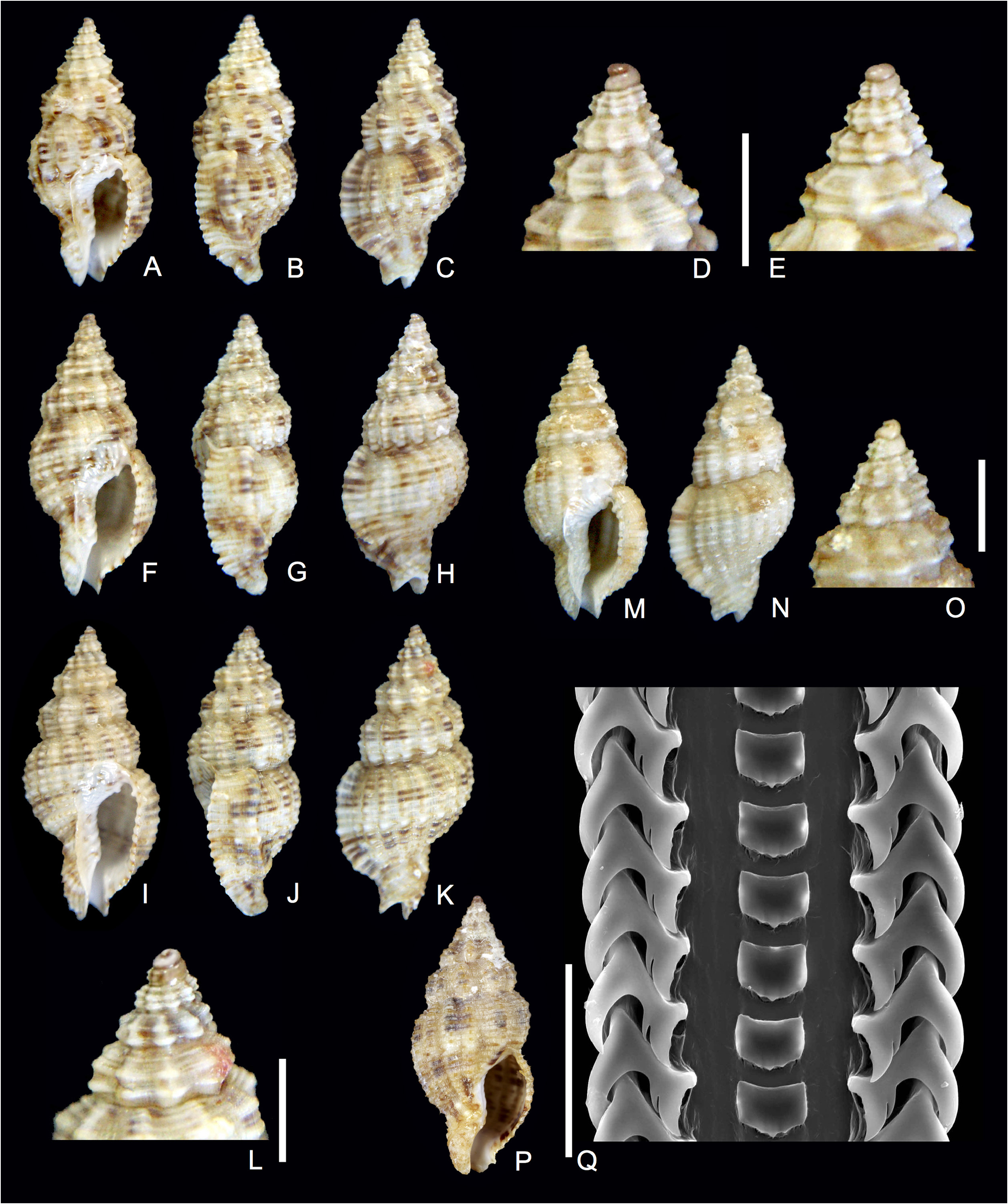