Description. Colonies erect, sympodial, frequently branching, with first and second-order branches, from 5 to 14mm high. Main stem monosiphonic, divided in nodes and internodes 593.9 μm long, slightly curved on distal branches but usually straight on the base of main stem and branches. Internodes with three to five annulations at base and distal apophysis alternately given off the hydrothecal pedicel or branches. Hydrothecal pedicels usually short but occasionally long, especially at the base of the colony (270.3–483.2 μm long), with 10 to 12 annulations throughout. Hydrothecae 1.3–1.9x higher than wider, 316.8 μm long, 207.6 μm wide at margin, tapering towards the base (85.6 μm wide at diaphragm). Margin of hydrothecae slightly waived or with fine longitudinal folds. Hy- drothecal diaphragm straight to slightly oblique. Gonothecae elongated and slender, 540.0 μm long and 144.4 μm in maximum diameter, with a short distal neck or round at top, arising from the axis of the main stem and hydrothecal pedicels or branches. Gonothecae pedicels short and slender (110.17 μm long), with 5–6 annulations throughout.

Remarks. The species O. tenuis   was described by Fraser (1938a) for the eastern Pacific, with records from Ecuador and Mexico, but it has been for long considered a synonym of Obelia dichotoma ( Linnaeus, 1758)   ( Cornelius 1982, 1995; Calder 1991a). After examining the paralectotype material of Fraser’s species (USNM 49309), we concluded that our specimens agree with O. tenuis   in having longer hydrothecae, as well as slender gonothecae. Besides, their hydrothecae are longer than specimens we assigned to O. dichotoma   , and they also have a narrower base ( Table 2). The shape of the gonothecae is also distinctive, with O. tenuis   having slender gonothecae, which are often round on top and lack a distal neck ( Figs. 10C, F, I View FIGURE 10 , Table 2). Finally, Fraser (1938a) described round cusps with longitudinal lines in the margin of the hydrotheca of O. tenuis   . This character was not seen in the paralectotype, although slight waves and fine longitudinal folds were detected. These are in agreement with our specimens assigned to O. tenuis   , as opposed to the even margin of the specimens we assigned to O. dichotoma   (compare Figs. 9H View FIGURE 9 and 10H View FIGURE 10 ). All these pieces of evidence, added to the fact that O. dichotoma ( Linnaeus, 1758)   is a species complex ( Cunha et al. 2017), are consistent with the consideration of Obelia tenuis Fraser (1938a)   as a valid species. Investigation of genetic material from this species is desirable and will undoubtedly contribute to is delimitation and ascertain its independence as a molecular lineage. 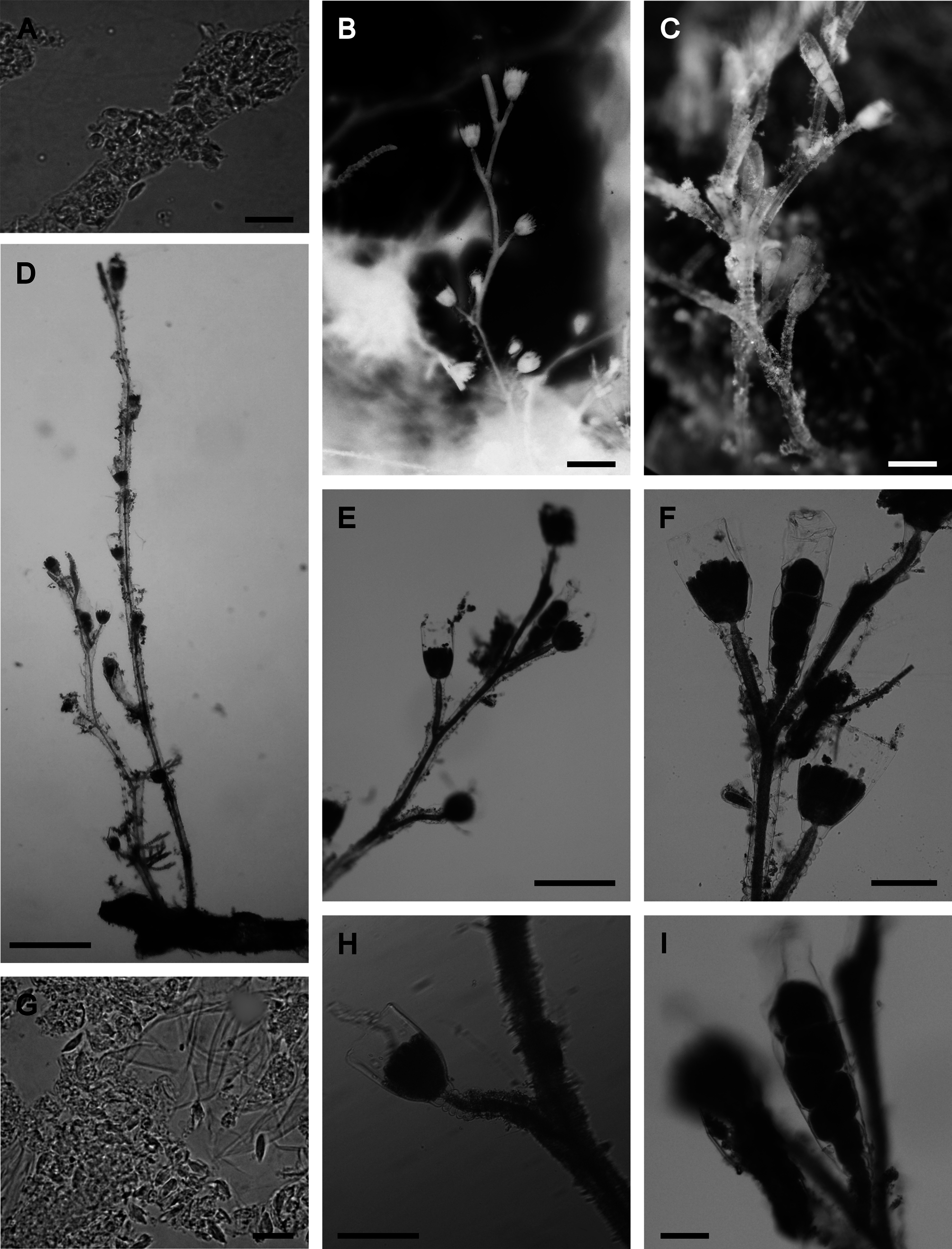