Description. Colonies erect, from 12 to 115 mm high, with creeping hydrorhiza. Hydrocaulus brown, monosiphonic, perisarc thick (17.8–38.4 µm wide), divided into regular internodes (503.8–568.7 µm long) by transverse nodes (289.6–306.3 µm wide). Each internode with a laterally and short hydrocladial apophysis (171.7–183.7 µm long), as well as three nematothecae (107.5–124.3 µm long), one inferior and two axillary. Hydrocladia short (1.8–2.9 mm long), white, alternate, unbranched, and divided by distinct nearly transverse nodes into internodes (103.5–149.4 µm long). Hydrocladial internodes with one frontally placed hydrotheca, with one median inferior short nematotheca (225.0– 255.3 µm long) and two lateral nematothecae (123.3–127.2 µm high) curved above the margin of the hydrotheca; two well-marked internodal septa, one at the base of hydrotheca (132.6–150.8 µm long) and another at the base of lateral nematothecae (75.3–91.1 µm long). Hydrothecae close from one another, 199.1– 233.9 µm deep from the tip of median abcauline cusp to base, deeply cone-shaped, axis just slightly convex, adnate to hydrocladial internode; abcauline wall convex basally and slightly concave distally from median inferior nematotheca to the margin; abcauline wall with a thick carina (6.8–10.2 µm wide). Hydrothecal aperture 178.2–290.9 µm wide, outline nearly round, except for flattened part adnate to internode; margin with nine marginal cusps; median abcauline cusp shorter than the others, four lateral pairs nearly equal in size; all cusps acute and separated by Ushaped incisions. Corbula pod-shaped (2.5 mm long, 1.0 mm wide), red, with gonangia, borne on peduncles with a single cormidium; each gonangia arising from rachis and extending to nematocladia in the interior of corbula. Either side of rachis with ten partially fused nematocladia, each with a row of nematothecae.

Remarks. Fraser (1938a, b, c, 1948) described and/or registered several species of the genus Aglophenia Lamouroux, 1812   for the Mexican Pacific ( Calder et al. 2009), four of which occur in La Paz Bay and surrounding areas ( Aglaophenia diegensis Torrey, 1902   ; Aglaophenia longicarpa Fraser, 1938b   ; Aglaophenia pinguis Fraser, 1938b   ; and Aglaophenia propinqua Fraser, 1938b   ) ( Table 1). However, detailed information on characters of the colony is not available for most of these species, especially size measures for comparison. Calder et al. (2009) designated lectotypes for all Fraser’s species from the Allan Hancock Pacific and Caribbean Sea expeditions, and although general pictures of the colonies were provided, a detailed study and comparison of the type specimens is desirable and would contribute to their delimitation.

As our specimens agree with one or more of the literature descriptions ( Table 1), we are not able to confidently assign our material to any of these species until their type materials are studied in detail. However, A. propinqua   have been suggested by Calder et al. (2009) to be a member of Cladocarpus Allman, 1874   or Streptocaulus Allman, 1883   because of the presence of two blunt cusps on the rim of hydrotheca separated by a long embayment, a character that is not clear from the original description of the species ( Fraser 1938b). Similarly, the size of the corbulae of A. longicarpa   seems to be distinctive, but this measure is not available for the other species ( Table 1, Fraser 1938b; Calder et al. 2009). Considering the shape of hydrotheca and hydrothecal cusps, our specimens closely agree with A. pinguis   , but this is the only species with four cauline nematothecae, a character that is not illustrated in the original description ( Fraser, 1938b, Table 1).

Distribution. Species of the genus Aglaophenia   have been registered in several localities along the Mexican Pacific ( Fraser 1938a, b, c, 1948; Calder et al. 2009). Among the species with records on the east coast of Baja California Sur, A. diegensis   , A. longicarpa   , and A. pinguis   occur in La Paz Bay (Espiritu Santo Island) ( Table 1). 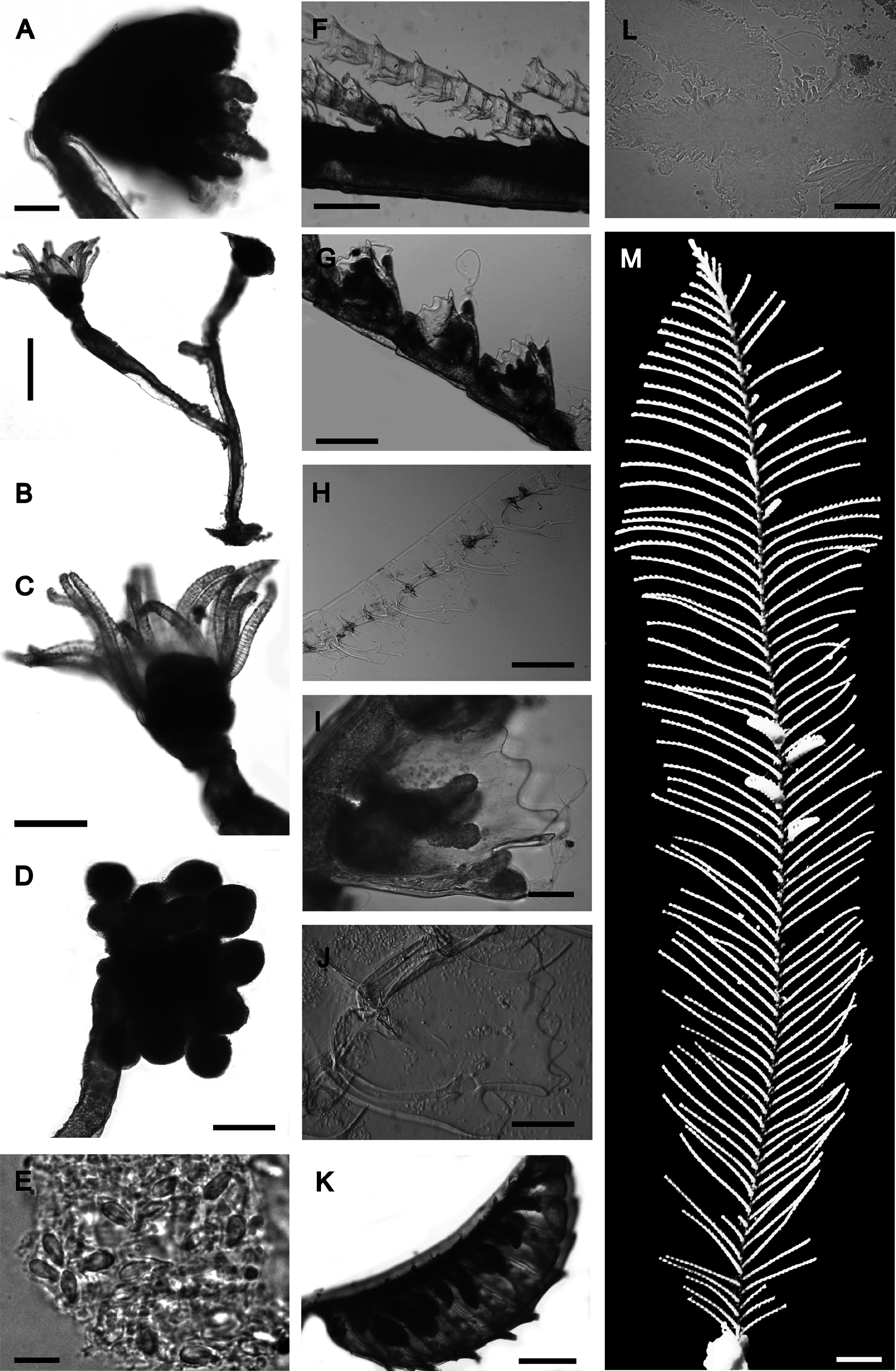