Diagnosis. A small-sized species with small eyes; it can be distinguished from other similar taxa by a combination of these characters: (1) setose peduncular and flagellar segments of A 2, (2) endopodite of U 3 just half the exopodite, (3) P 5–7 almost bare or with very scarce and short setae.

Etymology. The name sepidannus refers to the city of Sepidan, capital of Sepidan County, two kilometres from the type locality (Vezge-Morad spring).

Description. Male. Maximum body length (based on 38 individuals) 19 mm. Body slender; lateral cephalic lobes angular, although with rounded angles; anterior lower part extension of the head quite well developed; eyes medium-sized (the length of which equal to the diameter of the first segment of antenna 1), twice as long as wide, and reniform (Fig. 7 A).

Antenna 1: Short to rather long (ca. 1 / 3 rd– 2 / 3 rd of total body length); third peduncle segment shorter than the second and second is shorter than the first, groups of long setae on lateral mid-length of peduncle segments 2 (1–2 groups) and 3 (0–1 group), ca. equal to the diameter of the segment; main flagellum with 18–29 segments and very short setae; accessory flagellum with 2–3 segments (Fig. 7 B).

Antenna 2: Gland cones long, slightly longer than the third peduncle segment; peduncle segments 4 and 5 with the same lengths, armed with dense groups of long setae (three times the diameter of the same segments); flagellum with 11–14 segments, not swollen nor compressed; groups of setae on the dorsal tip, and also on the ventral and lateral faces of flagellar segments, longer than the length of the segments proximal to the flagellum, gradually become shorter on the distal end; setae on flagellum do not form a flag-like brush; no calceoli present (Fig. 7 C).

Mandible palp: First segment not armed; second segment with ventral setae, 2–6 shorter (as long as or a little longer than the width of the segment) separated setae at proximal and 7–12 longer (longer than twice the width of the segment) setae implanted very close together distally; inferior margin of the third segment armed with a comb-like row of 22–32 D-setae, 5–6 long E-setae, and two groups of B-setae (Fig. 7 E).

Labium: Simple, with a dense row of long setae on the mouth part's inner apex.

Maxilla 1: Long plumose setae on the inner basal lobe; outer lobe with 8–10 long stout serrate spines; an armature of 5–6 setae, sometimes with a spine, at the tip of the left palp (Fig. 7 G); right palp with 4–5 short and stout tooth-like spines at its distal margin, one separate seta on its distal outer angle, where in some individuals a spine might be implanted close to it (Fig. 7 H).

Maxillipedes: Exopodite with a row of three distal strong teeth, and three–five longer setae, a row of about 16 plumose setae inserted separately on the inner margin becoming longer proximally (Fig. 7 F); endopodite with a row of long setae on its distal margin, which gradually shorten toward interior: here starts another row of strong spine-teeth gradually shortening; a row of long setae at interior margin. Palp well developed.

Gnathopod 1: Coxal plate is slightly dilated distally, antero-distal corner with 2–6 and postero-distal corner with one short seatae; 0–1 fine setae at 1 / 4 th of postero-ventral surface of the plate; proximal 1 / 3 rd of basis expanded, gradually becomes narrower; carpal posterior margin with groups of strong plumose setae; pyriform propodus with an oblique palm armed with a medial palmar and a palmar angle spine, posterior margin with a row of four to five groups of small spines (each having 1–2 spine(s)), a row of short spines on the posterior sub-margin; one to three groups of setae at propodus anterior margin; a group of four setae very close to medial palmar spine; a row of three groups of short setae on palmar surface; dactylus long ( Fig. 8 View FIGURE 8 A).

Gnathopod 2: Distal part of coxal plate narrower than proximal, three short setae on antero-distal corner and one on postero-distal, a longer setae on the posterior distal surface may be present; palm is oblique with a robust medial palmar and 3 palmar angle spines, three short spines behind them; a group of setae close to the medial palmar spine, two-three groups of setae at propodus anterior margin ( Fig. 8 View FIGURE 8 B).

Pereopod 4: Coxal plate expanded at postero-distal half, with 3 small setae implanted at the antero-distal and 7–9 at the postero-distal corner. Similar to pereopod 3, merus on anterior margin with only one mixed group of short setae and a shorter spine; another group of several longer setae and two long spines at the anterior tip ( Fig. 8 View FIGURE 8 D).

Uropod 3: Endopodite half the length of the exopodite (Mean = 0.52, SD = 0.03); length of setae on both rami about twice the width of the part of the segment they are implanted; many setae on outer margin of both exopodite and endopodite are plumose ( Fig. 9 View FIGURE 9 G).

Epimeral plates: Plate 1 rounded with a small incision on posterior and 7–8 long setae on antero-distal corner, postero-inferior corner of EP 2 and EP 3 weekly to moderately pointed, a row of 3–5 very short and fine setae on posterior margin of all three plates; a combination of 2–4 spines and short setae on distal submarginal area of the second and third plate ( Fig. 9 View FIGURE 9 E).

Telson: Length of the lobe about twice the widest width; one to two long and robust spine(s) and some 1–6 long setae on the distal margin, length of which is 80–90 percent of the whole length of the telson; one to four groups of setae (1–2 each) on dorsal surface of the lobes, sometimes accompanied by another long spine (Fig. 7 I).

Urosomites: Postero-dorsal without obvious elevations, but each epimere is placed in a distinctly lower level than the anterior segment; dorsal armature consists of mainly 1–2 short setae mixed with 2 spines on laterals and mid-dorsal ( Fig. 9 View FIGURE 9 D).

- Propodus of gnathopod 2 with two long palmar angle spines, a group of setae at medial palmar region, no

- Proximal of bases of gnathopod 1 and 2 are not wider than their distal part.

- Basis of pereopods 5–7 less elongated than males, a rather distinct convex angle at the middle of posterior

Discussion. This species shows a series of quite clear differences from the sympatric species G. zagrosensis . The most important include: a slender vs. robust body; much longer setae on peduncle and flagellum of A 2; longer antennal gland cone (reaching to the tip of the next segment or slightly longer); setation of P 5–7, which is more convenient in P 7 as very rare and short setae; well-developed postero-inferior lobe of P 6–7 bases, no long setae on the postero-inferior corner, clearly different ratios of endopodite/ exopodite (0.5 vs. 0.7), no long spines and setae on inferior sub-margin of EP 2–3; dorsal of urosomites not elevated in G. sepidannus , moderately elevated in G. zagrosensis ; posterior dorsal margin of the last three epimeres smooth, having a group of fine bristles in G. zagrosensis . There also is seen a wider part in the middle of the first oostegite of G. zagrosensis , not in G. sepidannus ( Figs. 5 View FIGURE 5 E & 10 E).

There are not many taxa that the new species can be confused with, but it has characters in common with some other taxa. These similarities are discussed below.

G. pseudosyriacus , which is a widespread species in Fars region, has some features in common with G. sepidannus like no setation on pereopods and the same size of antennal gland cone. On the other hand it differs from G. sepidannus in having a larger eye, very short setae on A 2 peduncle and flagellum, calceoli, a higher ratio of U 3 endo-/exopodite and a distinct dorsal elevation on urosomes.

G. k o m a re k i Schaeferna, 1922 is widely distributed in the Northern regions of the country. It has some similarities to G. sepidannus , like long setae on A 2 and shape of basis in P 5–7, but differs in poor setation of A 1, a short gland cone, and in slightly swollen and dorsoventrally flattened flagellar segments of A2, 40 Dsetae on mandibular palp, many longer setae on P 5 –P 7, higher ratio of U 3 endo-/exopodite, and short setation of telson.

G. crinicaudatus , previously reported from a close region, can be easily distinguished by having a short antennal gland cone, a higher U 3 endo-/exopodite ratio, less setiferous A 2 and possibly A 1, and generally more setation everywhere, including P 5–7, dorsal of urosomes, and telson. In addition, G. crinicaudatus MnPl shows shorter distal setae on 2 nd and 3 rd segment, and setae on the second segment of MnPl are arranged in two distinctly separated groups of longer distal and shorter proximal, while no such clear division in G. sepidannus exist.

G. gracilis ( Martynov, 1935, Figs. 15-20) occurring in Karatau Mountains (Southern Kazakhstan) is similar to G. sepidannus in having long setae on peduncle and flagellum of A 2, similar armature of pereopods and richly setose U 3 with similar ratio of endo-/exopodite. It differs clearly in having not extended, blunt lower part of the head, poor setation of A 1 peduncle, GP 2 palm with shorter setation as well as different shape and arrangement of medial and palmar spines, lacking a postero-inferior protruding lobe of P 7 basis, and less setose but more spiny telson.

Cuticular ultra-structure study in the head region has also shown differences between G. sepidannus and its related species. In contrast to G. bakhteyaricus and G. balutchi (S-type), and G. lordeganensis and G. lobifer (L-type), this species shows both pore arrangement types, hence being closer to G. zagrosensis . Pore density are measured to be higher (39–56 pores per 25 µm 2 in L-type and 81–163 pores per 25 µm 2 in S-type) in G. sepidannus compared with G. lordeganensis (18–20) and G. bakhteyaricus (45–50); this number is not reported for the other two species, but from the photographs it is obvious that G. balutchi has even much less pores per unit area (counted 5–6 pores per 25 µm 2 from the original photograph, Khalaji-Pirbalouty & Sari 2006; Fig. 4 View FIGURE 4 B). Gammarus lobifer represents ca. 60 pores per 25 µm 2 in the sample photograph (Khalaji- Pirbalouty & Sari, 2006; Fig. 4 View FIGURE 4 F).

Additionally, there are clear differences between G. zagrosensis and G. sepidannus regarding HC cuticular polygons' pore arrangements. Although both species showed L- and S-types, the distances between lines in the L-type polygons were less in G. z a g ro s e n s i s than in G. sepidannus ( Fig. 6 View FIGURE 6 ). Density of pores in G. zagrosensis in both L-type and S-type polygons were higher than G. sepidannus . Therefore, it can be said that ultra-structural differences are extra-supports here for separating these two sympatric species, as strong as what was previously shown by other researchers. 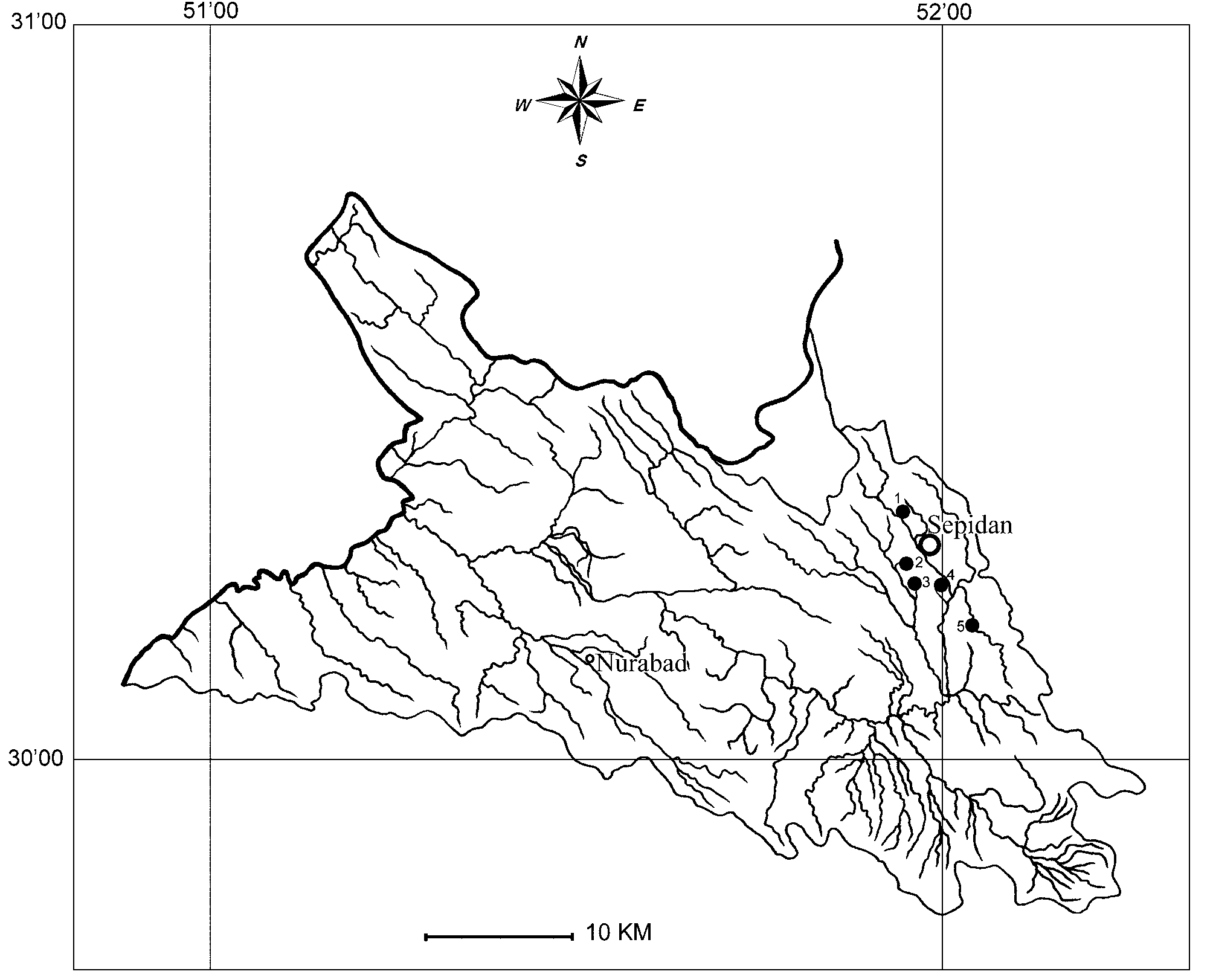 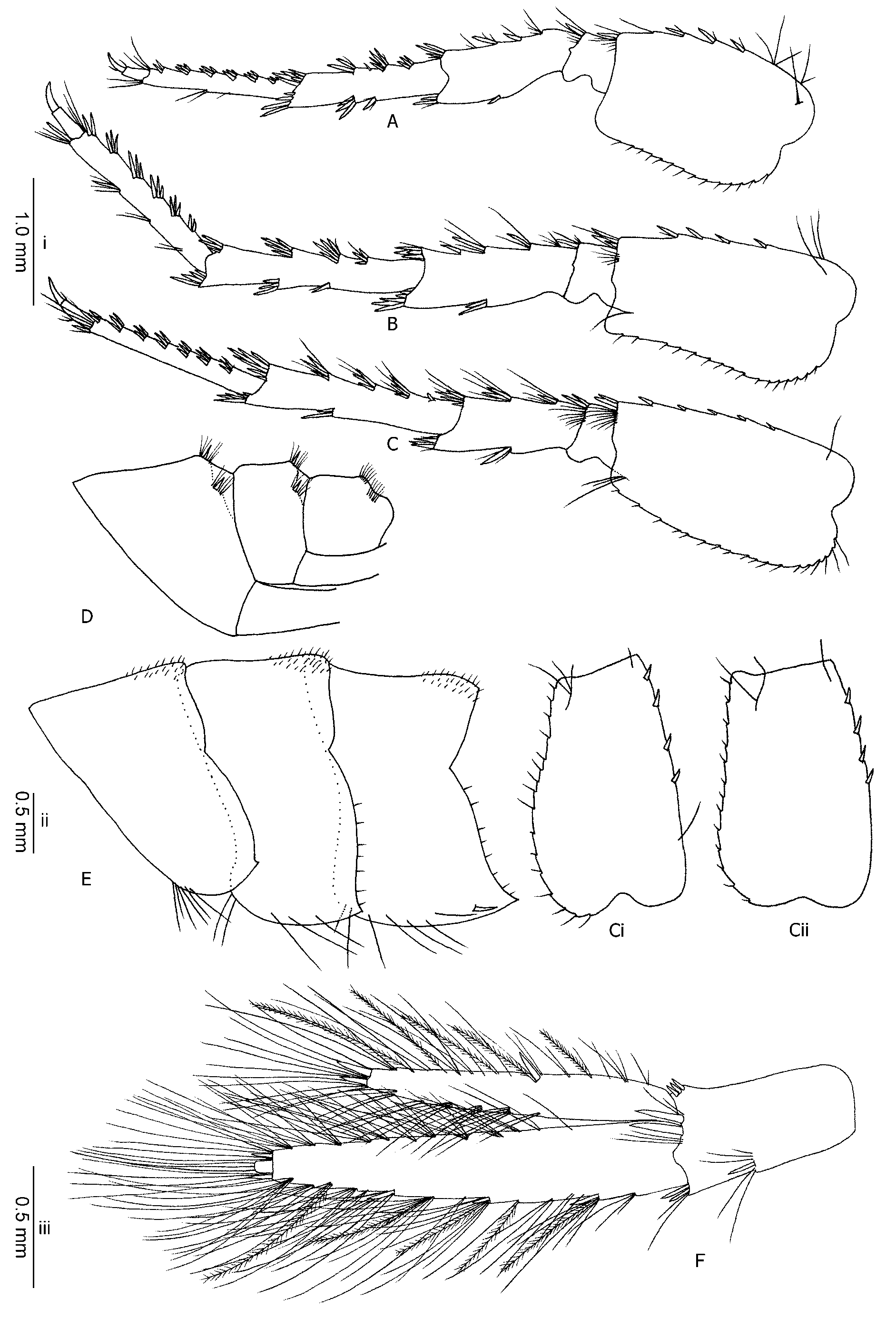 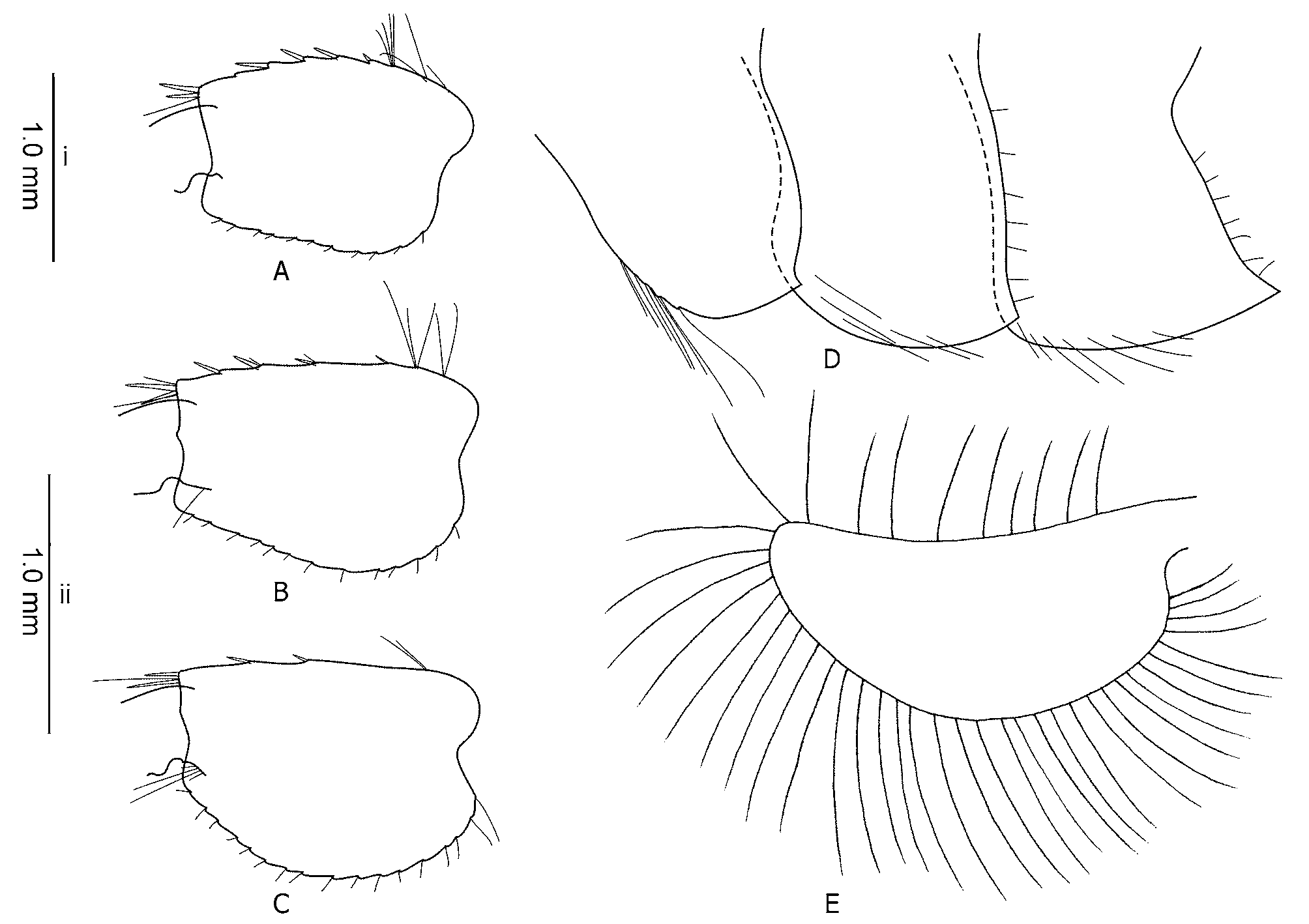 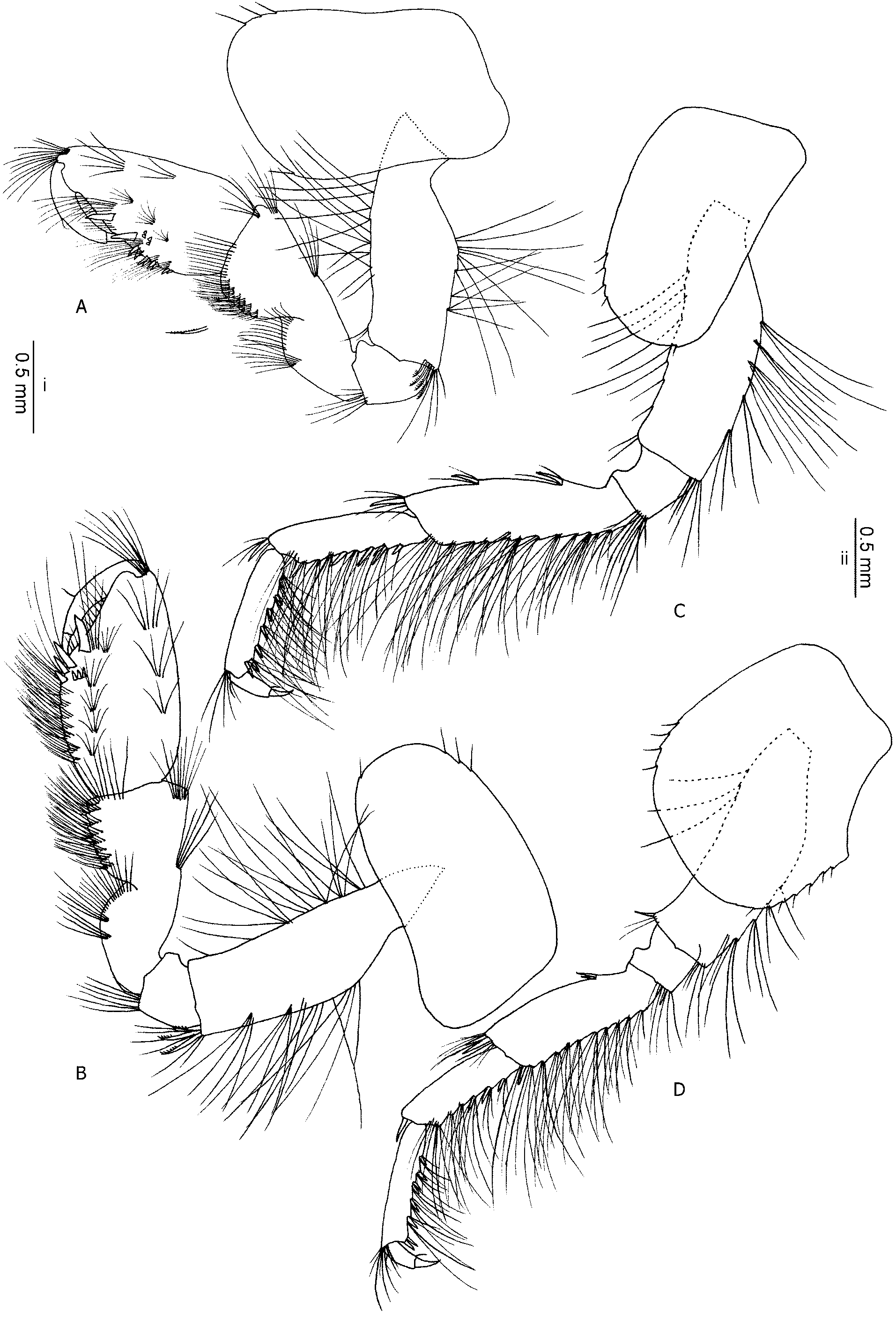 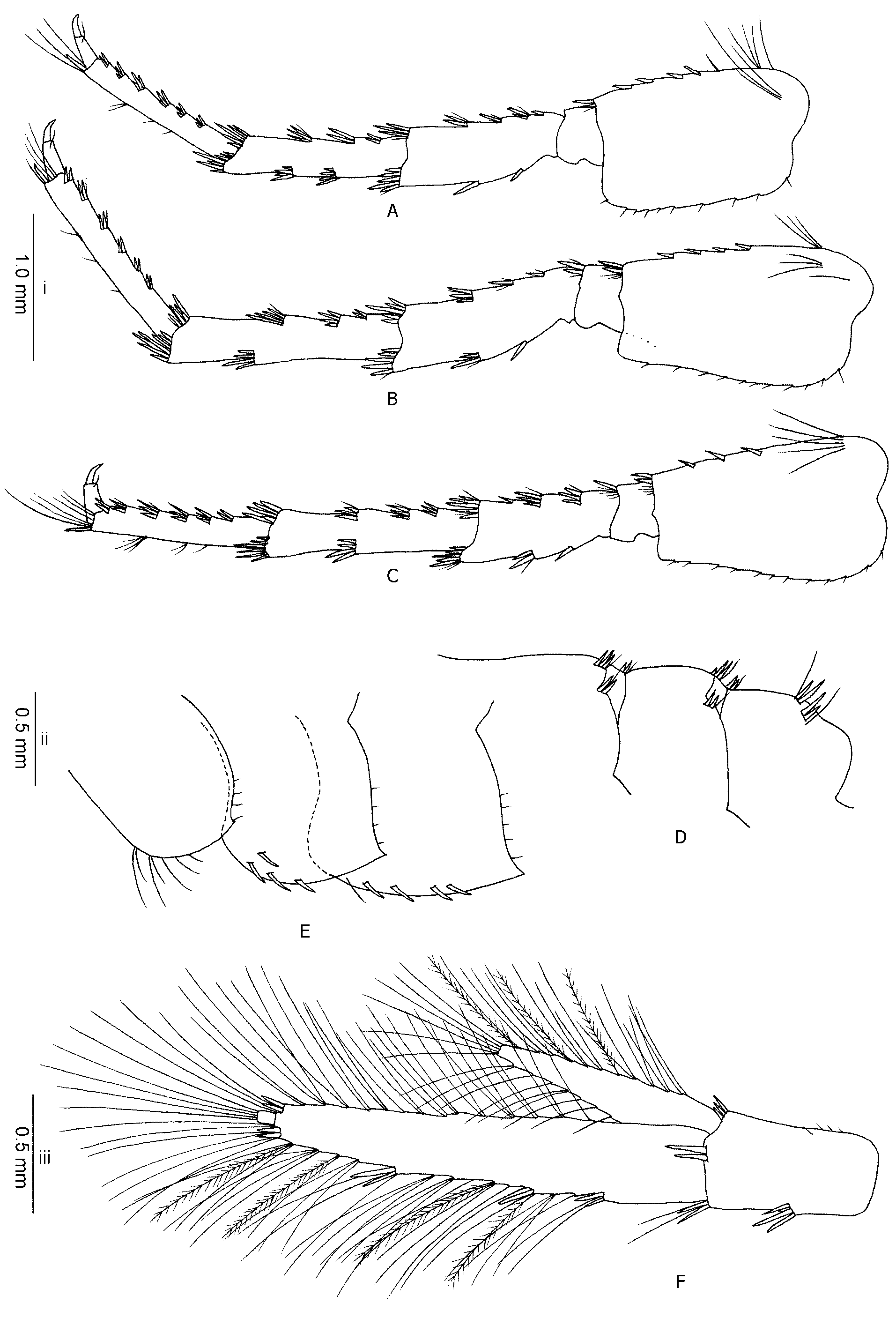