Diagnosis. Incrusting to massive amorphous, yellow sponge, with a firm, fleshy and compressible consistency. Surface is smooth to irregular conulose-microconulose. The choanosome has abundant collagen and a confused skeleton, with ascending single spicules or tracts, ending at the surface commonly in bouquets or single spicules causing a fine hispidation. The spicules are oxeas and derivates (stylotes and strongyles) in a wide size-range, from 200 –(546)– 780 µm long by 3 –(8.7)– 15 µm wide.

Description. Incrusting cushion-shaped to massive amorphous (from 3 to 5 cm thick), sometimes lobate sponge, with rounded borders and apical oscules ( Fig. 2 View FIGURE 2 A–C). The species grows over rocky substrates, covering areas up to 17 x 12 cm. The surface varies within the same specimens; it can be smooth, although generally, it is irregular, conulose-micro-conulose and minutely hispid, due to the terminal part of the choanosomal spicule and tracts that form brushes on the surface ( Fig. 3 View FIGURE 3 A–G). Sometimes small raised ridges may be observed running over the surface. Subectosomal spaces from 0.5 to 1 mm in diameter. Subectosomal aquiferous canals (from 0.5 to 1.5 mm in diameter) are visible around some oscula. Circular or oval shaped oscula (1 to 6 mm in diameter) are scattered irregularly on the surface. They are flush with the surface of the sponge or slightly elevated by an ectosomal membrane. The consistency is firm, fleshy, compressible and resilient in life, but crumbly after preservation. The ectosome is a thin, translucent, partly detachable surface membrane. The choanosome is cavernous, with aquiferous channels very variable in size, from 70 µm to 1.5 mm in diameter. The color in life is light yellow-orange ( Fig. 2 View FIGURE 2 A–C). After fixation, the color becomes ochre or dark brown.

Skeleton. Ectosome without a specialized skeleton, but with some spicules from peripheral choanosomal skeleton arranged criss-cross or paratangentially, protruding through the surface ( Fig. 3 View FIGURE 3 ). The subectosomal region is characterized by dense collagen with ascending single spicules or tracts and only few small sub-ectosomal channels ( Fig. 4 View FIGURE 4 ). The deeper choanosomal region is very cavernous, with abundant spongin as a collagen matrix. Skeletal arrangement is confused with ascending single spicules or grouped in tracts, becoming slightly more organized towards the periphery ( Fig. 4 View FIGURE 4 ).

Spicules. The spicules are mainly oxeas, but derivatives like styles are commonly present. They are large and thin, lightly curved at the centre, or even flexuous. With symmetrical or asymmetrical ends and very variable tips; sharp, mucronate, stepped and blunt tips ( Fig. 5 View FIGURE 5 ). Spicules are present in a wide range of sizes but not divided into categories. Measurements: 200 –(546)– 780 µm long and 3 –(8.7)– 15 µm wide.

Etymology. The specific epithet refers to Isla Isabel National Park where the specimens were collected.

Distribution. Even though a great number of localities have been sampled along the Mexican Pacific coast during the last 8 years (see papers by Carballo et al.), Axinyssa isabela   sp. nov. was only found at the National Park Isla Isabel (Nayarit, Mexican Pacific coast). The species is relatively common in vertical walls, small caves and overhangs at depths between 4 and 28 m at different localities of the island ( Fig. 1 View FIGURE 1 ).

Remarks. Axinyssa isabela   sp. nov. is a common sponge at Isla Isabel (Mexican Pacific coast), and constitutes the first record of Axinyssa   for the East Pacific region. This species has characteristics typical of Axinyssa   according to the most recent definition (Erpenbeck & van Soest 2002), and it also contains typical chemical compounds of this genus ( Zubía et al., 2008).

The closest species to Axinyssa isabela   sp. nov. is A. ambrosia   (de Laubenfels, 1936) described from the Dry Tortugas (Caribbean), and later reported widespread in the Caribbean ( Diaz et al. 1993). Both species are quite similar but subtle morphological differences are present. A. isabela   sp. nov. has a thin, translucent, partly detachable membranous layer, which is not present in A. ambrosia   . The choanosome is also different, A.

ambrosia   presents a skeleton with spicules densely strewn in the interior. Toward the periphery this species exhibits radial tracts no longer than 2 to 3 spicule lengths, ending as small conules on the surface. On the other hand, A. isabela   sp. nov. has a cavernous choanosome with spicules ascending singly or in tracts, becoming slightly more organized towards the periphery, with abundant collagen and relatively low spicular density. Both species also differ in spicule symmetry and dimensions. A. ambrosia   presents fusiform and hastate oxeas, with transitional styloids and strongyloxeas. These are longer and thicker (from 425 to 925 µm long, and from 8 to 30 µm thick) than those seen in A. isabela   sp. nov. The latter species presents thin, slightly curved or flexuous oxeas, with symmetrical or asymmetrical ends. Although the similarities between both species are high, we do not consider these species conspecific because of large differences in geographic distance and habitat ( Diaz et al. 1993). In addition, we have found consistent morphological differences in skeletal organization and symmetry, as well as regarding the size of spicules, and natural products composition ( Zubía et al. 2008).

In fact, the levels of genetic differentiation found between an amphi-isthmic Spirastrella   sibling pair, together with cytological and small but consistent morphological differences, clearly demonstrated that they belong to different biological species ( Wulff 1996, Boury-Esnault et al, 1999). M. microsigmatosa (Carribean)   and Mycale cecilia   (Pacific Ocean) is another example of a trans-Isthmian species pair. They are two morphologically similar species, which were synonymized by Bergquist (1965), and later suggested as valid species on the basis of their geographical separation and small differences in spicule dimensions ( Hajdu & Rützler, 1998).

The closest sponge in the East Pacific ocean is Oxeostilon fernaldi ( Sim & Bakus 1986)   (now in Topsentia   according to Erpenbeck & van Soest (2002). Both species are incrusting to massive yellow sponges, but Topsentia fernaldi   has a dense and confused choanosomal skeleton and a compact ectosomal crust of oxeas, both with little spongin. In addition T. fernaldi   has two size categories of oxeas, which differ in form and size from A. isabela   sp. nov. spicules.

Axinyssa isabela   sp. nov. is also different from other Caribbean species such as A. flaveolivescens Hofman & Kielman, 1992   , and A. lithophaga ( Wiedenmayer, 1977)   . A flaveolivescens   is described as an endolithic bright yellow sponge, which has large protrusions that emerge from dead coral. This species is clearly different from our species in external morphology and in the smaller size range of spicules ( Table 1 View TABLE 1 ). A. lithophaga   differs from A. isabela   sp. nov. by having a purplish black external color and different spicule size and morphology, with fusiform oxeas and strongyloxeas, but true oxeas are rare. Large ones are larger than A. isabela   sp. nov. spicules (230–1320 by 2–25 µm). 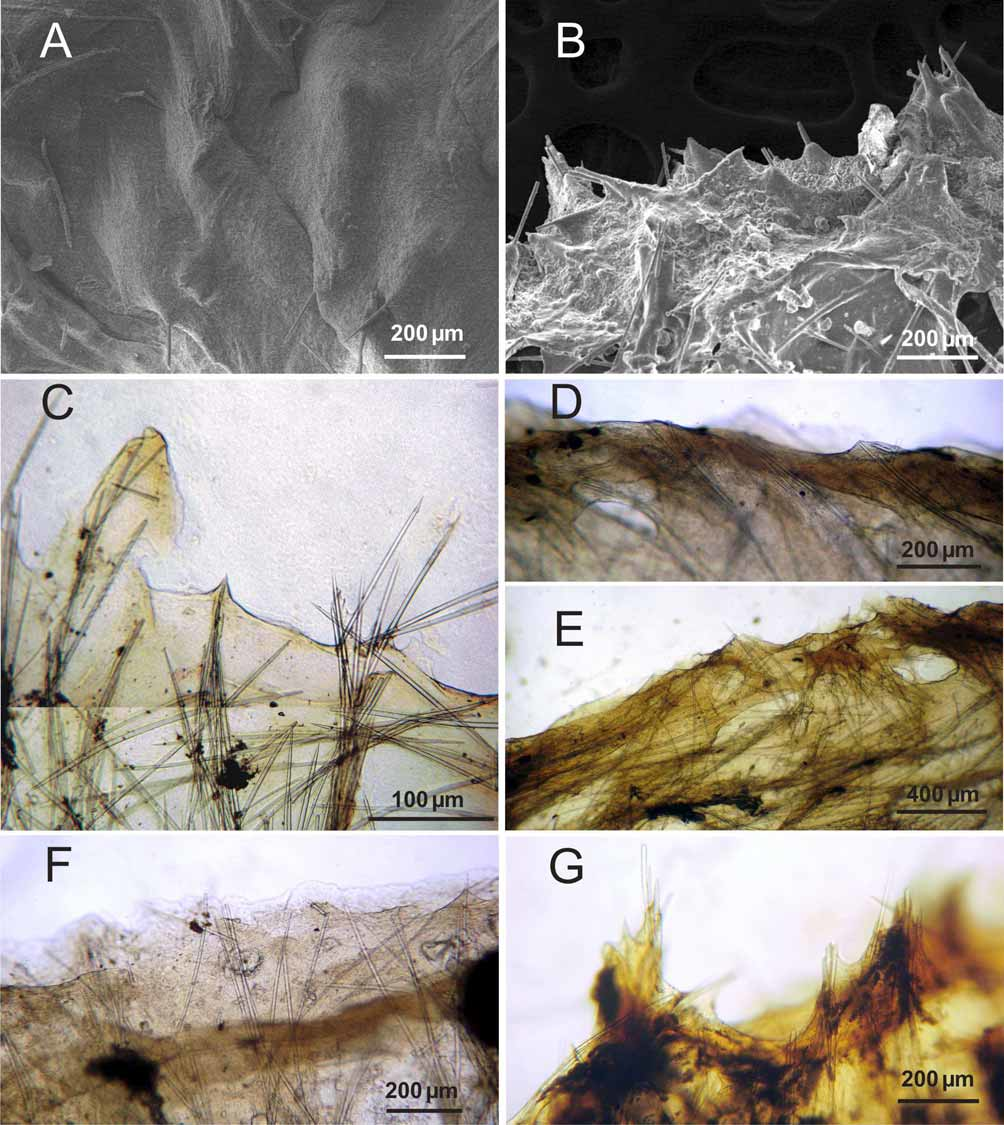 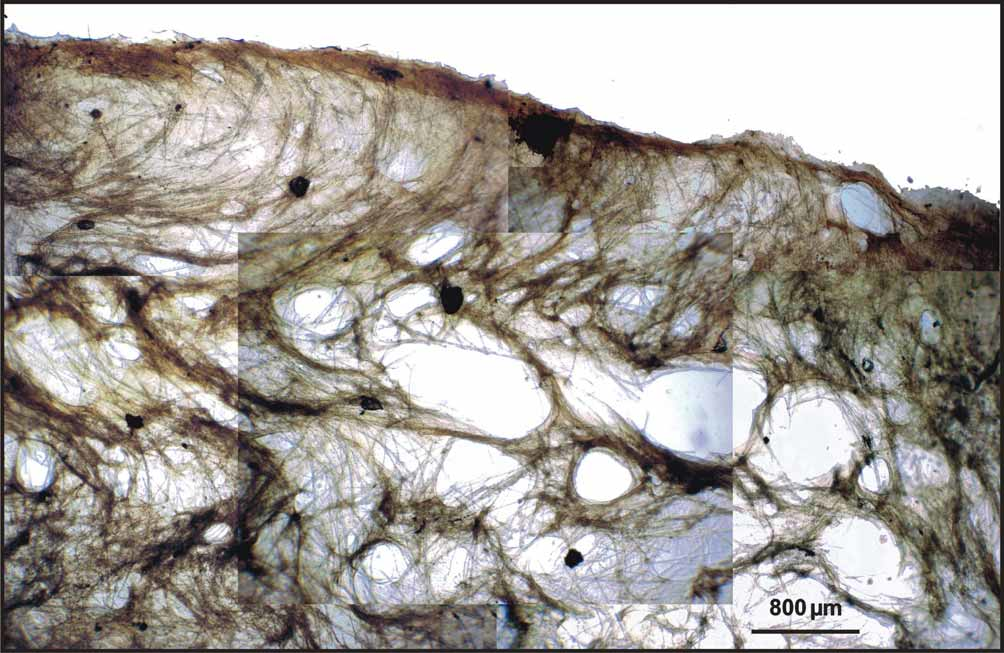