Etymology. From the Latin australis  for ‘southern’, in reference to the fact that this species occurs in the southern half of the Wet Tropics region. The epithet is to be treated as a noun in apposition.

Measurements of live individuals. Table 2 presents measurements for 288 males and 8 females in the field.

Colour pattern in life. Dorsal pattern highly variable. There are three broad morphs: (1) ‘mottled’— irregular dark markings on an uneven pale, orange or brown background; consistent dark markings being a dark W-shaped mark in the scapular region, an irregular dark bar across the top of the head between the eyes and a dark mark associated with pale lumbar ocelli, (2) ‘broad band’—a broad cream or yellow vertebral band bordered with black on a brown or dark background, and (3) ‘vertebral line’—a very thin cream or yellow vertebral line on an uneven brown or dark background, usually with accompanying thin line along hindlimbs. The first morph (mottled) is the most common but individuals with vertebral bands are present in most populations. Dorsal markings found on all morphs include pale or yellow lumbar ocelli and a paler triangle on the snout. Dorsal surfaces of limbs mottled with grey, brown or black. Forelimbs usually irregularly marked with orange or yellow, with similar colouration sometimes also present on ankles often similarily tinged. Dorsal colouration merges to white, cream or grey on flanks. Consistent lateral markings include an irregular dark line from nare through eye and along supra-tympanic fold, and a dark irregular bar above the axilla. Groin and posterior thigh similar pale or grey colouration to flanks and with grey mottling. Ventral surfaces usually evenly white, cream, grey or light brown, but sometimes flecked or mottled with darker markings. Iris heavily flecked with gold and pupil often bordered with a red or copper line. No sexual dimorphism in colour pattern evident.

Call. A finely pulsed ‘beep’ ( Fig. 3 AView FIGURE 3. A) of the characteristics outlined in Table 2.

Comparison. Only likely to be confused with other rainforest microhylids. Cophixalus australis  sp. nov. can be distinguished from these species (except C. ornatus  and C. hinchinbrookensis  sp. nov.) by the presence of large, truncated finger pads and by the mating call, which is a finely-pulsed ‘beep’ rather than a call with obvious pulses or notes. Cophixalus australis  sp. nov. is phenotypically similar to C. ornatus  and C. hinchinbrookensis  sp. nov.. There are multivariate differences in mating call and morphology between these three species (Hoskin et al. 2011) but they cannot be identified based on any single known phenotypic trait in the field ( Table 2). Colouration and pattern are highly variable within each of these three species. The only difference detected so far is that C. ornatus  typically has a yellow wash to the groin and posterior thigh ( Fig. 2View FIGURE 2 F), which is generally absent in the other two species. The three species can be reliably identified by genetics, representing divergent monophyletic lineages for both mtDNA and nDNA loci (Hoskin et al. 2011). For 16 S mtDNA, the SNPs presented in Table 3 and the GenBank sequences listed below can be used for identification. The three species can be identified in the field based on locality, except at sites within the narrow contact zone between C. australis  sp. nov. and C. ornatus  in the central Wet Tropics ( Fig. 1View FIGURE 1; Table 1).

Habitat and habits. Cophixalus australis  sp. nov. inhabits rainforest. It also occurs in montane heath and boulder fields where these occur among rainforest, and in some areas it occurs in wet sclerophyll forest adjacent to rainforest. Males call during and following wet weather. Males call from elevated postions (0.3–3 m above the ground) such as on stems and trunks, among foliage and dead vegetation caught amongst foliage, palm axils, tree hollows and among rocks. The most common calling position is facing head upwards on a vertical stem approximately 0.5–1.5 m off the ground. Females are rarely encountered at night. When a female approaches a calling male, he changes his call to a courtship call (a shorter, higher pitched call) and leads the female to a nest chamber in the earth, under a rock, or in a hollow in a rotten log or stem ( Zweifel 1985; Hoskin 2004; Felton et al. 2006). Similar behaviour has been observed in Cophixalus kulakula  ( Hoskin & Aland 2011). Mate choice in C. australis  sp. nov. is believed to involve multiple steps: male call, male leading and nest quality ( Felton et al. 2006). As for other Australian microhylids ( Zweifel 1985; Hoskin 2004), C. australis  sp. nov. is a terrestrial breeder, with small clutches of large eggs. A clutch of 15 unpigmented eggs has been found under leaf litter in a tree hole, and was attended by a male (Hoskin 2004). Cophixalus australis  sp. nov. is an abundant frog throughout its range. 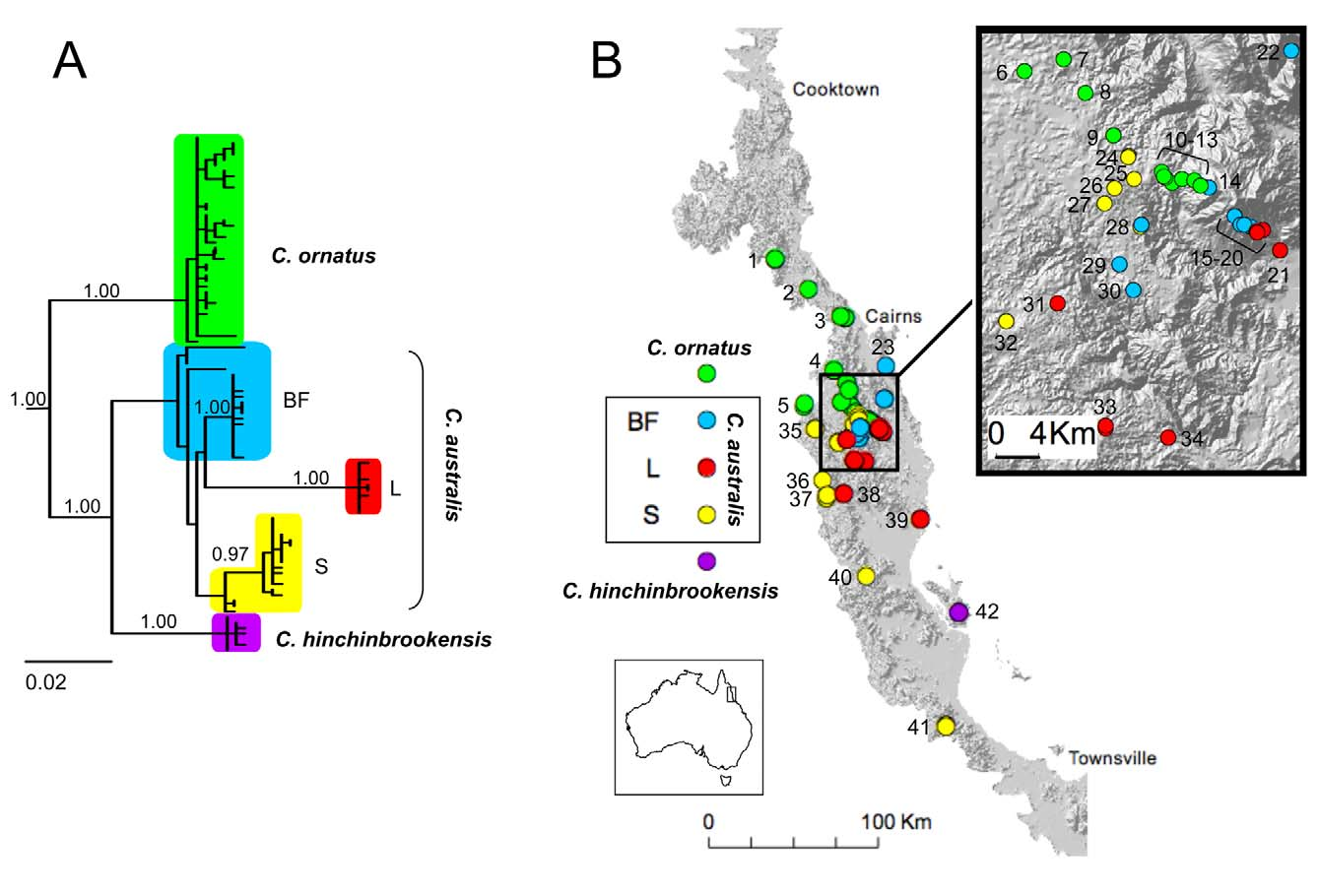 FIGURE 1. Phylogeny (A) and distributions (B) of C. australis sp. nov., C. hinchinbrookensis sp. nov. and C. ornatus. (A) Maximum likelihood tree constructed from 513 bp 16 S mtDNA. The phylogeny shows the relationship between C. ornatus, C. australis sp. nov. and C. hinchinbrookensis sp. nov. The tree also shows the three subgroups within C. australis sp. nov.: Mt Bartle Frere region (BF), Lowland (L) and Southern (S). Numbers at major nodes are Bayesian posterior probabilities. (B) Map of the Wet Tropics region of north-east Australia and an enlargement of the Atherton Tablelands-Mt Bartle Frere region. The coloured dots show the most common mtDNA lineage at each site, with dot colour matching the phylogeny. The site numbers match the locality details in Table 1. This figure is modified from Figs 3 and C 1 in Hoskin et al. (2011). 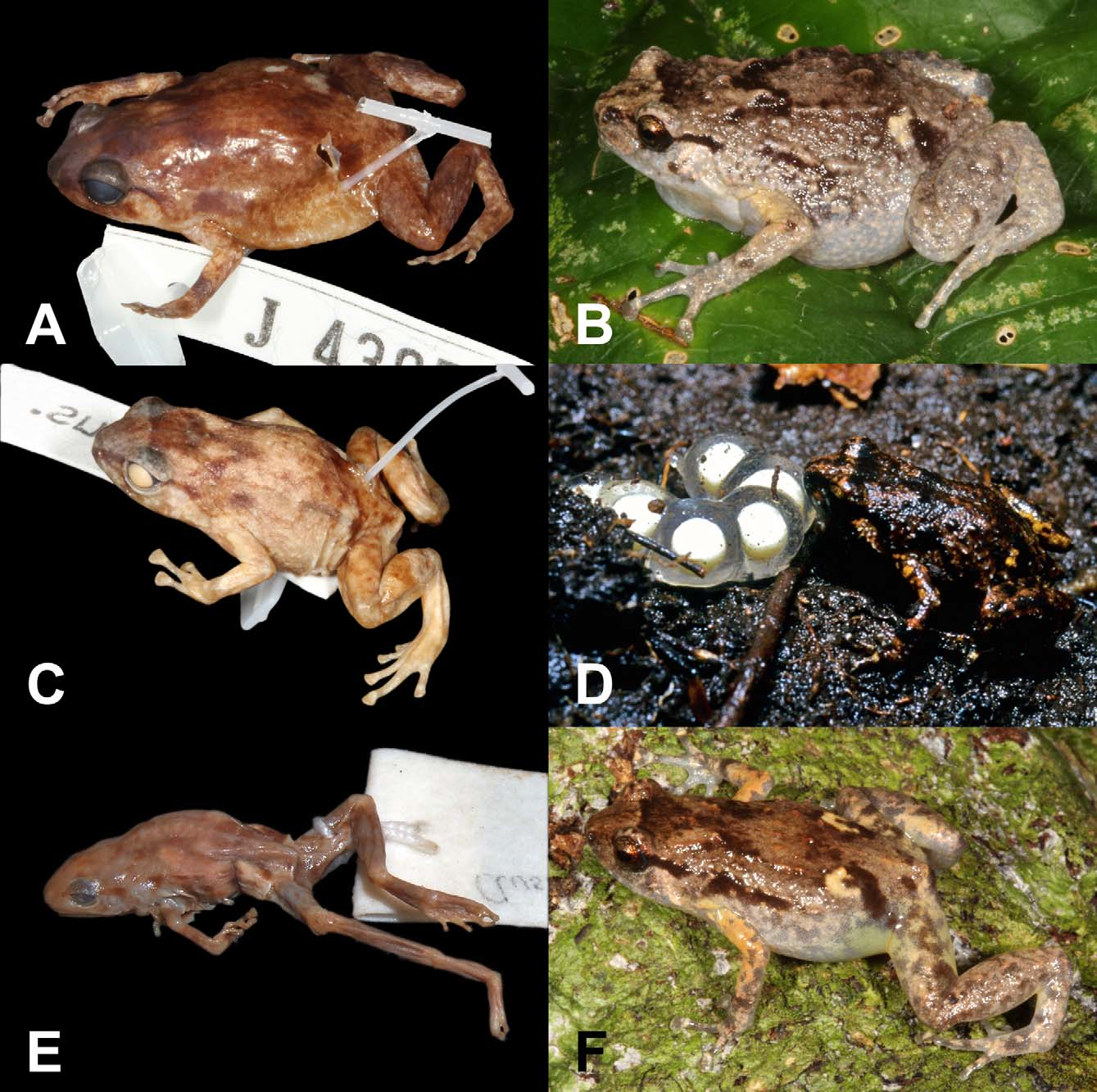