Etymology. From the Latin “ pauci ” for a small number, and “ torum ” for protuberances, alluding to the relatively low number of tubercles on the dorsal surface of the cheliped dactylus.

Remarks. The proportionately more slender ambulatory legs and relatively small number of dactylar tubercles on the cheliped places this species closest to Parasesarma leptosoma ( Hilgendorf, 1869)  . In the latter species, however, the ambulatory dactylus is short, being only about a third of the length of the propodus, while in P. paucitorum  n. sp. the dactylus is only slightly shorter than the propodus ( Figs. 1View FIGURE 1 A, B, 3 A). The shape of the male dactylar tubercles is also quite different. Parasesarma paucitorum  n. sp. has asymmetrical tubercles, the proximal part being lower than the distal ( Fig. 3View FIGURE 3 E) while P. leptosoma  has symmetrical ones.

Parasesarma leptosoma  has long been characterized by its very short ambulatory dactylus, which is only one-third the length of the propodus. The ZRC lots identified as P. leptosoma  show this character and superficially resemble each other. It was noted, however, that the specimens from Kenya, Peninsular Malaysia, Papua ( Indonesia) and Guam all differ from each other in the form of the carapace, structure of the dactylar tubercles and G 1 form, suggesting that what is presently known as P. leptosoma  is actually a complex of several species. Clearly, a revision of P. leptosoma  is necessary. One subjective junior synonym of the species, Sesarma (Holometopus) limbense Rathbun, 1914  (see Ng et al. 2008), described from the Philippines, will also need to be examined. This exercise, however, is outside the scope of the present investigation. With regards to P. paucitorum  n. sp., however, all the discussed differences still apply.

The only female specimen of P. paucitorum  n. sp. is differs slightly from the two smaller males in being generally darker in coloration, the ambulatory meri and propodi are relatively longer, with the postfrontal crests somewhat stronger and the frontal margin less convex. These differences can be explained by its large size.

Parasesarma paucitorum  n. sp. was collected from muddy substrates in a coastal mangrove forest with mostly freshwater influence. The crabs were found in burrows dug under rocks and were active only at night. Sesarmids collected with it include Bresedium philippinense ( Rathbun, 1914)  , Labuanium trapezoideum (H. Milne Edwards, 1837)  , Sesarmops mindanaoensis ( Rathbun, 1914)  and Sesarmops impressus (H. Milne Edwards, 1837)  .

Distribution. So far only known from northern Sulawesi, Indonesia. 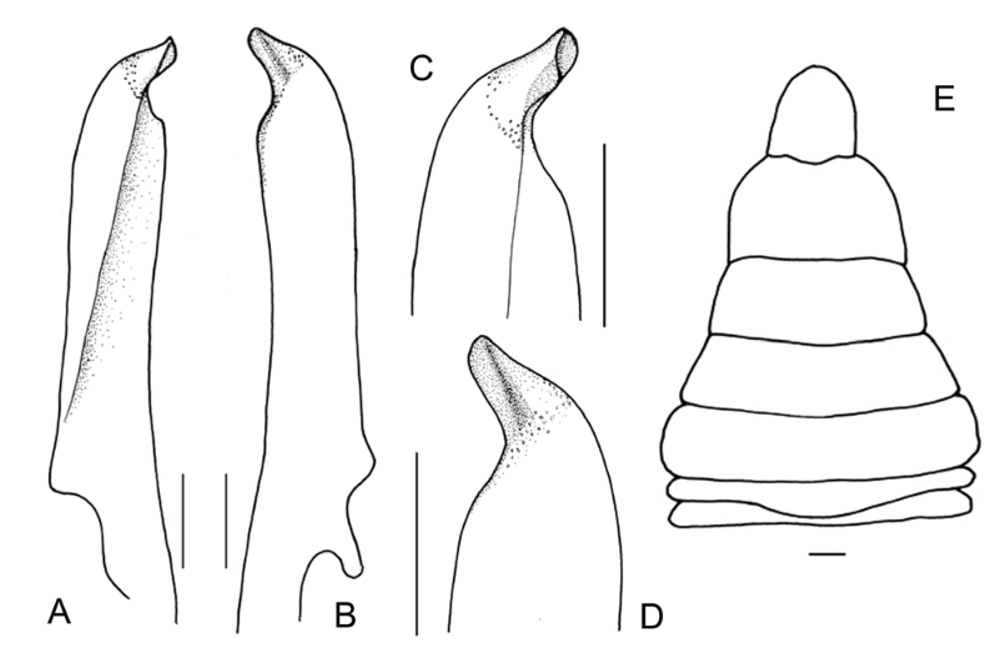