Abdomen ( Fig. 13View FIGURE 13 a) with sixth somite 1.35–1.5 times as long as fifth, with sharp pre-anal carina; pleuron of fourth somite rounded posteroventrally and that of fifth angulated: first 3 sternal plates each with well developed median tooth. Telson 1.35–1.6 times as long as sixth abdominal somite, posterior end triangular, with 2 pairs of ordinary sub-terminal spines, of which lateral pair much smaller than mesial pair, 2 pairs of dorsolateral spines present, anterior pair of which placed near mid-length.

First pereopods overreaching antennal scale by distal one-third of carpus and onward, fingers as long as or slightly shorter than palm. Second pereopods ( Fig. 13View FIGURE 13 a, d –i) in adult males distinctly unequal in size, somewhat dissimilar in shape, palm and fingers commonly covered with velvety setae on both sides: major pereopod extending fully beyond antennal scale by chela, and its length sub-equal or slightly shorter than total body length; merus inflated at mid-length, about twice length of carpus, with scattered small spinules on distolateral part and occasionally with velvety setae on mesial margin; carpus nearly cup-shaped, about 1.5 times or slightly more than its maximum height, occasionally covered with velvety setae on distal and distolateral parts; palm slightly inflated, as long as or slightly longer than merus; fingers not gaped when closed, 0.55–0.85 times as long as palm (proportionately longer in females), with 9–14 teeth on cutting edges; minor leg extending fully beyond antennal scale by chela; merus slightly longer than palm, latter as long as fingers, often bearing velvety setae on ventral margins but setae occasionally sparse or even absent (setae usually absent in females); ischium with or without velvety setae on ventral margin. Third pereopod ( Fig. 13View FIGURE 13 j) slightly extending beyond antennal scale, propodus 2.5–3.1 times as long as dactylus, armed with 4 or 5 spines on ventral margin; dactylus moderately robust, anterior margin with a row of stout setae and also ventral margin with a few sets of setae.

Remarks. Previous researchers (Naiyanetr 2001; Cai et al. 2004) have stressed, on the basis of Thai  specimens, that this species has velvety setae on the ventral margin of the merus of the second pereopods. In our specimens, however, this feature showed considerable variation from one specimen to another from complete absence to dense setae (see Fig. 13View FIGURE 13 g –i), and females usually did not have setae on the merus and ischium. The number of teeth on the cutting edges of the fingers was slightly larger in Laotian specimens than in those reported in Thailand (9–14 vs. 8–10 teeth). However, we do not regard these differences as significant at species level.

Macrobrachium sirindhorn  belongs to the “ M. pilimanus (De Man, 1879)  ” species group, in which 16 species have been recognised to date (Cai et al. 2004; Wowor & Short 2007). Morphologically, M. sirindhorn  shows close resemblance to M. hirsutimanus ( Tiwari, 1952)  , which is known from Myanmar and Thailand (Cai et al. 2004). According to the published data, this species distinctively differs from the latter by the possession of a tri-lobed epistome instead of a bi-lobed one (see Cai et al. 2004). Moreover, this species differs from M. hirsutimanus  in the following specific features: 1) the propodus of the third pereopod of M. sirindhorn  is proportionately longer than M. hirsutimanus  (0.25–0.31 times of dactylus vs. 0.20–0.25); 2) posterior margin of the dactylus with a few tufts of setae as opposed to a naked one; 3) cutting edges of the fingers of the second pereopods bear smaller number of teeth (<10 vs.> 10). These differences are minor but may warrant the distinction between the two populations.

Our preliminary analysis of the mitochondrial gene (16 S rRNA) has demonstrated that M. sirindhorn  forms a distinct clade from M. amplimanus  , M. dienbienphuense  , and M. eriocheirum  by the presence of substantial substitutions in several nucleotides (Imai et al. unpubl. data).

Of 20 specimens examined, 25 % of them were right-handed (right second pereopod larger than left one) (Hanamura et al. unpubl. data).

Distribution. Macrobrachium sirindhorn  has been recorded from northern Thailand (Cai et al. 2004). This species was commonly captured from several streams around Vang Vieng in central Laos. 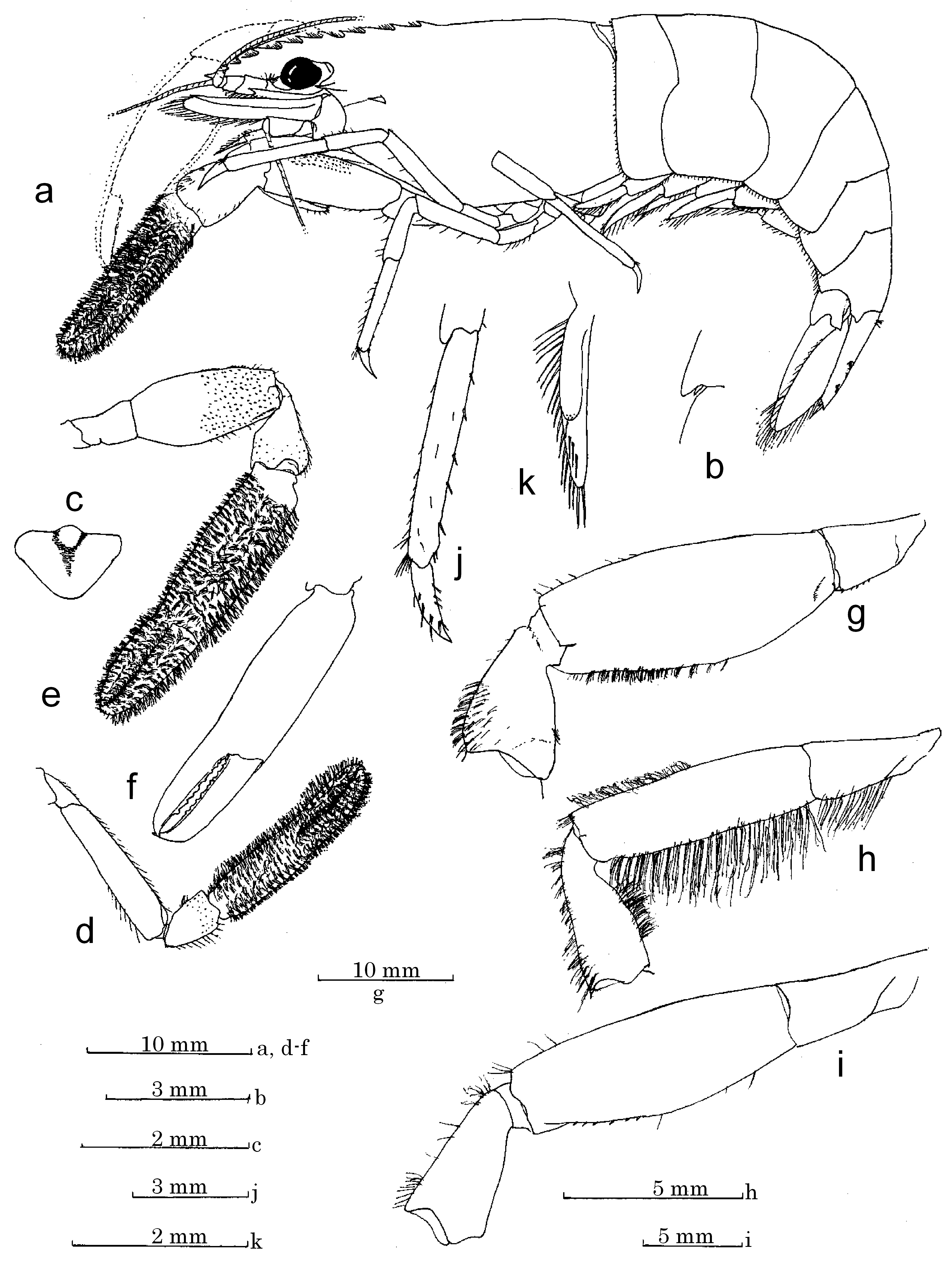